How Will Asset Monetisation Help the Government?

Net net, the asset monetisation plan will not result in any additions to gross domestic savings in the economy. 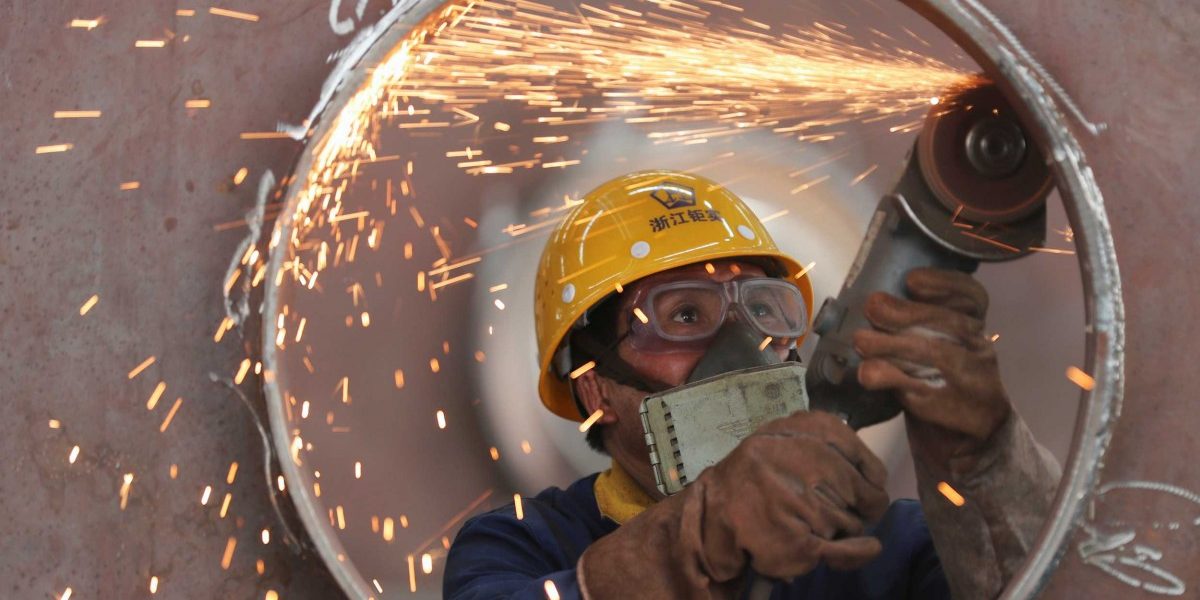 An employee works on a production line manufacturing steel structures at a factory in Huzhou, Zhejiang province, China May 17, 2020. Photo: China Daily via Reuters

The Union government  has announced its intention to “monetise” about Rs 6 trillion worth of assets held by it, and public sector units (PSUs). It has said that it will “monetise” by letting the private sector bid for operating such assets for 25 years, for a lump sum payment upfront, but without giving away title to the underlying assets.

In effect, the government is telling private operators that here is this road, godown, pipeline, or railway platform that you can operate for 25 years. Please calculate what you can earn from it in various ways, over the next 25 years; discount that cash flow to its ‘present value’ (PV), deduct from that your profit margin, and pay me the balance amount as upfront rental.

Lets us assume the value of the said asset is Rs 100. And return to the asset in real terms is 4% per annum (net of inflation). The present value of the 4% earnings, discounted at the real rate of interest to such an operator, assuming it is 6%, (again real as opposed to nominal rate) would be Rs 51.3. Let us round it off to 50.

Rs 50 represents the PV of annuity of Rs 4, over 25 years, discounted at 6% per annum. In effect for every Rs 100 of assets monetised, the cash flow yield from the asset that the operator can expect is Rs 50. From this, he must deduct the return that he expects from his investment, the risk premium attached to the earning, and general uncertainty of dealing with a capricious government. Assume the operator wants a minimum of 50% return on his equity. He will then be willing to pay Rs 35 (rounding off the calculation) for the Rs 100 assets.

One doesn’t know if the Rs 6 trillion number is indeed the market value of the assets. But assuming it is, then the total value of upfront rental it can expect from such monetisation will be in the region of Rs 2.1 trillion or less. In fact given normal discounting rates 50% in such cases (100% return on capital), the government should expect no more than Rs 1.5 trillion.

Why is the Union government doing this?

The government has been nursing a “silent” fiscal crisis, as economist Rathin Roy puts it, ever since Modi tanked the economy with serial disasters like demonetisation, and GST; and followed it up with a disastrous tax cut for corporates of Rs 1.45 trillion in 2019, without giving any thought to how the shortfall would be made up. As result of continuously falling GDP growth, disruption in revenue caused by serial disasters, and the corporate tax cuts, Modi has had to steeply hike prices of inelastic commodities like petroleum products to pay for the corporate tax cuts.

The burden of the hike in direct taxes falls on the lower and middle class consumers indirectly, and hence, their consumption falls, dragging GDP growth down even further. This snarl of vicious circularity was further exacerbated by the pandemic, when Modi with his usual panache for disasters, tanked the economy by sinking GDP by 28% in one quarter. The GDP for the full year fell by 7%, the highest of any major economy.

So, all these Modi-engineered disasters have sent government revenues plummeting and government deficits soaring, thus necessitating record borrowings to pay for government expenses.

With government fiscal deficit approaching 9.4% of GDP in 2020, and general government debt at 90% of GDP in the current year, Modi has no choice to scrape the bottom of the barrel looking for crumbs of revenue to fill the government’s coffers. Hence the hare-brained asset monetisation.

Here are three charts in support of my comments:

Government revenue as percentage of GDP 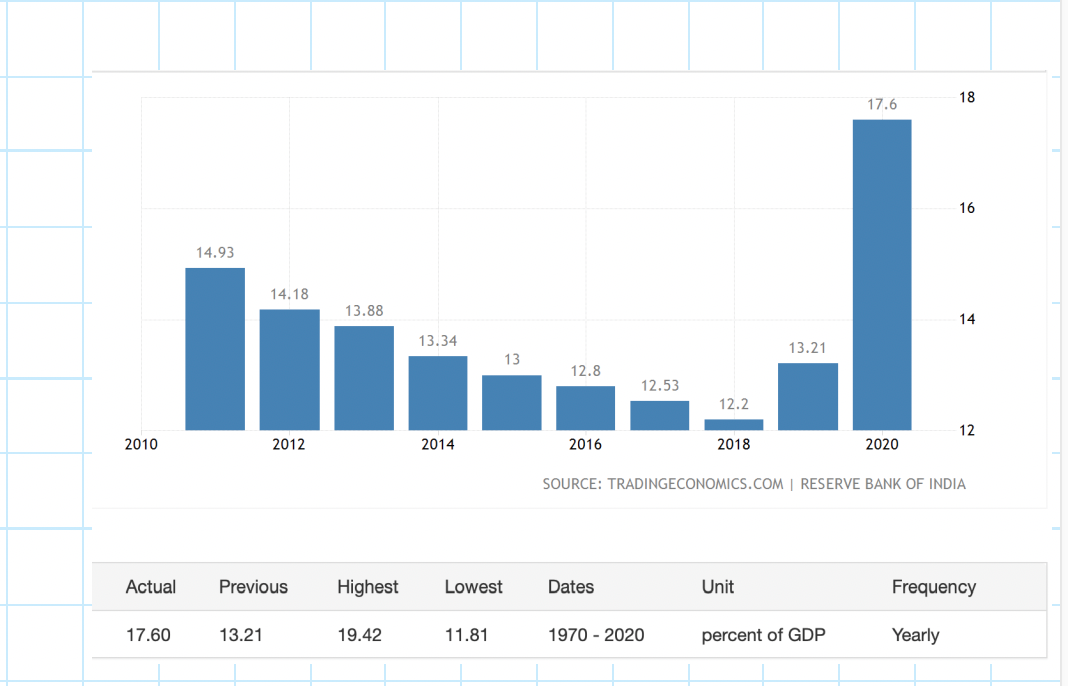 Fiscal deficit as percentage of GDP 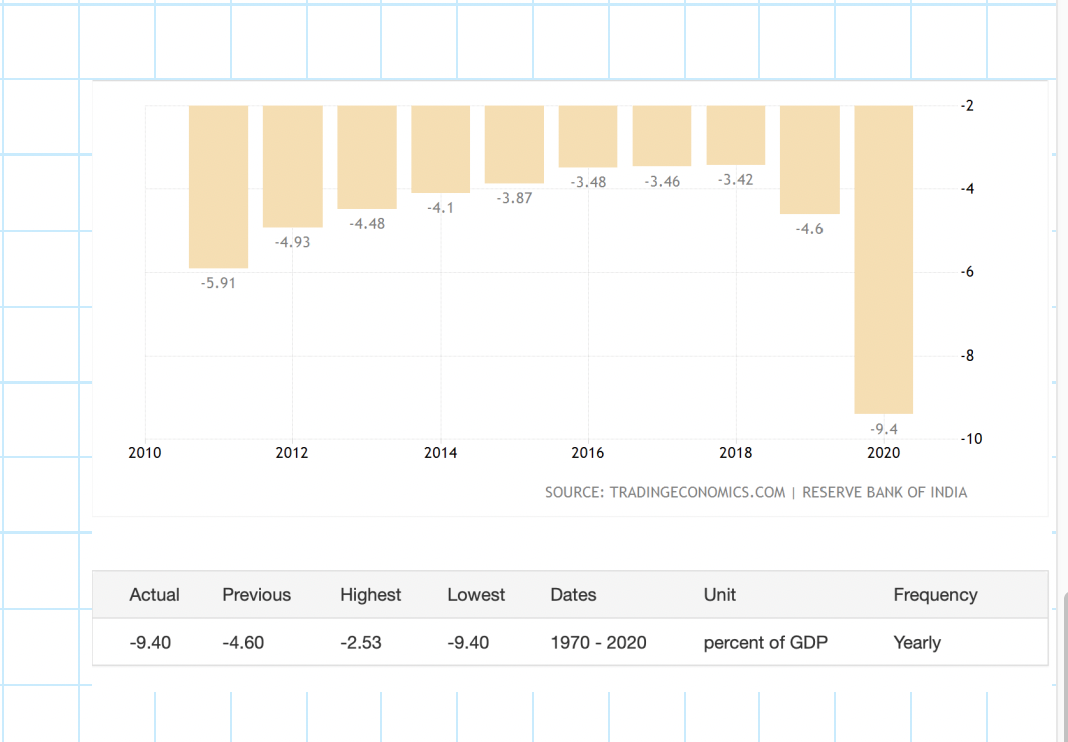 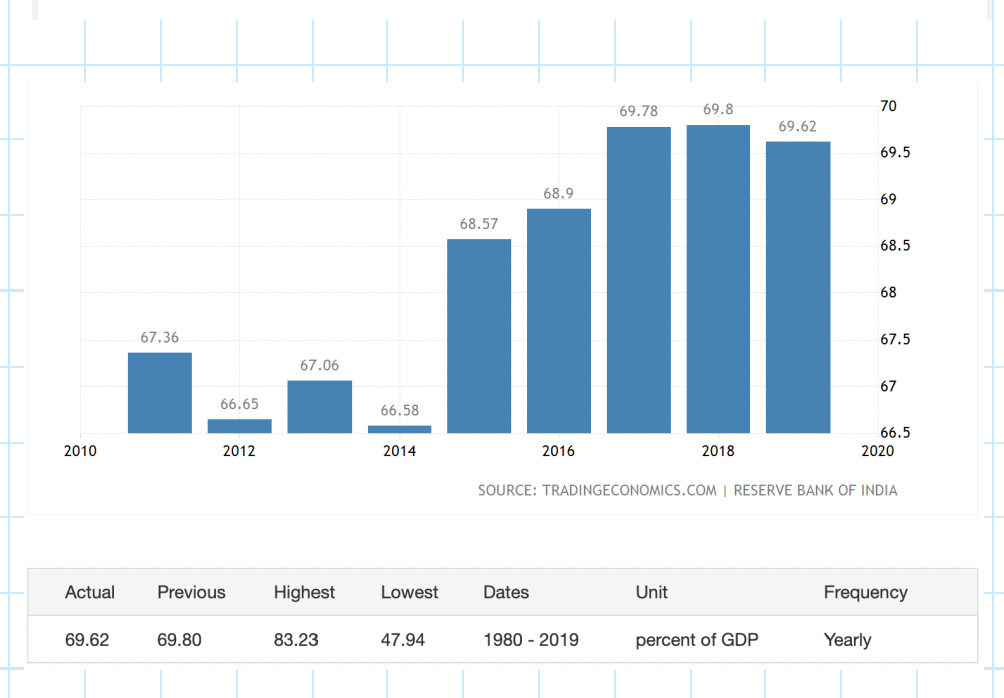 Data of the current year is not in the charts. But government debt as percentage of GDP now stand in the region of 90%. Government tax and non-tax revenues are expected to be 22.7% of GDP, and the combined government deficit is projected at 6.3%.

If and when monetisation of assets happen, they will add to the non-tax revenues of the government which are currently 5.1% of GDP, up from 2.7% in 2014-15. They have virtually doubled after 2014, and are testimony to the Modi sarkar’s genius for stealing money from PSUs, with even the RBI reserves not being exempt from such larceny.

All this skullduggery comes in the backdrop of India’s worsening credit ratings, that are just about a notch above junk, with a negative outlook.

For those of you with an interest in deteriorating government finances, I present you with the following table:

Note the non-tax revenue line in yellow. It tells the whole story.

Conceptually, is this a good way to privatise?

Why do we all urge privatisation of government assets? Why is it such a good thing, assuming that the government takes care not to create private monopolies while doing so?

Take the case of selling off Bharat Petroleum Corporation Limited to the highest bidder. What really happens when you do so?

First, the buyer offers more than the current value of the assets, because she can see hidden value in the assets, can improve on efficiency of use of assets by de-bottle-necking etc., and integrate it better into her existing businesses. In short, if the current value of BPCL is 100, the prospective buyer will likely pay 120 or more for it because of the synergies she can exploit. So the assets gets sold at a premium, and the premium then becomes available as savings in the economy for further investment.

Secondly, it is important to see what the government does with the money it receives. Is it used to pay for increased government consumption, or more government investment in say infrastructure, or simply to pay down excessive government debt? Ideally, given India’s fiscal position, where increasing government deficits, and increasing borrowings to finance them, are crowding out private investment, the government should use the privatisation money to pare down debt, lower real interest rates – and thus spur – private investment, that lowers the incremental capital output ratio or ICOR through increased efficiency of assets use, that helps spur faster GDP growth.

So to recap, privatisation should lead to

[a] addition of gross savings in the economy fetched by the synergy premium paid by the buyer of privatised assets,

[b] paring down of government instead of further increase in government expenditure, whether by way of consumption or investment, and

Having got that, lets us see what asset monetisation does.

Does asset monetisation bring additional resources to the gross savings pool in the economy? The answer is no, at two levels.

First, there is no transfer of title to the asset to the operator in asset monetisation. So the operator will severely limit any additional investment in the asset. Hence the scope for any increase in efficiency of use is very limited. Therefore, the operator is unlikely to pay any premium over the intrinsic current earnings value of the asset.

This should be very obvious if you consider how the operator will value toll collections on roads for example. Remember, private investment in share-cropped land is zero because the tenant has no incentive to invest in the assets, and the land lord has already lost interest in the asset. The incentives are very similarly flawed for rental operators.

Second, consider how will the buyer finance his purchase? In the case of BPCL, we allow foreign buyers. If there is one – whether directly or through an Indian partner – foreign savings come in to finance the transaction in the form of equity, adding to the pool of savings in the economy.

In the case of asset monetisation, the buyers will be mostly local operators, who will look to banks, and say mutual funds like RIETs, as Shekhar Gupta says in his show, (without realising that mutual funds are not supposed to be lending) for financing the transaction.

Since their credit is a lot worse than that of the government, an additional 600 bps (basis points) get added to the financing by way of risk premium, and so, whatever gains you make in efficiency of asset use by operators, are offset by the credit risk premium. Who benefits? No one really. You simply add to transaction costs in the economy without any tangible gain. So net net, asset monetisation does not result in any addition to gross domestic savings in the economy, either by bringing in foreign savings, or by attracting a significant synergy premium.

Now consider what happens to the money so raised from asset monetisation at two levels.

First, who does this money belong to? Most of the assets being monetised belong to PSUs who – a very crucial point this – already have private shareholders, albeit a minority. The money received from assets monetisation thus belongs mostly to PSUs, and in the first instance, will go to their treasury, and not the government. What will the PSUs do with the money? If they do nothing, then nothing happens further!

However, as we know from Modi’s track record, every bit of this additional money that PSUs get, will be vacuumed out of them by way of compulsory dividends or share buy-backs, and poured into the bottomless pit of government coffers.

We saw earlier that government can expect only 25% to 35% of value of assets monetised as upfront rental. In case of PSUs the yield is further diluted by minority shareholders. Where such shareholders are 50% and the operator wants a 100% return, government will get only 12.5% of the value of asset monetised.

Secondly, what will the Centre do with the money? Will it repay government debt? Perish the thought.

Modi is a command and control authoritarian, who has promised Rs 100 trillion of government-financed infrastructure. So the money will go into more Central Vistas, Bullet trains, six-lane highways and setting new records in height of statues.

Basically, the problem with government infrastructure spending is that:

[a] it commandeers scarce resources into a centrally controlled vision of what the country needs, instead of being determined in a bottom-up, need driven manner, that prioritises village and small town connectivity, local sanitation, roads, tap water, public transport, and schooling. Central planning has been the curse of India’s development story so far, and

[b] Spending on idle jumbo jets for the peripatetic Caesars simply means the incremental return on investment tanks further – the long shadow of an already poor ICOR stretches further – and that reduces future growth.

Finally don’t miss the point that assets monetisation doesn’t increase the share of resources available to the private sector to grow incrementally by even a penny. They remain in the same box as before, and real interest rates will trend higher, rather than lower.

All-in-all, the idea of recycling government funds by selling off existing assets to fund new ones is excellent. That’s the way to go. But in the current schema, no such thing happens, and speaking of the economy as a whole, nothing changes; except that transaction costs go up, and a severely limited government bandwidth is further stretched thin over needless paper work.

Not the least, the scheme is tailor-made for rent seeking at all levels of the babudom and politicians. I hope the Modi sarkar realises why “privatisation” has been so engineered. Nobody will have the bandwidth to monitor how the scheme works at the operating level. Leakages will abound at all levels.

A version of this article was first published here.