After Modi's decision to extend additional allocation of food grains under PMGKY until November, there are now three scenarios that can play out. 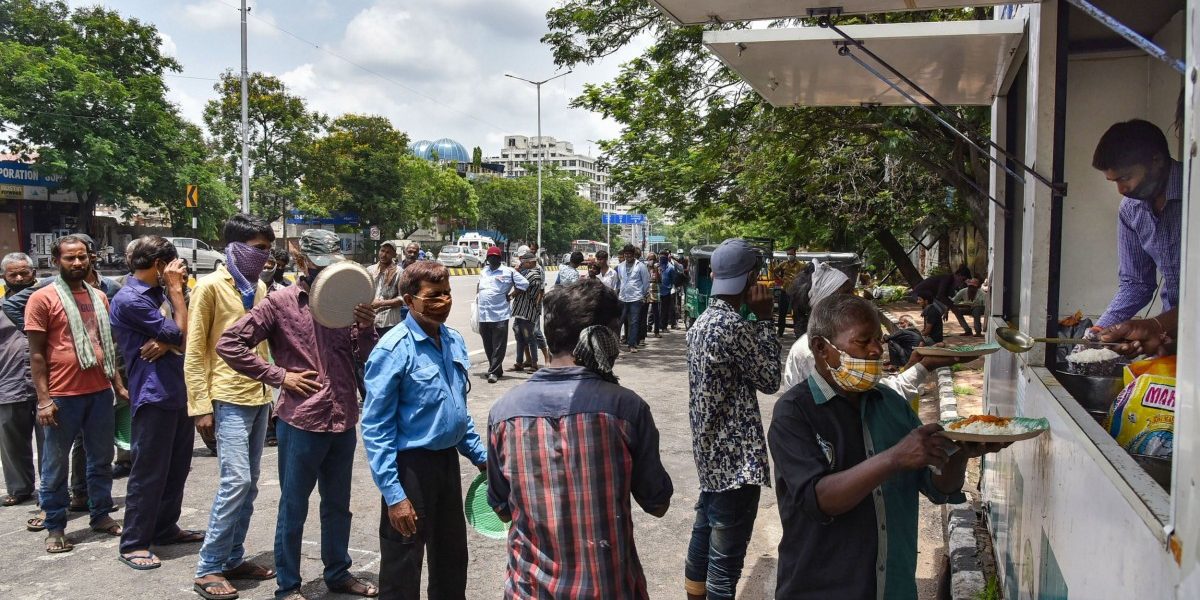 On June 30, Prime Minister Narendra Modi, in his address to the country, announced that the additional allocation of food grains under the Pradhan Mantri Garib Kalyan Anna Yojana (PMGKY) will be made available till November.

This means that from April to November 2020, 71.17 crore people – classified as priority households constituting 67% of the total population as per the 2011 Census – can get 10 kg wheat or rice, instead of the usual five kg per person.

In addition, 9.26 crore persons, classified under the Antyodaya Anna Yojana (AAY), are also eligible to get an additional five kg wheat/rice per person in addition to their entitlement of 35 kg wheat or rice per month per AAY household. Thus, an AAY household of five persons is eligible to get 60 kg of wheat/rice (35 kg normal entitlement plus 25 kg additional quantity) under the PMGKY.

Both AAY and priority households with a ration card can also obtain one kg chana from ration shops. Unlike wheat and rice, chana is procured by Nafed and supplied to the states directly, without the involvement of the Food Corporation of India.

For May and June 2020, the Centre had also announced the Atmanirbhar Bharat package, under which the migrant workers who did not have ration cards were made eligible to get five kg wheat/rice, free of cost. It was estimated to benefit about eight crore migrants.

However, according to government data, only 2.24 crore migrants took food grains in May 2020 and 2.25 crore took it in June 2020. The states have now been permitted to distribute food grains lifted from the FCI by August 30, 2020.

If lifting under normal allocations remains similar to last year’s levels, wheat stock in the central pool on April 1, 2021 is estimated to be 26.06 million tonne against the buffer norm of 7.46 million tonnes.

Notwithstanding the opposition to the recently promulgated ‘The Farmers’ Produce Trade and Commerce (Promotion and Facilitation) Ordinance, 2020’, the Centre will have to obtain full cooperation from farmers, APMCs and the Government of Punjab for procurement of paddy grown in kharif this year as it procures about 10-11 million tonnes of rice every year for government stocks. There is a strong feeling in Punjab that the Centre may attempt paddy procurement outside mandis, thus depriving the mandi board of about 6% taxes.

There is therefore a need for frank dialogue between the Centre and Punjab about the procurement policy in the next few years.

If wheat and rice procurement next year reach 39 million tonnes and 45 million tonnes respectively, India will again be saddled with excess stocks on April 1, 2021.

In this article, we examine how best India can leverage the surplus of food grains to maximise social welfare without sacrificing fiscal prudence, in a year in which the economy is badly impacted by the coronavirus, GDP growth is projected to be negative and both jobs and wages will be under pressure. Employment in the unorganised sector, which provides 92% of all jobs, is unlikely to recover to pre-COVID-19 levels. Even though employment data shows some recovery, the workers are settling for lower wages.

We consider the three scenarios in this context and estimate, in the following table, what their impact may be on the opening stocks in FY 2022:

Scenario 1: Status quo, i.e. enhanced allocation for the existing beneficiaries (80.34 crore) is not extended beyond November 2020.

Scenario 2: Additional allocation for the existing beneficiaries is extended from December 2020 to March 2021.

Scenario 3: Along with Scenario 2, NFSA coverage is further expanded by identification of an additional 10 crore beneficiaries during August-November 2020. We assume that they will also be given enhanced allocation at 10 kg of subsidised food grain from November 2020 to March 2021.

In all the three scenarios the opening stock on April, 1, 2021 would be well in excess of the buffer stock norm for both rice and wheat.

We are, therefore, of the considered view that the Centre has a unique opportunity to opt for ‘Scenario 3’ and expand NFSA coverage by including 10 crore additional beneficiaries with effect from November 2020.

State-wise number of additional beneficiaries may be allocated pro-rata, or any other criteria that NITI Aayog must quickly work out. We are reasonably confident that state governments can complete the identification of additional beneficiaries by October 2020 by applying the same set of criteria that they had used originally for the NFSA coverage.

Our advocacy for adoption of Scenario 3, however, may evoke a few questions.

First, what is the justification for inclusion of 10 crore additional beneficiaries under the NFSA? Second, can we sustain the expanded coverage under NFSA in future years, even if there are cyclical monsoon failures or floods? Third, our assessment shows if the current level of procurement continues, our food stocks would also continue to increase from year to year as the annual offtake under PDS and other welfare programmes and open market sale scheme, would be less than the procurement during the year. What then is a more sustainable, longer term solution for reducing excess stocks to a prudent level and for cutting down avoidable carrying costs?

As regards the proposed expansion of coverage under NFSA, it must be noted that the current level of its coverage is based on the 2011 Census (India’s population was 1210.3 million). In a recent paper, Drèze, Khera and Mungikar show that if the projected population of 2020 (1317.7 million) is considered and the coverage ratio is maintained at 67% as before, additional 10 crore beneficiaries would be eligible under NFSA. Besides, increased population, expanding coverage of NFSA would also be merited in view of the ongoing public health crisis which has surely increased the incidence as well as the intensity of poverty, not just in India but also in other low and low middle income countries.

Though we do not have any official estimate of poverty in India after 2011, aligned with the World Bank’s poverty norm for the low middle income countries ($3.20 per day), the headcount poverty ratio in 2011 as per the revised norm is estimated by the World Bank at 60.4%. As a consequence of the impact of the pandemic induced-lockdown on livelihoods sustaining activities, the World Bank has estimated that of the 176 million people in the world who are expected to be pushed below the $3.20 per day poverty line, two-thirds would be in South Asia. This is equivalent to an increase in the poverty ratio by 2.3 percentage points as compared to a non-COVID-19 scenario.

Hence, we believe that coverage of 67% of the addition to the population subsequent to 2011 is well justified on grounds of distributional equity. The forecasts by various multilateral institutions and rating agencies also do not seem to suggest a sharp V-shaped recovery in course of the current year. Utilising the available excess food stocks by expanding coverage of the NFSA would be a welfare-maximising policy response.

As to the second question, data clearly shows that procurement of rice and wheat originate largely from the areas of assured irrigation which are reasonably well insulated from monsoon failures. Therefore, procurement of wheat and rice estimated by us is likely to be achieved.

The third question, however, does not have easy answers as it involves fairly difficult public policy choices with political economy risks.

Before concluding it needs to be mentioned that the FCI and the state governments have done a good job in procuring, storing and moving food grains from surplus states to deficit states. The Centre also needs to be credited for bearing an additional burden of Rs 2.35 lakh crore (Scenario 1 above) of food subsidy during the Coronavirus crisis.

If there are no reports of starvations, even from the poorest districts of India, despite loss of income of crores of people, the credit should go to National Food Security Act, 2013.

Siraj Hussain is a former Union Agriculture Secretary and is currently a Visiting Senior Fellow at ICRIER.  Jugal Mohapatra retired as Secretary, Fertilisers and Rural Development in the central government.