Government's Demonetisation Shock Has Hit the Poorest the Most 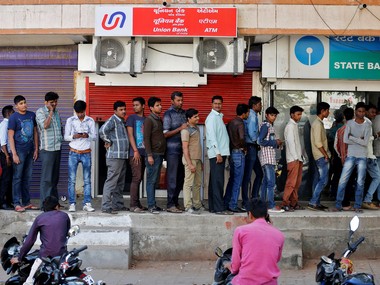 For the last few days the world is watching the bizarre spectacle of millions of Indians waiting in long, unending queues to recover their own money from banks, post offices and ATMs even as the government at the Centre remains firmly in denial about the untold hardship to the poor who cannot afford to stay away from their daily wage work even for a day. Some senior citizens have died of exhaustion standing in queues for hours on end. Families have suffered as private hospitals refuse to take currency notes of 1000 and 500 denomination, legal tender just till the other day.

To rub salt in their wounds Prime Minister Narendra Modi, on a visit to Japan, makes a statement that he had anticipated short term pain to the ordinary people and goes on to warn that even harsher measures could come to tackle black money in the near future. Meanwhile, the finance minister Arun Jaitley goes about his daily briefings spouting platitudes about how the people are willing to suffer some pain to promote the larger cause of fixing the black economy. He has however admitted that it will take a few weeks for the adequate supply of new currency notes to materialise and that the bank ATMs will take time to  be able to adjust to the size of the new notes. All this comes as no relief to the people of this country who are left wondering whether the government could not have prepared better to face what is undeniably the most extraordinary situation India’s economy has faced since independence.

It is now becoming clear that the sheer magnitude of the ongoing exercise of replacing 85% of all currency in circulation was not fully thought through in terms of its logistical complexity. Its basic economics  and ability to prevent future black money generation is also questioned by many. No wonder, developed as well as emerging economies have rarely resorted to demonetisation of this magnitude i.e replacing 85 % of all currency in circulation. To put things in perspective, India’s own demonetisation exercise in 1978 had resulted in less than 5% of the total currency being replaced. The well regarded economist Prof Kaushik Basu, till recently Chief Economist of World Bank, has said demonetisation per se is not good economics as the collateral damage could far exceed its benefits.

There are other economists and market practitioners who talk about the long term benefits of demonetisation such as the possibility of the government ending with a massive cash surplus equivalent to the black money which the owners may not come forward to replace at all. It gets extinguished in public and gets transferred to the government. This sum — estimated at Rs 2 to 3 lakh crore — could be used by the government for public spending in social and physical infrastructure. However, what is forgotten is such benefit , if at all, would only flow in the longer time horizon. In the immediate future the withdrawal of currency of this magnitude will cause a severe monetary shock which the real estate sector is already feeling. Generally it takes some time to recover from sudden price shocks to the land market as it negatively impacts the economy as a whole and dampens  consumer sentiment, especially in urban India. It is almost certain that the economy will slowdown further in the short to medium term and there could be more joblessness, especially in the construction sector. It would not be surprising if GDP growth contracts by a few percentage points in the initial few quarters.

Meanwhile Prime Minister Modi has further upped the ante by suggesting he could take more harsh measures in the future. The PM would have truly walked the talk if he had attacked the nexus between the big business and politics which truly nurtures the black money ecosystem.  It is an open secret that over 75% of political party funding is in cash whose source remains undisclosed.  BJP is the most cash funded party these days. Will PM Modi have the will to push for election funding reforms? If Modi wants his drive against black money to have credibility he must demonstrate he can go after the big fish and cause them immense pain. So far the pain has been largely borne by the ordinary people. Indeed, the PM has taken the biggest risk of his political career so far. The next few months will make it clear whether he has bitten more than he can chew.