Why Is the Government Still Obsessing Over GDP Statistics?

While an important measurement, GDP is far from adequate to judge a country's economy and socio-economic conditions. 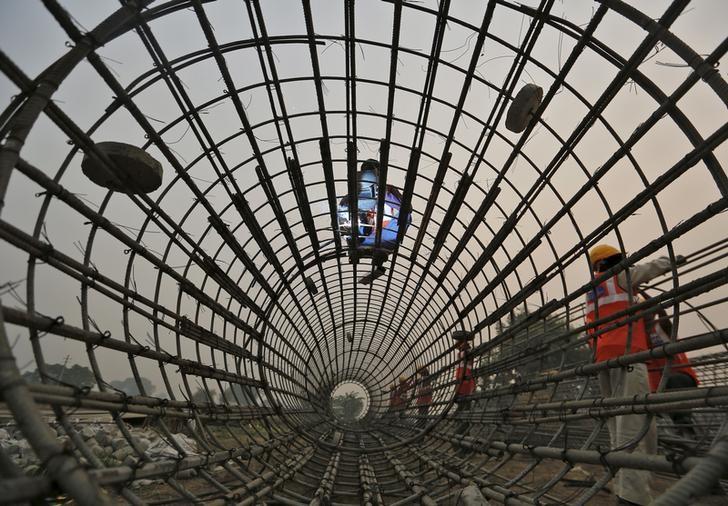 Labourers work at the construction site of a bridge being built for metro rail in New Delhi, India, November 30, 2015. Credit: Reuters/Anindito Mukherjee/Files

“Everything can be explained to the people, on the single condition that you want them to understand.”
∼ Frantz Fanon

In a recent speech, Prime Minister Narendra Modi scorned at the wisdom of some globally-renowned economists, discrediting their skepticism on demonetisation, citing the robustness reflected by the latest GDP data. Belying the grim forecasts on the impact of demonetisation, India’s economy clocked a 7% GDP growth rate in the fiscal third quarter (2016-17). From a methodological perspective, this is baffling when we see how low industrial production levels have remained over the last few years (discussed earlier). But does a 7-8% GDP growth rate (even if correctly measured) realistically reflect our economic capabilities and project developmental realities? Is an obsession with GDP as a measure of economic progress justified in today’s times? What are the key facts that GDP fails to account for and measure? A tour de révision highlighting a few basic limitations of GDP may help here.

Mark Twain once remarked, “Facts are stubborn things, but statistics are pliable”. In an article written last year, I argued how India’s obsession with GDP numbers as a measure of economic progress – largely reflected by the unfair weightage given to it by politicians and policymakers in day to day discourse – merits a deeper scrutiny. In assessing India’s revised GDP calculation method, I emphasised on how critical it has become for our GDP-obsessed policymakers to take these numbers with a pinch of salt in discussing India’s overall growth prospects, capabilities and assessing current developmental progress. We may do well in encouraging a discussion on ensuring a more rigorous, transparent cross-validation process for the statistical data collected and accounted for in India’s own GDP calculations (especially for monitoring the discrepancies recorded) unless we wish to descend into China’s way and ambiguously project growth data.

Having said that, we may keep going back and forth in studying the mathematics of GDP and arguing whether the current GDP data or one in the past under-measures or over-states our country’s production and growth capabilities. The larger point is, to what extent does GDP, as cited by politicians, mainstream media and so on, qualify as a reliable macroeconomic indicator for reflecting overall economic and developmental progress for countries today, particularly in developing societies like India?

For a start, GDP measures the total monetary value of final goods and services produced within the domestic territory of the country over a period of time. While significant methodological advancements have been made in GDP accounting at both the national and global level, one critical limitation of both GDP and GNP (Gross National Product) is that they only value outputs at market prices. In a country like India, and elsewhere too, a majority of economic activities occur outside the market and the values of their outputs need to be somehow calculated. This is called the “imputed” value.

The above limitation can be explained with case illustrations like farmers involved in subsistence farming consuming the food they produce, where economists often fail to estimate the quantity of produce and impute market values to what such farmers produce but did not or could not sell in the market and consumed themselves; or for people who live in houses they own, where economists usually fail to impute the value of the “dwelling services” involved (if the house owners are paying the rents at market rates to themselves). Moreover, all non-marketed transactions or output produced is missed out from the official GDP accounting process, whose value isn’t even imputed. A case in point can be made here to India’s massive informal sector, which was worst hit by the demonetisation drive.

Second, income measures like the GNP, accounting for incomes of all residents of a country living within or outside the country, fail to realistically represent living standards of people. An optimal standard of living is vital for measuring developmental progress. However, with GDP and GNP you can get a perspective on living standards only by accounting total and average monetary income (as done by per capita income).

Even if we attach a greater weight on the persistent, gradual rise in monetary income, for things that can even be bought with money, we often make poor decisions as consumers (assumed as “rational beings” who spend money to maximise their well-being). Even if we are totally rational as consumers, the existence of positional goods (a concept coined first by economist Fred Hirsch and explained as a good which is only valued by the possessor because it’s not possessed by others) in any country makes income an unreliable gauge of true living standard.

Positional goods are goods whose value derives from the fact that only a small proportion of potential consumers can have them. Which means to say, even if our income increases (with an 8% GDP growth rate), we may still be unable to acquire things like houses in prime locations, a good education or access to top jobs. This point is connected to explaining India’s overall slowing productivity rate, exacerbating skill gap and worsening employment scenario (discussed here).

Third, distribution of income amongst and within households or different economic classes in given societies is not captured by GDP data. For most studies measuring and accounting trends in income inequality, survey methods based on consumption spending and consumption behaviour are used and relied upon. Economists like Angus Deaton, Jean Dreze, Kaushik Basu and Ravi Kanbur have worked extensively on developing such metrics.

Fourth, one of the most important limitations of GDP is that much of the ‘work’ done by people today remains under-measured or largely unaccounted for. Despite an overwhelming emphasis on it across social sciences, the value of work – a definitive condition of humanity in most of our history – is sporadically covered by modern economics as a subject beyond the income it generates from the hours recorded at work. Methods in mainstream growth economics fail to incorporate the effect of some of the techno-capitalistic advancements made, like the role of the internet, telecommunications and so on in shaping the productive capabilities of people in modern economies and the nature of work itself.

Measuring the value of work

To extend the argument presented as the fourth limitation of GDP in growth accounting, we face two key conceptual difficulties attached in studying the value of ‘work’. The first is the measurement problem, where the number of hours spent at one’s workplace can no longer be used as a definitive input measure of one’s total work and output productivity level.

In an internet age, where the presence and reach of all modes of communication spreads across any tangible means of infrastructural boundaries, the nature of work transcends such narrow spaces, making measurement more difficult. A laptop with in-built work software, email and internet access acts as a mobile workstation today. With options like ‘work from home’, the calculation of average hours spent for white-collar jobs remains difficult. Moreover, even in countries with poor public transport and sprawled-out living spaces, the total hours spent commuting to and back from work are hardly taken into consideration while determining ‘total work’ and the ‘value of work’.

The second conceptual difficulty is related more to the behavioural side of analysing the value of work, which is still done using a utilitarian calculus (so a ‘good’ job is one which yields more income). That is to say, if a worker has taken on a ‘bad job’ (with poor working conditions, high working hours, no job security etc.), neo-classical economists will argue that the worker has taken the job because she/he concluded that the ‘bad conditions’ are more than compensated by the wage (invoking the above discussed marginal utility of work theory). Thus, if someone freely chooses to do something, it must, by definition mean that she/he prefers that to other options. But is this always true?

A choice made by a person to work at a company is conditionally dependent on so many factors apart from the income earned or promised from the work. Most workers who willingly take up ‘bad’ jobs do so because the alternative is starvation or perhaps there is a high level of unemployment present in the country at that point, or maybe they have migrated from rural areas to an urbanised city area for settlement purposes. Thus, to say that ‘choices’ made by workers in signing up for ‘bad’ jobs represents utility-maximising behaviour of a given person for a promised sum of money as income is incomplete, to say the least. Some behavioural economists in recent times have discussed this aspect in explaining the concepts of adaptive preferences and false consciousness.

It will be more useful if the mainstream discourse on the economics for and of development in an emerging country like India addresses some of the above limitations, conceptual gaps and policy questions going beyond the chest-thumping done in celebrating a higher GDP growth rate.

Does this mean GDP doesn’t matter?

No, in highlighting the methodological limitations of GDP above, I do not wish to dismiss its vitality as a robust macroeconomic indicator, reflecting a country’s production and income-generating capabilities. A rise in GDP is important for a growth-based view of development. A persistent rise in levels of real income (including personal incomes) is critical in driving an individual or group out of economic poverty (recently supported by the idea of universal basic income as well) and expanding the size of public revenue is critical for financing other social welfare needs, thus remaining functionally linked with the promotion of other capabilities and opportunities for a state’s citizens.

However, the central idea of development lies in studying the value of high-income levels, greater productivity enhancement, large export basket of goods and services and high foreign investment, and their link in promoting the overall ‘freedoms’ of citizens, so that people are able to choose an optimal standard of living (a distinction often drawn here is between the ‘opportunity’ and ‘process’ aspect of freedom from Sen’s own works).

Such an idea to economic development isn’t transcendental in nature nor an outcome of some perfectly imaginative goal, but rather qualifies as a basic requirement for every social policy to achieve through outcomes and not just via enlisting the realisation of basic freedoms as outlays. A fact that our prime minister doesn’t seem to fathom.