How Much Fiscal Firepower do India's States Have to Combat the COVID-19 Crisis?

If the nine most afflicted states avail the 0.5% ‘escape clause’ as per the 15th FC recommendation report, they have a maximum fiscal space of around 1.55 lakh crore. 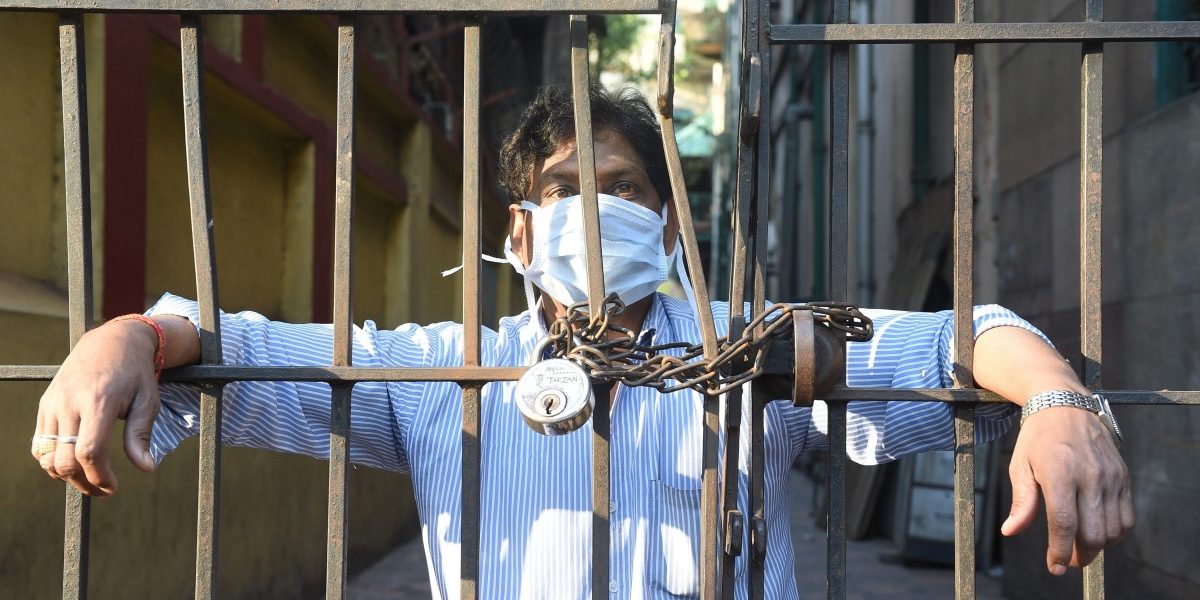 A man looks out from a closed gate during lockdown in the wake of the coronavirus pandemic, in Kolkata, March 24, 2020. Photo: PTI/Ashok Bhaumik

The impact of the outbreak of the novel coronavirus has been massive. With confirmed cases and the death toll rising exponentially across the globe, policymakers have announced a slew of monetary and fiscal measures to combat the outbreak with an aim to ‘flatten the curve’.

The myriad of measures by global policymakers have failed to arrest the financial bloodbath across global stock markets.

Interestingly, in India, the response of policy makers at the Centre has been attuned more towards monitoring developments while the Reserve Bank of India (RBI) has continued its efforts towards assuring adequate liquidity in the financial markets. Market regulator SEBI too has announced relief to companies by extending deadlines to file fourth quarter and annual earnings reports.

Also read: COVID-19’s Economic Blow will be Unprecedented. India Must Rise to the Challenge.

But what has been worth praising and most welcome is the response seen at the Tier-II and Tier-III level to alleviate the concerns and spread awareness among the public. A number of states like Maharashtra, West Bengal, Kerala, Delhi and Karnataka, among others, have gone into complete lockdown and a few have also announced fiscal stimulus measures to combat pandemic fears.

Given the uncertainty in the duration of this outbreak, the question, however, remains as to how much fiscal wherewithal do the states have to limit the fall of the economy? Also, how much adherence to the fiscal and monetary framework is needed by both the Centre and the RBI during this novel mixture of a supply and demand shock?

A notice put at a closed shop during a lockdown in the wake of the coronavirus pandemic, in Kolkata, March 24, 2020. Photo: PTI/Ashok Bhaumik

How much fiscal space do the states have?

Indian states, in the past week, have announced a number of steps ranging from cash transfers, clearing arrears and tax relief, among others. This was led by Kerala’s large stimulus announcement of Rs 20,000 crore with a focus on front-loading the state’s expenditure in the next three months. With six other states having announced fiscal packages, will other states also follow suit?

The table below is an analysis of the recently announced budgets of nine states which are critically affected by the pandemic in terms of confirmed cases. These states account for almost 70% of India’s nominal GDP (as per 2nd AE) for FY;20. To compute the additional fiscal space, I have assumed that there will be a 1% fall in nominal GSDP (gross state domestic product) in FY’21. If the states avail the 0.5% ‘escape clause’ as per the 15th Finance Commission Recommendation Report, the states have a maximum fiscal space of around Rs 1.55 lakh crore, which is around 1.1% of the aggregate GSDP of all these states put together.

However, if they utilise a deviation of 0.5% from the FY’21 BE numbers, then the additional fiscal space available to them is around Rs 68,000 crore, which is 0.5% of the aggregate GSDP. The maximum stimulus can come from the large states like Maharashtra, Gujarat, Karnataka and West Bengal, which at the moment have budgeted fiscal deficit well within the 3% target. These states spend around 4.7% of its total expenditure on health and family welfare and part of this additional stimulus could be directed towards this expense head.

How much adherence to fiscal rules will the Centre follow?

Governments across the globe have announced a number of fiscal measures like direct cash transfers, loan guarantees, deferring loan and tax payments, tax cuts, economic stimulus among others. In India, there have been a number of eminent economists who have made their pitch for fiscal stimulus to mitigate the impact without worrying about the fiscal deficit target.

The concern for the finance minister is not only of already utilising the escape clause of deviating by 0.5% from the fiscal deficit target in both FY’20 and FY’21 but also lower direct tax collections which would further weigh on weak finances in FY’20.

The Centre, so far, has announced an economic task-force under the leadership of the finance minister and the committee will have to stitch a fiscal stimulus package, to support (even bailout) specific sectors in the economy and revive consumer confidence. However, a coordinated Centre-State fiscal response via sizeable support to the people and firms (especially the small scale informal economy) via wage subsidies, economy wide tax cuts and direct cash transfers will be a more directed solution.

Liquidity and transmission ahead of rate cut?

The RBI, so far, has rightly stepped in by assuring liquidity (both rupee and dollar) in the system. Despite this, neither have investor sentiments in the stock markets been buoyed, nor have GSec yields budged. The markets expect a rate cut. Not only sooner than RBI’s scheduled MPC meet on April 2, but also significant monetary push of at least 50 bps.

However, drilling into the data on lending rates shows that commercial banks have not entirely transmitted the cumulatively rate cut of 135 bps announced by the RBI in five consecutive MPC meetings since February 2019. The weighted average lending rate on fresh rupee loans has declined by only 61 bps in a span of one year from January 2019.

With inflation cooling down in February 2020, averaging 4.7% so far this fiscal, the MPC does have the monetary space, albeit marginal, to cut rates. But a rate cut won’t repair broken supply chains if commercial banks impede transmission and limit credit flow.

Economic commentator Niranjan Rajadhyaksha also points out that the rate cut impact will be muted if private sector decides to save rather than spend.

In addition, the problem for commercial banks also emanates from a deteriorating asset quality number going ahead. RBI’s Financial Stability Report in December 2019 projected GNPA ratio of all scheduled commercial banks rising from 9.3% in September 2019 to 9.9% in September 2020 under baseline scenario and 10.5% under severe stress scenario. These numbers were projected at a time when the pandemic had not even propped up which means the numbers could worsen further. Ergo, the challenge for the banking system will be to improve credit flows and defer loan payments to revive the current demand slowdown amidst declining spreads and likely deteriorating asset quality.

To curb the exponential growth of COVID cases in India, a coordinated “M2-F2” (medical-monetary- fiscal-financial) measure will be required. The medical response remains an ongoing process with a public private partnership while the monetary response via rate cuts will be more towards calm the panic in the financial markets. The more critical responses will be the two Fs to revive the economy. The economic and financial impact is going to be massive and the objective will be towards limiting the impact.

Thus, a concerted fiscal response directed by the Centre but executed by the Tier-II (States) and Tier III (local bodies) will be key in combatting the economic downturn.