The Three Fault Lines in the Global and National Economic Landscape

The government’s response to these fissures will shape the course of the country’s socio-economic trajectory for the next decade. 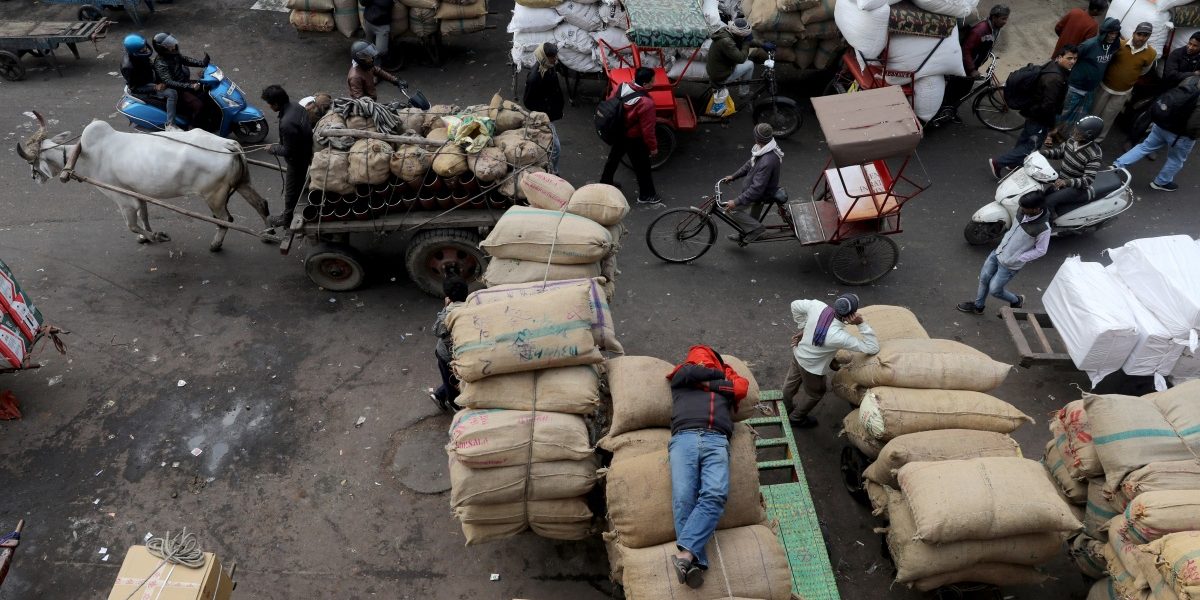 A labourer sleeps on sacks as traffic moves past him in a wholesale market in the old quarters of Delhi, January 7, 2020. Photo: Reuters/Anushree Fadnavis

India currently has three broad economic fault lines. The government’s response to these fissures will shape the course of the country’s socio-economic trajectory for the next decade.

The first undercurrent: a deepening of global income and wealth inequalities. The second: a rupture in global and national labour markets from the pandemic and its subsequent economic fallout. And the third: rising unemployment with weak worker contracts, and declining female labour income.

To understand the first faultline, looking closely at the recently released World Inequality Report 2021 data may help. The report highlights how the share of the bottom 50% of the world in total global wealth is estimated to be 2%, while the share of the top 10% is 76%.

Since wealth is a major source of future economic gains, and of power and influence, this presages further increases in inequality (we have also taken this parametric diagnosis further in context to measuring ‘access inequality’ i.e. in terms of access to basic social and economic opportunities in a recent study done on ranking performance of states across India).

Check the two figures below. 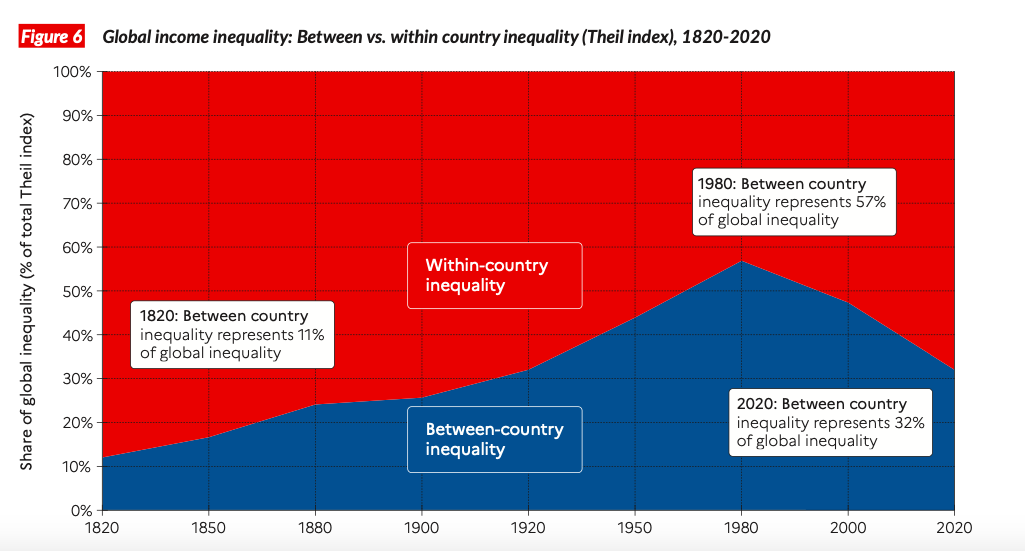 The wealth of the top 10% globally – which constitutes the middle class in rich countries and the merely rich in poor countries – is growing slower than the world average. But, the top 1% captured 38% of the global increment in wealth, while the bottom 50% captured 2%.

Those in the top 0.1% saw their share of wealth rising from 7% to 11% in just a year; a consequence of the stock market boom and rise in corporate profits of the top billionaire firms.

Looking at our domestic context, the top 1% of India’s population earned more than 21.7% of the country’s total national income in 2021, while the bottom 50% made 13.1% of the money. The authors of the World Inequality Report argue that the ‘deregulation and economic liberalisation’ policies pursued since the 1980s resulted in one of the most extreme increases in income and wealth inequality.

The great resignations vs weak contracts

In understanding the second and third undercurrents/fault lines, we need to dig deeper to study the global (national) labor market landscape – particularly from the last two years’ perspective.

In a recent paper measuring German workers’ beliefs about rents and outside employment options authored by economists Simon Jager, Christopher Roth, Nina Roussille and Benjamin Schoefer, they find that 13% of jobs would not be viable at current wages, concentrated in the low-wage segment of the German job market.

Most undertake low-wage work, because of being ‘overly pessimistic about outside (work) options’, and this belief tends to give ‘monopsony power’ (undue competitive advantage) to employers in context to low-paid workers.

The only scenario under which such low-paid workers are forced to change their ‘misinformed conceptions’ about external employment scenario and look for say, better wage opportunities (or a wage-premia), would be a big enough shock that forces a massive shakeup of the entire labor market.

Two years of COVID-19 – and its subsequent economic fallout-have done just that.

Most economists are now calling this ‘shakeup’ in the global labor market as a period of ‘the Great Resignation’.

In the US, where official employment numbers (like growth numbers) are robustly accounted for and periodically made available, more than four million American workers quit their jobs in September, shattering the record for resignations previously set the month before. And some 40% of remaining employees are thinking of quitting too, according to a recent Microsoft report. In tech, more than 72% of US-based tech employees are thinking of quitting their job in the next 12 months.

So, what is going on here with respect to the global (national) labour-market scenario?

Under normal circumstances, a massive exodus of ‘job-quitters’ would signal a given labour-market to be dealing with a great shortage of jobs (a demand side problem). But, the last two years haven’t been part of normal times, and a long cycle of mass-resignations isn’t restricted to US alone either, but a cause of global concern.

The ‘work from home’ (WFH) scenario (especially in tech, other service-based jobs) has changed the workers beliefs/expectations about their own job-and the outside employment scenario. The ‘misinformation’, or ‘over-pessimistic’ attitude (explained above), which many low-paid workers earlier had, has somewhat been gradually reoriented.

For working parents, under a more taxing work from home scenario, those without adequate childcare support, many were forced to focus on managing ‘household chores’ and ‘kids’ and in patriarchal socio-cultural settings, the adverse impact of this additional ‘care responsibility’, was evident in the number of women moving out of the workforce.

And so, broadly, the pandemic’s push to a disruptive transformation of work and the workplace- what would have taken decades in absence of a virus, has changed the global labor market’s status quo for long.

Still, the larger concern here remains: those responsible for taking decisions and in influencing the design of policies for kickstarting an economic recovery, seems to continue missing out on these ‘not so subtle’ sightings. The issue of rising inequality (on income-wealth parameters) and the worsening of labor-market conditions need to be viewed/responded to intersectionally.

Creating jobs that recognise the orientation of ‘new’ work demand – whose social security needs may not just includes health insurance or pension, but also greater support for child-care while providing time-endowment for leisure, needs to be better enforced. The existing deal provided in the ‘employer-worker’ contract fails to accommodate for these factors.

A labourer welds an iron pillar at a building material factory in an industrial area in Dasna, in Uttar Pradesh, January 9, 2019. Photo: Reuters/Adnan Abidi

In Indian scenario, its abysmal labor market situation continues to gravitate towards a worse (pre-pandemic) state. The Periodic Labour Force Survey (PLFS) data for January-March 2021, released last week, showing that (Indian) unemployment rates for that quarter were close to pre-covid levels of 2020. And, women, as argued earlier in 2020, bore the brunt of the pandemic in terms of the economic fallout.

In a nutshell, jobs in the macro-organised (secured) space have been shrinking for the educated workforce (with worse employment numbers for women) in India from much before the pandemic. This has obviously added to the ‘inequality concern’ too.

Even during-since the second wave of the pandemic in India, only a select number of sectors (like construction) have added to temporal cycles of job creation as service-sectors struggled. However, the third undercurrent, of weak work-contracts, across these ‘job creating’ sectors continue to make the conditions of workers more exploitative.

As per PLFS data for 2020, less than 43% of all employment contracts in India’s organised workforce ensure basic social security: provident funds/gratuity, health care and maternity benefits. The share of regular salaries workers who have at least one social security benefit i.e. ‘regular protected employment’ is 40% (as per 2019-20 data).

Indian workers – in areas of health, education, utilities too – are now increasingly finding refuge in temporal ‘ad-hoc work contracts’, while those in the lower-paid work category (plus low-end-manufacturing space) continue being absorbed by a swelling vulnerable, ‘unorganised’ sector. Those, with capital, and more privilege than informal workers, are preferring to be ‘self-employed’ (under the sub-category of ‘Own Account Worker’), as reported by CMIE recently.

Narrowing down the global diagnosis of the Great Resignation, from the Indian side, the issue appears to go much beyond any analysis that sees it as part of a ‘supply-side problem’ alone.

Like Jager’s study, what’s needed in India (as attempted in a recent study by our Centre) is a careful analytical scrutiny of the ‘demand-side’ problem in the labor market landscape, through a deeper understanding of the psychology of worker expectations, which is centered around the changing composition of worker beliefs about rent (work-pay), housing, social security, care-responsibilities, and outside (employment) options.

This can help in undertaking (fiscal) policy interventions for minimising ‘access inequality’ too (which will help in bringing down existing wealth and income inequities). More importantly, it is imperative to see how ‘intersectionally’ each of the undercurrents (or faultlines) in the global (and national) economic landscape are better understood for effective public policy intervention.

For now, the challenge to first read into the crises at hand – and then respond to them – for most developing nation-states (especially India) remains frighteningly scary.