The Modi government's key economist believes the Rs 400 crore figure oft quoted is an old statistic and one spread by P. Chidambaram. He is wrong. 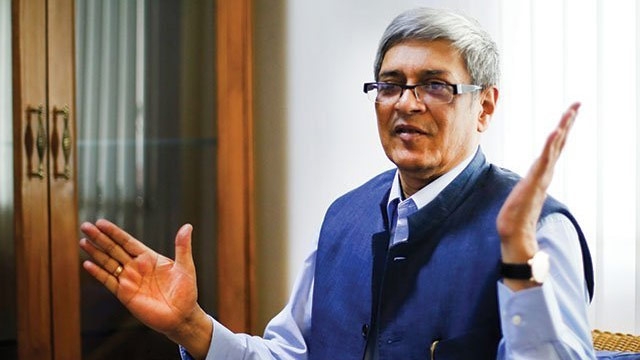 New Delhi: When Prime Minister Narendra Modi announced his government’s decision to demonetise Rs 500 and Rs 1000 notes on November 8th, one of the three major reasons given for the move was the menace of counterfeit or fake notes in India’s economy.

This figure is a little strange, because the most commonly quoted figure for counterfeit/fake currency in India is around Rs 400 crore. In an interview with IndiaToday, Debroy lays out a two-fold argument when it comes to counterfeit currency. Journalist and interviewer Rajdeep Sardesai starts off at around the ’17 minute, 45 second’ mark by asking whether the costs of demonetisation outweigh the benefits, with Sardesai pointing out that counterfeit currency in India is only valued at Rs 400 crore.

Debroy replies by first saying that Rs 400 crore goes a long way when it comes to terror financing. “Let’s take this figure of Rs 400 crores,” he says. “ How much money did it cost to undertake the attacks in Bombay?  A very small sum of money. So the negative externalities associated with the use that can be made of Rs 400 crore of fake or counterfeit money is far far higher than purely that quantifiable number.”

He then goes onto to repudiate that 400 crore figure and traces its origin to former finance minister P. Chidambaram and the previous government. Immediately after talking about the Bombay attacks, he adds: “The 400 crore figure by the way is also an old figure that has been cited by Mr. Chidambaram. Since then, the figure is more like Rs 2,000 crore”.

Is Debroy right about the Rs 2,000 crore figure? Namely, is Rs 400 crore an “old figure” that was cited by Chidambaram? A fact-check shows that Bibek Debroy is wrong. In response to a question raised in the Rajya Sabha in August 2016, Minister of state for finance Arjun Ram Meghwal, when asked about the problem of counterfeit currency, references a study undertaken by the Indian Statistical Institute (ISI), Kolkata under the overall supervision of the National Investigation Agency (NIA).

This study on FICN (fake Indian notes in circulation) states that the face value of FICN in circulation was found to be Rs 400 crore and that the value has remained constant for the last four years. The results of this ISI and NIA study, which was conducted over the course of 2014 and 2015, were released in May 2016 and have been accepted by the current Modi government. In fact, the figure finds mention in the government’s recent affidavit before the Supreme Court as well.

As Debroy notes, however, there have been a number of intelligence agency estimates that place the value of counterfeit notes in the range of Rs. 1,500 crore to Rs. 2,500 crore. However, these come from off-the-record sourced stories. These agency figures were also not cited by Meghwal when asked in the Rajya Sabha, which means either that the finance ministry is less well informed than the reporters who did these stories or that the government clearly does not take those figures seriously,

Therefore, summing up, the total value of FICN is likely Rs 400 crore and not Rs 2,000 crore. The 400 crore figure is not ‘old’ as Bibek Debroy claims. It is also certainly not a figure that can be traced back to P. Chidambaram or the previous UPA government as it was conducted by the Kolkata-based Statistical Institute over 2014-15 and under the supervision of the National Investigation Agency – which is a central government agency.

Note: This story was edited at 8:25 PM to include the years in which the NIA and ISI study was conducted. It also added the various counterfeit note estimates by India’s intelligence agencies.