With all the detected duplicate PAN cards being deactivated and there being only 645 fake PAN cards, why is the government pushing for drastic changes to India’s income tax structure? 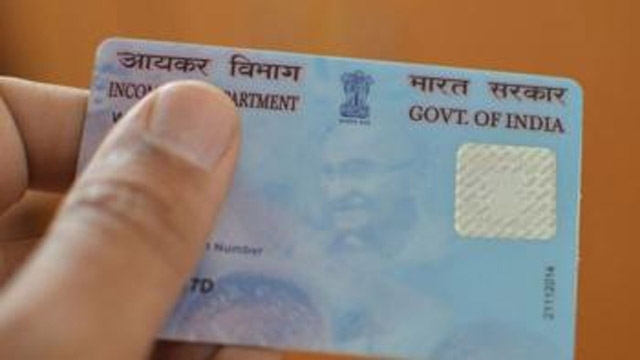 The issue of duplicate PAN cards is not as widespread as the government believes. Credit: PTI

In March this year, one of the main reasons the government gave for introducing the new section 139AA into the Income Tax Act, 1961, is that fake Permanent Account Number (PAN) cards were rife in circulation. The government’s idea is that the linking of Aadhaar cards to PAN cards will eventually weed out fake PAN cards. By this logic, the government has made it mandatory to link the two through section 139AA. The section says that without this linking, the PAN card will become invalid and a citizen will not be able to file their taxes anymore. This has now been challenged in the Supreme Court and the bench of Justice Arjan Kumar Sikri and Justice Ashok Bhushan heard the matter for six days; judgment is now reserved.

During the debate in parliament about introducing amendments to the Finance Bill, 2017, finance minister Arun Jaitely defended section 139AA saying, “In a situation where it has come to light that one citizen has up to five PAN cards, to avoid that, we have linked the PAN to Aadhaar.” This argument was repeated by attorney general Mukul Rohatgi before the Supreme Court, where he said that people and shell companies possessing multiple PAN cards were causing tax losses of thousands of crores of rupees. Nanden Nilekani also echoed similar arguments: “There are 250 Million PANs, but only about 40 million who file returns.”

How sound are these claims about the deluge of fake PAN cards? There are some possible answers in various documents and reports from the Ministry of Finance as well as many questions raised in parliament, over the last 17 years.

Assesses of the income tax department used to be identified by their General Index Register (GIR) number. This was essentially a manual system. The GIR number was unique only within an assessing officers ward or circle and not throughout the country. To overcome these shortcomings, the PAN (old series) was first introduced in 1972. Commissioners made the allotment of PAN to assessees under various assessing officers in their charge from within the block allotted to them. The main short comings of this old PAN were that no database was maintained and there was no check to avoid allotment of multiple PANs to a taxpayer. The allotment of PAN was not centralised, PAN was not permanent as jurisdiction of the assessee was part of the PAN and, therefore, was prone to changes with the change in jurisdiction for example.

A new series of PAN was devised which took care of these limitations. Allotment of current series of PAN was started in 1995 after studying the system of identification numbers practised in the UK (National Insurance Number), USA (Social Security Number), Spain (Fiscal Identification Number) and Australia (Tax File Number). Section 139A of the Act was amended in 1995 to enable allotment of PAN under this new series. By 1998, this was mandatory in the whole of India.

Structure of the new PAN

The new series of PAN is based on a few constant permanent parameters of a taxpayer, to ensure its uniqueness. These details include five core fields of information: the full name of the taxpayer, date of birth/incorporation, status, gender, father’s name. The PAN under the new series is allotted centrally by a customised application system for all-India uniqueness. The system automatically generates a 10 character PAN using the information in the above five core fields. This is a new concept to prevent allotment of more than one PAN to assesses with the same or similar names. At the time of PAN allotment, the phonetic PAN of the assessee is compared with the phonetic PANs of all the assesses to whom PAN has been allotted all over the nation. If a matching phonetic PAN is detected, a warning is given to the user and a duplicate phonetic PAN report is generated. In such cases, a new PAN can only be allotted if the assessing officer chooses to override the duplicate phonetic PAN detection.

In a reply to the Lok Sabha on February 3, 2017, the government said, “Overall, more than 25 crore PANs have been allotted so far.” Meanwhile, in another reply to the Rajya Sabha the last year, on August 9, 2016, the government informed the house that “the total number of taxpayers of income tax in the country for the Financial Year 2015-16 is 5,24,38,971.”

This means that the PAN card to tax payer ratio is around 4.77, which broadly matches with the finance minister’s sentiment in parliament, when he said that some people have five PAN cards. By a simple division, it would seem that there are nearly five PAN cards per registered tax payer.

But objective statistics can tell multiple stories. The American humourist Evan Esar said that statistics is “the science of producing unreliable facts from reliable figures.” So instead of rushing to conjecture, we have to examine why there is this huge gap between the number of PAN cards and the number of income tax payers.

First of all, PAN cards do not have any expiry dates, unlike passports and driving licenses. So this figure of 25 crore PAN cards which have been issued between 1995 till date, includes the cards of those who died in this same period.

A look at the Census data reveals that more than 19 crore people died between 1995 and 2016. A few crores of them would have been PAN holders. As long as their PAN numbers remain within the PAN database, we will not know how many of the 25 crore PAN cards belong to the deceased. Therefore to say there are five PAN cards per income tax payee, would be an incorrect.

Secondly, all PAN card holders are not tax payers. It is compulsory to quote PAN in all documents pertaining to various financial transactions prescribed under Rule 114B of the Income-tax Rules, 1962. This is amended from time to time to bring more transactions under monitoring and to widen the income tax net. PAN is also mandatory for everyone who falls in the criteria fixed in Section 139 A of the Income Tax Act, 1961. This issue was discussed in the third report of the Tax Administration Reform Committee Report (TRAC) in November 2014, which was submitted to the finance ministry. The report says, “to a significant extent, the difference reflects the use of PAN card as a proof of identity for various stipulated economic functions that have no relation to tax.”

The finance ministry in its accepted and implemented recommendations of the TRAC Report, was on the same side of the debate as the TRAC report, and made it clear that “PAN is being used voluntarily as an identification document by individuals, and the gap does not necessarily reflect number of non-filers.” The Central Bureau of Direct Taxes (CBDT) has also not raised many concerns about the gap between the number of PAN cards issued and the number of tax payers.

Duplicate PAN Cards are mainly generated because people who lost their PAN cards simply apply for fresh ones. Card holders are supposed to file an FIR for the loss of their card and apply for a reprint of the same with a copy of the FIR and the old PAN card’s number. In order to avoid this legal route, many people simply apply for a new card. Possessing a duplicate PAN card is in fact against the law and invokes a penalty of Rs 10,000.

Duplicate PAN Cards are detected during a de-duplication process. During the issue of the PAN card, through the Initial PAN Allotment System (IPAN) or Assessee Information System (AIS), the software uses phonetics-based algorithm to weed out duplicates. Duplicates are then deactivated after seeking explanation from the persons and also after a physical verification through concerned offices. This process of weeding out duplicates, was explained in parliament, in 2006.

An answer to a related question in 2007 told us that there are very few cases of misuse of duplicate PAN cards. The finance ministry also said that around 13 lakh people were found to have duplicate PANs and after de-duplication, this number was trimmed to 8.5 lakh people.

That same year, Sushma Swaraj raised a question on this and then finance minister P. Chidambaram answered it. Chidambaram said that the de-duplication of 11.43 lakh PAN holders had already been done.

Now compare this 11.57 lakh duplicate PAN cards with the total figure of 25 crore PAN cards issued. We can see that this is just 0.46% of the total PAN Cards issued and these were also deactivated by the income tax authorities.

The case of fake PAN cards is also significant. In 2005, this issue of forged cards was raised in Rajya Sabha, in an interesting case of a paan seller acting as a conduit for fake PAN cards. 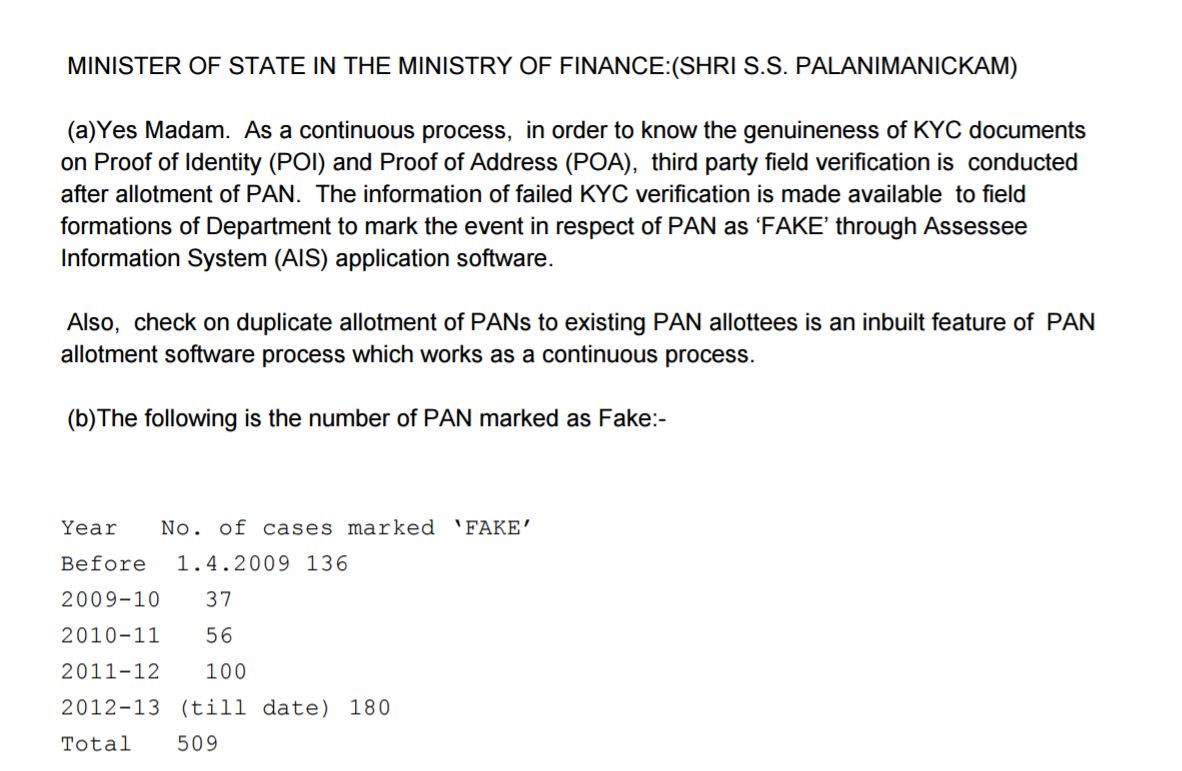 Nowadays, PAN cards are printed on the same material used for credit cards and with a hologram to curb any chances of tampering. Recently a newly improved design of PAN card has been introduced with machine readable QR-Code too.

What all this data realised by the government shows is that from official records, out of 25 crore PAN cards, only 0.46% or 11.57 lakh are actually duplicate. These have already been cleared from the system. Furthermore, the total number of fake PAN cards the government has found, is 645. Then there are other discounts to be made to the figures, once the data of deceased persons are subtracted. The data also needs to be subtracted for PAN holders who do not need to pay taxes and who might only use their cards as a proof of identity only.

So while the government continues to raise the issue of making Aadhaar cards compulsory to bring more tax compliance, and to crack down on duplicate and fake PAN cards, the data would suggest a disproportionality between the problem and its suggested solutions.

James Wilson is a member of the Mullaperiyar Special Cell. He tweets @jamewils.