If Anything, Demonetisation Slowed the Rate of Increase in Income Tax Base 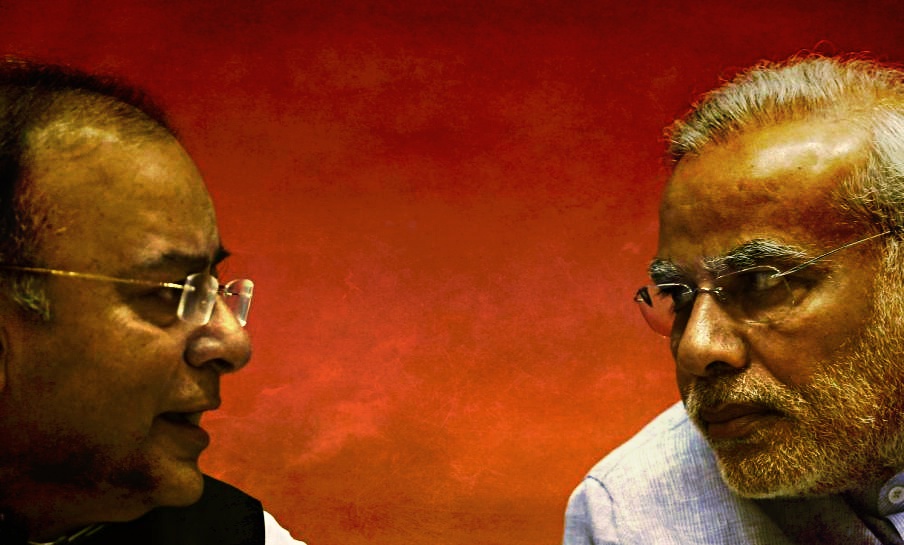 I am finally able to resolve the jigsaw puzzle of the number of tax payers added during FY 2016-17. In my last article in response to the clarifications issued by the Ministry of Finance on August 18, I pointed out the inconsistencies in their response. For instance, “Instead of waiting for all the data to come in and making a simple apples-with-apples comparison, why has it (the government) been throwing different numbers at the people?”

Let us have a quick recap of the various numbers given at various point of time by the government – 56 lakh, 5.4 lakh, 91 lakh and 33 lakh – for the increase in the number of taxpayers post-demonetisation.

The first number, 56 lakh, was the number mentioned by the prime minister during his Independence Day speech, but this number was comparing only the e-returns filed for a specific period (April 1 to August 5). This is the same figure given by the Central Board of Direct Taxes (CBDT) press release dated August 7, which claimed a jump of 25% in returns filed, leading the media to go into overdrive with the hyperbole that finally demonetisation was paying off. The last number, 33 lakh, disclosed to parliament on August 1, was a comparison of returns filed in the post-demonetisation period (November 9 to March 31). As these numbers are dealing only with partial data, any analysis using them will only lead to conjecture.

This left us with two numbers – 5.4 lakh, in the Economic Survey Volume II, and 91 lakh, mentioned by the finance minister in a press conference in May 2017.

The Ministry of Finance, in its clarifications dated August 18, said that the finance minister was talking about the total number of new returns filed during the entire financial year of 2016-17. However, all media at that point of time was reporting 91 lakh as the number of new returns filed post demonetisation. The Economic Survey, on the other hand, arrived at a figure of 5.4 lakh as the number of new tax payers, assuming the previous year’s growth rate as the reference growth rate. The Economic Survey explained how the figure was reached:

“According to the tax data, the number of new individual tax payers (based on returns filed) increased from 63.5 lakh in 2015-16 to 80.7 lakh in 2016-17. But all this increase cannot be attributed to demonetization because there is some natural trend increase in new taxpayers. Instead, this impact by measuring the increase in taxpayers in the post-demonetization period (Nov. 9, 2016-end-March 2017) relative to the increase in the same period the previous year is estimated.”

It is perplexing that the Economic Survey and the finance minister, referring to the total number of returns filed for FY 2016-17, give two different figures – 80.7 lakh and 91 lakh. Either one of these can be true, as both talk about the same data for the same period. 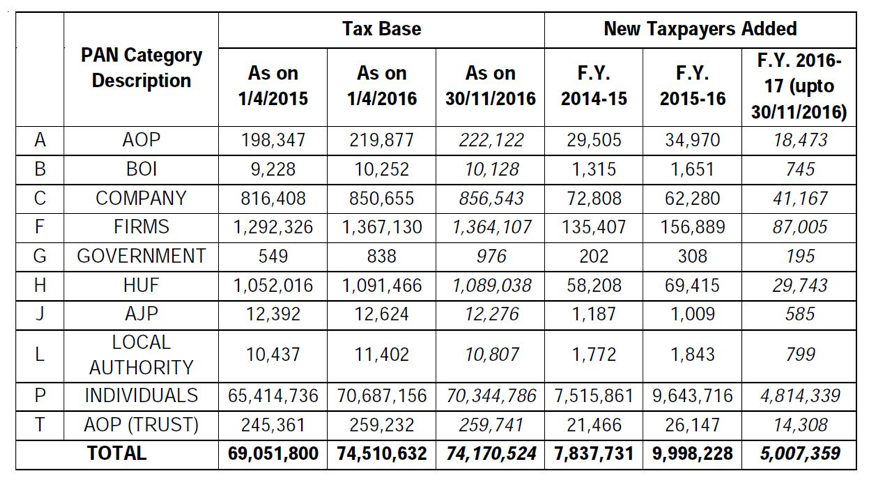 As the figure in the annual report pertaining to FY 2016-17 is part data upto November 2016, I have not used that to make a comparison. Instead, I have used a response to parliament, which gave the figure of new tax payers added during the FY 2016-17 at 1.26 crore. 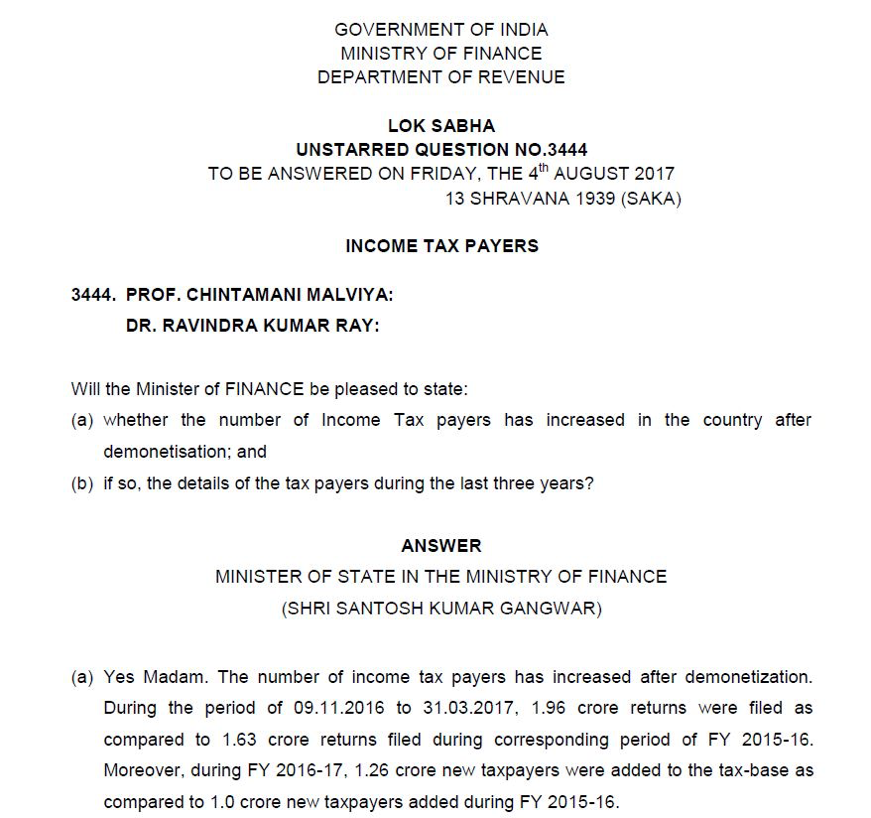 So the year-to-year growth of new tax payers added in 2016-17 is seen only as a jump of 26%, compared to 27.6% jump for the corresponding figure in 2015-16, which is clear from the graph shown below. If the Economic Survey had taken the ‘new tax payers added’ instead of ‘number of returns filed’, they could have reached a figure of negative growth due to demonetisation instead of meagre growth. 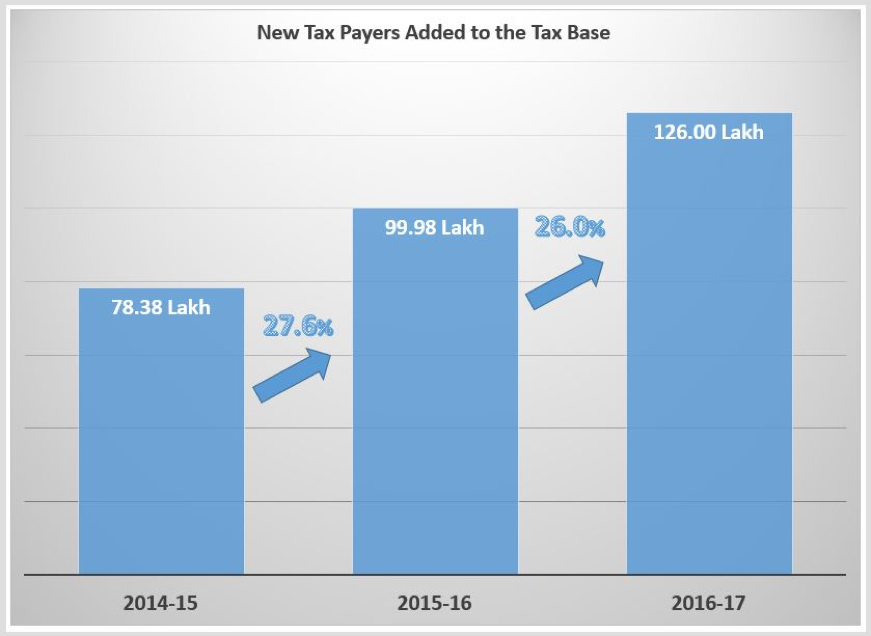 Source: Annual report of the Ministry of Finance; parliamentary question