One Year Later, There Can Be No Monetary Value Attached to the Destructive Costs of Demonetisation

While the negative impact of demonetisation can still be felt, the gains have been minor and could have been achieved even without the disruptive move. 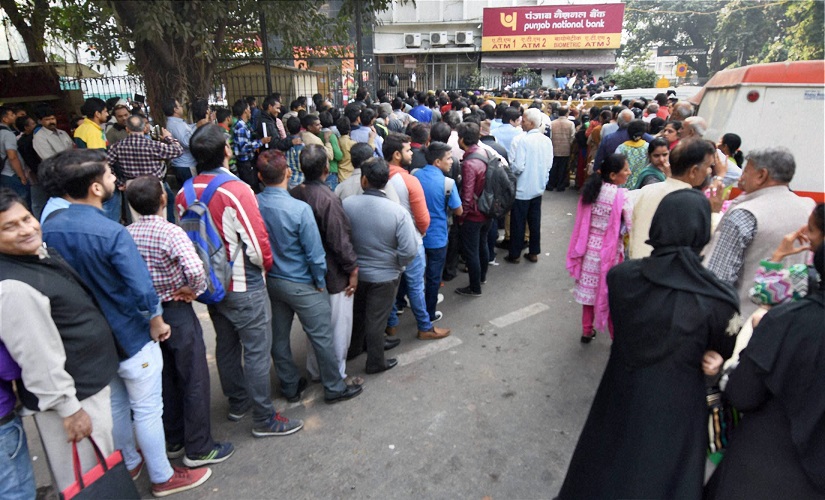 People standing in long queues to exchange their old Rs 500 and 1000 notes and withdraw cash from the ATM in New Delhi last year. Credit: PTI/Subhav Shukla/Files

Hundreds of millions of Indians went through toil and trouble for months after the announcement of demonetisation on November 8, 2016. It has got etched in their memory since they lost jobs, their businesses declined and incomes plummeted.

It was known theoretically that a sudden demonetisation would not solve the problem of black money but would damage the white economy severely. This is what has transpired in practice. The rate of growth of the white economy plunged due to the impact of a cash shortage in the unorganised sectors. The organised sectors also suffered, but less so because they can and do transact via cheques and electronically. They also recovered faster since the cash shortage declined more rapidly in the cities than in rural and semi-rural areas.

Rs 3-4 lakh crore out of the Rs 15.44 lakh crore demonetised were expected to not come back to the banks. However, according to the Reserve Bank of India (RBI), 99% of the old notes have come back so that only Rs 15,000 crore of the old notes remain with the public. Most of this is also expected to return or be accounted for. The worry is that since counterfeit currency may also have returned and got counted, the RBI may find that more than Rs 15.44 lakh crore has been collected by the banks – an embarrassment.

If some of the money had not returned, the government could have claimed that it managed to demobilise that much black money. There would have been a windfall for the RBI which could have been transferred to the budget as a dividend – a real gain of demonetisation. This could have helped lower the fiscal deficit or increase subsidies to the poor. It would have created a Robin Hood image for the prime minister – that he took from the rich bad guys and gave to the poor.

This image was independently reinforced by the common perception that demonetisation made the rich and the poor stand in the same bank queue. The resentment of the poor against the rich, that they have gained unjustly from a corrupt system, has been high. So even though no rich people had to stand in queues, the perception was politically important that the rich suffered losses due to demonetisation. It was as if justice was being finally meted out to the bad guys. The poor were willing to forget their own pain for the sake of such imagined instant justice.

The government made a virtue of the return of 99% of the cash to the banks. It changed its line to say that those who had deposited their black money would now be caught since they would have to disclose the source of the money. The government also argued that because of the fear of being caught, a large number of people joined the ranks of tax filers. However, the exact figure is not clear. The finance minister announced a figure of 91 lakh; the prime minister announced from the ramparts of the Red Fort that it was 56 lakh; the Economic Survey gave the number as 5.4 lakh. The Economic Survey also said that about Rs 3,500 crore extra tax was collected or about 0.3% extra direct tax – hardly a dent on the black economy.

Another argument goes that henceforth people would be afraid to generate black incomes. Unlikely, because if they could weather the storm now, they would also do so in the future. People’s consciousness about committing illegality has not been altered by demonetisation and that is the source of black incomes.

The investment climate in the country has deteriorated as capacity utilisation declined due to fall in demand. Government to show success of demonetisation has been issuing notices, closing down companies which are supposed to be shell companies. All this is being done rather indiscriminately. Government has faith in big data analytics which means computerised processing and indiscriminate issuing of notices.

For sensitive matters one needs a human judgment to figure out where fraud is committed. The government’s machinery for detecting it is woefully inadequate. It could barely handle the quantum of work in normal times and cannot take on the increased load that has been put on it now. Thus not much can be expected of the notices issued to people except that it has added to the uncertainty faced by businesses and that affects the investment climate further.

Banks were expected to benefit, with increased liquidity due to additional deposits. They were expected to lower interest rates and they did. They also lowered the interest rates on fixed deposits. As these returns declined, people shifted funds to the stock markets via mutual funds. This has made the financial markets highly unstable. While the economy has slipped, the markets have gone up, creating a speculative bubble. The price-earnings ratio has risen to record levels. So returns on these funds are based on capital appreciation and not the dividends resulting from higher profitability. Sooner or later, this can go bust with negative implications for the economy. 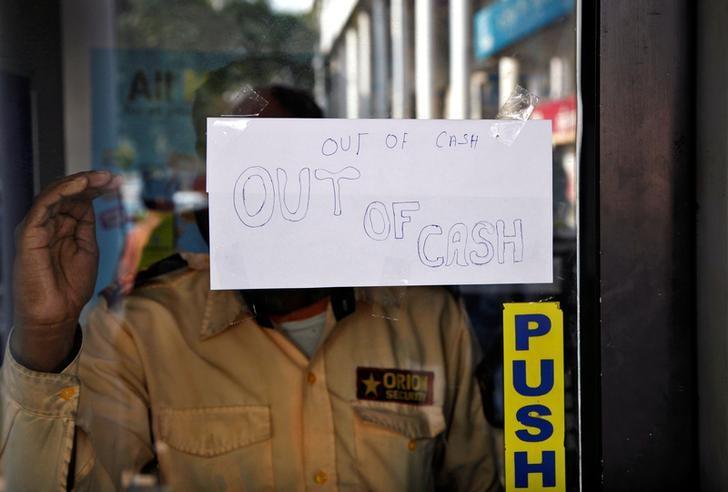 A notice is displayed on the gate of an automated teller machine (ATM) counter which is no longer dispensing cash in Chandigarh, India, November 21, 2016. Credit: Reuters/Ajay Verma/Files

The government said that in the short run there would be pain but in the long run things would improve. However, the pain has not been short run. It has continued way beyond the December 30 deadline set by the prime minister. People suffered due to the loss of jobs, closure of production units, standing in lines to get their money exchanged and so on. The cost to the nation was not just economic but also political and social.

As the rate of growth turned negative, capacity utilisation declined and that resulted in a drop in investment to the lowest point in the preceding nine quarters. This has lowered the growth profile in the long run. In brief, the notes shortage converted itself from a short run to a long run problem.

The government, realising that demonetisation was not effective against the black economy, changed the goal post and argued that the move would lead to a `cashless’ economy. Soon, the line changed to a `less cash’ economy. But, this could have been done independently of demonetisation. And also, it requires a lot of preparation, like reliable internet connectivity, assured electricity and other infrastructure. Above all, there is need for financial literary, cyber security and regulation so that people feel comfortable using digital transactions.

Thus while the black economy was not impacted and the other claims of benefit accruing due to demonetisation are not only minor but also could have been achieved without demonetisation, the costs to society were enormous. If the economy had a zero rate of growth for 2016-17 due to the massive decline in November to January, the economy lost 7% growth which amounts to about Rs 10 lakh crore. Add to this the costs to the banks and RBI.

No monetary value can be attached to the social costs. People suffered in a variety of ways. But even more importantly, institutions got damaged and that has long-term consequences. The credibility of the RBI, banks and cash got eroded. The social divide between the unorganised and the organised sectors became wider. This brings into question the nature of our democracy in which a vast majority of the people can be marginalised. Those who never generated any black incomes were penalised, while those who generated black money escaped without many consequences.

Arun Kumar is Malcolm Adiseshiah Chair Professor at the Institute of Social Sciences, and author of the forthcoming book Demonetization and the Black Economy, Penguin (India).