Shadows of the Pandemic: What the Latest GDP Numbers Tell us about the Nature of India's Recovery

None of the big drivers of economic growth are contributing to the 0.5% growth of the economy over 2019-20. So, where is this paltry growth coming from? The second quarter (Q2, 2021-22) gross domestic product (GDP) figures were released on November 30, 2021. They testify that the Indian economy is now recovering from its steep decline at the start of the pandemic in March-April 2020. This is a happy augury. However, the official claims are not borne out by a deeper analysis of the data.

Sector wise the picture is mixed. Compared to Q2 of 2019-20, there has been good growth in agriculture, mining and public administration but marginal growth in manufacturing. Construction sector has stagnated while major services have declined like trade, hotels, transport and communication. Finance and real estate sector have grown marginally.

There is another way of looking at the performance in Q2 of 2021-22. If the pandemic had not struck then, the economy would have grown in the last two years by say, the growth in the last quarter before the pandemic, that is, Q4 of 2019-20. In that quarter, the growth rate had been at a low of 3.1%. So, over the two years, the economy would have grown by 6.3%. In other words, as compared to the potential GVA, the economy is still down by 5.8%.

The implication is that jobs and incomes are down compared to where they could have been. Comparison of nominal GDP of the current quarter with that of Q1 of 2020-21, when the pandemic started, there is a 10.2% increase in prices. Thus, in a period when a large number of people lost incomes due to loss of work and cut in wages and salaries, there was a further impact of inflation in depressing real incomes. This has had a big impact on demand, leading to a tepid recovery. The Reserve Bank of India (RBI) data on current level of consumer confidence reflects this. It is largely based on the organised sectors and was at 57.7 in September and at 48.6 in June during the second wave. These are far lower than the peak of 104 in March 2019.

Much hype is created about revenge consumption and pent up demand in the economy. Does this demand come from the poor? Do they buy cars or luxury products? This phenomenon pertains only to the well-off sections and the organised sectors. The Delhi Socio-economic survey suggests that in 2018, 90% of the families in the country spent less than Rs 10,000 per month. They would have barely met their essential consumption. Further, they are the ones who lost incomes and employment. So, could they be indulging in revenge consumption projected by the media?

Private sector spending by consumers, known as private final consumption expenditure, has still not reached the 2019 levels. In Q2 of 2019-20, it was Rs 20.19 lakh crore, which is now Rs 19.48 lakh crore. This largely pertains to the organised sectors. Similarly, government expenditure has also come down to Rs 3.61 lakh crore from Rs 4.34 lakh crore in 2019-20. Capital formation, which is considered to be an investment, is almost at 2019 levels. Exports are dramatically higher by Rs 1.22 lakh crore and imports are higher by Rs 1.3 lakh crore. Thus, the external sector does not provide a boost (exports – imports) to the growth rate.

In brief, none of the big drivers of economic growth are contributing to the 0.5% growth of the economy over 2019-20. So, where is this paltry growth coming from?

Valuables, that is, precious items like, gold, silver and jewelry, is one of them. Its contribution has increased by 270% from Rs 44,000 crore to Rs 1.2 lakh crore. The other source is the “discrepancies” which have risen by 256% from Rs 27,000 crore to Rs 96,100 crore. They reflect the gaps in data – a likely result of difficulties in data collection, especially from the unorganised sectors.

Thus, production has not risen by even 0.5% over Q2 2019-20. There is a potential decline of Rs 1.29 lakh crore – a 3.62% fall. People are likely to be buying more of valuables due to much greater uncertainty and the increase in liquidity in the market in which they want to invest. Clearly, if production is lower, capacity utilization would decline. RBI’s latest data on this is for Q1 2021-22 when it had dropped to 60% from 69.4% in the previous quarter. This data is entirely from the organised sector and does not capture what happened to the unorganised sectors of the economy which faced a slump during the second wave. With low capacity utilization, investment in the economy stagnates and growth does not pick up. 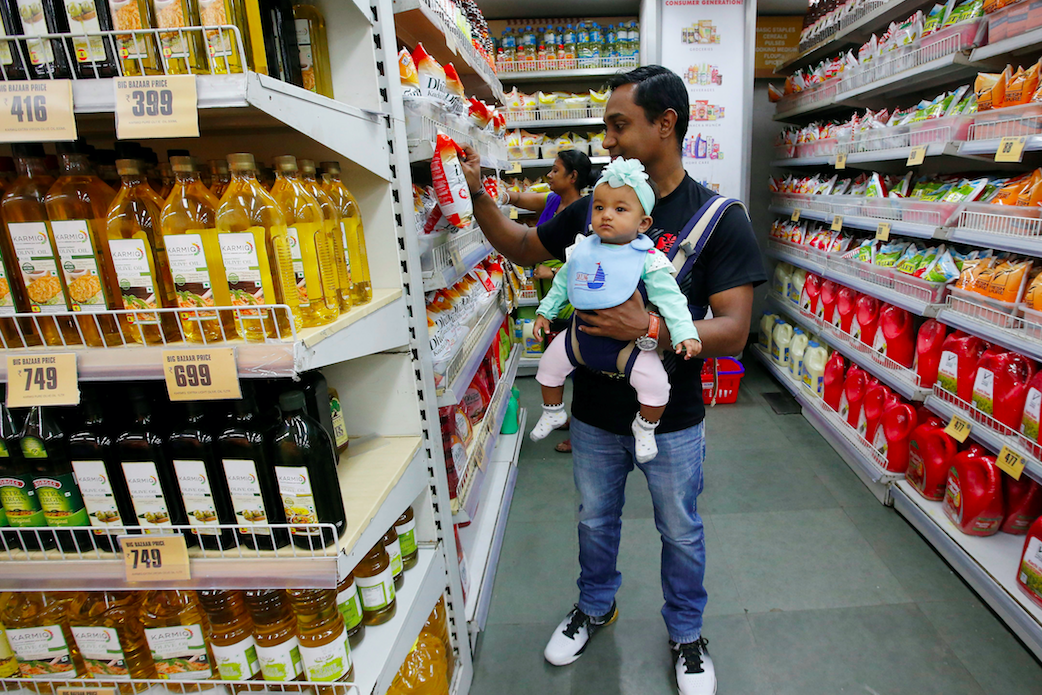 Representative image of a man shopping for food with his child. Photo: Reuters

As this author has repeatedly pointed out since the time of demonetisation, the unorganised sector, which contributes 45% of the GDP, remains mostly unrepresented in our GDP data. This is especially so for the quarterly figures. Most of the available data is from the organised sector. That too forms just a part of it, like for the manufacturing sector, data is taken from companies which presents their annual report in that quarter. These may be a few hundred companies only. How can they represent the 6,000 companies in the stock market and the 600,000 SME units? Much less the 60 million micro units in the country.

Agriculture is a part of the unorganised sector and contributes 14% of the GDP. It is also not fully captured since it is assumed that the targets would be achieved. But agriculture production is highly variable given the vagaries of weather. Both excess rains and drought impact agricultural production and targets go awry.

The rest of the unorganised sector, contributing 31% of the GDP, is assumed to grow at the same rate as the organised sector. That is, the latter is used as a proxy for the former which is incorrect, especially since the time of demonetisation. COVID 19 has also impacted it deeply. The unorganised sector works with little capital which got wiped out due to closures. It has found it difficult to revive and reports are saying that there have been many closures of such units.

Extent of decline in the unorganised sectors

If the rise in prices is deducted from these nominal figures, the real sales of corporate sector grew in real terms by about 12.8%. Officially the GDP growth in Q4 2020-21 (year-on-year) was 1.6%. Assume that agriculture grew at 4%. Then the non-agriculture unorganised sector would have declined by 19.35% in Q4 of 2020-21. This trend is likely to have continued but we have to wait for more data to come out.

The official data is likely to have been further vitiated by the fact that sectors like education and health have been severely impacted. The children of the poor have dropped out of schools and many have shifted from private to government schools with the former closing down in many instances. In the case of health sector, there was massive black marketing that would have impacted health expenditure of citizens but this black marketing would not be captured by data.

To conclude, the growth rate figures officially given are deeply flawed because they do not reveal the true picture of the Indian economy hit by the pandemic. Even going by the official data, the Indian economy has not yet recovered to its pre-pandemic level. For any realistic planning, to cope with the crisis brought about by the pandemic, correct data is needed. Presently, the flawed data has induced complacency and invisiblized the declining unorganised sectors of the economy which employs 94% of the workforce. That is the crisis hidden behind the official growth projections.

Arun Kumar is Malcolm Adiseshiah Chair Professor, Institute of Social Sciences and author of Indian Economy’s Greatest Crisis: Impact of the Coronavirus and the Road Ahead, 2020. Penguin Random House.