Key schemes exclusively for women are trapped in a vicious cycle of underutilisation of funds, leading to low allocations. This is a challenge as higher allocations are required for expanded coverage and better service delivery. 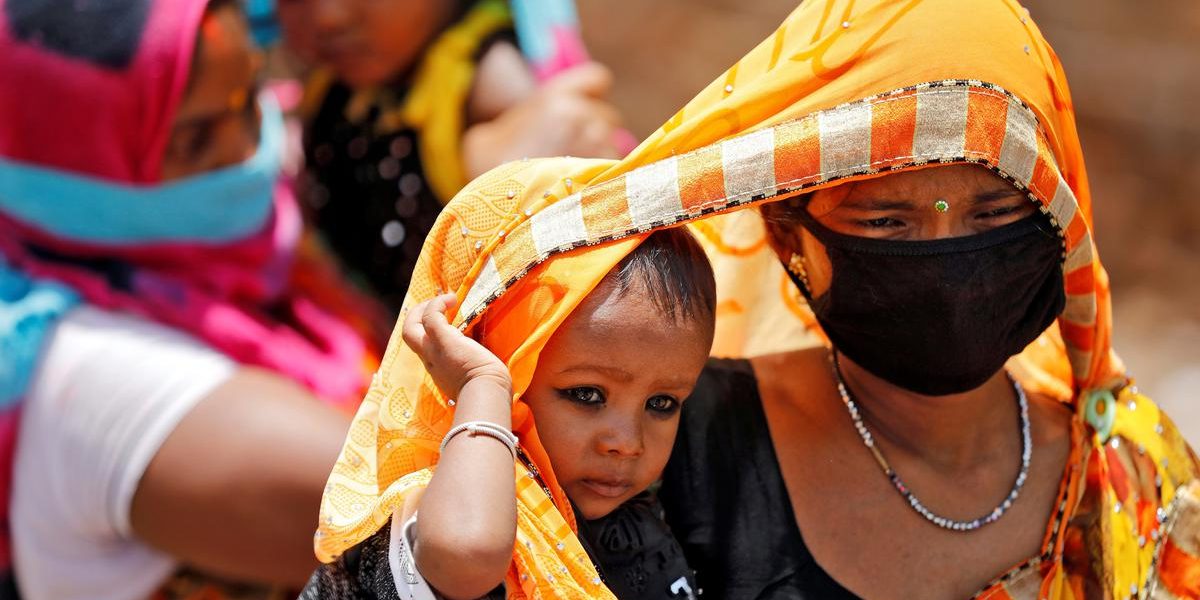 Following a year that was particularly difficult for women, the Union Budget 2021-22 must deliver on key schemes and sectors which are important for women’s welfare and gender equality. In 2020, women lost jobs in large numbers, struggled to access health services, had trouble accessing COVID-19 relief measures and suffered greater violence. Dalit, Adivasi and Muslim women were disproportionately affected, bearing the brunt of heightened discrimination and greater economic insecurity.

By way of targeted COVID relief for women, the Centre announced a payment of Rs 1,500 for women with Jan Dhan accounts, which did not reach many beneficiaries because of lack of awareness and inactive accounts.

During crises, schemes for women are often among the soft targets for budget cuts. However, gender responsive public investment must be prioritised in 2021-22, both for immediate economic recovery and long-term development gains.

For the past ten years, the share of the gender budget in the total Union Budget has stagnated at around 5%. The Gender Budget Statement (GBS) includes total allocations for women-specific schemes (Part A) and up to 33% of allocations for select schemes not exclusively aimed at women (Part B). However, the GBS does not convey an accurate picture of actual public spending on women.

Part A includes some schemes not exclusively for women, and Part B underreports allocations in some instances, includes many schemes without clear justification, and excludes some relevant schemes altogether.

Key schemes exclusively for women are trapped in a vicious cycle of underutilisation of funds leading to low allocations. This is a challenge as higher allocations are required for expanded coverage and better service delivery, in context of poor gender indicators, aggravated by the COVID crisis.

In the first ten months of 2019-20, less than half of the allocated funds were spent under several key schemes for women.

Source: Parliamentary Standing Committee Report on Demand for Grants 2020-21 of the Ministry of Women and Child Development

In 2020-21, the allocations approved for many schemes fell short of the amounts proposed by the nodal Ministry of Women and Child Development (MWCD); by 13% for PMMVY, 15% for Anganwadi Services, 21% for Beti Bachao Beti Padhao and 25% for National Creche Scheme. Of the allocations made, very little was spent due to COVID-related disruptions. The MWCD had only spent 42% of its budget by November 2020, compared to 60% spent in the same period last year. This could lead to reductions in allocations in the upcoming budget, which must be averted.

Even prior to COVID, women’s rate of work participation was worrying; in 2017-18, it touched a historic low of 17.5%, an analysis of NSSO data shows. During the pandemic, it has worsened because of increased burden of unpaid care work, spending more time queuing up at community water taps and the increase in gender-based violence against women. While more men lost their jobs in absolute numbers, job recovery has been slower for women.

The Mahatma Gandhi National Rural Employment Guarantee Scheme (MGNREGS) is critical from a gender perspective as women have consistently accounted for more than half of the work participation under the scheme. However, in 2020-21, the share of women in total person days-of-work generated fell to its lowest since 2013-14, at 52.46 per cent, as shown by data on the MGNREGS portal. This may have been because of increased participation by returning male migrant workers.

In response to the COVID crisis, the Centre hiked wages under MGNREGS and provisioned an additional Rs. 40,000 crore for the scheme in 2020-21. Given the high demand for work and increased unemployment among women, a correspondingly higher amount should be budgeted for the scheme in 2021-22. The number of work days and work schemes should be increased, minimum norms for creche facilities should be eased, and more women supervisors should be hired. The government should also introduce an urban employment guarantee scheme on the lines on MGNREGS.

Adequate childcare facilities are critical for increasing women’s employment. The National Creche Scheme, following the decision to reduce the Centre’s contribution to funding in 2017, has been plagued by non-payment of grants to creches. Along with releasing the withheld grants, the Centre must budget for the expansion of this scheme and provide greater financial support to States.

Expanding the net of social protection for women

The COVID crisis has exposed the need for greater social protection in India, in the form of health insurance, maternity benefits, old age pensions, disability assistance, and other assistance for the marginalised.

In 2019, maternity benefits under PMMVY reached only 31% of intended beneficiaries, that is, women who have delivered their first child. Utilisation of funds under the scheme is low, and in 2019-20, many States reported zero or very little utilisation. With women coming under greater economic distress, eligibility of the scheme should be widened and the amount of benefits increased. This would require greater allocation in 2021-22, irrespective of the level of unutilised funds.

The National Social Assistance Programme (NSAP) provides monthly pensions of Rs. 300 per for widows, Rs. 200-500 as old age pension, and Rs. 300 as disability pension. The long-standing demand to increase these amounts must be met.

ASHA and Anganwadi workers, who have played key roles in tacking the pandemic, must be given ‘employee’ status and get increased remuneration.

One-third of women workers are estimated to be home-based; these women are often excluded from health insurance, maternity benefits and pensions. Resources must be provisioned to include these workers under the Employees’s State Insurance Scheme. Investment is also needed to improve basic infrastructure in the low-income settlements where such workers tend to live.

In 2020, the National Commission for Women received 23,722 complaints of crimes against women, of which one-fourth were of domestic violence. This is the highest number of complaints received in the past six years. The most complaints were from Uttar Pradesh, Delhi, Haryana and Maharashtra.

The Nirbhaya Fund, which was set up to improve women’s safety, has seen abysmally low utilisation. In 2019, not even 30% of the funds released by four implementing Ministries were utilised.

Table: Funds released and utilised by ministries under Nirbhaya Fund (in Rs. Lakh)

Addressing the growing incidence of gender-based violence will require these funds to be expedited. Further, States should be granted more flexibility to repurpose allotted funds towards preferred initiatives and programmes for women’s safety.

Other important schemes for empowering and protecting women have also seen consistent underutilisation of the limited resources allocated to them. These include Ujjawala which works on rescuing and rehabilitating victims of trafficking, and Swadhar Greh, which provides food, shelter and medical services to women in difficult circumstances. Both schemes have seen a decline in beneficiaries since 2015-16. 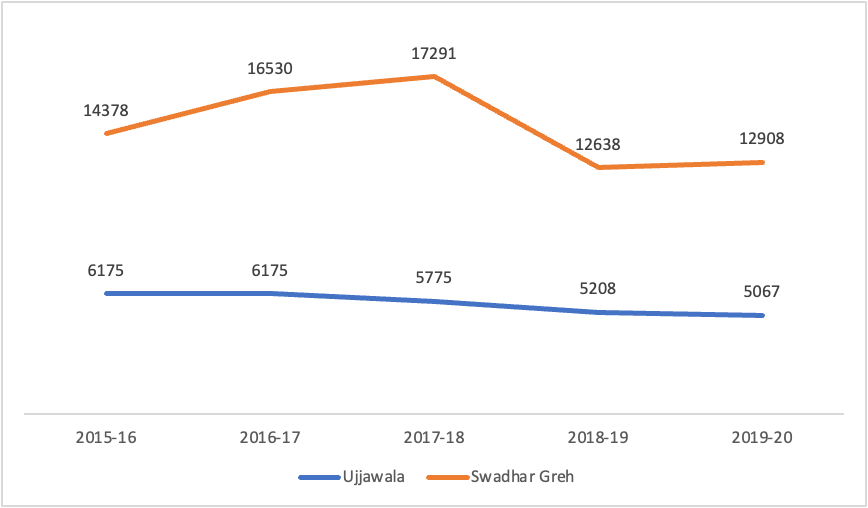 Source: Ministry of Women and Child Development, 2020In context of growing violence against women and economic insecurity, the government should budget for increased coverage of the services under these schemes.

Shruti Ambast and Drishti Rastogi work at Centre for Budget Governance and Accountability.