COVID-19's Economic Blow will be Unprecedented. India Must Rise to the Challenge.

An income transfer to the most vulnerable should be the immediate move. 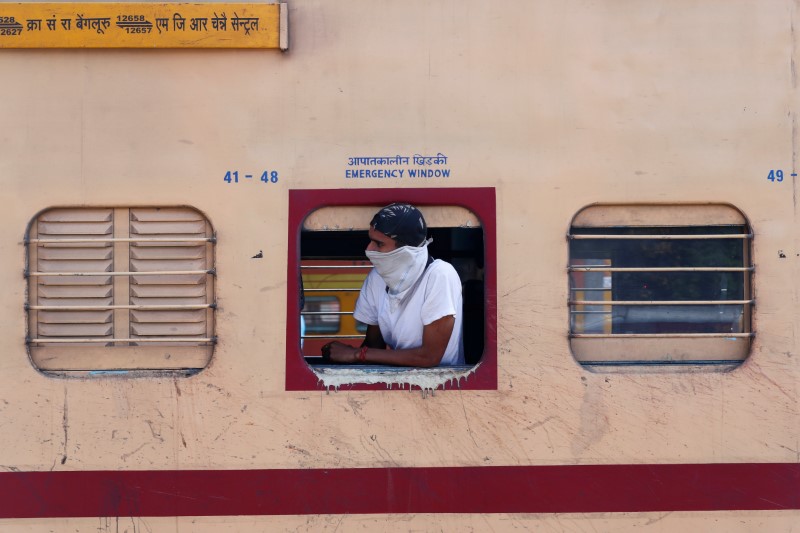 A man with his face covered looks out from a train during lockdown by the authorities to limit the spreading of coronavirus disease (COVID-19), in New Delhi, India March 23, 2020. Photo: Reuters/Adnan Abidi

The lockdown of entire cities, and consequent suspension of all economic activity, will first destroy the incomes of the poor.

Recognising this reality, both the US and UK governments have proposed immediate income support to individual workers vulnerable to the shutdown of economic activity. India needs to do  the same without delay. For India, this is a more acute problem because nearly 50% of its workforce is self-employed and over 95% of  workers are in the unorganised sector.

This section of the population was not seen on TV channels yesterday, clanking plates and vessels and marking the success of the “janata curfew” proposed by Prime Minister Modi. The class composition of those showing up on their balconies in upscale colonies across cities on Sunday showed that they were clearly not worried about how they are going to eat for the next few months or how they would manage to pay school fees for their children.

It is the incomes of the unorganised and informal sector workers which will get destroyed immediately. And this segment may not have enough savings to last out even a few months.

The negative impact on the poor of shutting down economic activity for a few months is not a new experience for the Narendra Modi government. Demonetisation saw the informal sector ravaged like never before and its ripple effect continued to haunt the economy as India saw 45-year high in unemployment in subsequent years and a negative growth in private consumption for the first time in 40 years.

India’s economy was already in a manufacturing recession with core sectors like oil, gas, electricity etc. showing negative growth in the last two quarters of 2019. In a way, COVID-19 has hit India’s economy at a very vulnerable time when it faces an investment drought, high unemployment and almost non-existent rural wage growth and consumption.

So when the government shuts down economic activity to counter COVID-19 it knows there will be further destruction of employment and income. Therefore the first thing the government must do is make an income transfer to the daily wage earners and self employed in the country. Given progress made in technology it will not be difficult to identify the vulnerable sections.

Small businesses employ a large number of workers in the organised and unorganised sectors. It is not enough for the prime minister to suggest they must ensure the employees are not sacked due to business losses. Big companies can withstand heavy losses for three to six months. Small and micro enterprises may not be able to do so. The government can give them a deferment in interest payment for three to six months and even give them a moratorium on Goods and Services Tax (GST) payment for some months so that their cash flows do not get affected.

In any case, 95% of all GST revenue comes from 10% of the large businesses registered with GST network. Giving small businesses a GST holiday for six months is worth exploring.

The government must proactively release all pending payments to the private sector for execution of public projects. This will improve the cash flow of these businesses. In these times of coordinated fiscal and monetary stimulus across the world India must also be proactive with all its available tools. India has a lot more monetary space than its western counterparts.

Unconventional interventions in lending via regulatory forbearance are being suggested by many experts. A trial and error combination of fiscal and monetary measures is unavoidable in the current circumstances.

If oil prices stay under $35 a barrel for the year the government will end up saving about Rs 3 lakh crore which it must put to good use. If it does not bring down domestic oil prices it must use the funds raised via higher taxes as direct income transfer to the poor and vulnerable sections.

Most economists now forecast a global recession as a base case if COVID-19 leads to a shutdown of economic activity until May 2020. Before COVID-19 arrived, much of the world was already staring at either a recession or a severe slowdown. Even the US economy, the sole bright spot, had begun to somewhat slow down in January-February. The oil price crash has sent the US economy into a tailspin, leading to a virtual shut down of its shale oil industry where $120 billion of loans have turned bad as companies go into bankruptcy. So the only economy which was relatively in good shape is now hurtling to a certain recession.

Financial markets across the world are in continuous turmoil and most analysts admit that the usual tools of analysis are not helping understand what is going on. The speed with which stock markets collapsed in the US – 32% in just 18 days – matches the collapse in 1929 before the Great Depression.

For some time there  was a flight to safety as global capital, seeking safe haven,  had started moving to gold and US government bonds. But after sometime even safe havens like gold and US treasury price movements started becoming uncertain and volatile. This was indeed the scariest moment for many financial market experts.

In this backdrop the rupee is rapidly declining as foreign capital leaves Indian shores. The rupee’s exchange rate is down to Rs 76 to a dollar. The only consolation is that other emerging market  currencies are falling by similar magnitude or even more. Though India has $480 billion in forex reserves, one can never be sure how much is adequate to deal with unprecedented and continuing turmoil in the global financial markets.

Cheap money has been flooding the global markets since 2008. The US Fed balance sheet expanded five times to $4.5 trillion between 2008 and 2017. This was just printing more and more money. Now an additional $700 billion of debt purchases have been announced by the US Fed. This affects the financial system of the rest of the world. Remember the famous words of a US Fed chief, “The dollar is our currency but your problem.” This financial virus has been infecting the world much before coronavirus came into the picture.

US economists now suggest there is a big corporate debt bubble – as opposed to the housing debt bubble of 2008- which is hurting the American economy.

Also read: On Coronavirus, Naveen Patnaik Has Emerged a Visionary

India too faces its own version of the corporate debt bubble which has played havoc with its financial system – Yes Bank being the latest case – with no light visible at the end of the tunnel. India will have to keep a close watch on its real economy as well as the financial system which is quite fragile, unlike in 2008 when it was relatively in a much better shape. Remember the Indian economy grew at 7-8% for two years after 2008-09. Of course, fiscal excesses weakened the economy subsequently. There are a lot of learnings from the past.

The only silver lining for India so far is that the number of fatalities and new cases of novel coronavirus is less than in most countries as a ratio of our population. If India manages to keep it this way over the next three months then it can hope to bring incomes, employment and consumption back on stream faster than others.

India still remains relatively a domestically-driven economy. So, theoretically, we can bounce back faster than other economies. This is all we can hope for as the world faces too many unknowables to make any firm predictions even in the short run.