22 Migrant Workers, Kin Have Died Trying to Return Home Since the Lockdown Started

The total number of lockdown-related deaths stands at 24. 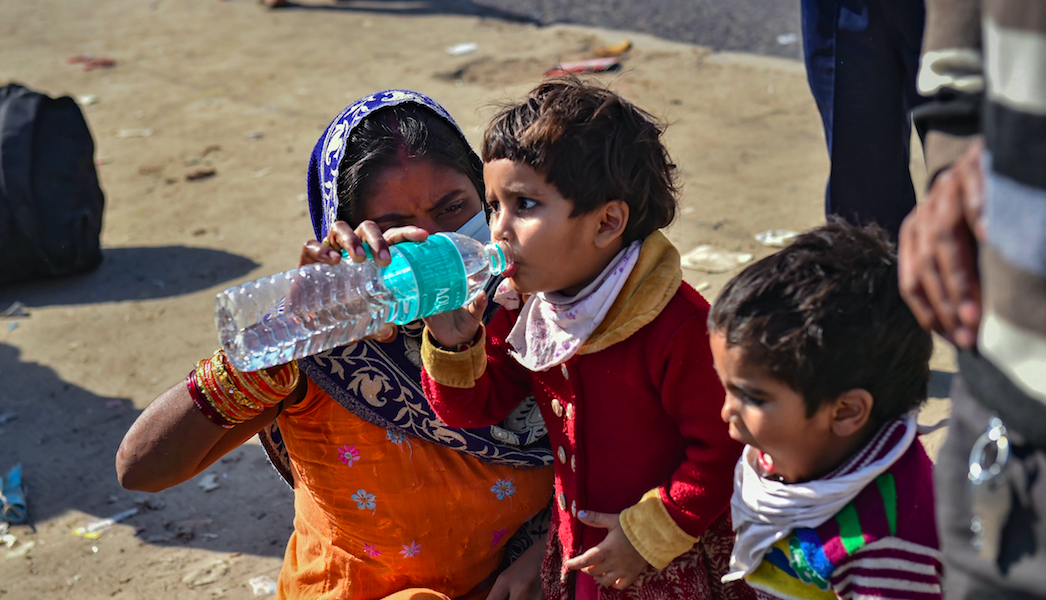 Migrant workers along with their family members take rest after they set forth to their their villages on foot, amid a nationwide lockdown in wake of coronavirus pandemic, at Lal Quarter Bus Stand in New Delhi, Sunday, March 29, 2020. Photo: PTI

New Delhi: At least 17 migrant labourers and their family members – including five children – have lost their lives so far in the course of their desperate efforts to return home since Prime Minister Narendra Modi announced on March 24 that a 21-day lockdown would kick off within four hours. The total number of lockdown-related deaths stands at 22.

Aside from these deaths, and those of two others who were not migrant workers, an 11-year-old boy also reportedly died of hunger on March 27 in Bhojpur area of Bihar as the family could not arrange for food due to the strict implementation of the lockdown. The total number of deaths due to the lockdown is now 20.

On March 23, Modi announced the three-week national lockdown at 8 pm. Since stores and vendors selling essentials typically bring their shutters down in many parts of the country by that hour, particularly in small towns and villages, Modi’s sudden announcement triggered considerable panic among the public countrywide, forcing people to step out of their homes to procure food and other necessary items that night itself – thus overturning the very principle of social distancing the prime minister had advocated.

The Central and state governments also had not devised any arrangement for those who survive on daily wages. This led daily wage earners to take to the roads and walk hundreds of kilometres to reach the safety of their homes in different states. Instructed to implement the lockdown strictly, the police in several areas also lathi-charged them. They also meted out other forms of ‘punishment’ to those found walking on the roads by themselves, an act which may have broken the strict lockdown norm even if there was not necessarily any violation of the principle of social distancing.

A Twitter thread of published news reports collated till March 29 morning by @_kanikas_, a postgraduate student of Emory University in Georgia, highlighted the horror of the march of migrant workers back home by foot or hopping on to any available vehicle.

According to the latest news reports, a 39-year-old man, employed by a restaurant in Delhi as a home delivery worker, died in Agra on March 28 while on his way to the Morena district of Madhya Pradesh. By the time he arrived exhausted in Agra, he had covered around 200 km by foot. A resident of Badfa village of the district, the man has been identified as Ranveer Singh, a father of three children. He was employed in a restaurant in Tughlakabad area of Delhi for the last three years.

A Times of India report said, after his death, the police took his body for post mortem. Saurabh Dixit, the commanding officer Hariparvat area of Agra, was quoted in the report as having said, “The autopsy revealed heart attack as the cause of death, but considering his travel history, we assume that exhaustion of long walk might have triggered his existing heart condition.”

On March 29 morning, a tweet posted by Sonu Yadav, a senior correspondent of Navbharat Times reporting from Gurgaon, had it that a fast moving canter hit as many as five persons belonging to migrant labour families while they were walking home in the Bilaspur area of Haryana, leaving all of them dead. He said the dead included women and two children. Yadav’s tweet said the Bilaspur Police “is trying to identify the dead. None of the dead had any identity cards with them.”

However, reports by ANI and India TV later said the number of dead was four and four others were injured.  Both the news reports said the accident occurred on the Kundli-Manesar-Palwal Expressway on March 29 early morning. The India TV report said, “The incident took place when eight people were walking on the expressway, heading towards their hometown amid coronavirus lockdown.”

On March 27 night, in Telangana too, eight persons belonging to a group of migrant labourers returning to their homes in Raichur district in neighbouring Karnataka were killed in a road accident. Those dead included an 18-month-old baby, a boy and a nine-year-old girl.

An Indian Express report said the accident, which happened on the outskirts of Hyderabad, also left four women and two men with severe injuries.

“In view of the nationwide lockdown, 31 migrant labourers employed by a construction firm in Suryapet district of Telangana were travelling in a Bolero max open truck when their vehicle was hit by a truck loaded with mangoes from the rear,” it said.

The injured are at present being treated at Osmania General Hospital while the rest of the migrants have been put up at a camp in Shamshabad town in Ranga Reddy district. 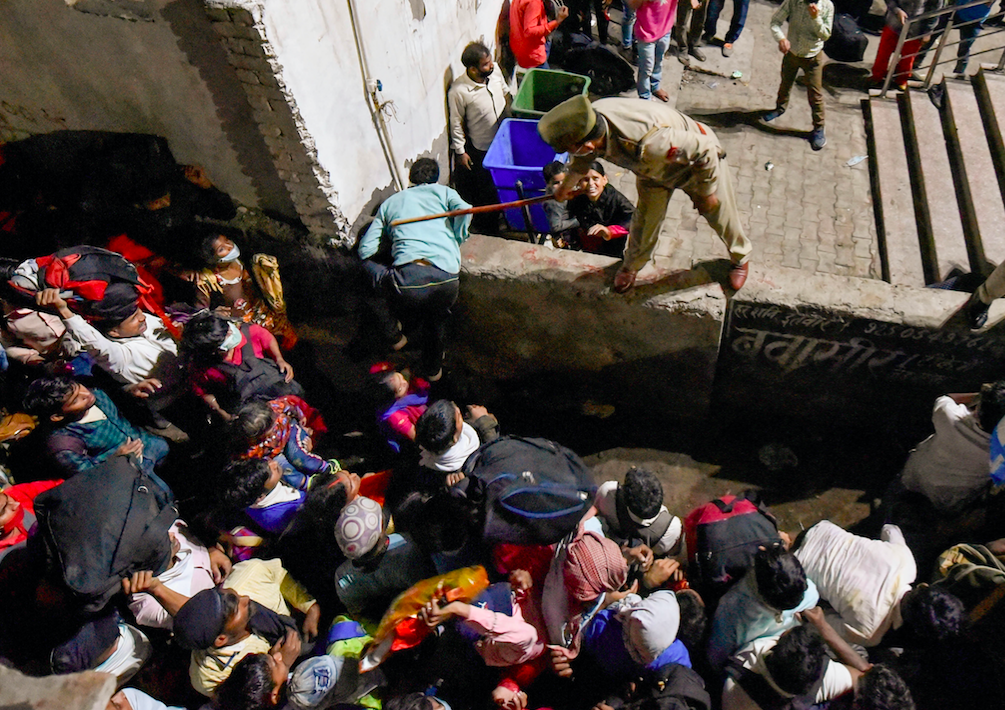 A policeman tries to regulate as migrants try to cross a boundary wall in an attempt to board a bus to their native villages during a nationwide lockdown, imposed in the wake of coronavirus pandemic at Kaushambi, in Ghaziabad, Saturday, March 28, 2020. Photo: PTI

“He fell unconscious on the road near his house in Pandesara and was taken back to the hospital where he was declared brought dead,” the report said

In yet another case of road accident faced by migrant labourers walking home due to non-availability of any other means of communication due to the lockdown, four persons were run over by a truck at Virar on the Mumbai-Gujarat highway on March 28. According to news reports, the incident occurred at around 3 am.

Reports said the migrant labourers, who were originally from Rajasthan, had tried to return home. They were a group of seven persons, including some who worked at tea stalls and canteens in Mumbai which had closed down due to the lockdown. However, they were turned back by police from Bhillad on the Maharashtra-Gujarat border and were returning to Virar when the accident took place. The four deceased were identified as Ramesh Bhatt (55), Nikhil Pandey (32), Naresh Kalusuva (18) and Lauram Bhagora (18), all from Baswada in Rajasthan, the report added.

On Saturday, a 26-year-old migrant worker was killed in the Pakwarha area of Moradabad while walking from Sonipat, Haryana to his village in Rampur, Uttar Pradesh. Nitin Kumar, a shoe factory employee, had decided to walk home after the lockdown was announced and was hit by a private bus on the road.

Nitin’s younger brother Pankaj was also walking with him. Police have seized the bus and are reportedly probing how it was running despite the lockdown.

The first deaths due to the lockdown occurred in Tamil Nadu. Four people – including a one-year-old baby– died in a forest fire in Theni district while taking the forest path home from the estate they worked at, due to the lack of motorised transport. “This path was frequented around 15 years ago. After motorised transport came in, most of the workers took jeeps sent by the estate into Kerala, thus rendering the path unused. Ever since the borders between Tamil Nadu and Kerala have closed due to COVID-19, there has been a spike in the number of illegal paths used,” the district forest officer told The Hindu.

Another death due to the lockdown – though of a migrant worker – occurred in West Bengal on March 26. A 32-year-old man, identified as Lal Swami, had stepped out of his house in Howrah to buy milk when he was reportedly beaten by police. A heart patient, he died soon after.

Another Indian Express report on March 28, from Surat, had it that a 62-year-old man died after walking about eight km from the hospital to his house due to non-availability of any vehicles to take him home. Gangaram Yelenge was accompanied by his son, a helper in a plastic shop, from Surat’s New Civil Hospital to Mujuragate area.

Note: The report has been updated to revise the toll. An earlier version erroneously identified two more men who died since the lockdown was imposed as migrant workers.