How Many People Will Benefit From Nirmala Sitharaman's New Income Tax Rates?

If you have an annual income of over Rs 10 lakh and deductions of more than Rs 2 lakh, you’re probably going to want to stay in the old tax regime. 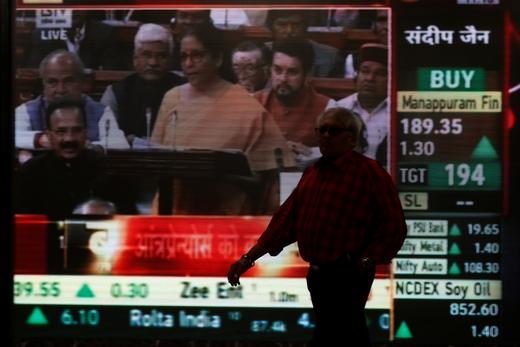 A man walks past a screen as Nirmala Sitharaman delivers her Budget speech. Photo: Reuters

New Delhi: Finance Minister Nirmala Sitharaman on Saturday introduced India’s first ever dual income-tax system by announcing the introduction of a new optional scheme in which taxpayers can opt for reduced rates if they give up most deductions and exemptions.

In her speech, Sitharaman spoke how about how complying with the country’s income-tax law has become “burdensome” and “almost impossible” for most people, without taking the help of a professional chartered accountant.

Unfortunately, the new system hasn’t made things a lot easier.

It actually introduces three more slabs and will force (mostly young) taxpayers to think through a complex trade-off of saving for the future versus having a little more cash to spend in the present.

The finance minister says all Indian taxpayers will be allowed to choose between the old regime or the new one. From her remarks though, it seems that over the next decade, the plan is to migrate everyone as the government seems intent on removing the numerous exemptions and deductions that have been added to India’s income tax code over the last three decades.

What are the new tax slabs?

Sitharaman’s new system comes with six different slabs, starting from Rs 2.5 lakh and going up to Rs 15 lakh. The table below gives you a quick snapshot of the slabs under both the systems.

Even a brief look at the table will tell you that the rates announced by Sitharaman are a big improvement, which is what sparked the initial excitement.  The catch, of course, is that the new system bans most of the major deductions and exemptions allowed under Chapter VI A of the Income Tax code and even a few other popular ones.

The ones that most people use to reduce their income tax burden are deductions under Section 80 C, which has a limit of up to Rs 1.5 lakh for investments made towards ELSS, PPF, LIC etc.

Also read: Sitharaman Misses the Chance to Exploit the Full Potential of a Higher Fiscal Deficit

Other important ones include interest paid on housing or education loans, health insurance premiums (Section 80 D), home rent allowance (HRA) deductions and donations made to charitable institutions or political parties (Section 80G). The new system also doesn’t allow the ‘standard deduction’ of Rs 50,000 that allows all taxpayers to reduce their tax outgo.

Since none of these are allowed, it seems intuitive that if you have more than one deduction – or if your deductions add up to more than Rs 2 lakh – it’s  less likely that you will want to shift to the new tax regime. This isn’t set in stone of course, and a lot of it depends not only on your annual income, but also your age and family situation.

Let’s take a few hypothetical examples below – with differing annual incomes and a range of deductions – and see how they fare under both systems.

Source: Author’s calculation. *Figure includes Cess of 4% that is applicable.

As you can see, having more deductions or exemptions usually results in a better deal under the old system. People like Abishek, Manoj and Tejas would prefer not to take up Sitharaman’s proposal. They are taxpayers who would typically have investments under Section 80C or are paying off a housing or education loan.

People like Rakesh, who earn Rs 50,000 a month, could potentially benefit from the new scheme. It’s not inconceivable that a person in this income-category would have no deductions to make, leaving him worse off under the old system.

Also read: Budget 2020: Trickle Down Economics Will Fail Like Always

However, the moment you add a standard deduction of Rs 50,000, which is available to all taxpayers as of last year’s Interim Budget last year, and a home rent allowance (HRA) of Rs 85,000 per annum, the old system automatically becomes much better for Rakesh. (This hypothetical scenario doesn’t even consider the rebate of Rs 12,500 you get if your taxable income is Rs 5 lakh, which would further tip the scales against the new system).

The other interesting example is that of Lakshmi, who earns Rs 10 lakh and has deductions of only Rs 1,50,000. The new system, which ignores deductions, is a better option for her. The question to be asked here though is how many people who earn Rs 10 lakh per annum currently have deductions/exemptions of only Rs 1.5 lakh? Is it a significant number of taxpayers?

In Lakshmi’s case as well, as the table below shows, if she increases her deductions to Rs 2 lakh, the older system once again looks like the better option.

How many could shift?

It’s clear that that Sitharaman’s tax regime is more suited for people who either have very few deductions on one hand, or own their own homes and have lower Section 80 C deductions because they have a different investment strategy on the other.

Another interesting question to be considered is whether the new system changes the way people view their tax-saving investments. Put simply, what if people decide its a better idea to simply stop the investments that they were hitherto making solely to lower their income tax burden and move to the new regime? For example, what if Lakshmi (in Table 1) decides to stop the Rs 1.5 lakh in deductions that she was getting by investing in, say, a tax-saving mutual fund. She could then decide to spend some of the extra money she would get by moving to the new regime and put the rest of it in a regular (non-tax-saving) fixed deposit. It will be fascinating to see how this affects taxpayer behaviour at a national level, provided the government chooses to reveal this data.

We know that India collects roughly Rs 3 lakh crore from individual tax-payers and that the average salary income in AY’19 stood at Rs 6.9 lakh. We also know that the finance ministry believes its move will result in a loss of Rs 40,000 crore in revenue to the government. But none of this tells us how many people will actually benefit from the new income tax system.

At the moment though, most taxpayers who have spent years carefully planning how to best  reduce their income tax burden are unlikely to jump ship to Sitharaman’s dream of a deduction-free future.