Budget 2020: How did Nirmala Sitharman Manage to Rein in Fiscal Deficit at Only 3.8%?

The budget for 2020-21 is bullish on the government’s non-tax revenues. 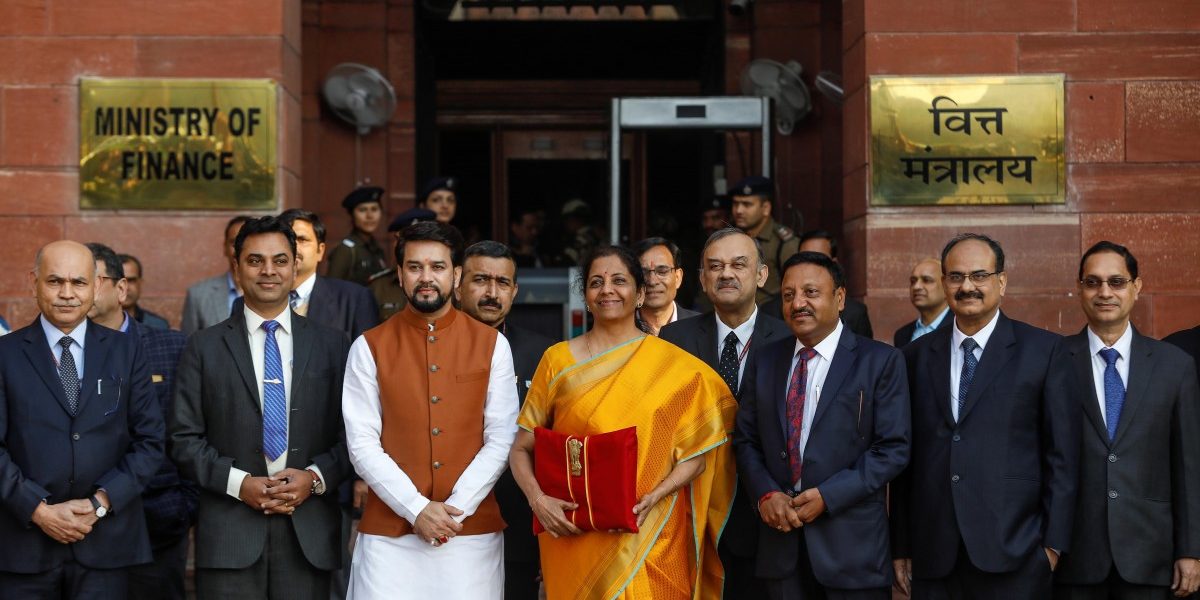 Finance minister Nirmala Sitharaman holds budget papers during a photo opportunity as she leaves her office to present the federal budget in the parliament in New Delhi, India, February 1, 2020. With her is India's Chief Economic Advisor Krishnamurthy Subramanian (2nd L). Photo: Reuters/Anushree Fadnavis

Riding on an ambitious plan for disinvestment, a sharp jump in non-tax revenues and a tight control on outlays for subsidies as well as defence, finance minister Nirmala Sitharaman on Saturday promised to bring the Union government’s fiscal consolidation programme back on track.

Presenting the Union Budget for 2020-21, Sitharaman conceded a slippage in the current year’s fiscal deficit to 3.8% of gross domestic product (GDP). Last July, she had promised a fiscal deficit of 3.3%.

However, these are only the headline fiscal deficit numbers and do not reveal the full impact of the extra-Budget borrowings of the government. In 2019-20, total extra-Budget borrowings (including those mobilised through the issue of bonds fully serviced by the government and the financial support extended through loans from the National Small Savings Fund) were estimated at Rs 1.73 trillion. For 2020-21, these borrowings are expected to rise by eight per cent to Rs 1.86 trillion.

Nevertheless, it must be accepted that the reduced fiscal deficit for next year has been achieved after conceding a larger devolution to the states (presumably because of the recommendations of the Fifteenth Finance Commission), a direct tax give-away of Rs 40,000 crore to individuals as a result of a new simplified personal income-tax regime, under which taxpayers could opt out of some of the exemptions and pay tax at a lower rate, and an estimated forgone revenue of Rs 25,000 crore as a result of the decision to tax dividend in the hands of recipients at their respective applicable rates, instead of taxing the entities that pay dividend.

How does she propose to achieve this near-miracle?

But, first, how did she manage to contain the fiscal deficit at 3.8 per cent, with a slippage of only 0.5 percentage point over the promised 3.3%? In 2019-20, she had to concede a net tax revenue shortfall of Rs 1.45 trillion and another shortfall of Rs 40,000 crore in disinvestment receipts, raising the total shortfall to Rs 1.85 trillion over what she had projected in the Budget Estimate. The finance minister reduced the government’s expenditure (about a fourth of which came from the reduced outgo on the Prime Minister’s Kisan Samman Nidhi programme) by Rs 88,000 crore. The transfer of surplus capital from the Reserve Bank also helped. The government’s dividend receipts went up by Rs 36,000 crore. That reduced the shortfall to about Rs 61,000 crore, which is less than the slippage of 0.5% of GDP.

A bigger Budget deficit containment miracle is planned for 2020-21. On disinvestment, the government has promised to raise Rs 120,000 crore in 2020-21, compared to only Rs 65,000 crore in 2019-20. This is in itself an ambitious task, coming as it does after the government’s failure to meet its 2019-20 target of Rs 1,05,000 crore. The shortfall is most likely due to its failure to complete the privatisation of some of the big companies in the state sector.

Even more ambitious is the government’s plan to raise an additional Rs 90,000 crore from disinvestment of government equity in public-sector banks and financial institutions. Sitharaman said the disinvestment plan next year would include the sale of a part of the government’s holding in Life Insurance Corporation (LIC) by way of an initial public offering (IPO). The total disinvestment proceeds in 2020-21 are budgeted at Rs 2.1 trillion, up 323% over Rs 65,000 crore in 2019-20.

Non-tax revenues to the rescue

The Budget for 2020-21 is also bullish on the government’s non-tax revenues. It has budgeted for a rise of 11 per cent to Rs 3.85 trillion. This reflects the reality of a reduced receipt from dividends and profits from central public-sector undertakings and the Reserve Bank of India (RBI). Having received the extra money from the RBI in 2019-20, it cannot rely on an even higher transfer from the central bank. Indeed, dividends and profits show a 22 per cent decline to Rs 1.55 trillion in 2020-21.

But what has come to the government’s rescue is the receipt of other non-tax revenues, which are to go up by 64 per cent to Rs 2.15 trillion. And this is largely due to a sharp increase in the government’s revenues from communication services to Rs 1.33 trillion in 2020-21, up from Rs 59,000 crore in 2019-20. This bonanza comes from the recent Supreme Court verdict mandating telecom companies to transfer pending dues on account of adjusted gross revenues to the Centre.

On expenditure, the Budget for 2020-21 proposes a virtual freeze on its expenditure under this head for food, fertilisers and petroleum products at Rs 2.28 trillion. In the current year, subsidies under these heads have accounted Rs 2.27 trillion. The Budget does not make clear how a squeeze on subsidies would be achieved (the subsidy on fertilisers will actually decline), unless a plan for rationalisation of subsidies will also be implemented in the coming year.

Even for the much-vaunted Prime Minister Kisan Samman Nidhi (PM-KISAN) programme, which had envisaged the annual transfer of Rs 6,000 to each farmer family in the country, has received an outlay of Rs 75,000 crore for next year, compared to Rs 54,370 crore in 2019-20. This is a recognition that many states have not implemented the scheme and less than three-fourths of the allocated sum for the current year could be disbursed.

But the higher allocation for capital expenditure has not helped the government much in increasing its total investments including those through internal and extra-budgetary resources of the central public-sector undertakings, including the Indian Railways. These will go up by only 2.4% to Rs 10.84 trillion in 2020-21. This is a sharp drop from the 16% increase to Rs 10.6 trillion seen in 2019-20. The meagre increase under this head will raise legitimate questions on the government’s grand plans to implement the National Infrastructure Pipeline projects, worth over Rs 100 trillion, in the next four years.

The finance minister’s expenditure leeway must have been constrained by the recommendations of the Fifteenth Finance Commission, which the government has received for 2020-21. As a consequence, the central taxes shared with the states will go up by over 19 per cent to Rs 7.84 trillion in 2020-21. This is a big increase. In 2019-20, the states’ share in central taxes, in accordance with the earlier devolution formula, had declined by 14 per cent to Rs 6.56 trillion from Rs 7.61 trillion in 2018-19. The 19 per cent increase in the tax devolution to states for next year will be much higher than the 8 per cent rise in the Centre’s net tax revenues.

In short, the Union government’s total revenues for 2020-21 are slated to go up by Rs 3.15 trillion (net tax revenues by Rs 1.31 trillion, disinvestment by Rs 1.45 trillion and non-tax revenues by Rs 0.39 trillion) to a total of Rs 22.46 trillion. Against this increase, the government has budgeted a net increase of Rs 3.44 trillion in its total expenditure to Rs 30.42 trillion or about 13 per cent. The gap of Rs 7.96 trillion is being met by borrowing, which is the fiscal deficit amounting to 3.5 per cent of GDP.

Thumbs up to protectionism

Sitharaman’s second Budget will have come as a disappointment to those who expected the government to desist from becoming more protectionist by raising customs tariff. She has raised customs duty on as many as 22 items by varying margins ranging from 2.5 to 70 percentage points. The sharpest increases are on items such as walnuts (from 30 per cent to 100 per cent), toys (from 20 per cent to 60 per cent) and household goods, appliances, electrical appliances (from 10 to 20 per cent). Such increases in customs tariff have been taking place regularly in the past few Budgets and this year has been no exception, even though such moves work against making the domestic industry more competitive and efficient as well as improving the prospects of making the Make in India programme a success. Ironically, some of the increases in Customs have been effected in the name of promoting the Make in India programme.

To be sure, the customs duty on five items has been reduced. These include newsprint, on which customs duty had been raised in the previous Budget.