Many feel the move is pointless as lowering the disclosure limit requires an amendment to the Representation of Peoples Act, which remains unchanged. 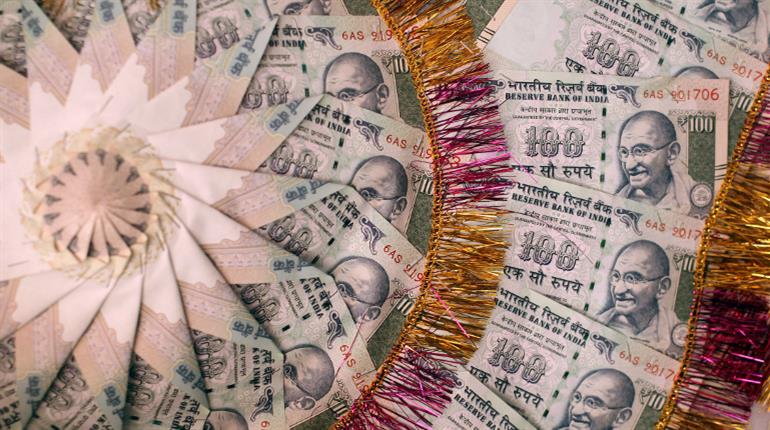 A garland made of cash. Credit: Reuters

Several RTI activists have dismissed finance minister Arun Jaitley’s announcement that cash donations to political parties will now be capped at Rs 2000, down from the earlier limit of Rs 20,000. They have questioned the intent behind the decision – it is meant to increase transparency and accountability in political donations – saying the decision actually leaves open a wide window for manipulations and non-disclosures.

Why not make Aadhaar mandatory for donations?

The most simple of questions was raised by RTI activist and former information commissioner Shailesh Gandhi, who demanded to know what stopped Jaitley from making Aadhaar mandatory for all donations. “This is just a façade that they have done something. The simple solution would have been to say that all donors should give Aadhaar card numbers and there is hardly anybody without it now. And any computer software would have been able to figure out if a number was used repeatedly.”

Noting that he has suggested this solution several times, Gandhi said “there attempts to be an attempt to show that we are doing something, everyone will say what great announcement – but instead of showing 10 donors now the parties would show 100 donors of small amounts in order to avoid fair disclosure”.

Gandhi said the Central Information Commission had held that all the national political parties were public authorities and had directed them to subject themselves to the RTI Act but the parties have neither appealed against the order in court nor have they complied with the directions. “They have just acted arbitrarily and cocked a snook at the CIC. We will not obey, what will you do, appears to be their stand.”

He added that now is a good time for political parties to take the lead and make Aadhaar mandatory for all donations themselves. “It just might set an example and make others also act.” Gandhi said it would also be useful if the civil society organisations that had batted for Aadhaar could now come forward to demand its use for political donations.

RTI activist Venkatesh Nayak of the Commonwealth Human Rights Initiative said that the decision may come off as a welcome move on principle, but it actually “completely absolves political parties from taking any action voluntarily to account for any donations that they receive.”

“Here the responsibility of transparency is being placed on the donors and on the banks or Reserve Bank of India. Political parties themselves ought to have accounted for every penny that they receive but their plea is that they do not have the staff or the resources and they could not maintain the records in such a meticulous fashion,” he said.

So, Nayak argued that what seems to be a move aimed at bringing greater transparency to political donations has actually created a scenario in which the responsibility for ensuring transparency does not lie with the recipient “and that is the most worrisome feature”.

Extraneous issues brought up via the Budget

Nayak also questioned the government’s use of the Budget to bringing up extraneous issues. “A budget is essentially a monetary bill and this is the second time under the NDA government that extraneous issues, which strictly speaking do not fall in the definition of monetary bill, are being brought in in complete violation of the constitutional principles,” he said.

Elaborating on the issue, Nayak said: “Last year it was about exempting the political parties from the purview of the Foreign Contribution Regulation Act for the purpose of receiving donations from the Indian subsidiaries of multi-national companies up to a certain cap, which was connected with FEMA, etc. So that was not exactly an issue to be brought through a money bill. And this time the issue of political donations has been raised in the Budget”.

On how and why the move was wrong, Nayak said: “This tendency is extremely disturbing because there is a constitutional provision that a money bill can contain only such matters that are laid down in the constitution about the regulation of tax, fees, et cetera. But the moment you say money bill, the Rajya Sabha has no role; they can only recommend. This is an issue that is extremely political and every political party should have a say on it in both houses. Now it can only remain at the discussion level and no further action can be taken. Again the attempt appears to be stall any action from the opposition parties in Rajya Sabha on this issue.”

The RTI activist said the issue of donations to political parties should ideally have been brought up through an amendment to the Representation of Peoples Act. “Even though they say there is a cap on receiving cash over Rs 2000, the reporting limit under the Representation of Peoples Act remains the same at Rs 20,000. So anything less than that amount does not have to be reported. So in effect, it does not make any impact,” he cautioned.

Noting that the proposal does not reflect any attempt on the political parties’ part to clean up their acts, he said: “The onus of transparency has not been placed on political parties at all and this shows the same tendency that has continued over several decades in political parties towards electoral reforms or cleaning up the electoral system. Everything is either mediated through the Supreme Court or in some way through public pressure, which in most cases too has to find a voice through an apex judgment or directive.”