At WTO Meet, Moratorium On E-Transmission Continues Without any Major Hurdles from India

The final language of the agreement suggests that India may be on board with a deal that is worse than the existing one, according to several people familiar with the development. 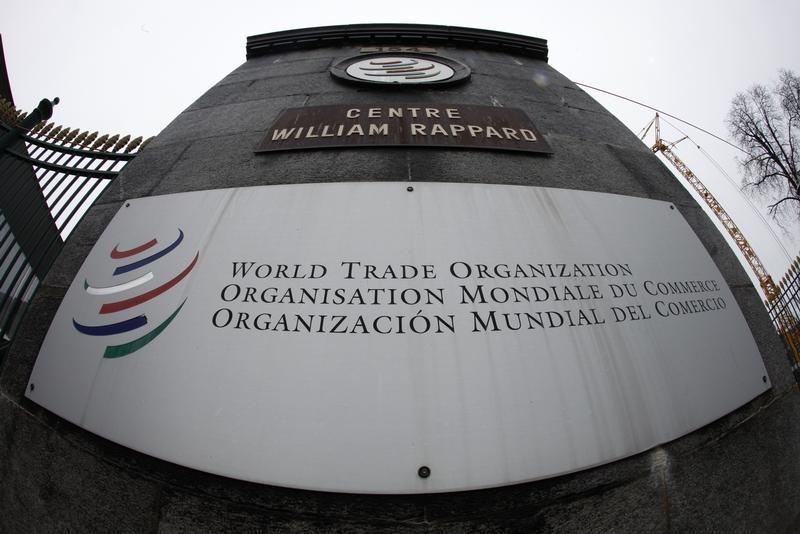 File photo of the World Trade Organization logo seen at the entrance of the headquarters in Geneva April 9, 2013. Photo: Reuters/Ruben Sprich

Geneva: India appears to have agreed to extend a moratorium for not imposing customs duties on electronic transmissions at the World Trade Organisation’s 12th ministerial conference, in a move that marks a disappointing end to New Delhi’s stance and one that may have been taken due to pressure exerted by the United States.

After making pronouncements that India will fight for the termination of the moratorium on electronic transmissions, which has caused loss of revenue in billions of dollars, New Delhi has agreed to the same, according to multiple people with knowledge of the matter.

In 1998, WTO members agreed to temporarily keep customs duties on ‘electronic downloads’ at zero and this has been reviewed and extended every year since then. Developing countries, including India, fear that with the advent of artificial intelligence and 3-D printing technology, products that are now delivered through offline modes could be easily transferred electronically. This will make customs duties on such products irrelevant.

The final language of the agreement suggests that India may be on board with a deal that is worse than the existing one, according several people familiar with the development.

At the WTO meet, Goyal said: “I think this moratorium that has been continuing for 24 years needs to be reviewed, relooked at. The work programme needs to be reinvigorated, and must provide regulatory space for developing countries to provide a level playing field to domestic SMEs in the digital sector while continuing to contribute to their economies.”

He is quoted having said in the Mint newspaper that the moratorium is “running the risk of skewing the system against the interests of the developing countries.”

In fact, India and South Africa also agreed to language in the text that would enable the General Council, which is the highest decision-making body between ministerial meetings, to extend it even before 2024.

The decision on moratorium as gaveled is as follows:

“We reinvigorate the work under the Work Programme on electronic commerce based on the mandate as set out in WT/L/274 and particularly in line with its development dimension.

We shall intensify discussions on the moratorium and instruct the General Council to hold periodic reviews based on the reports that may be submitted by relevant WTO bodies, including on scope, definition, and impact of the moratorium on customs duties  on electronic transmissions.

We agree to maintain the current practice of not imposing customs duties on electronic transmissions until MC 13, which should ordinarily be held by 31 December 2023. Should MC 13 be delayed beyond 31 March 2024, the moratorium will expire on the date unless Ministers or the General Council take a decision to extend.”

The decision on moratorium depends on the ultimate package for MC 12.”

MC12 has proved to be one of the toughest battles for developing countries since the inception of the WTO. While ministerial conferences in the past have been challenging, this time round even the low-hanging fruits appeared too high for developed states. The moratorium on electronic transmissions has been one of the easiest takeaways from past the ministerial conferences for almost 24 years but this time developing countries were strongly opposing any further continuation of the moratorium. However, in the end they lost the battle again and gave up their policy space under the pressure of developed countries.

Much has changed since 1998 when ‘phone calls’ were cited as an example of electronic transmissions (ET) which crossed borders and countries agreed ‘to continue their existing practice of not applying customs duties on ET.’ Digital revolution has drastically changed the ‘online’ trade and along with phone calls, WhatsApp, and emails, it is products which are leaving their physical carriers and being traded ‘online’. In future, it is expected that even traditional products which are physically traded will require associated digital services, for example, shoes will need software which will count the steps, heart beats, etc., and 3D printers will need computer-aided designer files to run the print products.

In this digital era, developing countries need to develop their own digital products and nurture their infant digital industries. The most effective policy tools in their hands for levelling the playing field for their infant digital industries is the customs duties. Not only are the customs duties effective in regulating online imports of digital products but they are also useful in discouraging conspicuous consumption of foreign luxury items from such as video games, movies and music. They can provide a steadily growing new stream of revenues for the governments. The demands on the government revenues have considerable risen during the pandemic and will keep rising in the post pandemic recovery.

A recent study estimates that developing countries could have generated $56 billion from imports of just 49 digitalised products in the period 2017-2019. Least developed countries could have generated $8 billion in this period while they needed just $4 billion to buy two doses of the cheapest available vaccine. Developed countries, on the other hand, have almost zero bound duties on these digitalised products and therefore lost minimalistic tariff revenues as compared to developing countries.

Irrespective of these potential revenue losses and associated social costs to developing countries, there was a strong push by developed countries to renew the moratorium in MC12. The case was built on the responses received from the big businesses, especially the digital platforms, who have enjoyed almost 25 years of duty-free exports while small and medium firms who export physical products have always faced and will continue to face customs duties. This reverse special and differential treatment to big digital platforms was objected by some developing countries, who maintained that they need the fiscal and policy space in the digital world.

Not only were the Big Tech firms exporting their digital products by including certain services into the category of electronic transmissions. These services included all the services which are traded online via Mode 1. UNCTAD (2019) estimated that the global imports in 2017 of digitalised products was $80 billion while including these services, the global imports increased to $705 billion, which implied expanding the trade coverage of the moratorium manifolds.