The macroeconomic situation remains grim for India, considering its overwhelming reliance – as much as 84% – on imports for meeting the country’s crude oil requirements. 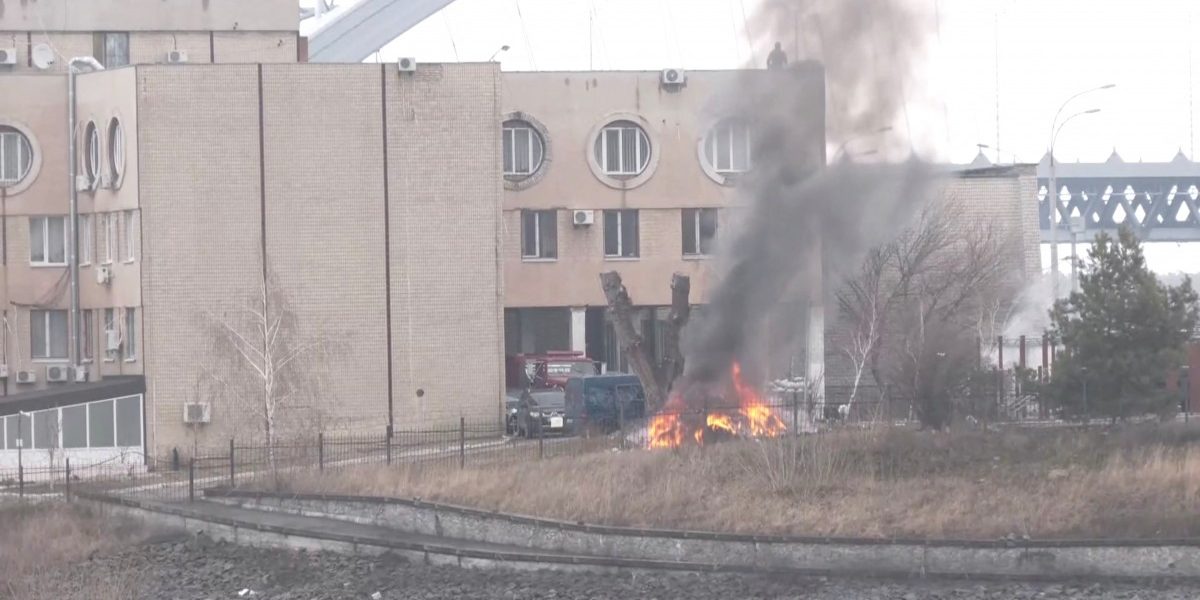 Smoke rises as a fire burns on the premises of the Ukrainian Defence Ministry's unit, in Kyiv, Ukraine February 24, 2022 in this screen grab taken from a live video. Photo: Reuters TV/via Reuters

Mumbai: Equity as well as commodity markets remained volatile on Thursday as Russia refused to back down on its military offensive against Ukraine. Russian President Vladimir Putin’s proclamation that he seeks to “demilitarise and de-Nazify Ukraine” was accompanied by the Russian air fleet striking at Ukraine’s capital as well as a dozen other strategic cities.

Brent crude oil prices were soaring and breached the $100 per barrel price barrier. This strident offensive has raised the geopolitical stakes and upset fiscal arithmetic for numerous emerging economies including India. Besides, the sudden spurt in crude oil prices translates into additional expenses on the limited earnings of the average citizen.

A rise in fuel prices ratchets food, transportation and other costs, effectively eroding the purchasing power of the common man. An increase in crude oil prices puts inflationary pressures on the macroeconomy and consequently retards broad-based consumption. It also sends foreign and domestic investors scurrying for the safety of assets traditionally considered far less risky such as gold and bonds. The capital that flows into these safe havens flows from the equity markets. As can be witnessed today, markets across the globe, be they in Asia, Europe or the US, are all in the red.

The macroeconomic situation remains grim for India, considering its overwhelming reliance – as much as 84% – on imports for meeting the country’s crude oil requirements. With Brent crude oil prices flirting with the $100 barrier, India’s oil import bill will inflate further whereas its domestic production continues to underperform. A press release by the Ministry of Petroleum and Natural Gas states that crude oil production for the month of January 2022 was 2511.66 TMT, which is 6.04% lower than the target for the month and 2.40% lower than the production in January 2021. Cumulative crude oil production during April-January 2021-22 was 24,890.07 TMT, which is 4.63% and 2.61% lower than the target for the period and production during the corresponding period of last year, respectively.

Evidently, India’s domestic production is nowhere near meeting the country’s oil appetite. The rise in crude oil prices will work to widen the current account deficit of the country, which sits at $9.6 billion, about 1.3% of the GDP.

One factor working in India’s favour is its high foreign exchange reserves.

As of the week ending on February 11, 2022, the country’s total reserves chalked up to Rs 47.52 lakh crore or $630 billion. Forex reserves are maintained by central banks around the world as a means to manage the exchange rates between currencies and lend support to monetary decisions. Forex reserves also serve as a hedge against any unanticipated disruptions during geopolitical or financial crises. A large forex reserve helps cushion the blow from external shocks and signals to other countries that an economy is strong enough to absorb an inflated imports bill. India’s foreign exchange reserves include assets from foreign currencies to gold to IMF’s quota for special drawing rights.

In a note released by CLSA on February 22, the firm points out that the geopolitical risks unveiled due to the Russia-Ukraine conflict will not impact “what is already a shallow recovery”.

“High FX reserves will stand guard against oil price spike and FPI outflows. We continue to point out that the RBI’s high FX reserves guard against 1970s/1990 type balance of payments (BoP) crises driven by oil shocks. We continue to expect the rupee to trade in a range of Rs73-76.50/USD. We estimate the RBI’s adequate FX reserves at US$600bn against the current +US$680bn (including forwards). Our assumptions of higher oil prices and FPI outflows above imply a drawdown of US$30bn. This will still leave the RBI with a large US$50bn war chest to fend off any speculative attack.”

However, in the same note, CLSA points out that it sees fiscal deficit widening considering that the populace at large will be expecting fuel price cuts. The government will be able to engineer a fuel price decrease by forgoing a part of the oil tax that currently enriches its coffers. CLSA expects the government to suffer a loss of Rs 83,000 crore worth of oil tax revenue.

“We expect the government to cut oil taxes to limit the impact of higher oil prices on pump prices/retail inflation…As it is, consumption demand remains weak. If the government wants to contain pump prices at current levels, our oil analysts estimate that it will have to cut oil taxes by Rs830bn/US$11bn/0.3% of GDP. This will widen the already high fiscal deficit and net borrowing by an additional 0.3% of GDP,” the note states.

International oil prices surged to over a seven-year high of USD 103 a barrel on Thursday after Russia attacked Ukraine, but supply lines to India remain unaffected, a top government official said exuding confidence of uninterrupted fuel supplies even if the conflict escalated.

For consumers, the spike in global oil prices will not have any direct bearing just yet as state-owned fuel retailers continue to hold petrol, diesel and LPG rates.

“Supply lines are all open. None of them has been impacted (by the Russian aggression). There are abundant supplies available in the market,” the official, who wished not to be identified, said. “Our suppliers are in the Middle East, Africa and North America, who are untouched by the conflict and they continue to supply oil and gas as normal. That situation is likely to continue even if the present conflict escalated.”

Prices, however, are of concern as they will stoke inflation.

“Retail prices are on hold but ultimately they will have to be increased at some point,” the official said.

India, the world’s third-largest oil consumer, depends on imports to meet 85 per cent of its needs. The imported oil is converted into products like petrol, diesel and LPG.

Saudi Arabia, Iraq and other Middle East nations account for 63.1 per cent of all imports. Africa is the second biggest supplier, accounting for close to 14 per cent of all supplies while North America gives 13.2 per cent.

Russia makes up for a third of Europe’s natural gas and about 10 per cent of global oil production. About a third of Russian gas supplies to Europe usually travel through pipelines crossing Ukraine.

In retaliation to the Russian attack, the United States, the European Union, Britain, Australia, Canada and Japan have announced sanctions targeting Russian banks and wealthy individuals while Germany halted a major gas pipeline project from Russia.

Energy and other trade as of now are out of the sanction ambit.

“Availability is not a concern. We are getting normal supplies and none of the suppliers has sought any deferment,” an official with Indian Oil Corp (IOC) – the nation’s largest oil firm, said.

India, the government official said, is closely monitoring the evolving situation and is in touch with the US and other nations.

While supplies at the moment seem to be of little worry for India, it is the prices that are a cause of concern.

Domestic fuel prices – which are directly linked to international oil prices – have not been revised for a record 113 days in a row.

Rates are supposed to be revised on a daily basis but state-owned fuel retailers IOC, BPCL and HPCL froze rates sooner than electioneering to elect a new government in Uttar Pradesh, Punjab and three other states started.

Retail pump rates are aligned to a price of USD 82-83 per barrel and they would certainly go up once elections end next month, industry officials said.