For India, the scandal is a PR disaster with harmful consequences for national security. 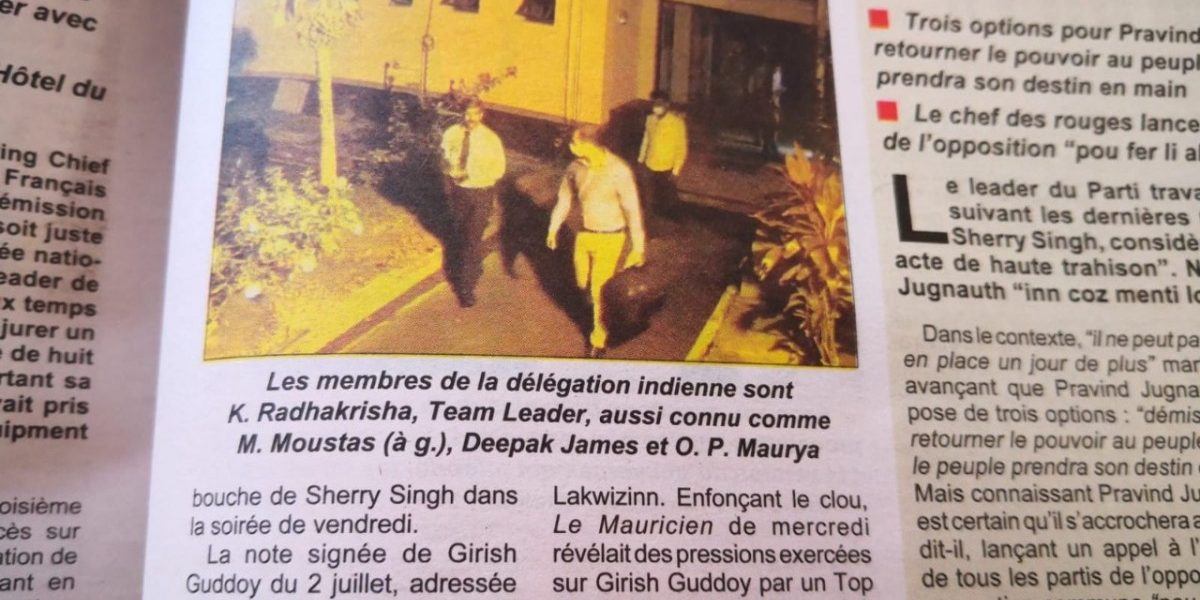 Photograph carried by L'Express in Mauritius shows a screengrab of CCTV footage of the Indian technicians at the Baie Jacotet internet landing station.

Unknown to most people in India, the Indian Ocean nation of Mauritius has been hit by a political controversy over allegations that the government of Prime Minister Pravind Jugnauth may have authorised the installation of surveillance equipment – by a team of Indian technicians – at its main Internet cable landing station.

Ironically, the ‘Indian’ dimension to the scandal emerged only after an embattled Jugnauth outed the nationality of the ‘technicians’ – until then, it was only known that they were from another country – and revealed that Prime Minister Narendra Modi was in on the decision to let them “survey” the landing station at Baie Jacotet on the southern cost of Mauritius.

Let us recap what is known so far. On June 30, 2022, Sunny Singh, CEO of Mauritius Telecom, resigned from job he had held for seven years. “I am unable to continue without compromising my values and that is not an option for me,” he wrote in a letter to employees of the company which provides telephone and internet services. Since then, the chief technology officer of MT has also resigned, noting cryptically that he too was “making a choice to stand by my values and do the right thing.”

In a radio interview, Singh has revealed the reason he quit: Jugnauth had asked him to allow a “third party” to instal equipment to monitor internet traffic at the landing station.

The issue was raised by the opposition in parliament on July 5. Jugnauth denied issuing any order to instal equipment “to enable sniffing, interception, monitoring or recording of internet traffic to and from Mauritius.” But with the controversy not ending there, he made another statement the next day, little realising the can of worms he was thereby opening:

“There was a security issue, and it was necessary to do this survey in Mauritius. I have personally approached Shri Narendra Modi to send a competent team for this survey. In Mauritius, we don’t have the technicians for this survey, but even if we did, we preferred to go for this Indian team of technicians,”

As if bringing Modi in as a player in the ‘survey’ was not bad enough for New Delhi, Jugnauth added further fuel to this fire by saying that Sherry Singh’s lack of cooperation had embarrassed him vis-a-vis India. “What was I supposed to tell Shri Narendra as I was leaving the next day for India”, he said.

Taken together, many in Mauritius reached the obvious conclusion that the request for the internet landing station “survey” most likely emanated from Modi in the first place. Why else would Jugnauth say Singh had placed him in a difficult position?

The opposition has now demanded an independent probe, but Jugnauth – who asked the police to open an investigation into Sherry Singh – says the constabulary must be allowed to complete its job. With public outcry growing, however, the political storm is not going to blow over any time soon.

For India, the scandal is a PR disaster with harmful consequences for national security.

India has very close security ties with Port Louis. India is helping to develop military infrastructure – officially described as assistance for air and sea connectivity – at the Agalega Islands about a thousand kilometres north of Mauritius proper. One measure of the closeness of ties is the fact that Mauritius’s National Security Advisers, including the incumbent, K. Ilango, have traditionally been retired intelligence and military officers deputed by New Delhi to the sensitive post. Thanks to the internet sniffing scandal, this arrangement has now been flagged as a concern in the National Assembly, prompting Jugnauth to accuse the opposition of ‘India-bashing’.

To be perfectly clear, it has not yet been firmly established (1) that an attempt was made to place surveillance equipment at Baie Jacotet and (2) that India is behind this move.

If indeed the sniffing initiative is India’s – whether to monitor China or the illicit financial flows of Indian companies which use Mauritius to round-trip or launder money – the incident points to the dangers of security over-reach. Over two-thirds of Mauritius’s population trace their ancestry to India and favour close ties with it. But most would readily draw the line at compromising their privacy or jeopardising relations with other countries. After all, the SAFE cable at the landing station runs from Malaysia to South Africa.

This also means the Modi government has learned nothing from the huge controversy its use of Pegasus spyware triggered last year. This would also raise questions about the use of ‘sniffing’ and other surveillance tools over the internet traffic of people in India.

It is also possible that the surveillance idea is Jugnauth’s. Judging by the bitter domestic political controversy which has broken out, there are certainly many in Mauritius who are prepared to believe their prime minister capable of using such surveillance. But then should India have so readily agreed to assist him in such an enterprise?