Gautam Mukhopadhaya, India's former ambassador to Myanmar, says he believes or hopes the government is waiting to see how the situation in Myanmar develops. 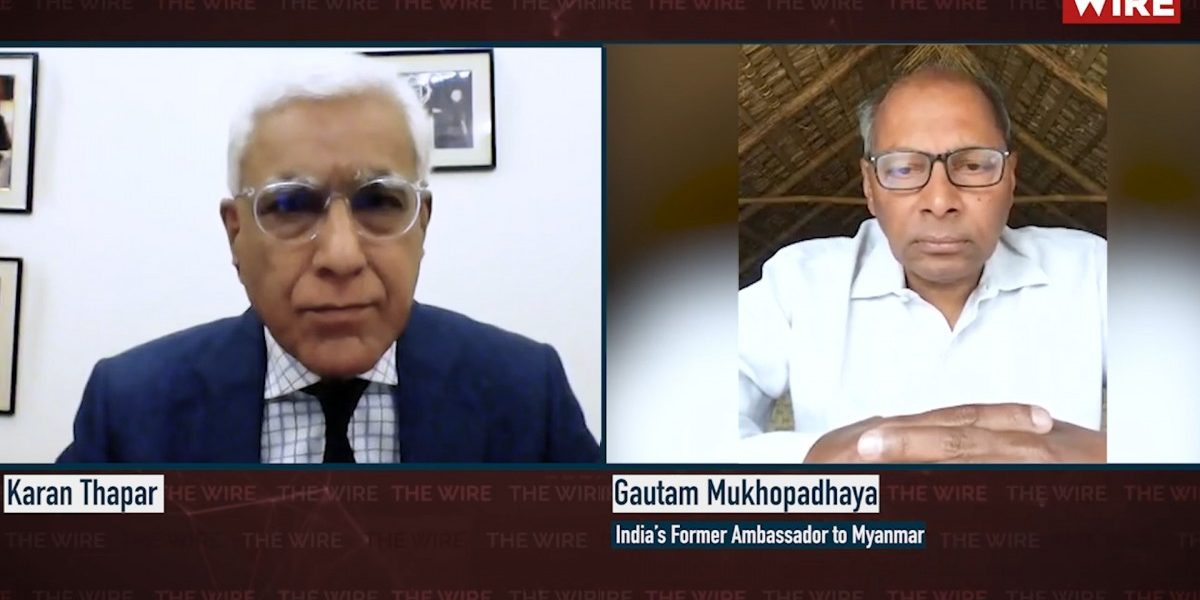 “The only charitable explanation for the Indian government’s ambivalent stand” over the military coup in Myanmar and the subsequent widespread civil disobedience as well as the increasing violence by the country’s military “is that the government is groping and unsure which way things are going to turn in Myanmar”.

This is the conclusion of one of India’s most experienced former ambassadors in Myanmar, Gautam Mukhopadhaya. He adds that just because the government in New Delhi has not so far formulated a more outspoken critique of the military coup and condemned the violence does not mean it will not do so in future. Mukhopadhaya says he believes or hopes the government is waiting to see how the situation in Myanmar develops before it takes a more clear and forthright position.

In a 30-minute interview to Karan Thapar for The Wire, Mukhopadhaya described the present situation in Myanmar as “a revolution”. He said “the civil disobedience will not end”. Asked specifically if the Myanmar people can force their army to reverse the coup and restore democracy or whether the army will inevitably win, even if that happens at the cost of brutal repression and an unconscionable number of deaths, Mukhopadhaya said: “I don’t believe the army will win”. He later added its “impossible for the army to win”.

Mukhopadhaya explained that the Myanmar army has in the past repeatedly miscalculated. He cited 1990, when it held elections and Aung San Suu Kyi won her first electoral triumph. He also cited 2015, when Aung San Suu Kyi won more than three-fourths of the seats and her party came to power with herself as State Counsellor. However, Mukhopadhaya said the biggest miscalculation by the Myanmar army is the fact people have tasted democracy over the last five years and are not willing to accept a return to military rule.

Speaking about New Delhi’s response to the February coup and the violence we have seen in recent weeks when, by some counts, a total of over 450 people have been killed by the army, including 114 on Saturday alone, Mukhopadhaya told The Wire “it’s true there has been a reticence in New Delhi to speak”. He said this was because of “ambivalence or confusion”.

Mukhopadhaya told The Wire that India’s presence at Saturday’s Army Day parade in Naypyitaw “was avoidable”.

Making a wider point about the attitude of mainland India to Myanmar, compared to that of the north eastern states, Mukhopadhaya said there’s “a lack of empathy” in New Delhi. He said the people of mainland India have lost the civilisational thread that bound India and Myanmar for millennia. On the other hand, in the north east the people of Myanmar are viewed as kith and kin.

The Central government’s order not to give them support and sustenance and to deport refugees has not been well received in the north east. Mukhopadhaya was, in fact, speaking to The Wire from Manipur.

Asked whether he agreed with the explanation that criticising the Myanmarese army and supporting democracy would annoy Myanmar generals and risk the support and help they give tackling India’s separatists and insurgents in the north east, Mukhopadhyay said the proposition that the Myanmar army has always helped India is “questionable”. He said they have “played hot and cold” in the past.

Mukhopadhaya also did not agree with the explanation that criticising the coup and the army would give China a free run in Myanmar. India’s ambivalence is sometimes explained as a way of ensuring this doesn’t happen. Mukhopadhaya said China is quite capable of adjusting and changing its position to suit its interests and if that is better served by criticising the army and supporting the movement for democracy China won’t hesitate to do so.