The US administration has been steadily raising the level of concern over Kashmir’s internal situation and the need for a 'normalised political environment' in the state.

New Delhi: As a sign of rising impatience in Capitol Hill, a US senate panel has included language in its report to a key annual legislation which allocates federal funds for furthering American foreign policy aims that specifically refers to a “humanitarian crisis” in Jammu and Kashmir and calls on India to take mitigating steps.

On September 26, Republican senator Lindsey Graham submitted the “Department Of State, Foreign Operations, And Related Programs Appropriations Bill, 2020” to the Senate. This was submitted along with the report of the senate appropriations sub-committee on state and foreign operations.

The Hindu first reported that the report included language which, for the first time, referred to the continuing security restrictions in Kashmir. The restrictions were put in place ahead of the scrapping of Article 370 in the Indian parliament on August 5.

The text, as seen by The Wire, is included in ‘title seven’ of the report. Under the section for India, the committee first recommends $120 million as assistance in 2020, and urged “enhanced engagement”, especially in Indo-Pacific region.

In a sub-section titled “Humanitarian Crisis in Kashmir”, the report proposes that India should take three steps to mitigate the situation in the state. 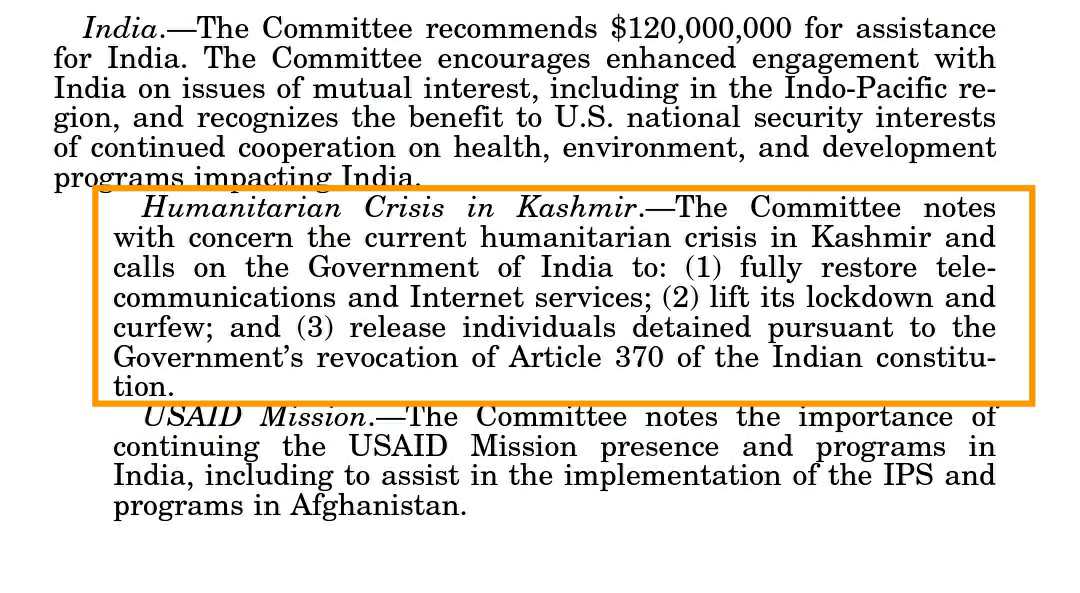 The proposal for inserting the text was made by Democrat senator from Maryland, Chris Van Hollen, and was unanimously supported by other members.

Van Hollen, in fact, visited India recently and had met with members of the Indian government.

Van Hollen told the Hindu that he had been hoping to meet with the Indian Prime Minister Narendra Modi to share his concerns about Kashmir, but the interaction could not materialise. He had also wished to travel to Kashmir, but that request was denied. The Indian government has, so far, not allowed any foreign visitors, including foreign journalists, to visit Kashmir in the last two months.

The inclusion of the text does not have any practical ramifications, but it has a “symbolic value”.

There is apparently a growing concern among US Congressmen and senators about continuing restrictions on mobile and internet communications in Kashmir Valley as well as the ongoing detention of politicians of the region.

It was reflected by statements from congressional panel members and individual lawmakers calling for India to protect human rights in Kashmir, which were also balanced by referring to Pakistan to exercise restraint. The initial inclination was to give space to India to improve the situation in Kashmir, but that tolerance may be running out.

The “growing concern” is demonstrated by the House sub-committee on Asia holding a hearing on Asia, which will focus on Kashmir, on October 22. The panel will hear from US state department officials, but also from human rights activists.

The house sub-committee chair, Brad Sherman had announced that the “hearing will focus on the Kashmir Valley, where many political activists have been arrested and daily life, the internet, and telephone communications have been interrupted”. He also stated that the hearing would “review the humanitarian situation in Kashmir and whether Kashmiris have adequate supplies of food, medicine, and other essentials”.

Sherman noted in the press release that he had heard “stories of difficulties” from “Americans from Kashmiri Valley” and their “fears” for their loved ones.

The hearing will also focus on the National Register of Citizens issue in Assam and the condition of Muslims, he added.

Sherman also stated that there would be testimony on the situation of Tamils in Sri Lanka and human rights situation in Pakistan.

As a pre-cursor to the full hearing, there was a briefing for staff members on Thursday (October 3) in Washington. The staff members had invited three outside experts, Sadanand Dhume of American Enterprise Institute, Atlantic Council’s Irfan Nooruddin and Aparna Pande from Hudson Institute.

The Indian foreign minister, S. Jaishankar had also been in US for last two weeks, meeting with his counterparts from across the world in United States and also holding court in Washington with think-tanks to give India’s position.

Even as it considered changes to Article 370 as an “internal matter” of India, US administration has been steadily raising the level of its concern over Kashmir’s internal situation and the need for a “normalised political environment” in the state.