Top US Lawmakers Meet Dalai Lama, Say Won't Back Down on Human Rights in Tibet

Beijing on Wednesday complained about the US lawmakers' meeting with the Dalai Lama, who fled Tibet after an abortive uprising against Chinese rule in 1959. 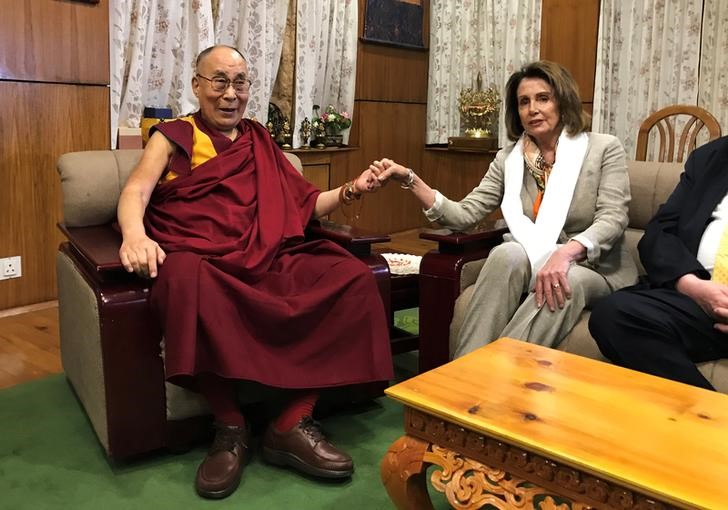 Dharamsala, India: Top US lawmakers delivered a blunt message to China on Wednesday that they would not relent in their campaign to protect human rights in Tibet, calling for legislative and trade steps to press home their point.

Nancy Pelosi, leading a bipartisan Congressional delegation to meet the Dalai Lama, vowed to stand by the exiled Tibetan spiritual leader even as President Donald Trump’s administration appears to shift its focus away from human rights.

“We’re not going away. We can do this slowly. We can do it long,” the House Democratic leader told Reuters at a guest house in the north Indian hill town of Dharamsala, where the Dalai Lama has been based in exile since 1960.

“We’ll have our leverage and we’ll be ready when we see the opportunity.”

The visit by eight US lawmakers, all but one a Democrat, seeks to buttress the moral authority of the 81-year-old Nobel peace laureate and Buddhist monk even as Beijing steps up its efforts to isolate him on the world stage.

At the same time, Tibetan emigres say an official campaign of repression and forced assimilation in their homeland is intensifying.

China took control of Tibet in 1950 in what it calls a “peaceful liberation” and has piled pressure on foreign governments to shun the Dalai Lama, whom it labels a dangerous separatist. He says he simply seeks genuine autonomy for Tibet.

Beijing on Wednesday complained about the US lawmakers’ meeting with the Dalai Lama, who fled Tibet after an abortive uprising against Chinese rule in 1959.

Pelosi said successive US administrations had paid a high price for not holding Beijing to account on human rights, instead engaging in a trade relationship that has evolved to the overwhelming benefit of China.

“We just decided to ride the tiger, and the tiger decides when you’re going to get off,” she told Reuters. “And we’re just not taking that ride with them.”

Her delegation was feted in Dharamsala on its two-day visit, which ended with festivities that coincided with the anniversary of the birth of Buddha.

‘We can set an example”

“We have a conflict with China but we respect even the hard-core communists – we look at them with compassion,” the Dalai Lama said in an address, urging his followers to remain on the path of peaceful resistance.

“We can set an example to the world that non-violent struggle can work,” he also said. “If we had fought our struggle with violence, we would not have as many friends as we do now.”

A banner showed pictures of the Dalai Lama meeting the last four US presidents. He has not yet been invited to meet Trump.

She later put out a statement condemning Trump’s “sudden and brazen” firing of Comey. “The interests of justice demand Congress act immediately to create an independent, bipartisan commission to pursue the Trump-Russia investigation free from the administration’s attempts to silence it,” she said.

Congressman Jim McGovern, travelling with Pelosi, has proposed legislation that would impose travel restrictions on China as long as Beijing strictly controls access to Tibet for foreigners.

He said the Reciprocal Access to Tibet Act was winning support in Congress – its co-sponsor is Jim Sensenbrenner, the sole Republican in the eight-member delegation led by Pelosi.

“We need to hold accountable those who are responsible for designing and implementing the policy in Tibet,” said McGovern, who has also backed a law targeting Russian officials suspected of corruption.

Those Chinese leaders guilty of severe human rights violations should be barred from travelling to the United States or parking their money there. “They ought to be on a list so that the whole world knows that they are human rights abusers,” McGovern said.

China has ramped up its criticism of the Dalai Lama in recent months – blasting India for inviting him to a gathering of Nobel peace laureates and for letting him visit a frontier region claimed by Beijing.

Pelosi responded by saying that Beijing’s harsh rhetoric was “a sign of weakness”. She backed calls by the Dalai Lama and Lobsang Sangay, the president of his government in exile, the Central Tibetan Administration, for greater autonomy that stops short of independence.

“They [the Chinese] have to recognise that there’s a value to them in letting Tibet be Tibet in an autonomous way,” she said.