Uri and After: India Must Pause Before It Leaps

From advocating sending suicide bombers across the border to taking 'a whole jaw for a tooth', Indian politicians and analysts have let fly. Pakistan would have been vanquished by now if only such political grand standing was enough. 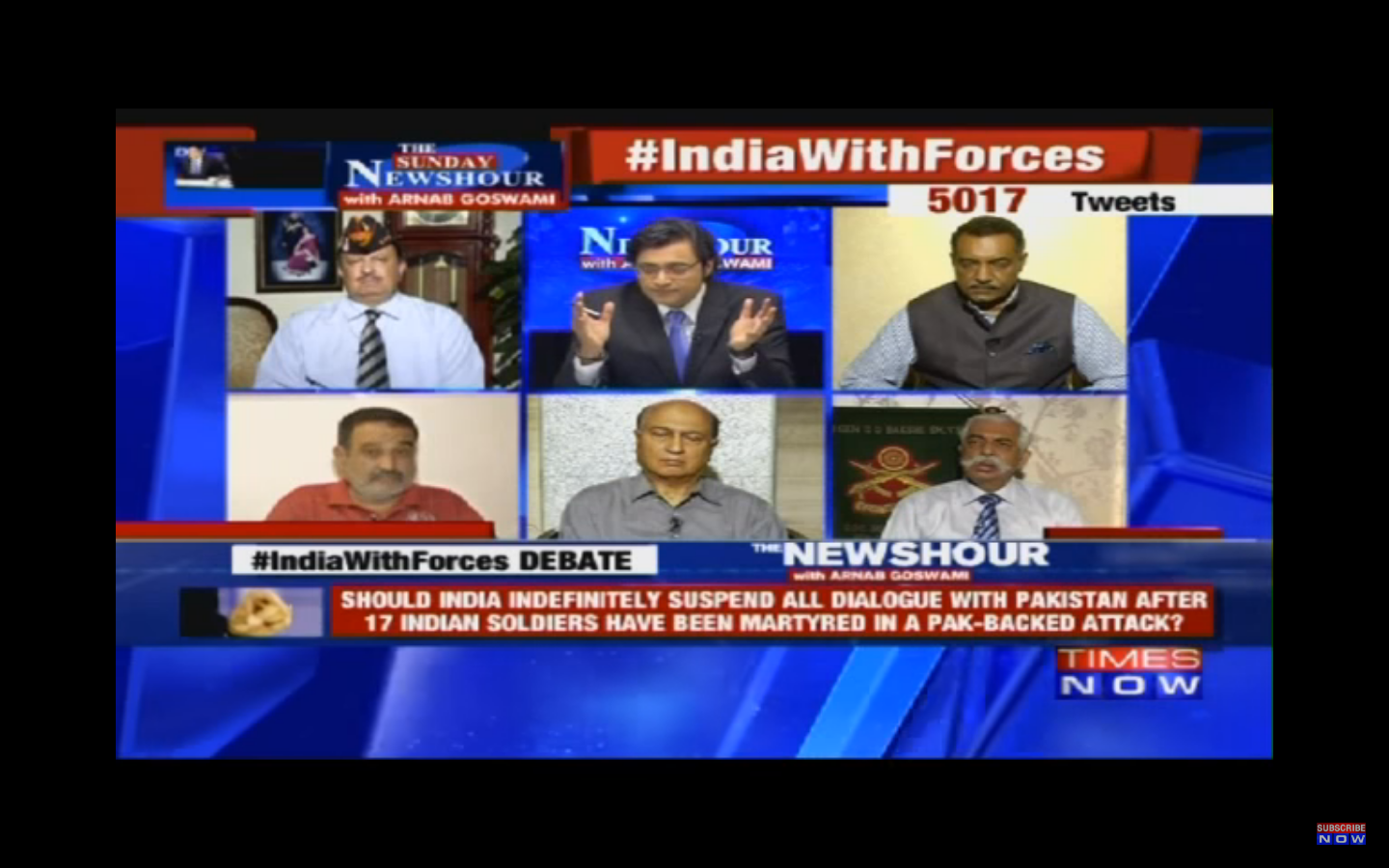 Cry havoc on TV! And let slip the dogs of war. Credit: YouTube screengrab of a recent Times No

An imminent cross border terrorist attack should have been anticipated by our counter-terrorist agencies if the September 17 statement of Vikash Chandra – inspector general of the Border Security Force, Kashmir frontier – to PTI was correct. He said that around 200 militants from across the border were trying to infiltrate. He added that some had already sneaked in.

No doubt he had made this statement – which came before the Uri attack on September 18 – to support the Modi government’s allegation that Pakistan was influencing the Valley unrest. But anybody who knows Pakistan’s activities would have realised that there was no need for it to physically send terrorists across the border merely to throw stones; if 200 men were coming, then this was for something much more sinister.

Another news report on September 19 is more disconcerting. This would indicate that the entire intelligence process had broken down in the valley. The Indian Express quoted a “senior police officer” saying that the multi-agency centre (MAC) in Srinagar which is meant to “fuse” counter-terror intelligence from different agencies has not met since protests began in the Valley, i.e. from the second week of July. It cited another “top police officer” that no reliable figures on successful infiltration attempts could be collated since “the protests have caused a breakdown in our information network”.

Let’s play with suicide too

Of course, this sobering reality makes for less compelling television than the raucous statements which have filled our airwaves and social media networks after the dastardly attack on an unprepared army camp at Uri. It is said that this is the second most serious attack on the army in Kashmir after the 2002 Kaluchak cantonment strike. A former Indian army chief, General (retd.) Shankar Roy Choudhary, told a TV channel that India should raise “our own fidayeens”, or suicide bombers. An important political leader from the ruling party has said that India must take an “entire jaw for a tooth”. Pakistan would have been vanquished by now if only such political grand standing was enough.

The former army chief should have realised that a war would ensue if India send its commandos across the border. Is the country prepared for that? He should also realise that the United States, on whom India depends for moral support, has recently been quite ambivalent on New Delhi’s aggressive posture on Pakistan-occupied Kashmir and Balochistan. A former Indian ambassador has recently drawn attention to how John Kirby, the US State Department spokesperson has “in a series of statements through the past few days …. distanced Washington across the board from the Indian positions as regards the J&K situation, Balochistan, Pakistan’s involvement in terrorism, etc”

Does our former army chief want us to emulate Pakistan by training Indian “fidayeen”?  Is he prepared to be like Pakistan which has also suffered the consequences of breeding terrorists? Pakistan was an early starter in utilising “fidayeen” for political purposes. Zulfiqar Ali Bhutto devised a twin strategy of power projection after his country’s 1971 humiliation. In that process, he also wanted to bruise India. First, was the clandestine nuclear bomb project, which he started in 1972. Second, was encouraging Islamic militants after Daud Khan seized power in Afghanistan in July 1973. Bhutto asked Brig. Naseerullah Babar, then head of the Frontier Scouts, to recruit and train Afghan fundamentalists like Gulbuddin Hekmatiyar to undermine Daud.  In the course of time, this became the catalyst for the Afghan Mujahideen, jihadi wars and the current wave of Islamic insurgency including Kashmir terrorism since 1988.

The same Naseerullah Babar was to play a key role later as interior minister in Benazir Bhutto’s cabinet by creating an “Afghan cell” in 1994 to funnel aid to the Taliban and conduct their training. The idea was to seek their muscle power to open the lifeline highway from Quetta to Central Asia, Benazir’s pet project, freeing it from the warlords who could not be controlled by the Burhanuddin Rabbani regime. And the same Taliban killed her in December 2007.

Pakistan suffered greatly by creating a beast which often mauled its government and army. A former Pakistan Police Service officer (like the Indian IPS) who spoke at an Oxford University counter-terrorism conference in 2010 where I had also given a lecture, told us how the ISI had to bend over backwards to humour the jihadis to keep the Kashmir war going. The ISI interfered in every aspect of police working. They took away arrested terror suspects for months, thereby preventing any meaningful investigation. The police wanted to de-radicalise 300 militants lodged in jail but could not, since the ISI would not permit releasing them despite the prime minister’s intervention. On the other hand, the ISI was also worried that it was losing control over the Kashmir militants. They had openly said that their policy was to keep Lashkar-e-Tayyaba leader Hafiz Saeed as relevant; otherwise they would lose control over new recruits in the Kashmir operations.

The same officer said that Pakistan’s army brought in Jaish-e-Mohammad chief Mazood Azhar and Harkat-ul- Mujahideen‘s Fazlur Rahman Khalil during the October 2009 Pakistan GHQ attack to persuade Muhammad Aqeel alias Dr.Usman, who had led that attack, to back off. It was futile. Aqeel was a deserter since 2006 from Pakistan’s Army Medical Corps. He had assassinated Gen. Mushtaq Ahmed Baig, Pakistan’s surgeon general in 2008 and was also involved in an assassination attempt against President Musharraf. He was connected with earlier incidents like the March 2008 attack on the Sri Lankan cricket team and the September 2008 Islamabad Marriot hotel bombing. It was only in December 2014 that he was finally hanged – when the entire nation was shocked by the Peshawar school massacre of 141 persons including 132 students.

India’s armchair strategists should also realise that a loyal and contented local public is the best guarantor against foreign aggression, militancy and terrorism. During the 1947-48 Kashmir operations, it was not only India’s soldiers who drove away the Pakistan-sponsored “raiders” but also an enthusiastic local population – including the organised cadre of Sheikh Abdullah. The late V.P.Menon, who had obtained Maharajah Hari Singh’s accession and who was an eye witness to the first Kashmir operation, has recounted how enthusiastically the National Conference cadres helped the Indian army. They aided them by providing manpower and transport. This happened again in 1965 during “Operation Gibraltar”, when Ayub Khan foolishly sent his raiders on Bhutto’s advice. Even Pakistani analysts have said that they did not get any support from the local people.

Could we say the same thing now? Have the present governments either in Srinagar or in New Delhi made sincere efforts to talk to all sections of the Valley’s population to hear their grievances, to end the protests and to enlist their loyalty? Was it correct to insult opposition leaders by calling them “romantic” when they made attempts to talk to the “separatists”? Was it proper to burden an already overburdened army with policing even in rural areas? These are some of the questions government leaders in Delhi should ask themselves before rattling their sabres.

Vappala Balachandran is a former special secretary, cabinet secretariat, and author of National Security and Intelligence Management: A New Paradigm (2014).