In a repeat of the Amritsar 'Heart of Asia' declaration, the BRICS statement at Xiamen names the Lashkar, Jaish, TTP and other terrorist groups. 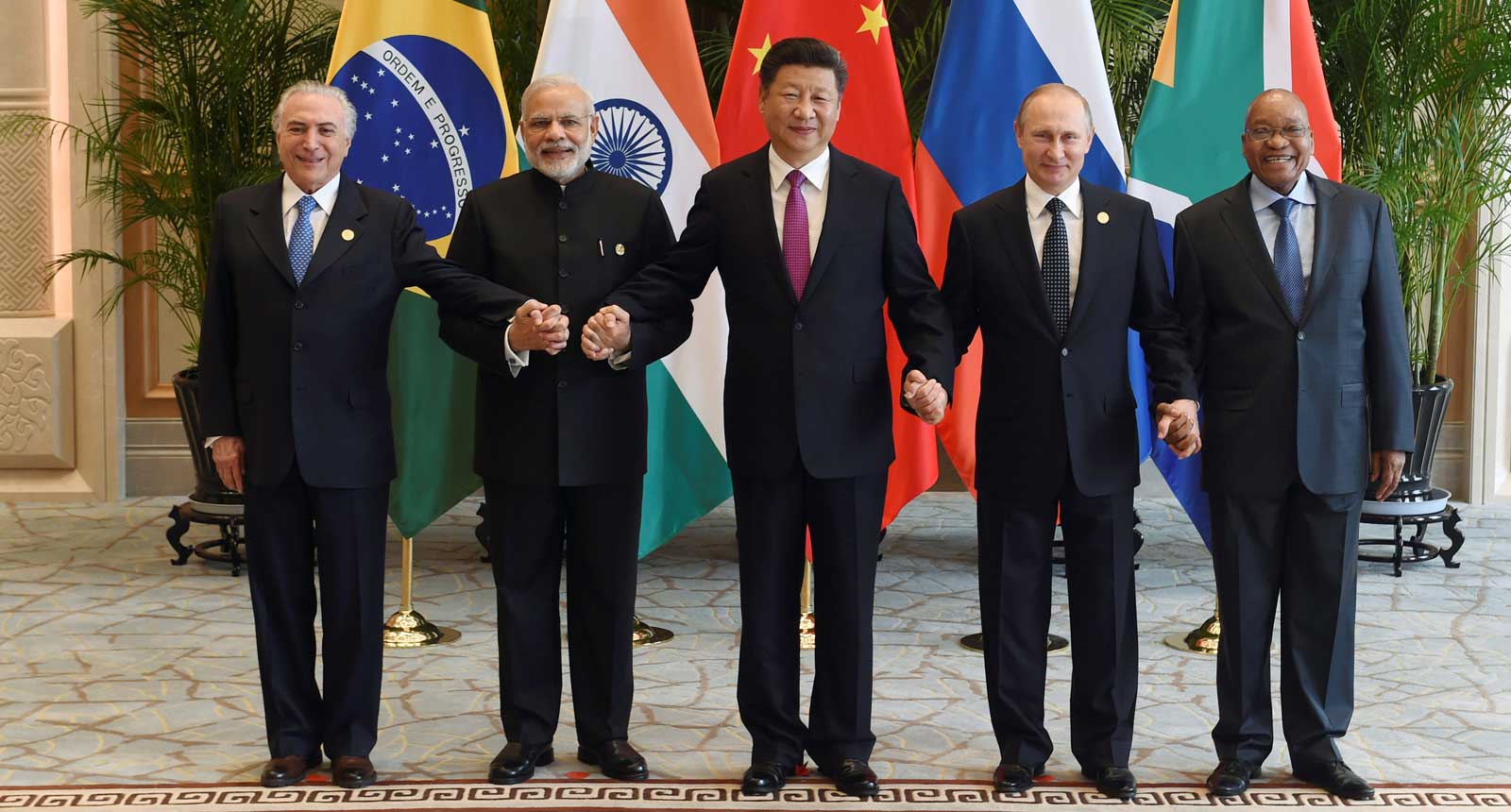 New Delhi: Even as the United States warned of a “massive military response” to North Korea’s test of a hydrogen bomb, Russia, India, China, Brazil and South Africa – speaking as BRICS – condemned Pyongyang’s action but also contradicted Washington by stressing that a solution can only be reached peacefully through “direct dialogue”.

On Sunday, the DPRK’s official Korean Central News Agency said that the country had successfully carried out the test of a hydrogen bomb which could be mounted on an intercontinental ballistic missile. This was the sixth nuclear test conducted by North Korea, but the first during the Trump administration and the most powerful till now.

Last year in Goa, the situation in the Korean peninsula was not on BRICS’s agenda. This year, however, the leaders of Russia, China, India, Brazil and South Africa, had no choice but to send out a message.

“We strongly deplore the nuclear test conducted by the DPRK. We express deep concern over the ongoing tension and prolonged nuclear issue on the Korean Peninsula, and emphasize that it should only be settled through peaceful means and direct dialogue of all the parties concerned,” said the Xiamen Declaration of the ninth BRICS summit.

The North Korean nuclear test could not have come at a worse time for China, the hermit nation’s only ally. China was looking to showcase its diplomatic muscle at the BRICS summit, but the nuclear test occurred as President Xi Jinping was delivering a major policy speech in Xiamen.

In a series of tweets, US president Donald Trump noted that the DPRK’s “words and actions continue to be very hostile and dangerous to the United States”.

He asserted that North Korea “has become a great threat and embarrassment to China, which is trying to help but with little success”.

The toughest message was delivered by US defence secretary James Mattis, after a meeting with Trump, vice president Mike Pence and other top advisors.

“Any threat to the United States or its territories, including Guam, or our allies will be met with a massive military response, a response both effective and overwhelming,” said Mattis.

He claimed that the US was “not looking to the total annihilation of a country, namely North Korea, but as I said, we have many options to do so”.

Later, Trump refused to rule out the military option. “We will see,” replied Trump in answer to a question whether he will “attack North Korea”.

Against this backdrop, the underlining of “direct dialogue” and “peaceful means” in the BRICS declaration on Monday was a clear indication of how differently the grouping of five emerging economies wants the situation handled.

The Korean peninsula was on top of the mind when Xi met with Russian President Vladimir Putin on the sidelines of the BRICS summit. As per Xinhua, both countries agreed to “stick to the goal of de-nuclearisation on the Korean Peninsula and keep close communication and coordination to deal with the new situation”.

Earlier, in their official reaction, China had expressed “resolute opposition and strong condemnation” of the North Korean nuclear test

The Russian foreign ministry also condemned the tests, but warned against any hasty steps. “In the unfolding conditions, it is imperative to remain calm and to refrain from any actions that lead to a further escalation of tension,” said the Russian  statement.

Speaking to reporters in Xiamen, Russia’s deputy foreign minister Sergey Ryabkov warned that strengthening sanctions could lead to “destruction of the economic system” in North Korea.

Ahead of the emergency meeting of the UNSC on Monday, Ryabkov saidthe  “exchange of strikes and hostile rhetoric are not leading to settlement”.

Russia specifically referred to the insertion in the BRICS declaration on criticism against unilateral military interventions and economic sanctions.

Trump had tweeted on Sunday that his administration was considering cutting trade ties with any country which continued to support the North Korean regime. While China has put in place several restrictions based on UNSC sanctions, it continues to be Pyongyang’s largest economic partner. Besides, US-China bilateral trade volume was nearly $580 billion last year.

On Sunday, India had issued a statement condemning the nuclear test, terming it as a “matter of deep concern” that North Korea had once again acted in violation of its international commitments. “India also remains concerned about the proliferation of nuclear and missile technologies which has adversely impacted India’s national security,” it said.

India has stepped up its criticism of North Korea this year, in an effort to be in sync with Trump’s major foreign policy priority. This change in rhetoric was most visible in the India-US joint statement issued when Modi visited Trump in June, compared to previous years.

Meanwhile, Indian government officials hailed the naming of Lashkar-e-Taiba and Jaish-e-Mohammad in the BRICS declaration as a diplomatic victory.

“For the first time you would notice, there has been such specific listing of such terror organisations and the fact that BRICS countries should work together in facilitating listing of these under UNSC,” said MEA secretary Preeti Saran in Xiamen.

We, in this regard, express concern on the security situation in the region and violence caused by the Taliban, ISIL/DAISH, Al-Qaida and its affiliates including Eastern Turkistan Islamic Movement, Islamic Movement of Uzbekistan, the Haqqani network, Lashkar-e-Tayyaba, Jaish-e-Mohammad, TTP and Hizb ut-Tahrir.

The inclusion of the Tehreek-e-Taliban Pakistan – which is based in Pakistan and has so far, attacked the Pakistani establishment – is certainly due to China’s insistence. After recent attacks, Pakistani government officials have claimed that the Pakistani Taliban, whose aims include enforcement of Sharia law, is sponsored by India. This has been strenuously denied by New Delhi, of course.

This is not the first time that the LeT and JeM have been named as terror groups in a multilateral document endorsed by China.

In December 2016, the Amritsar Declaration at the 6th Ministerial Conference of the Heart of Asia expressed concern over the “the gravity of the security situation in Afghanistan in particular and the region and the high level of violence caused by the Taliban, terrorist groups including ISIL/DAISH and its affiliates, the Haqqani Network, Al Qaida, Islamic Movement of Uzbekistan, East Turkistan Islamic Movement, Lashkar-e-Tayyaba, Jaish-e-Mohammad, TTP, Jamaat-ul-Ahrar, Jundullah and other foreign terrorist fighters”.

In fact, the Amritsar declaration was endorsed not just by China but also by Pakistan.

Since the Lashkar-e-Tayyaba and Jaish-e-Mohammad have been listed with the UNSC since 2005 and 2001 respectively, it is not exactly clear whether the naming of JeM in the BRICS declaration will help to change China’s mind on allowing the listing of its head, Masood Azhar.

According to PTI, Chinese foreign ministry spokesperson Geng Shuang did not answer a specific question on whether the naming of JeM marks a change in Beijing’s stance of opposing the ban against Azhar.

The BRICS declaration said that all countries reaffirmed their commitment on “increasing the effectiveness of the UN counter-terrorism framework, including in the areas of cooperation and coordination among the relevant UN entities, designation of terrorists and terrorist groups and technical assistance to Members States”.

Most of the language and paragraphs on terrorism at Xiamen were a reflection of previous declarations – from calling for effective implementation of UNSC resolutions, cooperation in the Financial Action Task Force (FATF), to the responsibility of states in preventing terrorism.

We strongly condemn the recent several attacks, against some BRICS countries, including that in India. We strongly condemn terrorism in all its forms and manifestations and stressed that there can be no justification whatsoever for any acts of terrorism, whether based upon ideological, religious, political, racial, ethnic or any other reasons.

Stressing UN’s central role in coordinating multilateral approaches against terrorism, we urge all nations to undertake effective implementation of relevant UN Security Council Resolutions, and reaffirm our commitment on increasing the effectiveness of the UN counter terrorism framework

We recall the responsibility of all States to prevent terrorist actions from their territories.

We reaffirm our commitment to the FATF International Standards on Combating Money Laundering and the Financing of Terrorism and Proliferation and call for swift, effective and universal implementation of FATF Consolidated Strategy on Combating Terrorist Financing, including effective implementation of its operational plan. We seek to intensify our cooperation in FATF and FATF-style regional bodies (FSRBs). [Goa Declaration, 2016]

The BRICS summit’s plenary session this year had a theme of “practical cooperation on common development”, therefore Prime Minister Narendra Modi’s intervention had no mention about terror, but rather presented a “futuristic blueprint”, officials said.

But, the Indian PM apparently raised the issue during the restricted session. According to Saran, he proposed a BRICS initiative on counter-terrorism and offered to host a conference on de-radicalisation.