The journey through the corridor was an emotional and immersive experience for India's 550-strong delegation, many of whom questioned Khan's attempts to politicise the event. 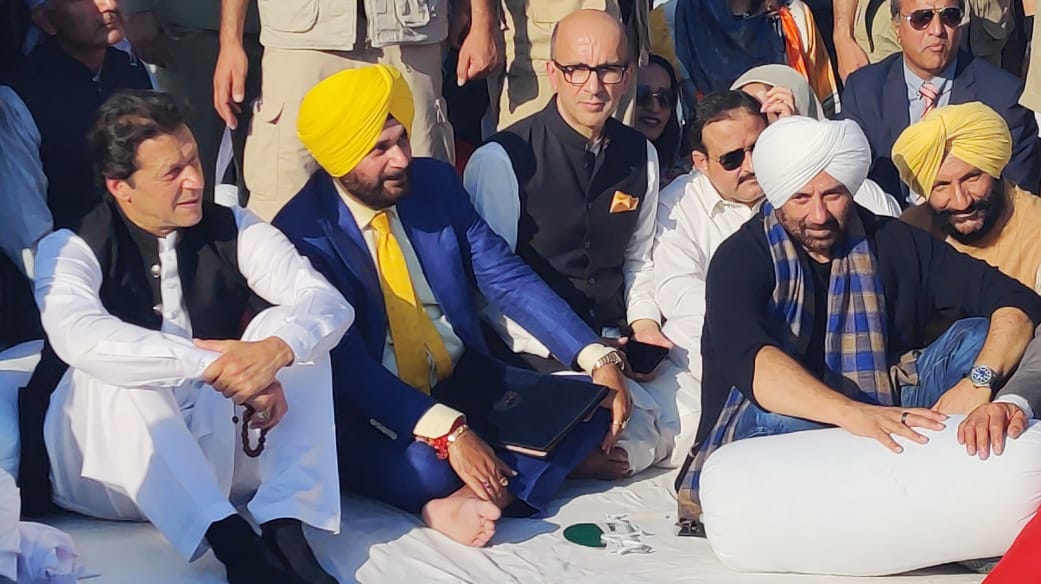 Kartarpur (Pakistan): To an audience of Sikh pilgrims from all over the world and high-profile Indian guests, Pakistan prime minister Imran Khan said on the occasion of the opening of the Kartarpur corridor that Kashmiris are still living “like animals” with restrictions on their human rights.

“Today what’s happening in Kashmir is beyond a territorial issue. This is about human rights now,” he said to several thousand people sitting under the scorching afternoon sun in the marble courtyard.

He was speaking on a dais on the south side of the massive complex facing the gleaming white façade of the Gurudwara that marks the resting place of Sikhism’s founder, Guru Nanak. Behind him was the large sculpture of a kirpan – and beyond that was the straight road going down to the border with India.

Also read: Before Kartarpur Corridor Launch, Trepidation, Righteousness and the Shadow of Kashmir 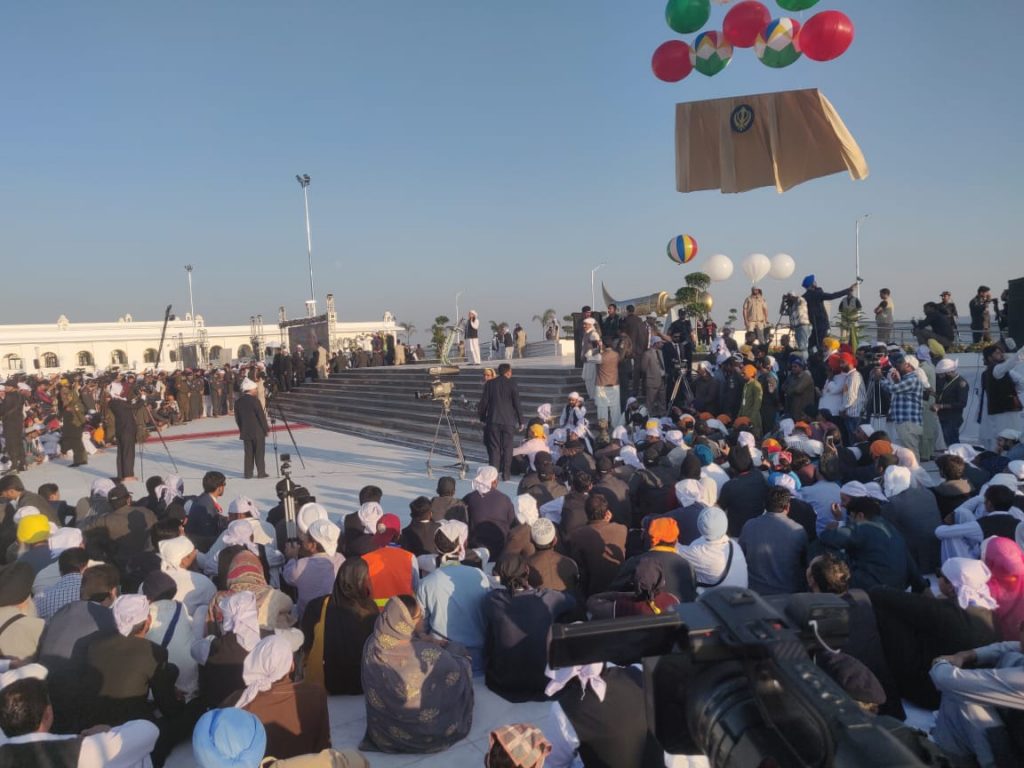 Facing the impressive expanse of the newly-completed complex, Khan first cracked a joke, saying that he didn’t realise that his own government was this efficient. “They are not this efficient in other areas,” he said to ripples of laughter. When Khan had launched the construction of the project last year, the Gurdwara was still surrounded by farmland. Eleven months later, it was at the centre of a massive complex of 400 acres.

Khan had thrown open the corridor with a ceremony marked by the unveiling of the kirpan sculpture. The audience sat on thick white cloth spread out over the marbled floor and interspersed with colourful pump pillows. Khan’s speech was being heard by pilgrims who had made the journey from around the world to tour Sikh religious sites in Pakistan on what will be the 550th birth anniversary of Guru Nanak.

His first reference to the Indian prime minister could be construed to be the time he expounded on good leadership qualities in his speech. “A leader always brings together people. He doesn’t divide them. He doesn’t spread hate and call for votes”. 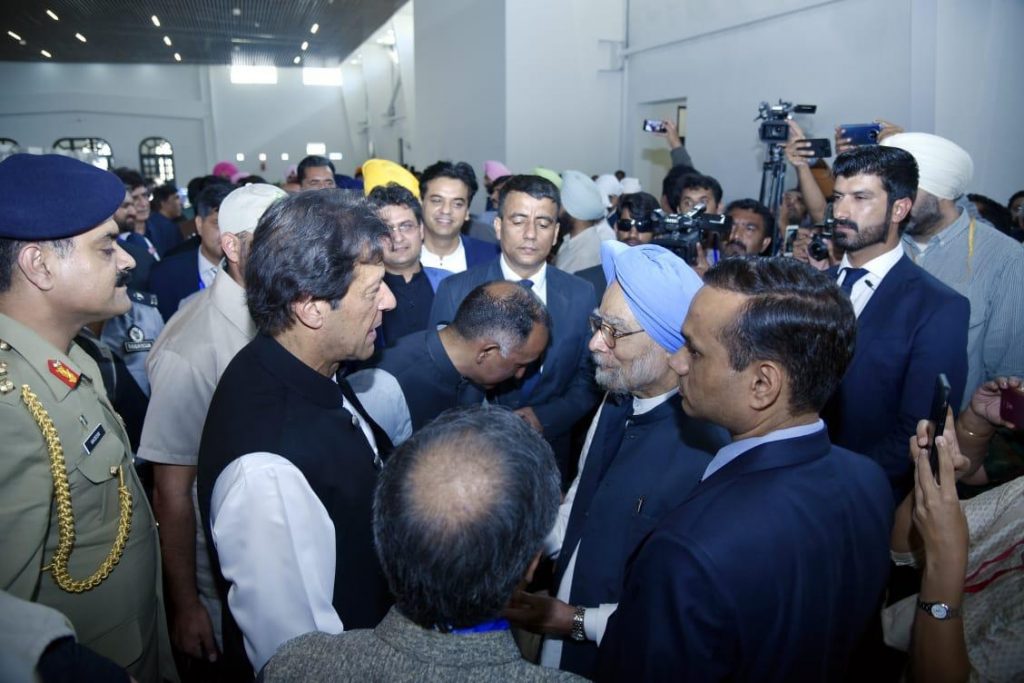 Pakistani political leaders had stated earlier that Modi may have been driven by electoral realities when he made anti-Pakistan statements during rallies before the general elections.

Khan then turned to Kashmir by pointing out that the first call he made after becoming prime minister was to Modi.

“When I became the prime minister, I first spoke to Prime Minister Modi and told him that our biggest common challenge is poverty. We can end poverty by improving relations, opening borders and improving trade. There was only the dispute of Kashmir and we could have resolved that by talks,” he said.

He also cited former prime minister Manmohan Singh as the example of a leader who had advocated for the resolution of Kashmir to normalise relations between the two South Asian neighbours.

But, the Pakistan prime minister said that the Kashmir issue was now complicated by India’s decision to change the constitutional status the erstwhile state. New Delhi has claimed that the reading down of Article 370 is an internal affair. Sweeping restrictions on internet and movement were put in place due to ‘security concerns,’ said India.

“But I have to regret that what is happening today in Kashmir has gone beyond territorial dispute. It is about human rights. The rights of 80 lakh people have been eliminated and captured by nine lakh soldiers,” he asserted. 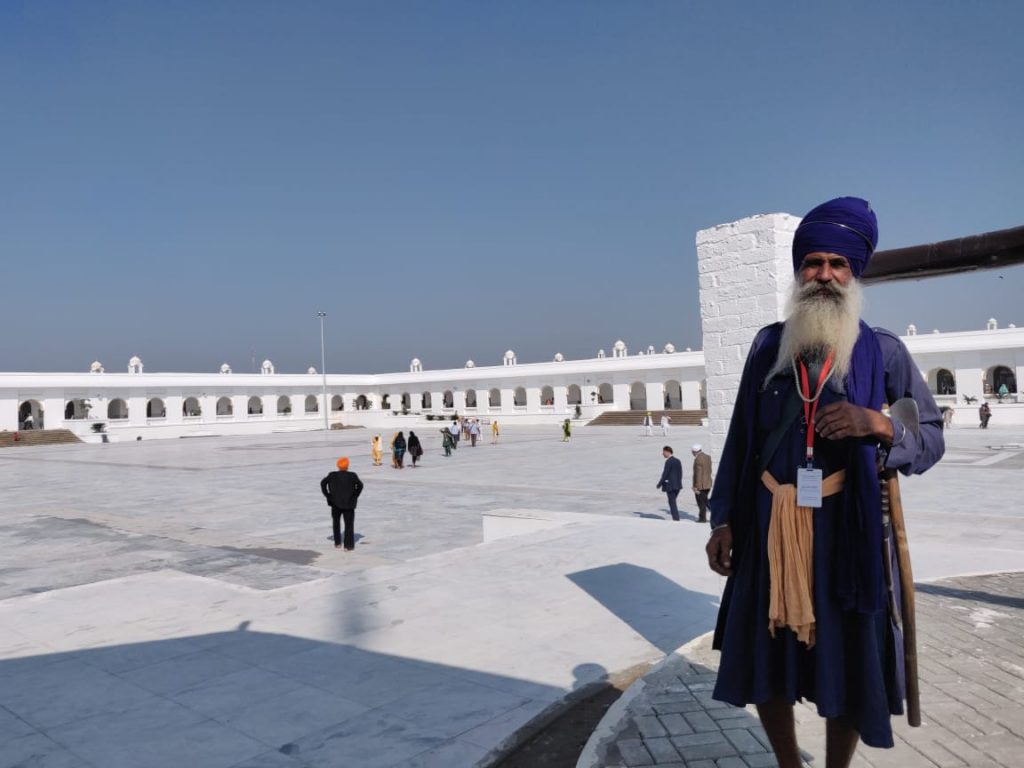 Khan went on to say that Kashmiris were being “kept as animals and their rights given by UNSC relations have been trampled upon.”

Directly addressing his Indian counterpart, he said, “If PM Modi is listening to me, he should know that justice brings peace. Give justice to Kashmiris”. He added that bringing peace would lead to dividends of open borders and accelerated economic development.

The audience was receptive to Khan’s words about the humanist teachings of Guru Nanak and the importance of Kartarpur Sahib. But, the words about Kashmir did not evoke similar emotions.

Earlier, an audience member had exhorted the pilgrims to join him in shouting slogans praising Imran Khan and Navjot Singh Sidhu. He got an enthusiastic response from the audience. But, when he called for ‘Kashmir zindabad’, the comeback petered out. 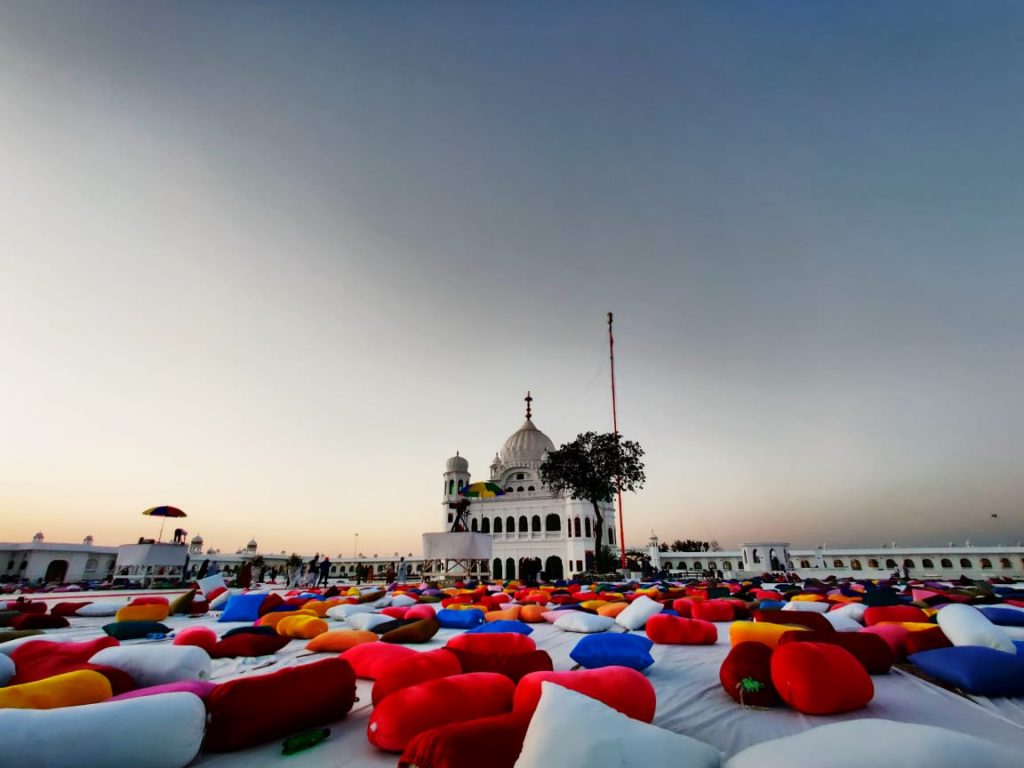 Mandeep Kaur, who had come from Maharashtra, was very appreciative of Pakistan government’s construction of the Kartarpur complex. However, she was not that happy about Khan raising the issue of Kashmir during his speech. “Politics should be left out,” she said.

Kaur’s praise for Pakistan for the Kartarpur corridor and the development of the Gurdwara was not an exception. The Wire spoke to many widely-travelled pilgrims gave credit to Imran Khan and Sidhu.

Khan had raised Kashmir also during the ground-breaking ceremony for the Kartarpur project on November 28 last year. India had immediately reacted then by accusing him of politicising a “pious” event.

So far, there has been no response from the Indian side to Khan’s remarks on Saturday. The Pakistan Prime Minister has been raising Kashmir at various platforms, including at the United Nations General Assembly in September.

Besides Khan, there were two other Indian speakers – Navjot Singh Sidhu and the Jathedar of Akal Takht, the highest temporal seat of Sikhs, Giani Harpreet Singh. 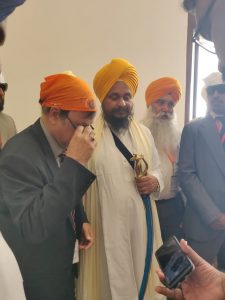 Speaking to Indian reporters, the Jathedar, who was the first Indian pilgrim to enter Pakistan through the corridor, said that he hoped the historic development will create an atmosphere of brotherhood and harmony. In his speech, he noted that Sikhs had helped all communities in Kashmir, whether Pandits or Muslims.

He refused to be drawn into responding to Indian concerns that the corridor project could fuel separatism. “I don’t think so. We are just coming here and then going back. We don’t have anything to do with it”.

Among those who took a tour in a wheelchair around the complex was former Indian Punjab chief minister Parkash Singh Badal. “This is the happiest day of my life,” said the 91-year-old politician.

His daughter-in-law, Union minister for food processing and Shiromani Akali Dal member Harsimrat Kaur Badal was highly critical about statements that the corridor could fuel separatist elements. “Those who were talking about this (fanning of separatist elements), are people who don’t believe in Guru Nanak’s teachings,” she said.

Indian government sources had been expressing concern that Pakistan army’s interest in pushing for the corridor was to develop “leverage” with the Sikh community and revive the Khalistan movement. These concerns had also been publicly expressed by  Captain Amarinder Singh, chief minister of Punjab, where SAD is the principal opposition party.

After paying his obeisance at the shrine, Union minister for civil aviation and urban development, Hardeep Singh Puri said that India “doesn’t have any problem with government of (Pakistani) Punjab and Pakistan, but [has] issues with the Pakistan army and ISI”. 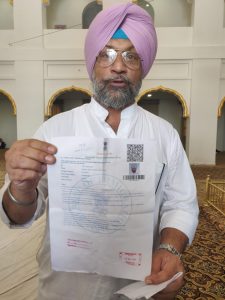 “They are trouble makers,” he added.

Earlier in the day, Modi had flagged off the batch of pilgrims from Gurdaspur.

He had thanked Imran Khan for aiding the completion of the project. “I thank Pakistan Prime Minister Imran Khan Niazi. He understood India’s feelings on the Kartarpur corridor issue, gave respect [to them] and worked keeping in view those feelings,” he said. There was, however, no reference to Modi’s public acknowledgement of his role by Khan.

The Indian pilgrims first came to zero point where Indian authorities looked at their Electronic Travel Authorisation forms. They then boarded buses provided by Pakistan to go towards the Pakistani immigration terminal. After they were verified, they again boarded buses for Gurdwara Darbar Sahib.

“It took us just five to ten minutes to go through the corridor. It was a splendid experience,” said Shiromani Akali Dal leader Jeet Mohinder Singh Sidhu, who was also among the first Indians to use the corridor. He also confirmed that Pakistan did not charge the $20 fee from them. Pakistan prime minister had earlier waived the fee for Sikh pilgrims on November 9 and 12.

While Imran Khan was giving his speech, Navjot Singh Sidhu and Sunny Deol were among the prominently seated listeners. However, the rest of the Indian leaders kept a lower profile.

On his first ever visit to Pakistan after he left his village of Gah as a young boy during Partition, former Prime Minister Manmohan Singh said, “It is a good thing for both countries that the corridor has opened after a demand of 72 years”.