With transport links cut, over 1,000 Afghan nationals are stranded in India – some homeless as their money runs out. 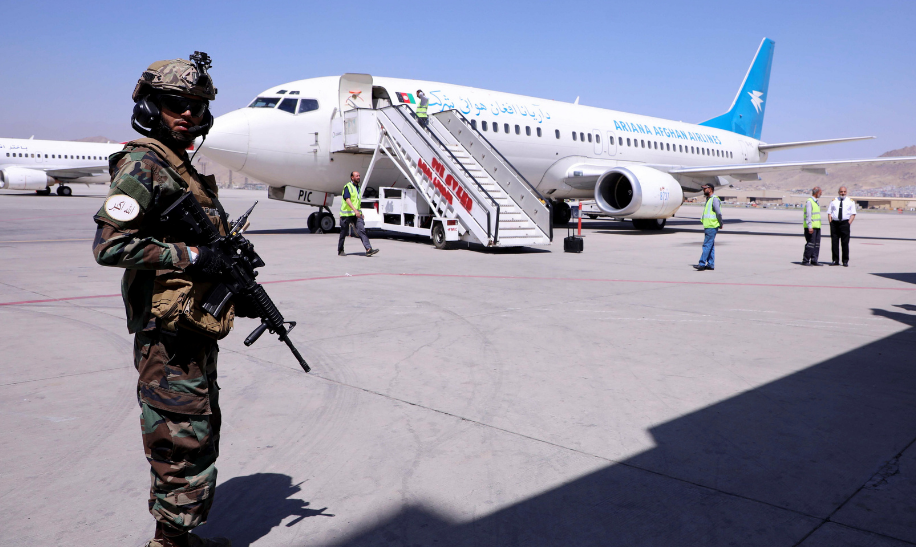 FILE PHOTO: A member of Taliban forces stands guard next to a plane that has arrived from Kandahar at Hamid Karzai International Airport in Kabul, Afghanistan September 5, 2021. Photo: Reuters/Stringer

The communication, a copy of which has been accessed by The Wire, is on the letterhead of the “Islamic Emirate of Afghanistan”. Sources confirmed that this is the first known official communication from a government entity in Kabul to their counterpart in India since the Taliban takeover in August.

India does not officially recognise the new Taliban regime, even though an initial contact was made in Qatar last month.

All commercial flights were halted on August 15, when the Taliban walked into Kabul after Afghan president Ashraf Ghani fled the country, leading to the collapse of the government. It was the culmination of a military blitzkrieg by the militia, capturing nearly all provinces in fewer than 10 days.

For two weeks, Kabul airport was the epicentre of evacuation flights, which stopped after the last US soldier left Afghan soil on August 31.

Dated September 7, the letter is signed by acting civil aviation Minister Alhaj Hameedullah Akhunzada of the new Taliban administration. Akhunzada is one of the 14 members of the cabinet who are listed under the UN Security Council’s sanctions regime. He had been the head of Ariana airlines during the first Taliban regime. 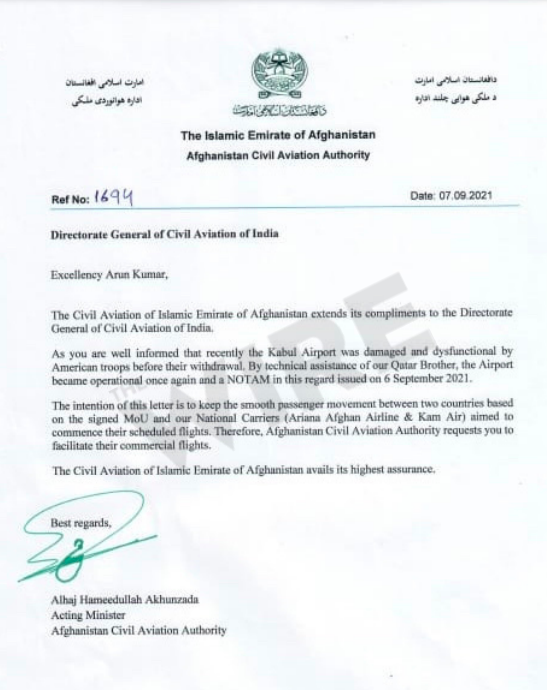 “As you are well informed that recently the Kabul Airport was damaged and dysfunctional by American troops before their withdrawal. By technical assistance of our Qatar Brother, the Airport became operational once again and a NOTAM in this regard issued on 6 September 2021,” wrote Akhunzada to the Director General of the Directorate General of Civil Aviation in India, Arun Kumar.

Akhunzada goes on to say: “The intention of this letter is to keep the smooth passenger movement between the two countries based on the signed MoU and our National Carriers (Ariana Afghan Airline & Kam Air) aimed to commence their scheduled flights. Therefore, Afghanistan Civil aviation authority requests you to facilitate their commercial flights”.

“The Civil Aviation of Islamic Emirate of Afghanistan avails its highest assurance,” it concluded.

Speaking from Kabul, Vice President (commercial), Ariana Airlines, Saleem Rahimi confirmed the letter’s authenticity to The Wire. “Yes, a letter was sent to India about restarting the flights,” he said, adding that there has been no response so far.

“Our colleagues in Delhi are working on it,” he added.

Currently, regular international flights in to and out of Afghanistan are only being operated from Iran and Pakistan. Besides, there have been special flights from UAE, Qatar, Turkey and Ukraine.

The Wire contacted the DGCA’s office for comments regarding the letter, but there has been no response so far.

Two weeks after the letter to the DGCA was dispatched, the Taliban’s foreign ministry had issued a press statement calling on all foreign governments to resume international flights from Kabul airport.

Qatar and Turkey had been negotiating with the Taliban over handling operations at the airport. However, Turkey has so far baulked at putting its technical staff at the airport, and has only wanted to station forces for security. The Taliban has, so far, not agreed to this.

Turkish president Recep Tayyip Erdogan has, meanwhile, added a new condition. In an interview with CBS News, he said that Turkey would not help operate the airport until there was an ‘inclusive government’ in Kabul.

The operation of flights, South Block officials reiterate, has no connection with recognition and establishment of formal diplomatic ties with the Taliban government. However, no decision has been taken so far on permitting Afghan airlines to restart flights to India, it is learnt.

India’s policy on allowing commercial flights by Afghan airlines is being followed obsessively by Afghan nationals who arrived in India just before the fall of Kabul for a short stay for medical treatment. With no sign of flights to Kabul, there is increasing desperation among the 1000-odd Afghan citizens, many of whom have been visiting their embassy daily for updates. 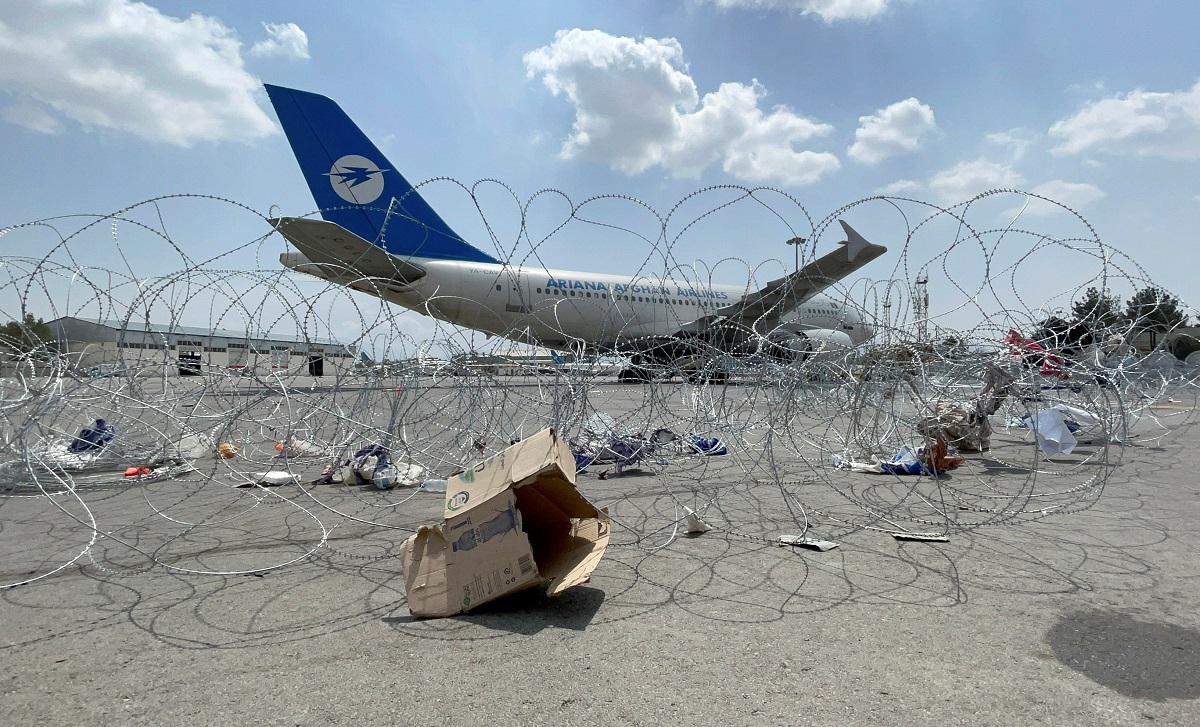 A commercial airplane is seen at the Hamid Karzai International Airport a day after US troops withdrawal in Kabul, Afghanistan August 31, 2021. Photo: Reuters/Stringer

Twenty-two-year-old Azita Osmani, a housewife from Mazar-e-Sharif, had come to Delhi in early August for treatment for herself and her parents. Her husband stayed behind in Afghanistan, but her five-year-old daughter has accompanied her.

Having planned to be in India for just 10 days, Osmani has run out of money. She now lives in a neighbourhood park in Delhi’s Lajpat Nagar with another Afghan family. “We wake up late so that we can suppress our hunger. Our dinner is donated by a nearby family,” she says.

Osmani’s nights are sleepless. “Do you think we can shut our eyes in the night in the park? Maybe I’ll get an hour or two of sleep when there is some light at 5 or 6 in the morning,” she says.

She has been going to the embassy regularly, petitioning them to push the Indian government to open flights or allow them to travel to third countries that still have transport links with Afghanistan.

Graphic designer Abdul Moez Popalzai had arrived in Delhi on August 3 for his wife’s fertility treatment. “It is finished, and I want to go back. But the Afghanistan embassy is telling us that India will not allow us to exit the country without permission,” he says.

Also read: At Afghan Aid Meet, India Says UN Should Get Full Access So it Can Assuage Donor Concerns

Several Afghan nationals The Wire spoke with also confirmed that the embassy had informed them that they would require ‘exit permission’. They were told that this would take them several more days to obtain after application.

“I don’t want anything, nothing to eat or drink or a place to stay. I just want the Indian government to give us exit permission,” said Osmani.

It seems, however, that a miscommunication may have increased the anxiety levels of those stranded, who are already under tremendous stress. The Afghan embassy and the Ministry of Home Affairs confirmed to The Wire that Afghan nationals do not need government permission to leave India.

According to a senior Indian government official, Afghan nationals with valid visas can leave India anytime that they choose. “They don’t need an exit permit. Those whose visas have expired, need to apply for a visa extension by uploading documents on the eFRRO platform. They can leave after paying a financial penalty. If FRRO finds that their document is not adequate for extension, then the matter will go to MHA,” said the official, who did not want to be named.

While valid visa-holders were relieved to learn that there is no need for an Indian exit permit, the journey back home still seems impossible. And as the days pass with no word of flights resuming, even those with valid visas find they are not able to leave before their visas expire. Kabul resident Moeebullah Gardezi went to all the embassies of Afghanistan’s neighbours in Delhi, hoping to get a visa for himself and his family – comprising his father, brother, sister-in-law and infant nephew. “I visited the embassies of Tajikistan, Uzbekistan and Iran. All of them refused to give a transit visa”.

He also went to the Pakistan high commission, where he was told to get a letter from the Afghan embassy.

Nearly every stranded Afghan national has applied for this letter, to submit to the Pakistan high commission. “The Afghan embassy is calling about 25 people each day to give them letters. But, with around 1000 people, it will take forever to get one”.

When contacted about whether Pakistan was issuing visas to Afghan nationals based in India, high commission spokesperson Jamil Baitu replied in the affirmative. “We have given more than 50 visas to Afghans during the last month. Visas are being given on a case-to-case basis,” he said.

Also watch | ‘Taliban a Tool for Pak Army to Recast Afghanistan in its Own Image’: Pak Ex-Senator

But with no direct flights from India to Pakistan, and the Wagah border crossings also restricted, most Afghan nationals plan to travel to Sharjah and then take a flight to Islamabad, where they can travel to Afghanistan by plane or road.

Baitu noted that the high commission was also “facilitating the transportation of mortal remains of Afghan nationals from India to Afghanistan through the Wagah border”. Last week, Pakistani visas were granted to Afghans accompanying four dead bodies, and four more will get the approval in a week or so, he added.

Since Afghanistan has also been financially cut off from the world after the Taliban takeover, Gardezi, a dry fruits trader, has subsisted on money sent by his brother from Europe.

Similarly, graphic designer Popalzai is also dependent on his relatives settled abroad. “But, how long can one continue like this. Even they can’t send money to us indefinitely?” he says.

They are still among the lucky ones. Most others like Osmani have now become virtually destitute. “Most of the people came here for a specific period, and now they are stuck. Some had left their children back home to come here for 10 days. There are so many who cannot pay the rent or have no money to eat,” he says.

With no signs of direct flights to Kabul restarting, Osmani has pinned her hopes on a Pakistani visa. But, she remains highly anxious about the delay as her Indian visa will expire in fewer than 20 days. “I am seriously contemplating suicide in front of the embassy,” she says, her voice rising in desperation.

“I know that my fellow Afghans will help with money for the tickets. But, when will we get to go back? How long can we live on the street?” Osmani asks.

Gardezi is also hoping that the Indian government can help to ease their situation in some way. “We always heard the relations between India and Afghanistan was not about governments, but with the Afghan people,” he said.