Sources tell The Wire that the meeting with the infamous rightwing strategist was part of India's diplomacy campaign on Kashmir in the United States. 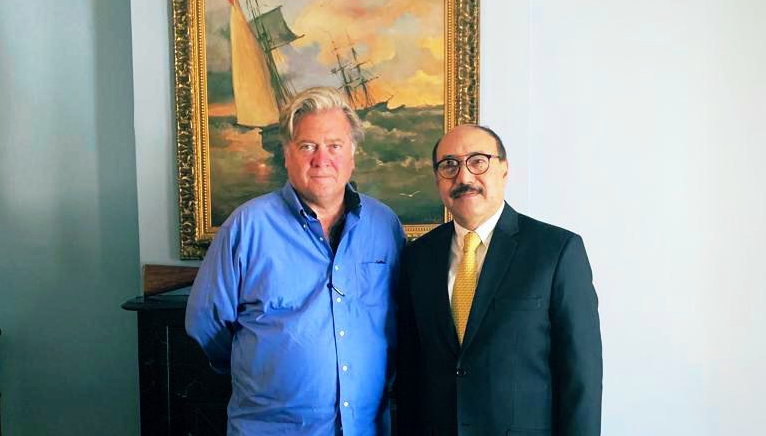 A screenshot of the image in Indian envoy Harsh Shringla's now deleted tweet, showing him and Steve Bannon.

New Delhi: One-time White House chief strategist Steve Bannon – known to be as controversial as he is polarising – made a sudden and unexpected appearance in India’s ongoing public diplomacy campaign on Kashmir in the United States before vanishing again into the ether.

Indian ambassador to the US Harsh Shringla tweeted a photo with Bannon, only to delete it several hours later without explanation. 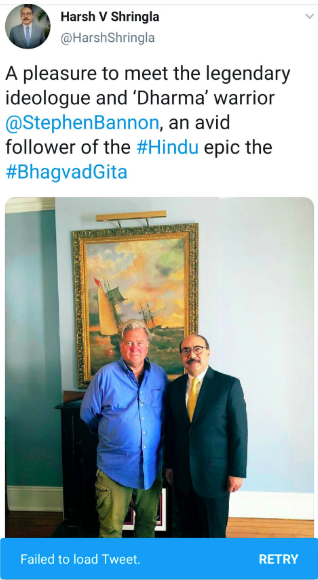 Shringla had posted the tweet late on Wednesday night, Washington time. Attached was a photograph which showed the senior Indian diplomat with Bannon. The photo was innocuous, but the caption was striking – “A pleasure to meet the legendary ideologue and ‘Dharma’ warrior @StephenBannon, an avid follower of the #Hindu epic the #BhagvadGita”.

The tweet’s language appears to have been influenced by a 2017 profile of Bannon in The Diplomat, ‘Steve Bannon, Dharma Warrior: Hindu Scriptures and the Worldview of Trump’s Chief Ideologue’.

After being up for about eight hours, the tweet was deleted early on Thursday.

The ambassador gave no public reason for the deletion of the tweet, which received a lot of attention on the social media platform. While many replies criticised the Indian envoy for meeting someone with links to white supremacist thought, there were also pats on the back from well-known right-wing influencers.

The tweet may have been deleted after it started getting the attention of Pakistani media and the larger Twittersphere. Pakistan Prime Minister Imran Khan had already through his tweets and an op-ed in the New York Times sought to compare BJP and the Rashtriya Swayamsevak Sangh to the Nazis before World War II.

“It was giving a needless handle to some elements,” said Indian official sources about the possible reasons behind the deletion of the tweet.

Kashmir in eye of storm

The sources told The Wire that the meeting between Bannon and Shringla was part of the Indian ambassador’s efforts to meet influential persons of different ideologies and affiliations who could be helpful in the coming months to counter Pakistan’s campaign over Kashmir in the US.

It is learnt that the Indian envoy has also sought a meeting with Democrat presidential ticket hopeful Bernie Sanders, who had expressed concern about the continuing communication clampdown in Kashmir.

“It’s a war in Washington and India needs all the help that we can get,” said sources.

In the US, high profile – but mainly Democratic – Congress representatives like Ilhan Omar have been critical about the situation in Kashmir. The upcoming session of US Congress is also likely to see a public hearing on Kashmir in the House of Representatives.

We should be calling for an immediate restoration of communication; respect for human rights, democratic norms, and religious freedom; and de-escalation in Kashmir.

International organizations should be allowed to fully document what is happening on the ground.

On September 3, Shringla released a 12-minute long video where he gives a detailed explanation of India’s rationale for reading down Article 370 and also the current situation in Kashmir to counter “speculation, some peddling of half truths, untruths, factually incorrect information that has emanated in the media, primarily in United States”.

A senior media executive, Bannon was one of the key brains behind US President Donald Trump’s election campaign and then joined his administration as chief strategist in the White House.

Trump, however, soon came under pressure, even from his allies, to oust Bannon, whom many within the administration considered “too extreme” in his pandering to the alt-right.

When Trump eventually let go of Bannon, he is understood to have felt that the latter was taking too much credit for the president’s rise and policy positions.

The Mercer family is also a significant financial backer of right-wing news network Breitbart News, which Bannon at one point headed and is closely associated with.

In 2018, after the Facebook-Cambridge Analytica data sharing scandal broke out, details emerged of Bannon’s involvement with the data analytics and mining company. The former Trump advisor was vice-president of Cambridge Analytica in 2014 and may have been associated with the company’s alleged role in the Brexit vote.

The controversy also had ripple-effects in India, prompting the BJP go take a harsh position against Facebook and Cambridge Analytica. Describing the potential violation of privacy as a “breach of trust”, Union law minister Ravi Shankar Prasad in July 2018 said that the CBI would investigate the Cambridge Analytica data breach. Nothing has come of those efforts since then, however.

After a political exile of sorts, a recent tweet by Trump indicated that Bannon may be essaying a comeback.

Nice to see that one of my best pupils is still a giant Trump fan. Steve joined me after I won the primaries, but I loved working with him! pic.twitter.com/jRpmdrGYTB

Bannon is still officially not back with Trump but is expected to once again play a key part in his re-election campaign.

In 2014, Bannon, who was then the head of Breitbart News Group, had described Indian PM Modi’s victory as part of the global revolt against crony capitalism. His characterisation was seen by observers as odd given Modi’s proximity to certain businessmen and corporate groups.