The former president is in New Delhi for the first time since his shock defeat in the 2015 presidential election, for which he had blamed India. 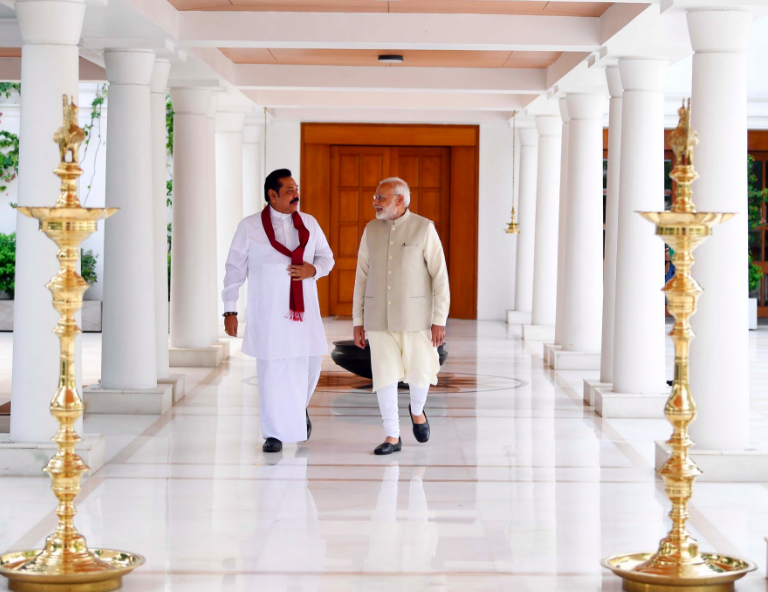 New Delhi: Former Sri Lankan President Mahinda Rajapaksa used the pulpit of his first public speech in India to claim that the civil war wasn’t aimed at the Tamil community but towards the “total eradication of terrorism”.

The former two-time Sri Lankan president is in New Delhi for the first time since his shock defeat in the 2015 presidential election to Maithripala Sirisena. He had claimed that there was an Indian hand behind his defeat due to his perceived closeness to China.

While Rajapaksa has made trips to Tirupati, this is his first visit across the Vindhyas as a former president.

He called on Prime Minister Narendra Modi on Wednesday, but no details of their meeting have been released yet. They had previously met during Modi’s visit to Colombo in 2017.

“We did not at any time wage an ethnic war. The military action was certainly not directed against the Tamil community,” he said in his speech on ‘Indo-Sri Lanka Relations: The Way Forward’ on the civil war that ended in 2009.

According to the UN, around 40,000 civilians were estimated to have been killed in the final weeks of the 26-year-old civil war between the Sri Lankan security forces and Tamil Tigers.

He claimed that the estimates of casualties in the conflict were exaggerated. “Had we not cared for the human lives, we could have finished the war much earlier. In that case, we could also have saved the precious lives of many of our soldiers,” said Rajapaksa.

Stating that there had been “propaganda and misrepsentation of facts”, Rajapaksa reiterated that the civil war was not targeted at any community. “It was aimed at total eradication of terrorism. It was for making the country better, safe and prosperous for everyone.”

He reminded that the “reach of this terrorist organisation was not confined to Sri Lanka, but extended to Indian soil where they assassinated Rajiv Gandhi and many others”.

He appreciated India’s moral and material support to Sri Lanka at that time, which he said was a demonstration of “abiding friendship”. Rajapaksa suggested that a ‘troika’ mechanism used for top officials of both countries to keep in contact during those days of conflict should be replicated again to coordinate cooperation in economic and social issues.

While Rajapaksa cannot stand for the presidency, his party, the Sri Lanka Freedom Party is seen as a front-runner in the next elections. He noted that “complete understanding” with India would be “one of the pillars of our foreign policy”.

Even as he appreciated India’s role, he also stated that the country’s peacekeeping force was always destined to be a failure. “While this (Indian support) was of vital assistance to us, I remained unshaken in my conviction that foreign armies could not successfully banish terrorism from our soil, because the broad mass of popular opinion would not support this”.

After his electoral loss, Rajapaksa had blamed Indian and Western intelligence agencies for uniting the opposition against him.

“The manipulative dimensions of foreign powers and domestic forces played a part in the change…,” he said on Wednesday. However, he added, “…much water has flown under the bridge”.