In a tweet on May 10, BJP's Rajya Sabha MP Subramanian Swamy had said the Indian Army must be sent to Sri Lanka to "restore Constitutional sanity". 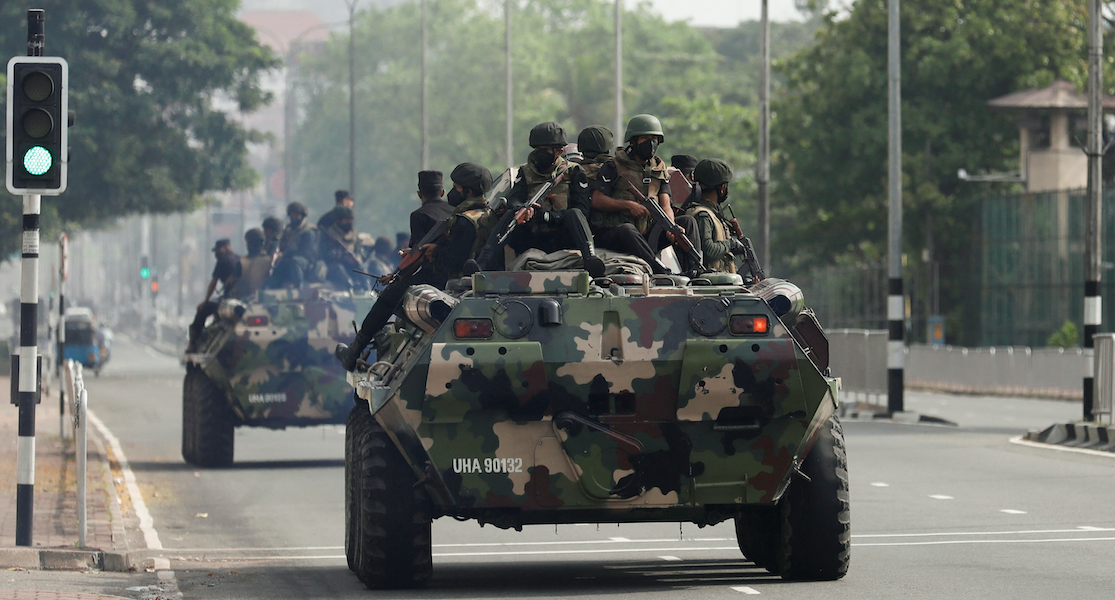 Army members travel on armoured cars on the main road after the curfew was extended for another extra day following a clash between Anti-government demonstrators and Sri Lanka's ruling party supporters, amid the country's economic crisis, in Colombo, Sri Lanka, May 11, 2022. Photo: Reuters/Dinuka Liyanawatte

New Delhi: The Indian High Commission on Wednesday, May 11, bluntly denied “speculative” reports that New Delhi would send troops to Sri Lanka, adding that “such views” – which were first articulated by a Bharatiya Janata Party MP – were not the Indian government’s position.

In the aftermath of the Mahinda Rajapaksa government announcing emergency for the second time amidst crippling economic crisis, protests against the dispensation had intensified last week in Sri Lanka. Amidst public pressure, a rousing speech by Rajapaksa is believed to have mobilised his supporters to attack peaceful anti-government protesters. As protests turned violent, public anger led to attacks on ruling party members and their property across the country. Eight people were killed.

Mahinda Rajapaksa’s eventual resignation and a curfew have failed to douse public anger.

On May 10, Sri Lankan authorities issued shoot-on-sight orders for anyone damaging public property or threatening lives.

Rejecting claims that India would send troops to the island nation, the Indian mission also said India is “fully supportive” of the island nation’s democracy, stability and economic recovery.

“The High Commission would like to categorically deny speculative reports in sections of media and social media about #India sending her troops to Sri Lanka. These reports and such views are also not in keeping with the position of the Government of #India,” the Indian mission said on Twitter.

The Spokesperson of Ministry of External Affairs of India clearly stated yesterday that #India is fully supportive of Sri Lanka's democracy, stability and economic recovery. (2/2)

External Affairs Ministry spokesperson Arindam Bagchi said in New Delhi on Tuesday: “India will always be guided by the best interests of the people of Sri Lanka expressed through democratic processes”.

On the same day, fuel to the ‘India must send troops’ fire was added by BJP’s Rajya Sabha MP Subramanian Swamy who tweeted on May 10 that the Indian Army must be sent to “restore Constitutional sanity”.

Swamy had made similar calls for Indian intervention during the Maldives crisis of 2018, invoking criticism from both the government and opposition in Maldives.

“India should invade Maldives if rigging of election takes place,” Swamy had tweeted then.

This is the third time that the Indian high commission in Sri Lanka has had to refute speculation or rumours related to India in less than a week.

A day ago, the Indian mission refuted as “fake and blatantly false” local social media speculation that former prime minister Mahinda Rajapaksa and his family members have fled to India.

The whereabouts of Mahinda Rajapaksa has been speculated upon since his resignation on Monday and following reports he had fled Temple Trees, his official residence.

High Commission has recently noticed rumours circulating in sections of media & social media that certain political persons and their families have fled to India.
These are fake and blatantly false reports,devoid of any truth or substance.High Commission strongly denies them.

On May 7, the high commission issued tweets refuting claims that India had extended a line of credit for Sri Lanka to import a “water canon vehicle”.