With Temporary ID Cards in Hand, Seven Repatriated Rohingya Refugees Back in Rakhine

According to a media report, the men have been given National Verification Cards, which isn't exactly a citizenship card but a temporary card that enables the holder to apply for citizenship under the 1982 Citizenship Act.

Seven Rohingya men before their deportation on India-Myanmar border at Moreh in the northeastern state of Manipur, on October 4. Credit: File/Reuters

New Delhi: Early this month, India had loaded seven Rohingya refugees onto a bus to be taken to the Myanmar border to be deported and repatriated, despite international hue and cry and the UN High Commissioner for Refugees office in India warning of the “risk of being prematurely returned”.

According to a report in the Indian Express, the seven are officially back at home in Rakhine state in Myanmar, after being escorted in handcuffs by immigration officials for four days.

The Indian Express used the vast Rohingya refugee network in Bangladesh to help trace the men – Mohammad Jalal, Mokbul Khan, Jalal Uddin, Mohammad Youns, Sabbir Ahamed, Rahim Uddin and Mohammad Salam. The report also claims that sources in the UNHCR have confirmed that the men have reached their respective homes in Rakhine.

“We were brought here in a car. Four of us are from Bazar Fara, and are now with our families. Three were from Foidafara, and they were taken there,” Mohammed Jamal, one of the men, told the Indian Express.

According to the report, the men have been given National Verification Cards (NVCs), which isn’t exactly a citizenship card but a temporary card that enables the holder to apply for citizenship under the 1982 Citizenship Act. 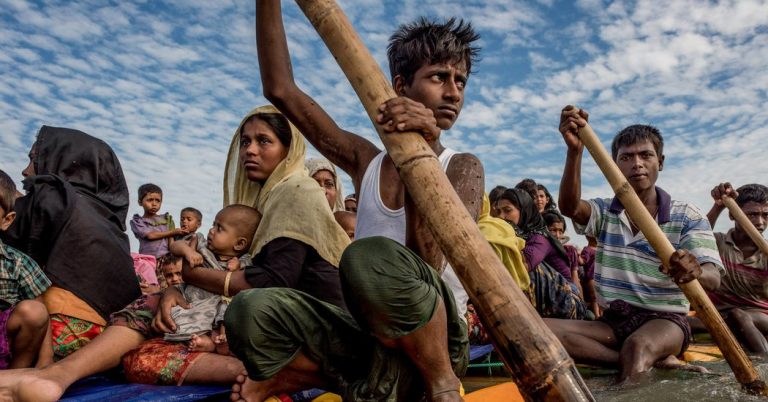 After the genocidal attack on Rohingya in Rakhine state of Myanmar on August 2017, which triggered the massive exodus of Rohingya asylum seekers to Bangladesh, this is the first instance of deportation of Rohingya back to Myanmar.

An estimated 40,000 Rohingya, a stateless Muslim minority, live in India after having fled persecution in Buddhist-majority Myanmar over the years. The seven men being sent back had been held in prison since 2012 for illegal entry into the country. At present, there are more than 200 Rohingya asylum seekers who are languishing in jails in different states of India.

According to an Al Jazeera report from October 15, hundreds of Rohingya refugees in India are fearful about what the future may hold, particularly as the Indian government has asked states to identify members of the Rohingya refugee community, record their biometric details and report them to the central administration.

Nearly one million Rohingya have fled genocidal violence and persecution in Myanmar since 2012. Over 900,000 of them live as refugees  in Bangladesh.