This offer was first made by the Ministry of External Affairs’ joint secretary in charge of the Afghanistan file, J.P. Singh, during the Moscow format consultations closed-door meeting on Wednesday. 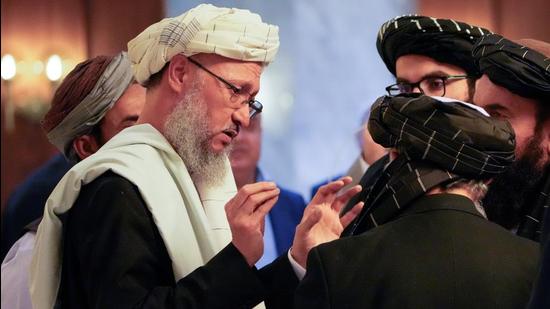 New Delhi: A delegation of senior Indian diplomats met with Taliban deputy prime minister Abdul Salam Hanafi with an offer to provide humanitarian aid and to take into concern sensitivities of both sides.

This offer was first made by the Ministry of External Affairs’ joint secretary in charge of the Afghanistan file, J.P. Singh, during the Moscow format consultations closed-door meeting on Wednesday. It was again reiterated by the Indian diplomat at a separate meeting with senior Taliban leaders.

India’s offer was first reported by the Twitter account of the Taliban’s official spokesperson, Zabihullah Mujahid, who said that India’s representative was “ready to provide humanitarian aid to Afghanistan”.

After a couple of hours, the Taliban spokesperson tweeted a short statement that the Taliban delegation met with Singh on the sidelines of the Moscow meeting.

He added that “both sides considered it necessary to take into account each other’s concerns and improve diplomatic and economic relations”, as per a rough translation of the statement. Singh also stated that India was ready to provide extensive humanitarian assistance to Afghanistan, the Taliban spokesperson noted.

The Taliban spokesperson’s acknowledgement of the Indian offer was the first time the new dispensation had mentioned India on its social media outlets. Interestingly, Mujahid tweeted summaries of statements from just three countries – India, China and Turkmenistan – that attended the closed-door meeting in Moscow.

Two weeks after the Taliban came to power on August 15, the Indian envoy in Qatar met with the deputy political chief of the Taliban Sher Mohammad Abbas Stanikzai in the first-ever public contact, but there had been no official statement from the Taliban on the meeting.

While the text of India’s statement has not been released, sources confirmed that India had offered humanitarian assistance to Afghanistan, which is facing imminent economic collapse. No specific amount was mentioned by India. On Tuesday, the Times of India reported that India was considering sending 50,000 metric tonnes of wheat.

As per sources, India was still working out the details on the delivery of aid. So far, Afghanistan’s neighbours, Iran, Pakistan, and Central Asian nations, have sent urgently required assistance on a bilateral basis.

At the UN-backed donor conference on Afghanistan in September, India’s external affairs minister S. Jaishankar had stated that only the United Nations had the “capacity to monitor such endeavours and reassure donors”.

Lack of consensus, no joint statement

At the end of the third meeting of the Moscow format consultations, the Russian foreign ministry issued an outcome document that it described as a “joint statement”. However, sources privy to the meeting, denied that there was any joint statement agreed by the participating countries. Instead, they characterised the outcome document as a chairman’s summary.

A senior Iranian diplomat posted on his personal twitter account that the Moscow format concluded without any results, despite “serious and meaningful talks”. “In my opinion, the weakness of the meeting management and the lack of efforts to reach a consensus is the reason for not issuing a joint statement,” wrote assistant to Iranian foreign minister, Seyyed Rassoul Mousavi.

After his tweet, the Russian embassy in Iran tagged him with a link to the joint statement. Mousavi responded by asserting that any joint statement can be adopted after it is “read at the final meeting or the final text of the agreement should be distributed at the meeting and the participants should be asked for their opinion”. “Such meeting was never held,” he replied to the Russian embassy’s tweet.

The document issued by the Russian foreign ministry stated that the participating countries have called for consolidating efforts by the international community to mobilise urgent humanitarian and economic assistance for Afghan people.

The ten countries have agreed to organise an international donor conference under the auspices of the United Nations “as soon as possible”, as per the statement. It also stated that the “main burden” for post-conflict development of Afghanistan should be borne by “the forces whose military contingents have been present in this country for the past 20 years”, pointing the finger at the United States and its allies.

The US skipped both the Moscow format talks and the extended troika meeting held a day earlier on Tuesday. The US state department spokesperson Ned Price claimed that it was “logistically difficult” to attend the Moscow meeting, adding that Washington will participate in future sessions.

The US has just appointed a new special envoy to Afghanistan after Zalmay Khalilzad stepped down on Monday.

Remarking on the absence of the US delegation, Russian foreign minister Sergei Lavrov hoped that the country would remain active and join further steps, including implementation of the joint statement adopted at the meeting.

Leading the Taliban delegation, second deputy prime minister Abdul Salam Hanafi called for the international community to recognise the ruling dispensation in Kabul. He also reiterated the demand for access to Afghan financial assets abroad. “The pressure option has been proven to have not worked in the past,” he said. 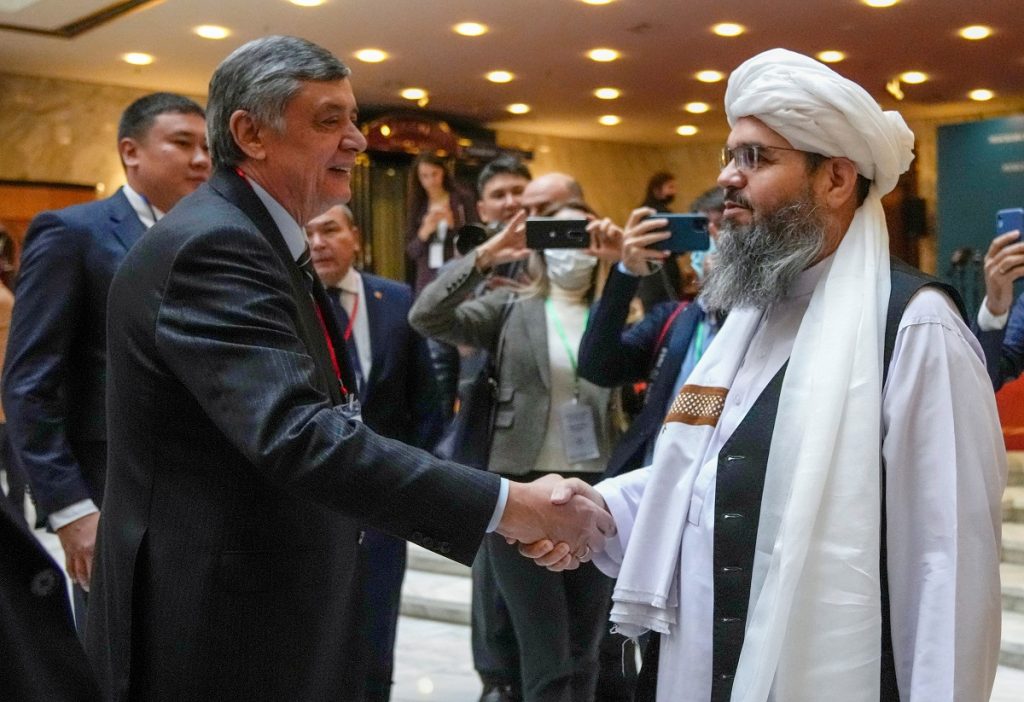 Russian presidential envoy to Afghanistan Zamir Kabulov shakes hands with a representative of the Taliban delegation Mawlawi Shahabuddin Dilawar before the beginning of international talks on Afghanistan in Moscow, Russia, October 20, 2021. Photo: Alexander Zemlianichenko/Pool via Reuters

Lavrov had listed the lack of official recognition, financial stress and humanitarian challenges as indicators that the situation in Afghanistan “cannot yet be called stable”. However, he had also added that there was no alternative to the Taliban government for the foreseeable future.

The meeting’s main document also stated that “practical cooperation” with Afghanistan should be built taking into account the reality of the Taliban in control, “regardless of the official recognition of the new Afghan government by the international community”.

The Taliban’s principal backers – Russia, China and Pakistan – have repeatedly called for greater engagement with the new Afghan regime, worried that the economic collapse could lead to chaos and provide fertile ground for terror groups to operate in Afghanistan. The Western countries also want to prevent the looming humanitarian disaster in Afghanistan in order to stop an exodus of Afghan refugees.

The Russian ministry’s document also expressed concern about the activity of banned terror groups in Afghanistan and offered to provide security assistance to the new Taliban government.

“The participating countries took note with satisfaction of the reaffirmation by the interim Government of Afghanistan of its previous commitments to prevent the use of the territory of Afghanistan against the security interests of neighbouring countries, other states in the region and the whole world,” it added.

On the demand of the international community for an inclusive government, the Taliban did not seem receptive. Hanafi stated that the current government was inclusive as over 50,000 employees of the former government were still working, as quoted by Tolo News.