Revealed: The Diplomatic Moves that Delivered Modi His Yoga Day

Prime Minister Modi's proposal took everyone at the UN by surprise. Nor had the MEA done any homework on the idea. India's point man at the time explains how the job got done. 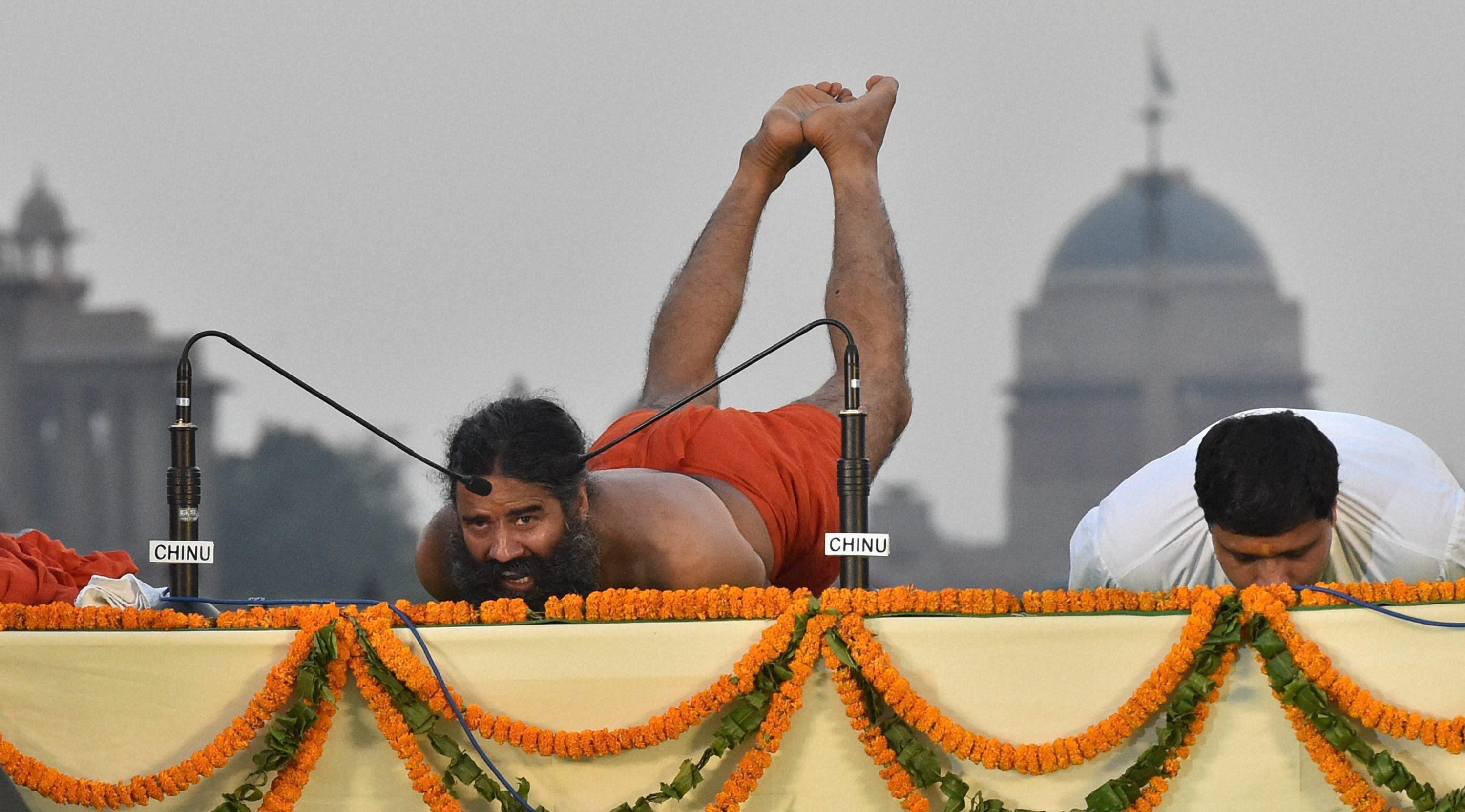 Ramdev's TV channels have become industry pioneers and still continue to be companies with the highest margins in the business. Credit: PTI

Yoga, said Narendra Modi at the United Nations General Assembly (UNGA) in September 2014, is not just exercise. “By changing our lifestyle and creating consciousness, it can also help us deal with climate change”. He then urged the nations present to support the adoption of “an International Yoga Day”.

The proposal took all of us at the UN by surprise. This was the first time Modi was going to address the UNGA, and apart from the fact that he would speak in Hindi, which was widely conjectured, we did not have any text of the speech itself until early in the morning of the day. Therefore, none of the issues which featured in the speech were known in advance to us.  I would say that there was an element of surprise for our system as well: There was no previous “file” in the Ministry of External Affairs about the proposed International Yoga Day.

Though we had to start from scratch, the prime minister had made the proposal and implementing this clear-cut objective became a priority for Indian diplomacy. The strategy to implement this objective was entrusted to the Permanent Mission of India to the United Nations.

The major procedural consideration for successfully implementing any proposal to have the UN declare an ‘international day’ was to make sure that it met the UNGA’s guidelines. In 1980, the assembly had decided that such proposals should be “of priority concern to all or the majority of countries and should contribute to the development of international cooperation in solving global problems, in particular those affecting developing countries”. In February 1999, the UNGA had decided that any proposal for declaring international anniversaries should be submitted directly to the UNGA “for consideration and action”.

To ensure that the proposal to designate an International Yoga Day contributed to addressing global problems, and keeping in view the prime minister’s emphasis on the contribution made by yoga to health and climate change, it was decided to table this proposal under the “global health and foreign policy” head of the UNGA’s already adopted agenda. Doing so would directly link this proposal to two ongoing processes in multilateral negotiations – the formulation of the Sustainable Development Goals (SDGs) to be adopted by Agenda 2030 in September 2015 in New York, and climate change negotiations scheduled to conclude at the Conference of Parties meeting of the United Nations Framework Convention on Climate Change in Paris in December 2015.

The proposal had to be implemented through a resolution which enjoyed the support of a majority of the UN’s 193 member states. This required an assessment to be made on the ground of the receptiveness of this proposal among different countries. The link between yoga and health, within the broader framework of encouraging sustainable lifestyles and sustainable consumption, became a major yardstick for such an assessment.

China in, Pakistan out

A few days before the prime minister made his proposal, China’s President Xi Jinping, accompanied by his wife Peng Liyuan, had paid his first official visit to India. Media coverage of the visit had been extensive. It included an interesting report about the Chinese first lady’s visit to Tagore International School in New Delhi, during which students from this school and the Jinyuan Senior High School in Shanghai had demonstrated the practice of yoga and tai-chi through a video-link.

Getting China, as a major developing country, to co-sponsor the proposed resolution appeared a logical and strategic proposition. Given the unusual nature of this idea, I put it before China’s ambassador to the UN for consideration as a concrete outcome of his president’s recent visit to India. He consulted his government. Within four days, China became the first co-sponsor of the proposal. The news that China had joined India as co-sponsor had a major impact on drawing in other developing countries. Over 3500 Yoga enthusiasts took part in one of the biggest yoga events in China ahead of International Yoga Day on June 21, in Wuxi on Sunday. Credit: PTI

The holistic nature of the proposal made it important to get co-sponsors from the developed world as well. In many industrialised societies, yoga is an integral part of the daily lives of millions of individuals, and the outreach campaign identified those countries where yoga was ingrained into the popular consciousness. Foremost among these was the United States. Since 2003, New York’s Times Square Alliance had been conducting public mass yoga classes in the heart of the country’s most frenetic city, which was also the headquarters of the UN. Every year, on June 21, the organisers of this event brought together tens of thousands of ordinary people to perform yoga. The early co-sponsorship of the United States, along with countries like the Russian Federation, France, the United Kingdom, Germany and Japan, gave a major boost to the proposed International Day of Yoga.

From the beginning, the diplomatic outreach to implement the proposal was made either individually with country-delegations, or in informal sessions of the UNGA which were open to all delegations. The outreach revealed other reasons why countries supported the proposed resolution.

For example, yoga tourism retreats along the Indian Ocean coastline of Mozambique  made it one of the early African co-sponsors. Countries with large Indian diasporas in Africa, Asia-Pacific and the Caribbean, as well as Latin American countries like Brazil, Mexico, Colombia and Argentina, where yoga schools had been nurtured by well-known Indian yoga gurus, became enthusiastic co-sponsors.

Pakistan was aware of the proposed resolution, but did not show any interest in it when it was raised in the first informal session of the General Assembly, when we were open for co-sponsors. They were possibly blindsided by China’s decision to co-sponsor, eventually taking the same corner as Saudi Arabia, Malaysia and Brunei. Even within the Organisation of Islamic Cooperation (OIC), however, they were isolated as all but eight of its members co-sponsored the resolution. In South Asia their isolation was complete, with even OIC members such as Afghanistan, Bangladesh and Maldives co-sponsoring.

The link between yoga and health played a major role in getting co-sponsors, eventually totalling 48, from the 56-member OIC group. These co-sponsors included Egypt, Nigeria, Senegal, Turkey, Iraq, Iran and Indonesia. As Qatar said when the resolution was tabled, “It also stresses the importance of disseminating information more widely about the benefits of yoga so that all peoples of the world can enjoy its benefits and improve their lifestyles so as to enjoy better health.”

The awareness of yoga as a common civilisational heritage brought together countries of Central Asia, South Asia (except Pakistan) and South East Asia (except Malaysia and Brunei) as co-sponsors. Sri Lanka and Nepal took special interest in their co-sponsorship of the resolution. In the UNGA, Sri Lanka congratulated India on the initiative while emphasising its shared “millenniums-old cultural, social and religious bond with India.” Nepal expressed its “most sincere appreciation to the leadership of India for their important initiative and coordination”, while pointing out that the “sacred mountains and Himalayas in Nepal have been a sanctuary for all seekers of peace and benevolence as well as great practitioners of yoga and various forms of meditation, from South and Central Asia and beyond, since ancient times. Nepal is also home to Lumbini, the birthplace of Siddhartha Gautama, the Shakyamuni Buddha, himself a great practitioner of meditation.” While the co-sponsorship list of member states grew apace, crossing the half-way mark of 97 within six weeks of the proposal being made, the open informal sessions of the UNGA raised only one issue – budgeting for celebrating the proposed International Day of Yoga. The European Union delegation was at the forefront of this discussion, although most EU states had already become co-sponsors of the proposed resolution. India’s clarification in the text of the resolution that all costs for celebrating the international day would be met from “voluntary contributions” resolved this issue, leaving the way clear for the resolution to be tabled. By this time, 129 countries had adopted the resolution as their own by becoming co-sponsors, well over the majority required for any vote.

Before it was adopted in the UNGA on December 11, 2014, 48 more countries became co-sponsors of the resolution, raising the total number of co-sponsors to 177. The resolution was tabled and adopted a mere 75 days after it had been first proposed by Prime Minister Modi. Both these statistics are now UNGA records for any international day resolution – the result of a conscious application of the methods and objectives of strategic “inclusive” diplomacy by India. As the massive global celebrations of the first International Day of Yoga on June 21, 2015 showed, this was indeed an idea whose time had come.

Interestingly enough, there was no opposition to the resolution. There were no negative votes when it was tabled.

Was it worth it?

While there are many ‘international days’ and the criticism has been made by some of whether it was worth it for India to expend diplomatic capital in this manner, the effort needs to be seen in the context of what India has been doing to give meaning to some of the principles of the UN Charter. For example, Chapter 6 – devoted to the peaceful settlement of disputes – seems to have fallen by the wayside, though this was one of the main outcomes of the San Francisco Conference when the world was recovering from the ravages of the Second World War.

India’s campaign for International Day of Nonviolence in 2006 may be seen in this context. Every year, we have pushed the celebration of this day outside the meeting rooms of the UN – I brought in a requirement that one third of the audience must be high school or university students, for example, so that the speakers (often Nobel peace laureates) who spoke of nonviolence would pass on the traditions of Gandhiji to the next generation.

Asoke Mukerji, former Permanent Representative of India to the United Nations, led the Indian diplomatic campaign for the adoption of the UNGA Resolution declaring an International Day of Yoga