Quad: US Pitches for Anti-China Collaboration; Cautious Public Silence From Other 3

US Secretary of State Mike Pompeo was unabashed in urging the Quad countries to come together on an anti-China platform. 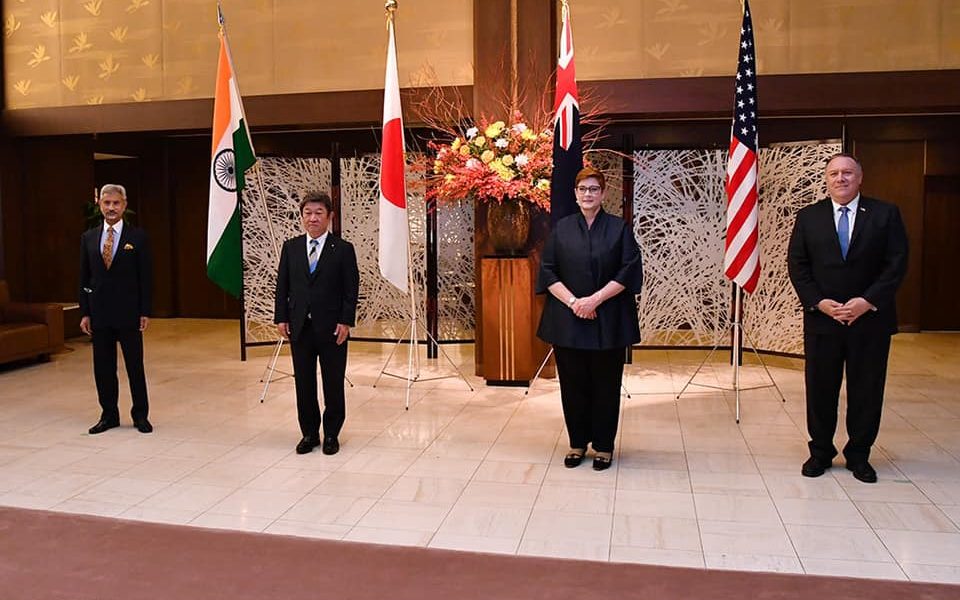 New Delhi: Even as United States made an explicit call on its Quad partners to ‘collaborate’ against China, there was a more cautious approach from India, Japan and Australia, with none of their foreign ministers naming Beijing as the core of their aligned interests.

The second meeting of foreign ministers of the four so-called ‘Quad’ countries on Tuesday was the first international conference hosted by Japan after COVID-19 was declared as a pandemic earlier this year.

As the transcript published by US State Department demonstrated, Secretary of State Mike Pompeo was unabashed in urging the Quad countries to come together on an anti-China platform.

“As partners in this Quad, it is more critical now than ever that we collaborate to protect our people and partners from the CCP’s exploitation, corruption, and coercion,” he said in the opening remarks at the three-hour long meeting.

Pompeo added that China’s aggressive stance was witnessed in the “South China Sea, in the East China Sea, the Mekong, the Himalayas, the Taiwan Straits”. Among the public statements, including by India, this was the only reference to the military stand-off.

Had a great dinner with my counterparts Foreign Ministers @moteging, @DrSJaishankar, and @MarisePayne. FM Motegi has been a gracious host! Meetings like this will help the members of the U.S.-India-Australia-Japan Quad realize our shared goals for the Indo-Pacific region. pic.twitter.com/gOXNaU4lk7

The senior US administration official also blamed China’s “authoritarian nature” for a “cover-up’ on the spread of the coronavirus pandemic. “The regime’s authoritarian nature led its leaders to lock up and silence the very brave Chinese citizens who were raising the alarm.”

While the US had made an unambiguous call for the Quad on China, the official transcript shows that there was a studied silence from the other foreign ministers.

Indian external affairs minister S. Jaishankar stated that the pandemic made it clear that it was imperative for “like-minded countries to coordinate responses” on various challenges.

“Our objective remains advancing the security and the economic interests of all countries having legitimate and vital interests in the region,” said Jaishankar. While all four countries are having fractious ties with China of various degrees, India is the only country with whom the Asian giant is currently involved in a military stand-off for over five months in the long disputed border’s western sector.

Delighted to join my QUAD colleagues at our Ministerial consultations in Tokyo. Thank FM @moteging for his gracious hospitality.https://t.co/hFSZRPu7Rf pic.twitter.com/1gfxiHdHXs

Jaishankar also defined the Quad as “wide-brimmed and pluralistic democracies with shared values”, who are collectively committed to the importance of “maintaining a free, open and inclusive Indo-Pacific”. “We remain committed to upholding the rules-based international order underpinned by the rule of law, transparency, freedom of navigation in international seas, and respect for territorial integrity and sovereignty and peaceful resolution of disputes.”

“The Quad has a positive agenda. It’s a diplomatic network that assists us as democracies to align ourselves in support of shared interests. We believe in a region governed by rules, not power. We believe in the fundamental importance of individual rights and in a region in which disputes are resolved according to international law. And we believe in regional security and recovery from COVID-19 that supports sovereign choices for the countries of the Indo-Pacific,” said Payne.

The #Quad is a diplomatic network with a positive agenda: a region governed by rules, not power, & regional security & recovery from #COVID19 that supports sovereign choices for the countries of the Indo-Pacific. Thanks to @Moteging @DrSJaishankar & @SecPompeo 🇦🇺🇮🇳🇯🇵🇺🇸 pic.twitter.com/v72HejnmIl

The host, foreign minister Motegi Toshimitsu, also doesn’t seem to have joined United States in waving the stick at China, at least publicly.

As per tradition, there were separate statements from all four countries on the meeting. All of them mentioned that the discussions included topics of maritime security, cyber security, infrastructure and disaster relief. Read-outs from India, Australia and United States specifically highlighted the need to strengthen supply chains.

While all countries mentioned that regional issues were discussion, Japan stated that views were exchanged on “North Korea and East and South China Sea”. Australia called for strengthening cooperation with regional partners and institutions, which was also mentioned by Japan’s Motegi.

The Australian foreign ministers also underlined the need for “quality infrastructure investment as a driver of strong, sustainable, balanced and inclusive economic growth, which will be critical to supporting the region’s economic recovery”. Canberra has been one of the drivers to find an alternative to China’s Belt and Road initiative which finances and constructs connectivity infrastructure across the world.

The Australian readout was also the only one which stated that the four Quad foreign ministers emphasised that  “especially during a pandemic, it was vital that states work to ease tensions and avoid exacerbating long-standing disputes”.

All the ministers also held separate bilateral meetings on the sidelines. They also collectively called on the new Japanese prime minister, Yoshihide Suga.

The first meeting of senior officials of the four countries took place in May 2007, as a consequence of their coordinated response to the 2004 tsunami. However, China had issued a protest note to all the four countries after the meeting, terming it as an anti-China alliance.

Due to various factors and the differing interest of the countries, the Quad went dormant for a decade. The 2017 East Asia Summit saw the senior officials again meeting to reaffirm support for a “free and open Indo-Pacific” and the centrality of ASEAN in the regional security architecture.

The annual gathering in New York for the UN General Assembly in September 2019 led to the foreign ministers upgrading the ‘quad’ format for the first time.

Last year, China’s public criticism of the Quad had been more vague. Chinese foreign minister Wang Yi had stated in July 2019 that one of the principles of regional cooperation should be to “focus on openness and inclusiveness, without forming factions or seeking small cliques”.

In 2020, the gloves were off – from both sides. Last month, China’s vice foreign minister Luo Zhaohui, who had been earlier posted as Chinese ambassador to India, described the Quad as an “anti-China front line”, which is apparently “also known as the mini NATO”.