Though China was not mentioned by name, references to a “free and open” Indo-Pacific was perceived to be a challenge to Beijing’s ambitions. New Delhi: Even as China propounded that the ‘clique’ will be a short-lived one, the ‘Quad’ leaders agreed to push ahead on their initiative to distribute over one billion vaccines in Asia while adding a new partnership on regional infrastructure and STEM fellowships in US institutions.

China was not named in public remarks and bilateral documents but repeated reference to a “free and open” Indo-Pacific was perceived, as always, to be a challenge to Beijing’s ambitions in the Indian Ocean.

Ahead of the summit, the Chinese foreign ministry had been dismissive. “China always believes that any regional cooperation mechanism should not target or harm the interests of a third party. A closed, exclusive clique targeting other countries runs counter to the trend of the times and the aspirations of regional countries. It will find no support and is doomed to fail,” said spokesperson Zhao Lijian on Friday.

The four leaders had met virtually six months ago in March 2021, when they agreed to manufacture one billion doses by 2022 for distribution in Asia by ramping up India’s manufacturing capacity.

Two weeks after the virtual summit, India suspended exports of COVID-19 vaccines as the number of cases went up steadily and immunisation rates remained low. A devastating second wave hit the country over April and May, bringing India to its knees as it looked for assistance from abroad.

In the run-up to the Quad summit, India announced last week that it would restart vaccine exports from October. This was “appreciated” by the other quad leaders and mentioned in the joint statement.

According to the joint statement, India’s Biological E limited will manufacture one billion doses by 2022.

Indian foreign secretary Harsh Vardhan Shringla told reporters after the summit meeting that Modi informed his counterpart that Biological E would be ready to export eight million doses of Johnson and Johnson’s vaccine by the end of October.

Quad members, including India, would contribute towards the funding of the vaccine distribution.

The Indian prime minister also proposed a “common travelling protocol”, which would allow for mutual recognition of COVID-19 vaccine certificates. The Indian PM had already raised this during the global COVID-19 summit. It is being proposed amidst concerns in New Delhi that Indian nationals are facing roadblocks in international travel.

As per official sources, the Quad Leaders’ Summit had four themes – COVID-19 response; climate change; tech and cyber security; and Afghanistan and regional security. Besides the opening remarks, the rest of the summit was held behind closed doors, and a previously negotiated joint statement was released at the end.

Notable among the new initiatives announced was the launching of a new Quad infrastructure partnership. While Shringla dismissed questions that it was an answer to China’s Belt and Road Initiative, giving an alternative to regional infrastructure building had been high on the agenda.

The joint statement said that the Quad members would meet regularly to coordinate efforts to “map the region’s infrastructure needs, and coordinate on regional needs and opportunities”. “We will cooperate to provide technical assistance, empowering regional partners with evaluative tools, and will promote sustainable infrastructure development,” it added.

Besides, the Quad also talked of “open, fair, and transparent lending practices in line with international rules and standards for major creditor countries, including on debt sustainability and accountability, and call on all creditors to adhere to these rules and standards”.

Besides, they agree to start cyberspace cooperation to combat cyber threats and to look for new collaboration opportunities in space, including sharing of satellite data.

“In space, we will identify new collaboration opportunities and share satellite data for peaceful purposes such as monitoring climate change, disaster response and preparedness, sustainable uses of oceans and marine resources, and on responding to challenges in shared domains. We will also consult on rules, norms, guidelines and principles for ensuring the sustainable use of outer space,” said the joint statement.

The Quad also announced a new fellowship initiative, funded by private companies, that will allow 100 students from the four countries to study science, technology, engineering and mathematics courses in US institutions.

Starting with biotechnology, the Quad also announced that they would monitor trends in critical and emerging technologies of the future and identify related opportunities for cooperation. “We are also launching today Quad Principles on Technology Design, Development, Governance, and Use that we hope will guide not only the region but the world towards responsible, open, high-standards innovation”.

The ‘practical’ steps announced by the Quad is strictly in the non-security field, but the rationale for the four countries gathering together, as reiterated in the joint statement, was to enforce their strategic vision of the Indo-Pacific.

“Together, we recommit to promoting the free, open, rules-based order, rooted in international law and undaunted by coercion, to bolster security and prosperity in the Indo-Pacific and beyond. We stand for the rule of law, freedom of navigation and overflight, peaceful resolution of disputes, democratic values, and territorial integrity of states”. There was also a reiteration of support for the adherence to the UN Convention on the Law of the Sea (UNCLOS) “to meet challenges to the maritime rules-based order, including in the East and South China Seas”. China had rejected the jurisdiction of an Arbitral Tribunal appointed under UNCLOS, which gave an order on the overlapping maritime claims between Beijing and Manila. Incidentally, Quad member US has still not ratified the UNCLOS due to opposition from Congress.

Reiterating ASEAN centrality, the four leaders welcomed the 2021 EU Strategy for Cooperation in the Indo-Pacific. There has been a rift between the US and Europe after the newly-launched trilateral partnership led to France losing its $90 billion submarine deal with Australia.

In their opening remarks, three of the four leaders emphasised the democratic credentials of the Quad members.

“This group meeting of democratic partners who share a world view and have a common vision for the future, coming together to take on key challenges of our age, from COVID to climate to emerging technologies,” said Biden.

Describing the Quad as a “force for global good”, Modi stated that it was “based on shared democratic values”.

Australian Prime Minister Morrison said that the member states were “liberal democracies that believe in a world order that favours freedom”. “The Quad is about demonstrating how democracies such as ours, as you said, Mr President, can get things done that can deal with the big challenges that we face in a very complex and changing world”.

With Afghanistan as a separate theme in the summit, the joint statement devoted substantial space to the situation in the war-ravaged country. In between the two Quad summits, the Afghan political leadership had changed dramatically, with President Ashraf Ghani having fled the country and the Taliban firmly in control after a blitzkrieg military conquest.

“We reaffirm that Afghan territory should not be used to threaten or attack any country or to shelter or train terrorists, or to plan or to finance terrorist acts, and reiterate the importance of combating terrorism in Afghanistan,” said the joint statement. It also called for the countries to deepen counter-terrorism and humanitarian assistance in line with UN Security Council resolution 2593.

The Quad also called on the Taliban to provide safe passage for any persons wishing to leave Afghanistan and ensuring human rights for all Afghans, including women, children and minorities.

India’s top diplomat Shringla had told Indian reporters in Washington that the leaders had noted that the “ruling dispensation did not appear to be an inclusive one”, with barely any representation from ethnic minorities and women. 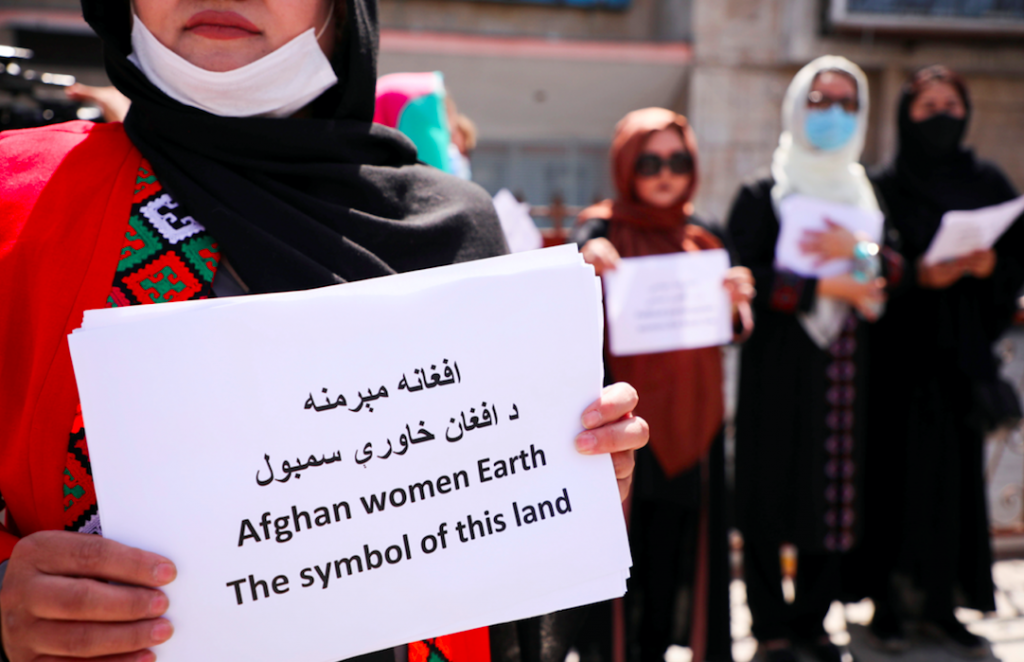 FILE PHOTO: Afghan women’s rights defenders and civil activists protest to call on the Taliban for the preservation of their achievements and education, in front of the presidential palace in Kabul, Afghanistan September 3, 2021. Photo: Reuters/Stringer

However, the joint statement strikingly had no mention of the need for an “inclusive” government in Afghanistan.

Shringla also asserted that there was “very careful consideration” given to the support of “certain hard-line elements in that country, including terrorist groups by [a] certain neighbour of Afghanistan”.

“I think there was there was a clear concern expressed in that regard on Pakistan’s role in Afghanistan,” he claimed.

In line with the Indian position, the Quad joint statement denounced “the use of terrorist proxies and emphasised the importance of denying any logistical, financial or military support to terrorist groups which could be used to launch or plan terror attacks including cross-border attacks”.

Shringla felt that it was often overlooked that while Pakistan keeps “projecting itself as a facilitator whereas, it has really been in many senses an instigator of some of the problems that we’re dealing with, in our neighbourhood and beyond”.