Civil society groups and political parties claim the move would mean “giving away” the state’s land to Myanmar. The external affairs ministry has, however, denied the allegations. 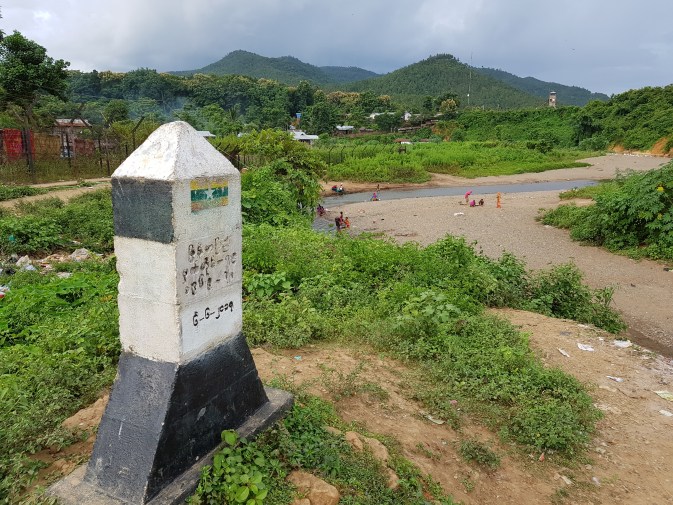 A border marker at the Indo-Myanmar border in Moreh. Credit: Twitter

New Delhi: Controversy over the construction of a boundary pillar in the Moreh subdivision of Manipur, along the India-Myanmar border, has triggered widespread public outcry in the state.

According to local media reports, the residents of the border village of Kwatha Khunou alleged that the Indian government moved a border pillar about three km into Manipur, triggering opposition from several civil society organisations and political parties as it would mean “giving away” the state’s land to Myanmar. Many also alleged in the local media that the controversial pillar no. 81 was set up inside Manipur because New Delhi “gave up” its land during the border survey conducted early this year.

The construction of subsidiary border pillars in Moreh commenced in May after completion of the border survey undertaken by India and Myanmar governments in order to sort out issues of land dispute between the two countries.

The issue came to light after Tengnoupal deputy commissioner Abujam Tombikanta inspected the new border pillar 81, which was set up on June 22, and thereafter said it was erected “at least three km inside the Indian territory”. The locals corroborate the DC’s version and demanded that the pillar be removed.

Reacting to the allegations, the Union Ministry of External Affairs, however, issued a statement on July 8 denying it. The statement said, “We have come across media reports stating that certain boundary pillars in the Manipur sector of the India-Myanmar international boundary have been allegedly shifted. These reports are completely baseless and unsubstantiated. This sector of the international boundary is settled and there is no confusion as to its alignment.”

The statement also reportedly said that the border survey was conducted “keeping with the India-Myanmar Boundary Agreement of 1967”. It added, “Recently, routine survey work has been carried out jointly by the Indian and Myanmar survey departments during which work on construction of subsidiary pillars in between already settled main boundary pillars 81 and 82 along zero line, that is, agreed and settled international boundary, has also been undertaken. This has been done with the objective of apprising the local residents on both sides of the border of the exact alignment of the international boundary.”

On July 7, state chief minister N. Biren Singh said, “No Manipuri would want to lose any piece of land but no action can be taken hastily as it is a very sensitive issue”, adding, “There is nothing to panic as the state government is committed to facilitate solving the problem amicably”. The chief minister also dispatched a ministerial team, led by revenue minister Karam Shyam, on July 6 to Kwatha Khunou for a spot inspection. Shyam too stated that there “is no change in the border”.

However, not many are willing to accept the government’s contention. On July 5, a six-member team of a powerful civil society organisation, United Committee Manipur (UCM), met the chief minister with its report put together after a visit to the border villages of Kwatha Khunou and Kwatha Khunjao. A press note issued thereafter stated that “complacency and negligence of Assam Rifles guarding the border” has “resulted in the loss of the state’s territory”.

During its visit to the spot, UCM leaders painted the pillar black and raised slogans in protest. The pillar was later reportedly re-painted white by the Myanmar authorities.

The UCM’s trip to the spot was followed by a visit by the leaders of state Congress. Speaking to local reporters later, Congress MLA Kh. Joykumar said, “Not only the pillar number 81 but 82 and 83 have been found wrongly erected by encroaching an area of three, two and one-and-half kilometres towards India.”

On July 4, an 18-member team of Kangleipak Kamba Lup and the political party Peoples’ Resurgence and Justice Alliance too tried to reach the border area with hammers in hand with the aim of breaking the controversial pillar. The team was stopped by Assam Rifles personnel as a curfew was declared in the area.