New Delhi: On the first foreign visit by Sri Lankan President Gotabaya Rajapaksa, India on Friday extended two additional lines of credit worth $450 million for infrastructure and counter-terrorism, with both sides putting priority on security cooperation.

Rajapaksa won the presidential election two weeks ago by obtaining 52% of the votes, largely from the Sinhala majority population. Since China’s footprint in Sri Lanka had spread during his elder brother’s presidential tenure, India had rushed external affairs minister S. Jaishankar to visit Colombo and invite the president-elect to New Delhi for his first state visit abroad. 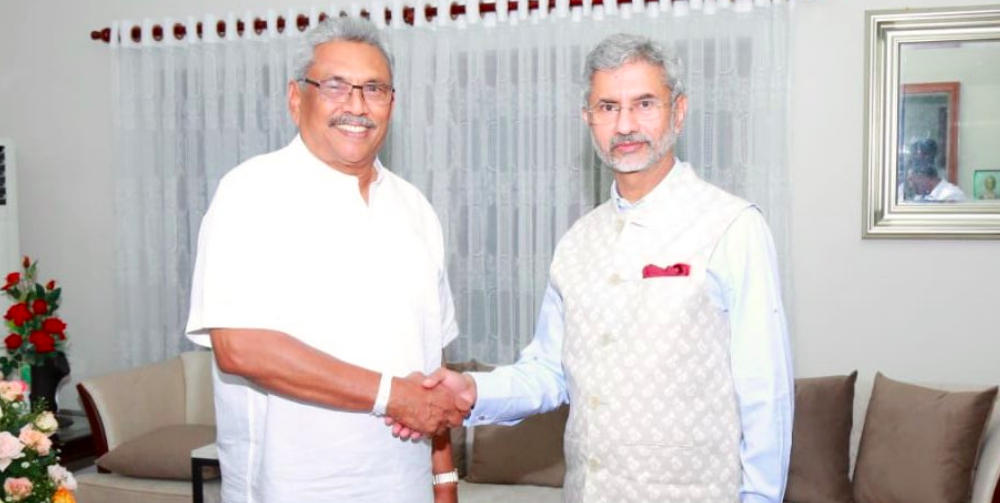 Emerging from the talks, Rajapaksa claimed that discussions were “extremely cordial and reassuring”.

In total, the discussions went on for 90 minutes. This included about an hour of one-on-one talks between Modi and Rajapaksa, without any accompanying officials.

The very fruitful hour-long 1:1 with PM @narendramodi focused on several key aspects which are important and close to our nations’ hearts and I am confident we will build a strong relationship based on mutual respect and shared values. #India #LKA pic.twitter.com/PIHho3kz49

Also seeking to ameliorate Indian concerns vis-à-vis China, Rajapaksa assured, “Whilst with India the cooperation is multifaceted with priority given to security-related matters, with other counties the initiatives for cooperation are by and large, economic and commercial.”

According to sources, Rajapaksa told the Indian PM that he had considered relations with India as a priority since “his young days”.

Rajapaksa also apparently told the Indian PM that “he would not allow any third force to come in between cooperation with India”.

Also read: Sri Lanka: Gotabaya’s Triumph Is Constrained by Circumstances Beyond His Control

The former defence secretary told the media on Friday that security issues “took priority” in his talks with India. “Since our recent experience in April this year, we have had to rethink our national security strategy and assistance from India in this regard would be most appreciated,” he said.

Rajapaksa was referring to the Easter Sunday bombing of churches and hotel which left over 250 dead. According to Sri Lankan authorities, all the suicide bombers were Sri Lankan nationals belonging to a homegrown Islamist group. Syrian-based ISIS has claimed responsibility for the attack.

The Sri Lankan president’s election campaign was based on the national security platform, which resonated among the Sinhalas. The minorities in the north and eastern provinces voted largely in favour of his rival, ruling party candidate.

His win marked the return to power of the Rajapaksa family. His brother, Mahinda Rajapaksa had been friendly towards India, but had seemingly turned towards China in last few years. Mahinda Rajapaksa had overseen the entry of China in key strategic infrastructure projects, including Hambantota port project and Colombo port city project.

“We will continue to work closely with India to ensure that Indian ocean remain as a zone of peace,” said Rajapakse.

The Indian prime minister was clearly looking at security cooperation to find a common ground with the new Sri Lankan president.

“The security and development of our two countries are inseparable. Therefore, it is natural that we should be aware of each other’s safety and sensibilities,” said Modi.

He noted that his first visit after winning the general elections this year had been to Colombo to “express India’s unwavering support in the Sri Lankan fight against terrorist and extremist forces” following the April attacks.

“I have discussed in detail with the President Rajapaksa for mutual security and to further strengthen mutual cooperation against terrorism. Sri Lankan police officers in major Indian institutions are already receiving the benefit of counter terrorist training,” he added.

As per sources, Rajapaksa had expressed interest in training and intelligence sharing.

Modi announced that India has extended a special Line of Credit of $50 million dollars to Sri Lanka “to combat terrorism”.

Alongside, he also extended a new $400 million line of credit to “give a boost to infrastructure and development in Sri Lanka”.

The Indian prime minister also claimed that both of them “openly exchanged views on reconciliation in Sri Lanka”.

“President Rajapaksa told me about his inclusive political outlook on ethnic harmony,” he added.

Indian government sources insisted that there was a “meeting of minds” on the issue of reconciliation with the Sri Lankan Tamils. Rajapaksa apparently reiterated his previous statement that he will be “president of all Sri Lankans irrespective of ethnicity or religion or voting choices”.

“I am confident that the Government of Sri Lanka will carry forward the process of reconciliation, to fulfill the aspirations of the Tamils for equality, justice, peace and respect. It also includes the implementation of the 13th amendment,” Modi said in his press statement. He also added that India “will become a trusted partner for development throughout Sri Lanka including North and East”.

This was the first time in several years that India had referred to the 13th amendment which is about devolution of powers to the provinces.

This is the second time in a month that India has brought up the Tamil issue. Earlier, the Indian ministry of external affairs had claimed that Jaishankar had also urged Rajapaksa to meet the aspirations of the Tamil people last month.

Rajapakse, however, did not refer to the Tamil issue in his own statement. In contrast, he did mention the Indian fishermen issue – which also figured in Modi’s public remarks.

He announced that Sri Lanka will “take steps to release the boats belonging to India in our custody”. Indian sources claimed that Sri Lankan President had gone “an extra mile” on this subject.

Due to depleting fish stocks at home, Indian fishermen often cross the international border and are taken into custody by Sri Lankan navy. While Sri Lanka releases the Indian fishermen, their boats are usually held.

The visiting Sri Lankan leader also brought up the matter of increasing trade. “I discussed with the PM how Sri Lanka could benefit from certain economic sectors where India is strongly positioned,” he said.

In the end, Rajapaksa extended an invitation to Modi to visit Sri Lanka as the first head of state since the presidential election.