ICAN has shaken the NPT system but India remains uncomfortable about arms control treaties that bypass the Conference on Disarmament. 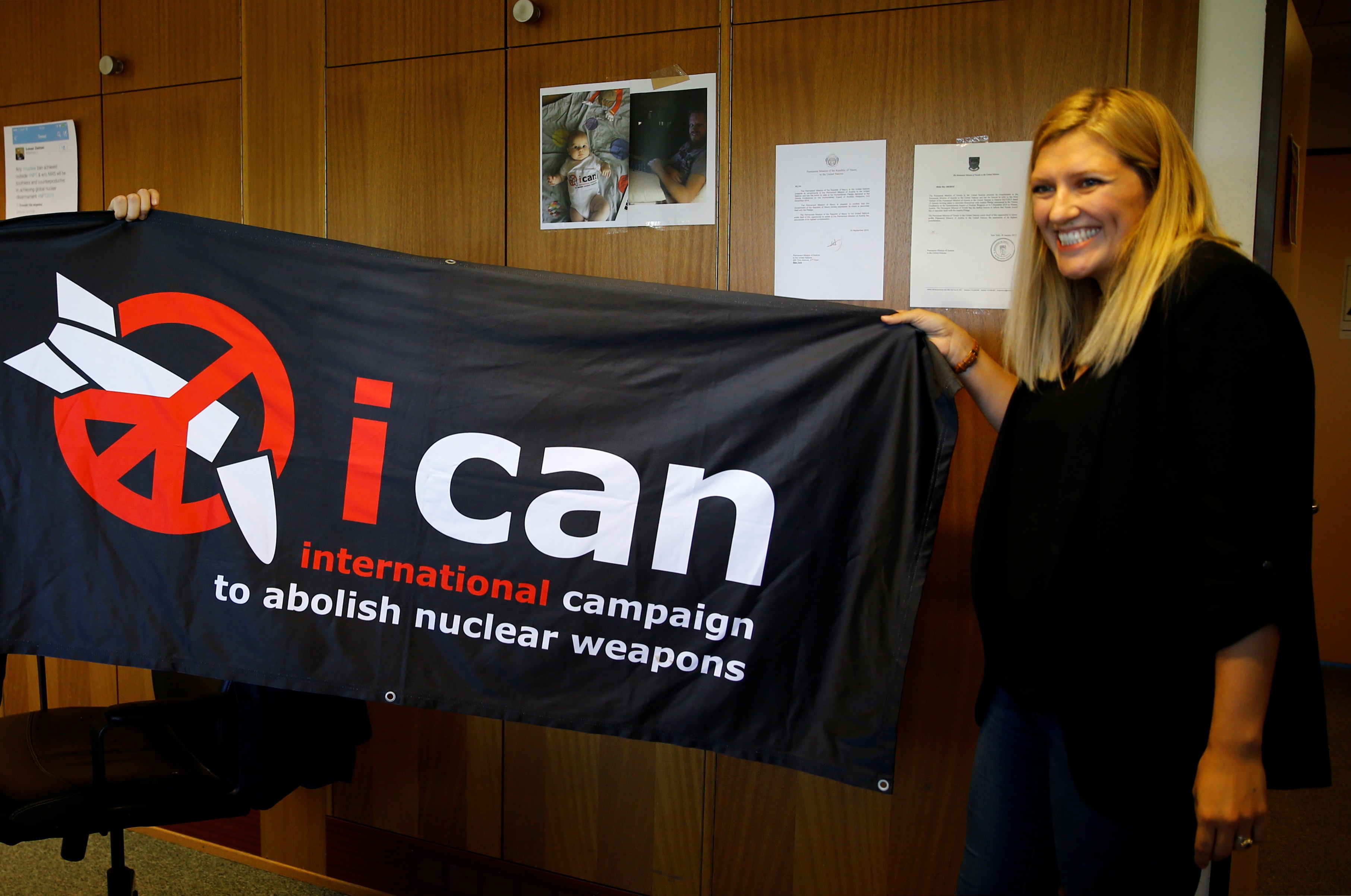 New Delhi: India may have gone from being a state that decried nuclear weapons to one that possesses them but its continued commitment to an international treaty banning their stockpiling and use has made it somewhat of an outlier among other nuclear armed states. So why then has South Block not popped the champagne (or performed the sanskari equivalent of a celebration) in honour of the winners of the 2017 Nobel peace prize, the International Campaign to Abolish Nuclear Weapons? After all, ICAN has pushed the idea of a ban to the stage where a full-fledged treaty text now exists, signed by 53 countries around the world, and is scheduled to enter into force (for its signatories, at any rate) later this year.

India abstained on resolutions and boycotted talks in the run up to the treaty largely due to procedural reasons. But Indian officials acknowledge a sense of grudging admiration for the doggedness of the new breed of disarmament activists who are trying to upend the business-as-usual consensus on the part of the five official nuclear weapons states – whose indefinite possession of deadly weapons of mass destruction  has been sanctified by the NPT.

While India, like other nuclear-armed states, stayed away from the treaty negotiation process, it was careful not to attack the initiative. The sense of frustration among most countries at the unwillingness of nuclear weapon states to implement their disarmament obligations was palpable, say officials. Therefore, for India, it was important to note this ground-swell.

Even as it opposed the new initiative in October 2016, therefore, New Delhi made special mention of “efforts made by some of the cosponsors to reach out to India”.  “Continued dialogue and consultation is necessary to bridge the current divides on nuclear disarmament which remain deep and substantive,” India had asserted.

Among the nuclear weapon states, the Indian delegation was the only one to go up to the activists at the UN’s first committee to acknowledge their expertise. “We have our differences [with ICAN] but always had mutual respect,” a senior Indian diplomat told The Wire

In March this year, India’s permanent representative to the UN Conference on Disarmament (CD) in Geneva, Amandeep Singh Gill formally announced India’s intention to stay away from the ban conference. At the same time, India had described the efforts behind the initiative as being “sincere”.

A month earlier, in February 2017, India had also admitted that “whatever the prospect of the proposed ban Conference, it reflects the aspirations of a large number of states and a dedicated NGO community led by a new generation of young leaders passionate about the noble cause of ridding the world of nuclear weapons”.

In July, 122 countries voted in favour of the final draft of the Treaty on the Prohibition of Nuclear Weapons – a legally binding instrument which reached fruition 10 years after the ICAN movement was launched. The treaty will come into force in December.

The Nobel committee’s official citation commends ICAN, an umbrella group of NGOs in 100 countries, for drawing “attention to the catastrophic humanitarian consequences of any use of nuclear weapons and for its ground-breaking efforts to achieve a treaty-based prohibition of such weapons”.

Though there has been no official statement from India on the winner of 2017 Nobel peace prize, a senior MEA official told The Wire that ICAN’s achievements may still be illusory but it did illustrate the new reality of policy activism.

“In a world of brutal and self-serving cynicism, the [Nobel] prize acknowledges there is still place for innocent but passionate commitment to a popular utopian goal,” he said. “It is a prize for a 21st century generation NGO that has taken the lead in breaking the back of one of the pillars of 20th century nuclear order – the NPT [Nuclear Non-Proliferation Treaty].”

The prize is also a demonstration of the new, coordinated method of campaigning between states and civil society actors. ICAN may have created and sustained the public campaign, but it required the institutional backing from states to carry the proposal through the corridors of United Nations.

Why India stayed away

The main reason India boycotted the ICAN-sponsored treaty initiative was that it believes the CD is the only forum to negotiate the elimination of nuclear weapons.

This was reiterated by India’s permanent representative to the UN, Syed Akbaruddin in New York at the high-level plenary to commemorate and celebrate the international day for the total elimination of nuclear weapons.  “India considers the Conference on Disarmament – the world’s single multilateral disarmament negotiating forum – as the appropriate forum for the commencement of negotiations on nuclear disarmament,” he said on September 26.

Of course, the CD remains deadlocked and can’t take forward its agenda on the proposed Fissile Material Cut-Off Treaty and Prevention of Arms Race in Outer Space, mainly due to procedural objections by Pakistan – backed by China.

“We regret that the [CD] has been prevented from adopting a programme of work that reflects the international community’s desire for progress on nuclear disarmament and non-proliferation in all its aspects,” Akbaruddin said.

India was not the only country which boycotted the two nuclear ban negotiating conferences in March and July. None of the other eight nuclear weapons nations – the US, UK, China, France, Russia, Pakistan, Israel and North Korea –  participated in the talks. Overall, 69 countries kept off – most of whom included Asian and European countries who are under Washington’s nuclear umbrella.

While the instrument is a legally binding treaty, it will obviously not be applicable on those who do not sign it.

“We do not intend to sign, ratify or ever become party to it. Therefore, there will be no change in the legal obligations on our countries with respect to nuclear weapons,” the UK, US and France said in a joint statement after the UNGA adopted the new treaty on July 7.

Over a week later, India also reiterated that it cannot be party to the treaty and “so shall not be bound by any of the obligations that may arise from it”.

The external affairs ministry spokesperson also underlined the fact that “this treaty in no way constitutes or contributes to the development of any customary international law”.

Utility of the ban treaty

In line with this reality, the press release announcing the peace Nobel acknowledges that the prize has been given for an aspirational idea. “The Norwegian Nobel Committee is aware that an international legal prohibition will not in itself eliminate a single nuclear weapon, and that so far neither the states that already have nuclear weapons nor their closest allies support the nuclear weapon ban treaty”.

A critique published in the Bulletin of American Scientists after the UNGA vote had questioned this assumption. Well known US arms control experts Scott Sagan and Benjamin Valentino had said that there “was simply no evidence to suggest that the ban’s approach to stigmatising nuclear weapons will be an effective path to disarmament”.

They pointed out that research has shown that it is easier to predict compliance if others in the peer group also observe the laws. “In the case of the ban, all nuclear weapons states know that the rate of compliance among other nuclear weapons states is zero. Such a ban, therefore, might ultimately do more to undermine the gradual and step-by-step disarmament norm rather than strengthen it,” said the authors.

Indian officials have spelled out their formula for a comprehensive nuclear weapons convention – prohibition on use, universal prohibition on possession, complete elimination and international verification. New Delhi’s reference to the CWC as a model is due to the fact that it is the only international “verifiable” pact eliminating an entire category of weapons of mass destruction.

“A treaty focused primarily on prohibition of nuclear weapons would have made eminent sense in 1945, before the military utility of nuclear weapons was demonstrated and acted upon – by one country after another, in one form or another – so much so, today, 25 years after the end of the Cold War and 71 years into the nuclear age, the security policies of countries having almost half the world´s population are linked to nuclear weapons,” said Indian ambassador to Spain D.B. Venkatesh Varma, one of the MEA’s top disarmament experts, at an international seminar on “A World Free of Nuclear Weapons” in February 2017.

Accordingly, the first step cannot be ‘stigmatisation’ as nuclear ban treaty supporters assert, but reducing the military utility of nuclear weapons by narrowing the circumstances of their use.

The second phase, as delineated by Varma, is a global treaty that would ensure nuclear weapons were retained only for deterrence. The final phase would be to conclude a legal instrument that would prohibit their use under any circumstances.