Political parties in Nepal want to be seen as standing up to India, the 'old bully', and appearing close to China, the much-needed 'counterweight' to India. 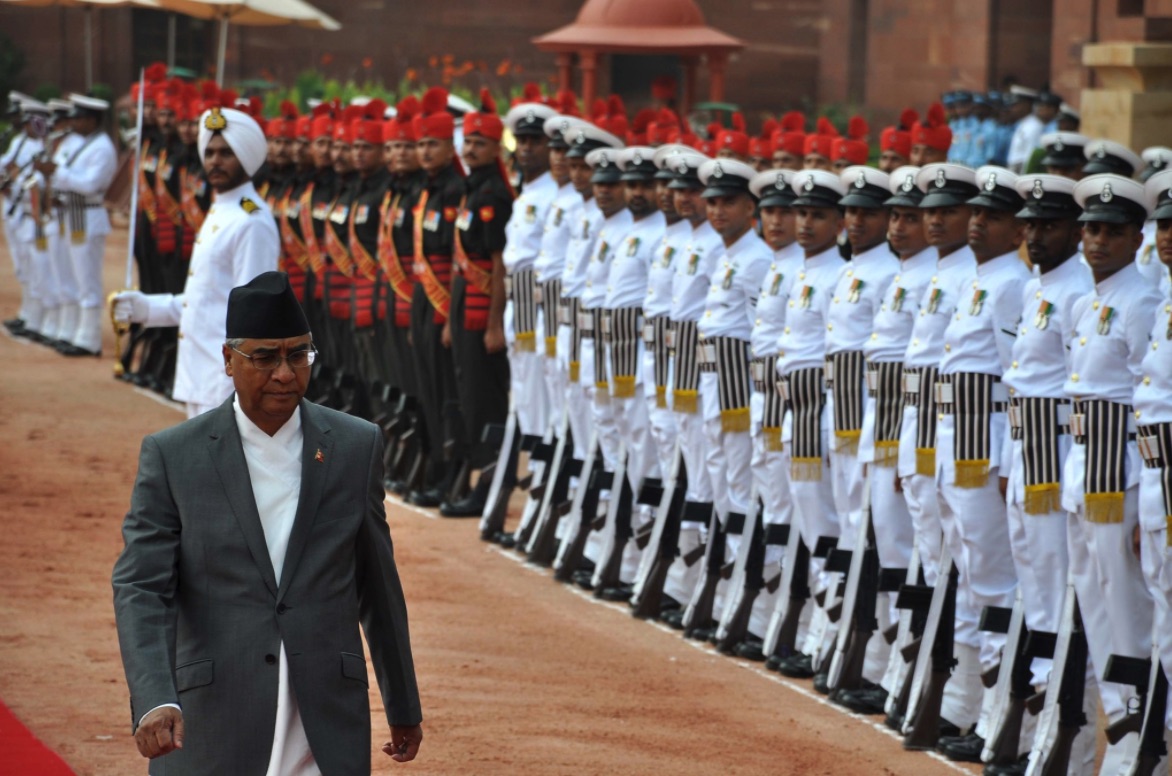 Kathmandu: Should a new Nepali prime minister visit India upon assuming office, before any other country, just to keep alive an outdated tradition? This is a question that is being increasingly asked in Nepal following Prime Minister Sher Bahadur Deuba’s just-concluded five-day state visit to India. Deuba’s visit, just like those of his predecessors K.P. Sharma Oli and Pushpa Kamal Dahal ‘Prachanda’, both undertaken after the promulgation of new Nepali constitution, is believed to have achieved little.

Before Deuba’s state visit, there was a consensus in Nepal that the inundation in the Terai plains – partly attributable to the construction of roads and dams on the Indian side of the Indo-Nepal border – should be Deuba’s top priority in his one-on-one with his Indian counterpart Narendra Modi. But neither the 46-point joint communique nor the speeches of the two prime ministers following their official meeting mentioned long-term flood-control measures. In fact, there was little of substance in the longish joint statement.

Prior to his departure to New Delhi, Deuba struggled to finalise the agenda for his India visit. Reacting to events on the ground, Deuba had nonetheless reassured his countrymen that flood control would be a top priority, but to no avail. Another major issue that was to be discussed with India, the long-delayed Pancheswor power and irrigation project, also came to a naught, as the joint secretary-level meeting between India and Nepal could make no headway.

Interestingly, of the eight ‘major’ agreements that were signed during Deuba’s India trip, four relate to the release of the $1 billion India had promised after the 2015 earthquakes. These four points could easily have been amalgamated into one point. The two countries also agreed to cooperate on ‘standardisation and conformity assessment’ of products sold in each other’s territories, on the building of a cross-border bridge over the Mechi River in eastern Nepal, on the control of drug trafficking and on greater cooperation between the chartered accountants of the two countries.

In other words, there was nothing new of substance in these agreements. That being the case, anything that Deuba did and said in New Delhi was bound to be closely analysed in Kathmandu, for many suspected ulterior motives behind his visit. India was instrumental in cobbling together the current Nepali Congress-Communist Party of Nepal (Maoist Center) coalition government to replace the ‘nationalist’ government of Oli. India had felt Oli needed to go because of his ‘pro-China’ bias and his rigid stand against the amendment of the constitution to accommodate Madhesis.

India invested a lot of political capital in bringing together the Congress-Maoist coalition at the end of 2016. As per the understanding between these two parties, Maoist chairman Prachanda would lead the new coalition government for nine months, after which the baton would be passed to Deuba, and that is exactly what happened. This explains Deuba’s red-carpet treatment in India this time, with Indian external affairs minister Sushma Swaraj receiving him at the Indira Gandhi International Airport. Bar one, all of Nepal’s previous prime ministers visiting India had been received by junior ministers or secretaries.

Also read: How Nepal and India Can Keep Their Relationship Special

The importance the Modi government accorded to Deuba was also evident from Modi’s unscheduled meeting with him, besides the official one planned a day later. The reading in Kathmandu is that New Delhi wants to keep Oli out of power at all costs and thus fully backs the ruling coalition.

Just before Deuba left for India, the ruling coalition had pushed for the amendment of the constitution to address the demands of the agitating Madhesi parties. But the amendment motion failed. When he went to New Delhi, Deuba could then credibly claim that he had done all he could to accommodate Madhesis in the new charter, but since he could not muster two-thirds votes, his Bill failed. But Deuba during his visit did assure Modi that he could continue to push for the amendment.

This promise did not go down well in Kathmandu. Why does Nepal need to assure a foreign leader on what is a purely an internal matter? Even Deuba’s speechwriters were surprised when he mentioned the amendment, which was not in the script. This is why when Deuba landed back in Kathmandu, howls of ‘India appeasement’ greeted him.

But Deuba also managed a saving grace of sorts. When an Indian Union minister ‘informed’ Deuba about China’s unreliability as a friend at a programme organised by the India Foundation in New Delhi, Deuba responded that China is “a good friend” of Nepal and has always “respected Nepal’s sovereignty”. It could have been an off-the-cuff response. But few people in Nepal believe that.

It is more likely that even Deuba, India’s old friend in Nepal, realises that being seen as pro-China or, short of that, trying to maintain a ‘balance’ between India and China, will go down well with the electorate. This is a valid calculation. Following the 2015-16 border blockade, the hill-based people, including the tradition ruling elites, have become virulently anti-Indian.

But what about the Madhesis of the Terai plains? Don’t they feel closer to India? Things are not so straightforward there as well. It is true that many Madhesis have kith and kin living right across the border in Bihar and Uttar Pradesh. So there is natural cross-border affinity. But when it comes to relations between Madhesis and India, there are many problematic areas.

The blockade divided Madhesi public opinion. Even the Madhesis who supported the blockade and India’s role in it were mystified when India unilaterally declared the closed borders open and Indian police started chasing away Madhesi protesters from no-man’s land. Madhesis were left scratching their heads about India’s real intent.

But an even stronger factor for growing anti-India sentiments among Madhesis are the dams and roads that India constructs unilaterally along border areas and which contribute to widespread flooding in Terai Madhes every monsoon. This flood season, with over 150 Nepalis already dead, the most common question among Madhesis was: Why is the Nepal government not taking up the issue of inundation with India seriously?

These days, there are very few people in Nepal ready to speak in favour of closer ties with India. Concomitantly, the number of those who favour stronger ties with China is rising.

Political parties want to be seen as standing up to India, the ‘old bully’, and appearing close to China, the much-needed ‘counterweight’ to India.

The bureaucrats in Nepal’s ministries, who mostly come from the traditional elite caste groups, have also deeply internalised the humiliation of the blockade. They are equally determined to reduce Nepal’s dependency on India. With China also in a mood to cultivate friends in Nepal, more and more Nepali bureaucrats are being taken to China on all-expenses-paid trips.

Beaten in its backyard

The Chinese are also taking journalists, businessmen and civil society members in record numbers to see their country. Around 100 Nepali students are given scholarships to study in Chinese universities every year. Not a month passes in Kathmandu without a conference on the Belt and Road Initiative. Chinese tourists, and the shops, restaurants and hotels that cater to them exclusively, have also become ubiquitous sights in Kathmandu and Pokhara, Nepal’s two major towns.

That is not all. China’s Confucius Centres are currently teaching Mandarin to around 40,000 school students in Nepal, with the long-term goal of helping the next generation of Nepalis better understand China. While three different Indian airlines fly into Kathmandu, six fly in from China.

But greater Chinese presence is welcomed because while India is seen as forever trying to meddle in Nepal’s domestic affairs, China has been content maintaining a low-key presence and offering plenty of money for Nepal’s vital development programmes.

Deuba’s comment defending China in New Delhi was perhaps a clearest indication that India can no longer take even its supposedly closest friends in Kathmandu for granted. These days, it is not just UML and Oli that China is cultivating; it now has deep penetration in all major political parties in Nepal.

The turning point, again, was the blockade, as the Chinese were able to cash in on the unprecedented anti-India sentiments in Nepal.

The foreign policy mandarin in New Delhi may not want to hear of how China is slowly displacing India in its own ‘backyard’, but that is the hard truth. I am not entirely sure that this sudden increase of Chinese influence is a good thing for Nepal. But that is not the point here. The point is that any way you look at it, Modi’s Nepal policy has been a failure. Deuba’s recent Delhi visit does nothing to change that hard reality.