Modi in London: Act II May Not Go Quite as He Imagined

Many of those who may have exulted in an Indian prime minister’s visit to London in 2015 seemed to be more cautious in their support this time. 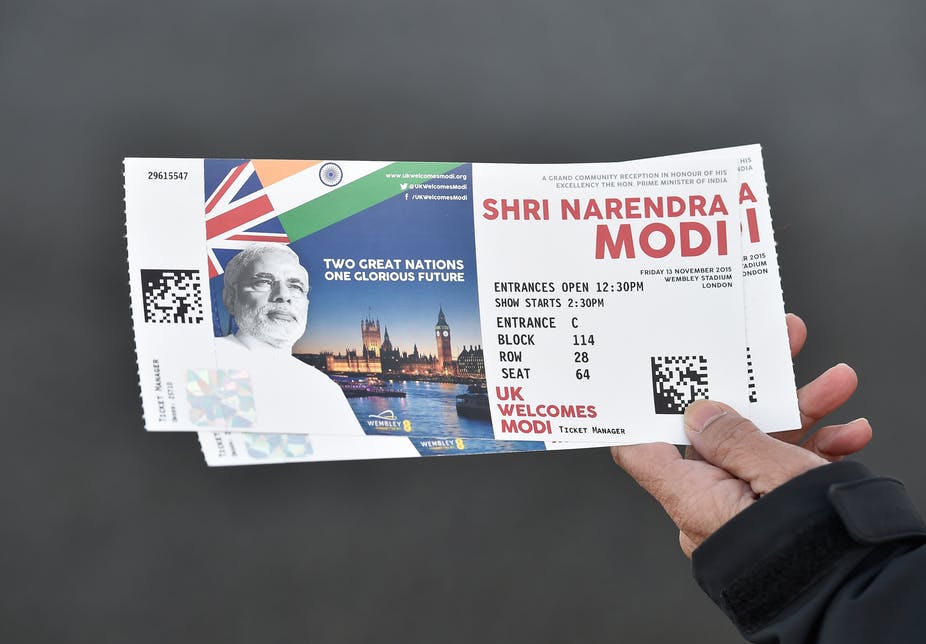 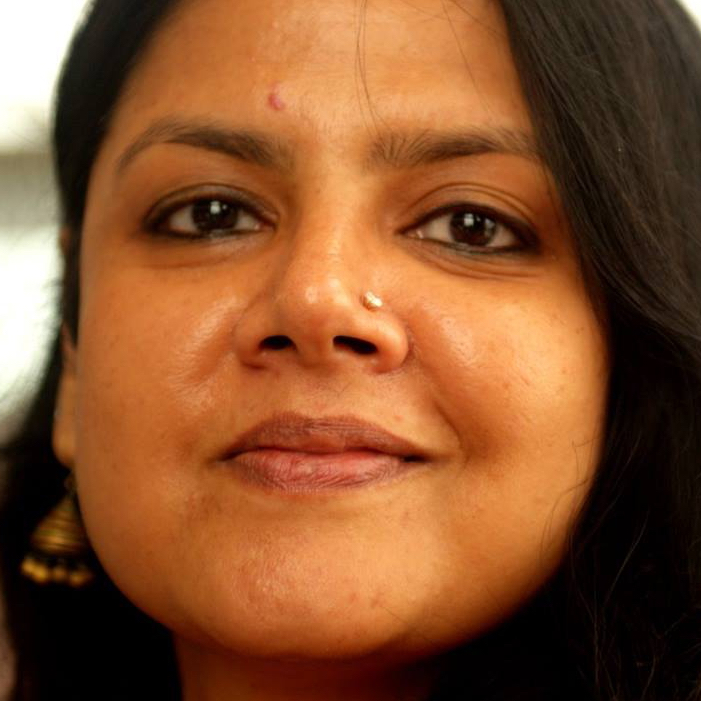 What a difference three years make!

The last time Prime Minister Narendra Modi visited the UK was in November 2015. The visit was hailed as part of an international victory tour, coming as it did only 18 months after his decisive win in the May 2014 Lok Sabha elections. Memories of the numerous legal challenges to his previous visits to the UK in the early 2000s, when he was accused of having played a key role in the massacre of Muslims under his watch as chief minister of Gujarat, were wiped clean as the Indian diaspora exulted in the glory and prosperity he promised to bring to Indians, both within the country and abroad.

A newly-formed Facebook-based group called Indian Ladies in the UK orchestrated the knitting of a crochet blanket (crochet squares were collected from Indian women all across the UK) to present to Modi as a welcome gift, reposing faith in his leadership and expressing pride in this son of the soil. A rockstar like appearance at a packed Wembley Stadium had his over 60,000 fans and supporters in a frenzy. Every word he uttered at that event was savoured by the euphoric crowd that was finally having its moment on the world stage, and in the land of India’s erstwhile rulers no less.

British MPs from across the political spectrum rallied around him, and David Cameron echoed the “achhe din” slogan dutifully. As he went about garlanding Gandhi’s statue in Parliament Square and inaugurating B.R. Ambedkar’s house, Modi assumed the mantle of being a true representative of a newly emboldened and hopeful India. And for the many of those ideologically aligned with BJP’s politics, Modi was the harbinger of a renewed pride in Hindutva.

Mainstream media in India and abroad, infatuated by the spectacular rise of the Modi phenomenon, feasted on this spectacle, even as the lynching in Dadri, Uttar Pradesh in September 2015, of a poor Muslim man Mohammad Akhlaq by a mob that suspected him of storing and consuming beef, had already begun to stain Modi’s reputation. Major intellectuals in India were beginning to provide harsh criticisms of the growing religious intolerance and bigotry in India.

Modi’s visit in November of that year thus provided a large section of the diasporic Indian intelligentsia and progressive activists with a platform to oppose the divisive politics carried out by the foot soldiers as well as leaders of his party, whom Modi seemed to be endorsing through his silence and inaction. A broad coalition of groups such as Awaaz South Asia Watch (formed in the wake of the Gujarat massacres of 2002), the South Asia Solidarity Group, the Indian Workers Association, Castewatch, the largest Dalit activist group in the UK, Sikh, Muslim and Kashmiri groups, feminist groups such as the Southall Black Sisters, and many others with no organisational affiliation, united under the ModiNotWelcome hashtag. For them, Modi’s role in the human rights abuses in Gujarat in 2002 could not be whitewashed in the glory of an electoral victory.

Moreover, in the months following his electoral victory in the Lok Sabha elections, there had been an escalation in the spate of attacks on Muslims, Dalits and women. The protestors organised seminars and meetings and a spectacular projection on to the Houses of Parliament that boldly portrayed Modi as a fascist. On the eve of his visit, about 75 UK-based academics wrote a powerful letter to the leading daily The Independent objecting to the red carpet that Cameron’s government was laying down for Modi in hopes of boosting trade and commerce with India. The academics chose to instead “call attention to Mr Modi’s human rights abuses and to hold him accountable for violations of freedom of speech and religion”. 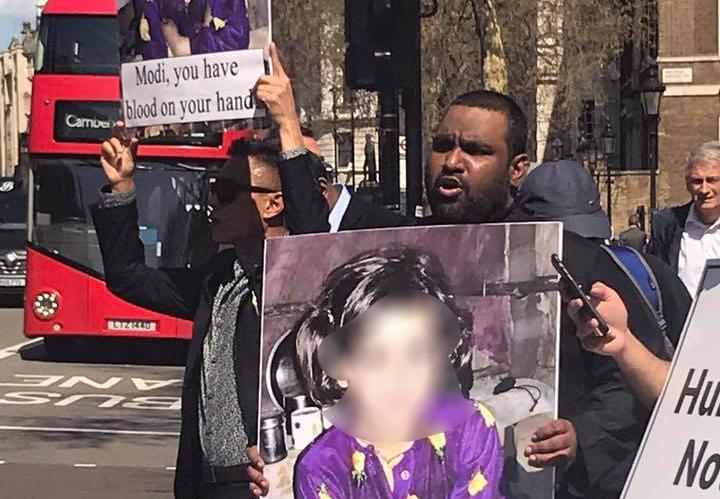 But that was then.

This time around, Modi is in London for the Commonwealth Heads of Government Summit. He insists that he is here on the personal invitation of Prince Charles and the Queen. But this time the Indian diaspora is far more divided than before, perhaps reflecting the deep fractures that have emerged in India’s civil society itself.

The face of the eight-year-old girl who was raped and killed in Kathua and whose rapists were given protection by members of Modi’s party has been stamped indelibly on the conscience of innumerable diasporic Indians. Posters of her face, exemplifying pure innocence as against the barbarity of the communal use of rape, provided the single most dominant image of the response to Modi’s visit on April 18, 2018. Faces of other victims of Hindutva terror, of the journalist Gauri Lankesh, of Afrazul Khan, hacked and burnt to death in Rajasthan, and Junaid Khan, lynched in Haryana, provided a virtual gallery of the dead, darkening Modi’s supposed triumphant return to the UK.

Many of those who may have exulted in an Indian prime minister’s visit to London the last time around seemed to be more cautious in their support this time, even expressing their unease at the recent turn of events in India. A group of Indian students from more than 20 British universities, members of the National Indian Students and Alumni Union, who had sent a letter to Modi a week ago demanding action in the recent rape cases of Kathua and Unnao, found out just hours before that they were denied tickets to Modi’s town hall-style meeting on Wednesday evening. They are now talking about their voices being “silenced”.

The rape issue and Modi government’s perceived failure on many fronts – social, economic and political – seems to have divided Indian Ladies in the UK as well. Although its chief co-ordinator, journalist Poonam Joshi, spearheaded the welcome Modi campaign once again, this time headlined under “Woman ki baat”, she posted a 20-minute video on the organisation’s Facebook page defending her decision. As she railed against the hypocrisy of Indian women in the UK who she claimed were shedding tears for a distant Kashmiri girl while ignoring the violence Indian women faced in the UK, others were using the Facebook platform to organise a silent protest against Modi’s unsatisfactory response to the Kathua and Unnao rapes. A letter in the Guardian signed by over 50 women’s groups’ representatives and academics appeared on Wednesday morning, casting a shadow on Modi’s claims of safeguarding women in India. 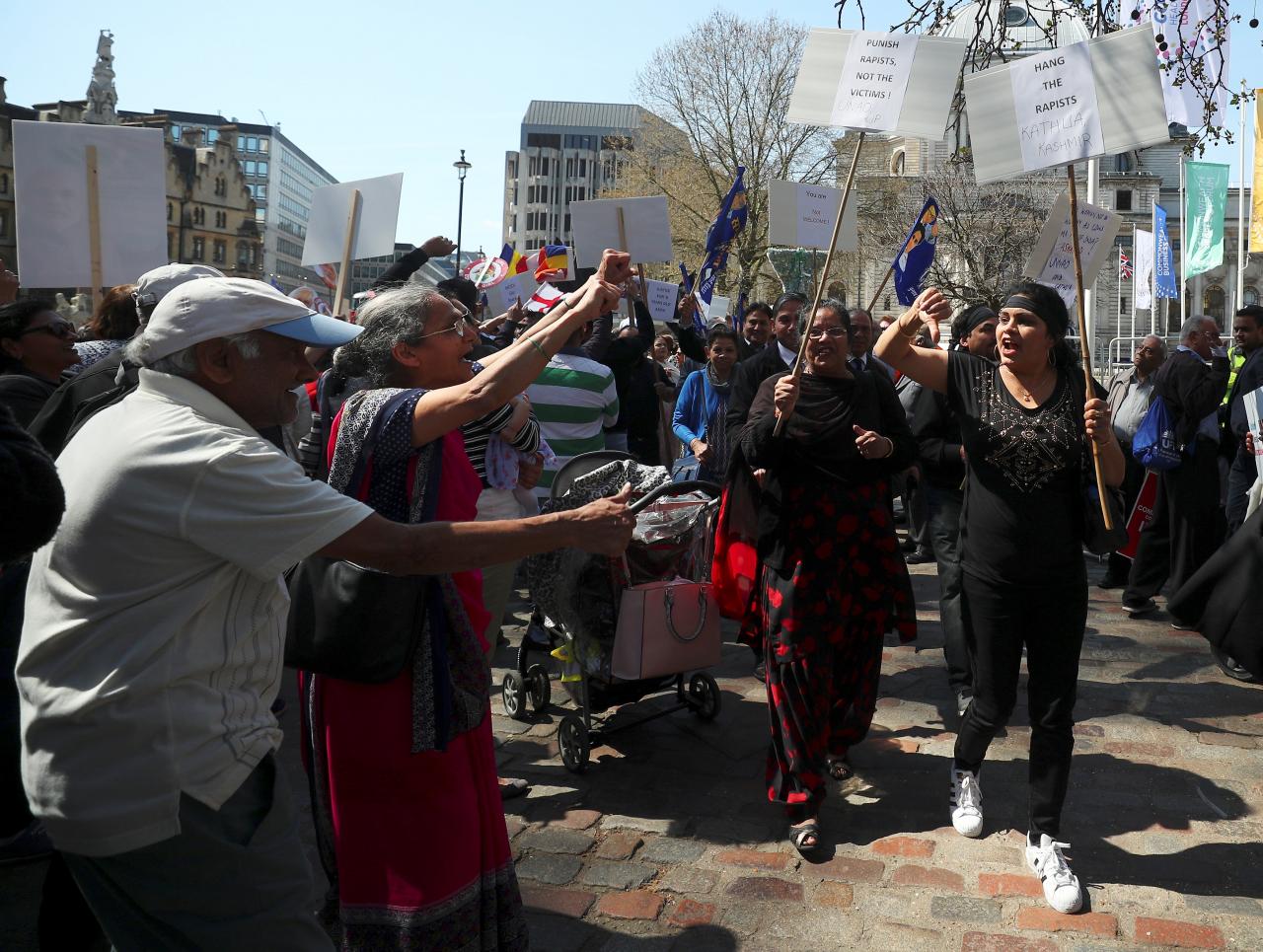 Expectedly, of course, there were the several hundred diaspora Indians, overwhelmingly of Gujarati origin, who were present as part of the committed ranks of Hindutva organisations in the UK, to welcome Modi and to celebrate his politics. The heavily bejewelled women from groups such as Enfield Saheli and the flashmob dancers of Indian Ladies in the UK, as well as those carrying banners of ‘Vande Mataram’ and ‘Modi for Man of Developing India’ are clearly part of Modi’s hardcore support.

But as the main square across from Parliament was populated plentifully by those protesting Modi’s visit – students, activists, members of South Asia Solidarity Group, the Southall Black Sisters, Castewatch UK, the Indian Workers Association, as well as by Khalistani and Azad Kashmir groups – one wondered if the bhakts could have entirely escaped experiencing the growing anger against promises eviscerated, the loss of face in international media, and an increasingly polarised public sphere in India and among its diaspora.

As Kalpana Wilson of the South Asia Solidarity Group, one of the leading organisers of the protests on April 18, said, it really was about fighting against the exclusionary idea of India that Modi and his political party represents. Indeed, the challenge of division and communal patriarchal mobilisation against a more inclusive and progressive idea of India is as real among the diaspora as it is in India.

Of course, when the 1,500 carefully selected and vetted guests filed into Westminster’s iconic central hall for Modi’s ‘Bharat ki Baat: Sabke Saath’ event, it was clear that he would have to face not even a mildly critical question.

Set up as a town hall meeting, the master of ceremonies was the former adman and Bollywood lyricist Prasoon Joshi, who now heads the Indian censor board. He presided over a surreal mix of propaganda graphics showcasing the clichéd images of India’s architectural monuments and its space programme mixed in with promotional “Make in India” images underscoring the rapid progress India has made under Modi.

Joshi interspersed these images with poetic and philosophical reflections that provided Modi with an oratorical register in which divisive and critical political issues could be transmuted into an opportunity for self-aggrandisement. It was fanboy Joshi face-to-face with the fakir Modi, the self-made, selfless national leader without any material desires, fuelled by physical discipline and a rigorous work ethic.

Modi exulted in what he loves to do – speak of himself in the third person, as a philosopher-politician who was there to uplift India from the depths it had sunk to in the post-independence era. The alchemy between Joshi and Modi, interspersed with carefully curated questions from the audience, presented a veritable theatre of the absurd. For without a trace of irony, the opening voiceover had pronounced “Garibi ka saaya hat raha hai (The spectre of poverty is receding)”, only to be followed by the chilling declaration “Betiyon ke saath (desh) khada hone laga hai (The country is beginning to stand up for its daughters)”.

This clearly was no rockstar Wembley moment. Although Modi’s performance was periodically greeted with applause, there seemed to be plenty of bored faces in the audience who had come there for a repeat performance. Modi’s magic seems to have waned, even if just a little, even if also in the diaspora.

Rashmi Varma teaches in the Department of English and Comparative Literary Studies at the University of Warwick. She is a member of Awaaz-South Asia Watch and part of the editorial collective of the journal Feminist Dissent.