What the Age of Narendra Modi Means for Indian Foreign Policy

Scholars and analysts of international relations need to be vigilant about the fact that a break with the existing consensus is almost inevitable. 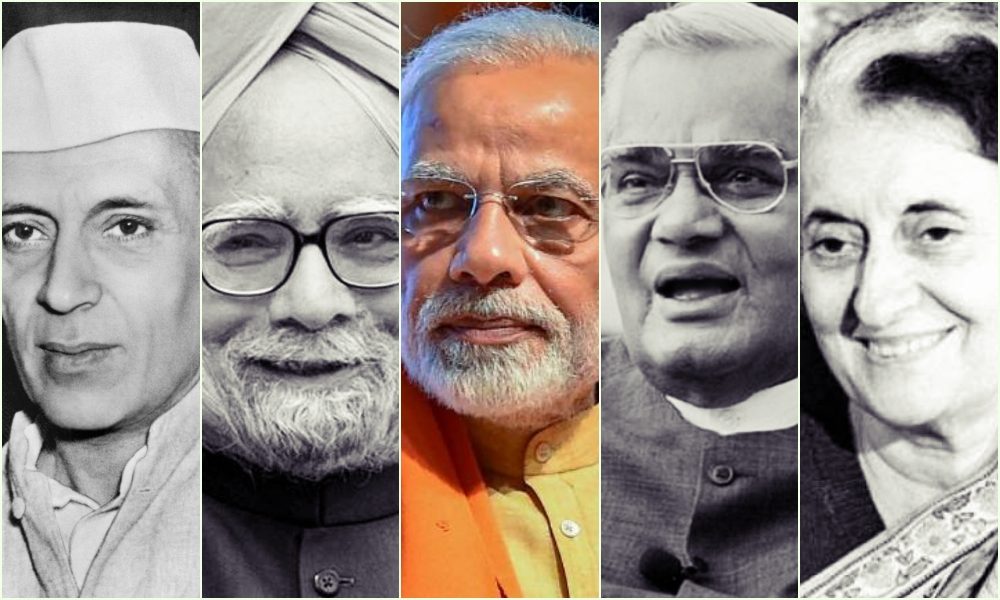 After the election, it is no longer heretic to question the long-held view in New Delhi that India stands to benefit from constructive engagement with the existing international order. From left to right: Jawaharlal Nehru, Manmohan Singh, Narendra Modi, Atal Bihari Vajpayee and Indira Gandhi. Photos: Wikimedia/PTI

Even as the practice of Indian diplomacy continues apace, Narendra Modi’s return to power as prime minister must prompt students of international relations to interrogate their own assumptions about India and its place in the world. It is no longer possible to ascribe epistemic meaning to terms that are commonly associated with the analysis of Indian foreign policy – the “national interest”, “international community” or “autonomy”, for that matter.

This is so for two reasons.

First, any electoral triumph empowers with it political and intellectual narratives about the country’s future, and disenfranchises others. Modi’s victory will energise several constituencies, many of whom do not necessary converge on their views.

The Sangh parivar and its fellow travellers will see the 2019 results as a vindication of their quest for a Hindu homeland, whether it is in concert with like-minded regimes in India’s “natural frontiers” such as Nepal, or by amending what the Rashtriya Swayamsevak Sangh considers the constitution’s original sin: the conferring of citizenship on the basis of territory. Modi, now firmly in power and conscious of the limits of such an endeavour, will probably not pander too much to this constituency.

His victory will also give a fillip to elites in India’s political and financial capitals who have thus far felt sidelined by a consensus that privileged the state as the Indian economy’s primary actor. This constituency is thanking its stars that the NYAY proposal, with its burdensome ask from the exchequer, dissipated along with the chances of a Congress victory.

Finally, Modi’s triumph will also stir the Bharatiya Janata Party to decimate, or abandon through benign neglect, the political legacy of the Nehru-Gandhi family, which they feel will do more to harm to the Indian National Congress than the stepping down of Sonia or Rahul Gandhi from active public life.

The success or failure with which these three constituencies bear on the prime minister will undoubtedly affect India’s international relations. And with such a diversity of actors in the mix, it is foolhardy to believe everyone wants the same from India’s foreign policy. What is clear, though, is that none of them want more of the same.

Second, the traditional view that our foreign policy is crafted to preserve room for India’s development, while it gradually stakes out a greater political role in the world, has also been challenged by these elections. To be sure, Indian diplomats will not abandon overnight the country’s economic priorities for all else. But the 17th Lok Sabha election, it is safe to say, was not fought on developmental concerns alone – Modi impressed upon the electorate the need for strong, swift and decisive leadership, and one that places a premium on national security.

The Balakot airstrikes lent fuel to that narrative, but Modi’s phenomenal victory strengthens his pitch and gives him the mandate for ‘bold’ decisions. In fact, the message from the recently concluded elections appear to be that India’s “development” can no longer be seen purely from an economic lens, but is equally an attribute of its political identity.

That is a tectonic change from all general elections conducted since the 1991 reforms, including the 2014 polls, which were fought on the economic issue of anti-corruption. Students of international relations in India will be ill-advised to ignore this change. India’s external environment will naturally affect the conduct of its diplomacy during Modi’s second term. But for students or analysts of IR, the normative baselines from which to evaluate decisions taken by New Delhi are today all but invisible. International affairs is increasingly conducted away from the gaze of treaties or institutional frameworks, and instead assigned to “adhocracies”, which are rarely examined in the canonical literature.

Counter-terrorism cooperation – a treaty for which has been a longstanding demand from India – is today the remit of UN Security Council committees and task forces, whose lack of clear operating rules New Delhi has itself protested. Climate change action through the Paris Accords has stagnated: UN Security General Antonio Guterres warned nations last week that they were “not on track” to meet its goals, thanks in part to the lack of political will from the major advanced economies.

There also appears to be very little appetite for frontier issues of global governance to be managed through negotiated rules. The United States has made it clear it continues to oppose the creation of a treaty to govern cyberspace. China has reportedly been reneging on its legally binding commitment to ban ozone-depleting substances, diminishing the Montreal Protocol’s claim as the “most effective treaty in the world”. It appears highly unlikely that the United States, Russia and China will come together to craft a regime for the governance of the Arctic, interested as each is in the economic possibilities that open up after its ice melts. The WTO has struggled in recent months to incubate negotiations on global e-commerce rules, and localised rules for national and regional digital economies look set to become the norm.

Also read: India’s Focus Shift From SAARC to BIMSTEC Is Strategic, but Underused

If the current churn in global affairs is characterised by the lack of multilateral cooperation, it is not solely on account of political tensions between the major powers. By that account, the Cold War should have seen no progress in regime-building, but four decades of superpower rivalry were surprisingly fertile for the growth of international law, especially of legal frameworks for the governance of the commons.

The international order today is in a state of stagnation because it has no creator, preserver or destroyer. The United States under Donald Trump has made it amply clear it prefers mercantilism over liberal institutionalist frameworks that rely on comparative advantages. For their part, the Chinese have shown no interest in dismantling the existing system. The Leaders’ Communique from the 2nd Belt and Road Forum in April declared China and its partners “aspire to further open our markets, reject protectionism, unilateralism and other measures that are incompatible with WTO rules.”

Beijing has been caught completely off-guard by the scale and intensity of Trump’s trade war against it, and has attempted weakly to “mimic” 20th century regime-building by the United States. As for the preserver – India – it is contemplating whether to further invest in 20th century institutions, or to channel its energies in bilateral relationships where results materialise faster and through lesser expenditure of resources.

It is inconceivable, for instance, that India will today spend the kind of diplomatic firepower it once did to secure the NSG waiver in the fall of 2008. The waiver was as much about India’s entry and acceptance into an elite club of interlocutors within the international system, as it was about nuclear commerce with the US and other countries. Ten years later, with New Delhi embedded more than ever in multilateral and plurilateral regimes, and elite coalitions such as the G7, G20 or APEC teetering aimlessly, it feels little need to help underwrite the management of global regimes, with or without the US.

In short, it is no longer heretic to question the long-held view in New Delhi that India stands to benefit from constructive engagement with the existing international order.

In fact, the 2019 Lok Sabha elections make such questioning likely and imminent from within government. Modi’s team will interpret his victory not simply as a call for effective leadership, but also a clean break from the past. Recall how the Nehru-Gandhis frequently and critically surfaced during the BJP’s electioneering: their legacy over the state’s ideological and political vision is at the very top of Modi’s transformative plans for India.

Indian foreign policy is a legatee of that vision, and Modi will use his powerful office to change it. His decision to skip the Non-Aligned Meeting in 2016, and to will the “Indo-Pacific” as a geopolitical construct into existence are all attempts at this disruption. What aids his cause is the dysfunction, described above, that has crept into the international system. The world is not quite at the same crossroads today as it was at the end of the second world war.

In an earlier essay for The Wire, I argued that the political, social and economic values that India aspires to still largely resemble those at the time of her birth. But the recently concluded elections cast a big shadow over that assumption. Due to a curious mix of circumstance and design, Modi will come closest to the levers Jawaharlal Nehru could pull to singularly chart the future of India’s external engagement. Modi has seized that opportunity by remaining in power for another five years – as a one-term prime minister, he would likely have remained an aberration – as opposed to Nehru, who enjoyed a free hand right from his first term.

Students, scholars and observers of international relations in India are therefore confronted with the possibility of a fundamental shift in the intellectual and ideological moorings around which the country’s foreign policy has hitherto been conducted. Members of the commentariat may have their own views, favourable or negative, of this shift; what is important is that the academy too senses and responds with agility to it through sustained and rigorous scholarship.

India’s foreign policy decisions can no longer be refracted through the prism of concepts – or at least their commonly understood meanings – crafted for an external and domestic environment that no longer exists. Nor can the academy stay away from the practice of diplomacy, treating it as characteristic of the government of the day. The US policy of “containment” during the Cold War emerged from an article written (anonymously) by George F. Kennan, then a career diplomat in the Department of State. In various avatars, “containment” became a touchstone of Washington’s engagement with the world, and was uncritically absorbed into the American academy’s lexicon.

It would not be until more than a decade after Kennan’s essay that a US president himself would warn of the dangers of a “military-industrial” complex, brought about by the perception of fear and insecurity. But the Rubicon had already been crossed – militarism became an intrinsic tool to respond to crises America faced, and was made legitimate by the pens and words of the American cognoscenti.

India is at one such crucial juncture, and needs its researchers and students – of all political persuasions – to be vigilant, and stand toe-to-toe with the government’s brain trusts.

Arun Mohan Sukumar works at the Observer Research Foundation, and is a doctoral candidate at the Fletcher School, Tufts University.