PM Modi at G20: 'Need to Find Way to Return to Path of Ceasefire, Diplomacy in Ukraine'

Modi's call for not putting any restrictions on energy supplies came amid the West's call against procurement of Russian oil and gas in view of Moscow's invasion of Ukraine. 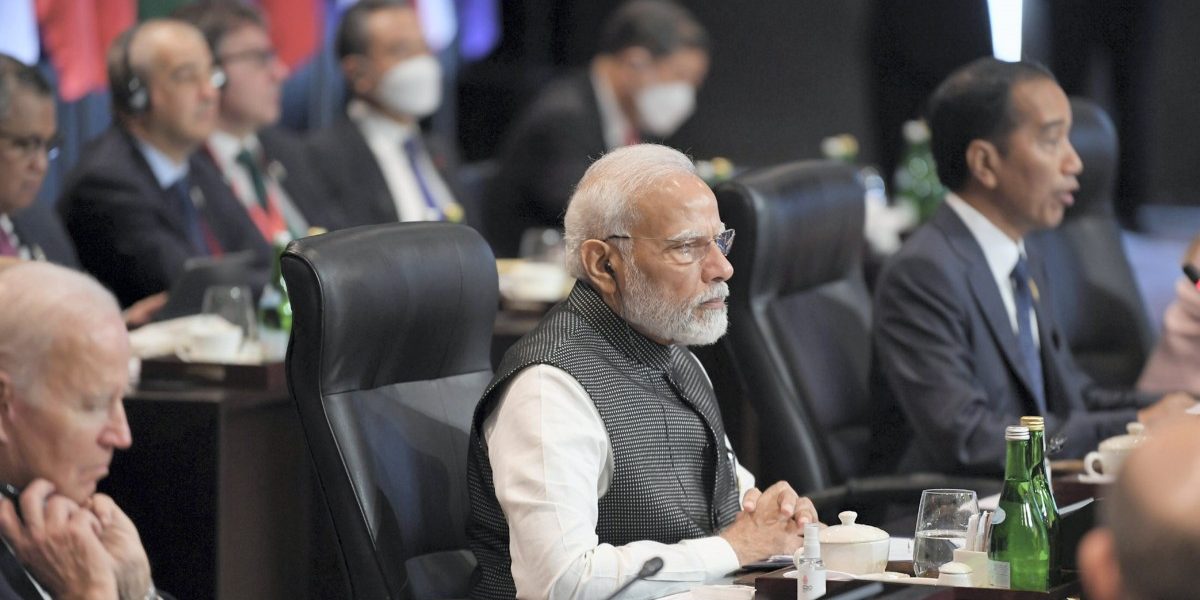 New Delhi: Prime Minister Narendra Modi on Tuesday, November 15, underlined the need for not promoting any restrictions on the supply of energy and called for ensuring stability while once again emphasising on resolving the Ukraine conflict through diplomacy.

In an address at the G-20 summit at Bali in Indonesia, Modi said that climate change, the COVID-19 pandemic, the developments in Ukraine and the global problems associated with it have caused havoc in the world as the global supply chains are in “ruins”.

The prime minister’s call for not putting any restrictions on energy supplies came amid the West’s call against procurement of Russian oil and gas in view of Moscow’s invasion of Ukraine.

“India’s energy-security is also important for global growth, as it is the world’s fastest-growing economy. We must not promote any restrictions on the supply of energy and stability in the energy market should be ensured,” Modi said at the session on food and energy security, also attended by world leaders like US President Joe Biden and Russian foreign minister Sergey Lavrov on behalf of President Vladimir Putin.

The role of Russian oil in affecting India’s global reputation has figured prominently this year since Russia attacked Ukraine. India has argued that the purchase of Russian crude should not be “politicised”, especially when Europe too is dependent on the same source for energy. The US is among countries which don’t look kindly at India’s insistence on purchasing Russian oil.

Recently in India, US Treasury Secretary Janet Yellen had said, “[F]or the better part of this year, Putin has weaponized Russia’s natural gas supply against the people of Europe.”

On the Ukraine conflict, he referred to his repeated call for resolving the crisis through talks.

“I have repeatedly said that we have to find a way to return to the path of ceasefire and diplomacy in Ukraine. Over the past century, the Second World War wreaked havoc in the world,” he said.

Modi’s words came a day after India on November 14, abstained on a draft resolution approved by the UN General Assembly that recognised that Russia must be responsible for making reparations to Ukraine.

“After that, the leaders of that time made a serious effort to take the path of peace. Now it’s our turn. The onus of creating a new world order for the post-Covid period lies on our shoulders,” he noted.

The prime minister said the need of the hour is to show “concrete and collective resolve” to ensure peace, harmony and security in the world.

“I am confident that next year when the G20 meets in the holy land of Buddha and Gandhi, we will all agree to convey a strong message of peace to the world,” he said.

Modi also said that India is committed to clean energy and the environment.

“By 2030, half of our electricity will be generated from renewable sources. Time-bound and affordable finance and sustainable supply of technology to developing countries is essential for inclusive energy transition,” he added at the summit being held in this Indonesian city.

The prime minister also complimented Indonesia for its leadership of G20 in a challenging global environment.

“Climate change, the Covid pandemic, the developments in Ukraine, and the global problems associated with it. All these together have caused havoc in the world. Global supply chains are in ruins,” Modi said.

“There is a crisis of essentials, essential goods all over the world. The challenge for the poor citizens of every country is more severe. Everyday life was already a struggle for them,” he said.

“Due to the double whammy, they lack the financial capacity to handle it. We should also not hesitate to acknowledge that multilateral institutions such as the UN have been unsuccessful on these issues,” he said.

“And we have all failed to make suitable reforms in them. Therefore, today the world has greater expectations from the G-20, the relevance of our group has become more significant,” he added.