PM Modi, Host of World Leaders Call for Peaceful Transition of Power in the US

Many world leaders expressed shock at the violent attempt by Donald Trump supporters to force Congress to block the appointment of president-elect Joe Biden. 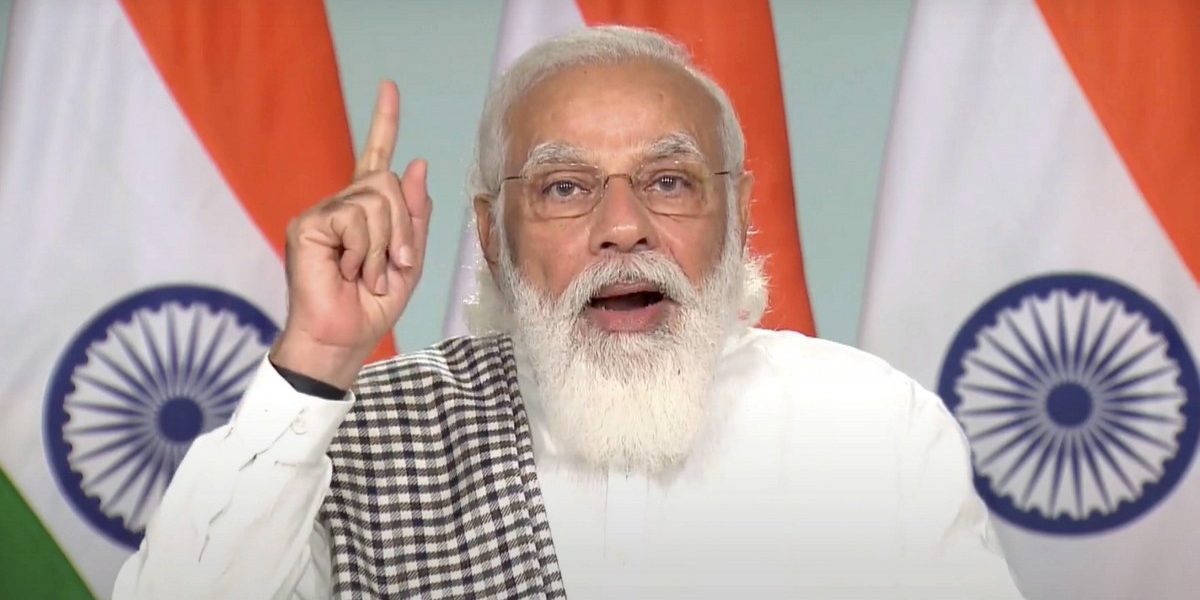 New Delhi: Indian Prime Minister Narendra Modi was among a slew of world leaders who called for a peaceful transition of power in the US, after a mob of supporters, many armed, of President Donald Trump stormed the Capitol where Congress was going to certify his successor’s electoral college victory.

“Distressed to see news about rioting and violence in Washington DC. Orderly and peaceful transfer of power must continue. The democratic process cannot be allowed to be subverted through unlawful protests,” tweeted Modi early Thursday morning.

This has been an unprecedented development in world politics, where the US and the West have usually been the countries to advocate for a peaceful transfer of power.

US secretary of state Mike Pompeo said the storming was”unacceptable”. “Lawlessness and rioting — here or around the world — is always unacceptable,” he said. He said the “criminals who engaged in this rioting” should be brought swiftly to justice.

America is better than what we saw today at a place where I served as a member of Congress and saw firsthand democracy at its best.

The chair of the US House Foreign Affairs Committee, Gregory Meeks stated that the “attempted coup” by Trump’s supporters was being watched by the entire world. “Our ability to advocate for democracy around the world will be significantly hurt after this tragic day in America,” he tweeted.

The world is watching as the greatest democracy braces against an attempted coup, stirred by its leader who’d rather watch the country burn than transition power.

Our ability to advocate for democracy around the world will be significantly hurt after this tragic day in America.

Along with the ranking Republican member of the committee, Meek released a joint letter in which they said the US has been a model of “free and fair elections”, adding that the violence in the Capitol building had “scarred our reputation and has damaged our standing in the world”.

“Today’s violence – an inevitable result when leaders in positions of power misled the public – will certainly empower dictators and damage struggling democracies. The people perpetrating the violent insurrection of the Capitol today should be arrested and prosecuted in accordance with the law. We must send a message to the world that this is not acceptable, and that America continues to stand for the rule of law,” the letter said.

Calling for a peaceful transition of power, the two lawmakers wrote, “The world is watching.” 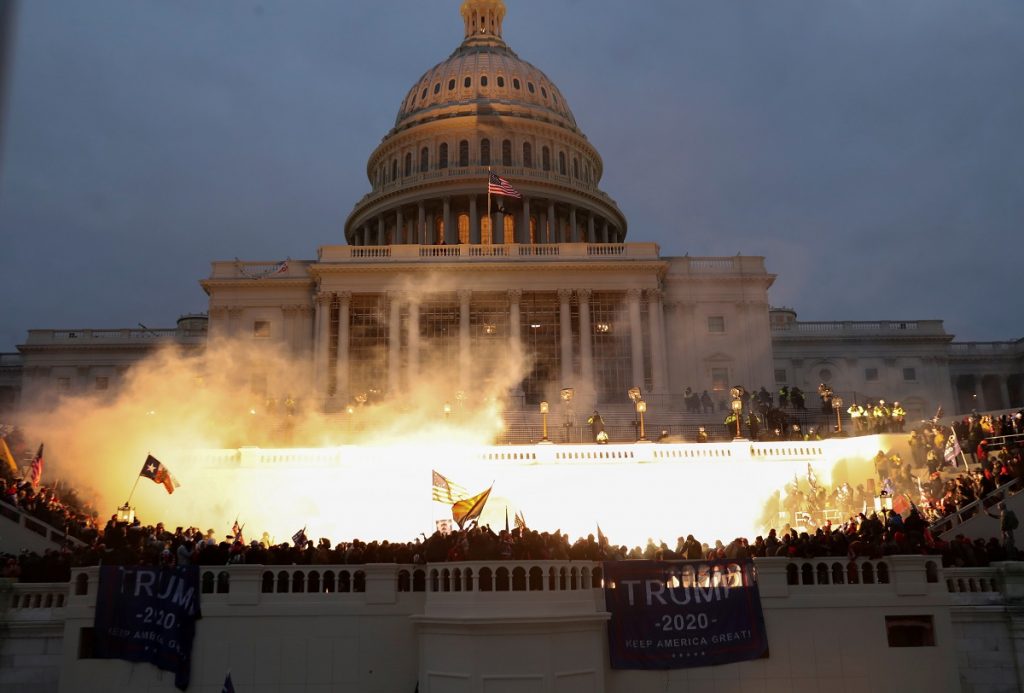 The world has, indeed, been watching in horror, with US allies and partners mincing no word to express their worry as the disturbing visuals of armed mob putting the US seat of government under lockdown flooded around the world.

Canadian Prime Minister Justin Trudeau asserted that violence “should never succeed in overruling the will of the people”. He said, “Democracy in the US must be upheld – and it will be”.

Canadians are deeply disturbed and saddened by the attack on democracy in the United States, our closest ally and neighbour. Violence will never succeed in overruling the will of the people. Democracy in the US must be upheld – and it will be.

NATO secretary general Jens Stoltenberg was among the first to react with shock.

Shocking scenes in Washington, D.C. The outcome of this democratic election must be respected.

The storming also gave an opportunity for detractors of the US, like Turkey, Venezuela and China, to indulge in a taste of rhetoric of the kind that they are usually at the receiving end from Washington DC.

Turkey concerned over developments in US, urges calm and lawful solution to problems, says parliament head

Official communiqué – “Venezuela expresses concern about the acts of violence taking place in Washington; condemns the political polarization in that country, and hopes that the people of the US. can find a new path to stability and social justice” https://t.co/8bB0ybFlfa

.@SpeakerPelosi once referred to the Hong Kong riots as “a beautiful sight to behold” — it remains yet to be seen whether she will say the same about the recent developments in Capitol Hill. pic.twitter.com/91iXDzYpcO

Meanwhile, Russian foreign ministry spokesman Maria Zakharova shared another person’s Facebook post to make her opinion of the storming clear. She shared a post from Jill Dougherty, a Russia expert at the Woodrow Wilson International Center for Scholars in Washington, which said, “The United States will never again be able to tell the world that we are the paragon of democracy.”

In his speech on national television, Iranian president Hassan Rouhani stated that the events in Washington showed “how fragile and vulnerable Western democracy is”.

Describing Trump as a “populist” who led “his country to disaster”, Rouhani hoped that the “whole world and the next occupants of the White House will learn from it”

“May they return to reason, legality and their obligations. It’s for their own benefit and the good of the world,” he said.

Referring to Trump as the “rogue president, Iranian foreign minister Javad Zarif raised concerns that the US leader had “unchecked authority” to start a nuclear war.

A rogue president who sought vengeance against his OWN people has been doing much worse to our people—and others—in the past 4 years.

What's disturbing is that the same man has the UNCHECKED authority to start a nuclear war; a security concern for the entire int'l community.

During the daily briefing, Chinese foreign ministry spokesperson Hua Chunying stated, “We believe that the American people still cherish peace and safety, especially when they are still struggling with a difficult pandemic situation. We hope that they will have their peace, stability and safety back as soon as possible.”

We hope the #American people could regain their #peace, stability & #safety ASAP. pic.twitter.com/DezCkbae8V

However, she claimed that United States was showing double standards by criticising the police violence in Hong Kong protestors.

“If you still remember how some US officials, lawmakers and media described what’s happened in Hong Kong, you can compare that with the words they’ve used to describe the scenes in Capitol Hill. I made a note of some words they used. They all condemned it as “a violent incident” and the people involved as “rioters”, “extremists” and “thugs” who brought “disgrace”. Now compare that with what the Hong Kong violent protesters were called, like “a beautiful sight” you brought up and “democratic heroes”. They said that “American people stand with them,” she added.

Zimbabwe’s President Emmerson Dambudzo Mnangagwa asserted that the storming of the Capitol showed that the US had “no moral right to punish another nation under the guise of upholding democracy”. However, he also put out an olive branch towards president-elect Biden.

“Zimbabwe is, as it always has been, ready to work together as friends and partners with the US for the benefit of both our peoples,” he added.

Yesterday’s events showed that the U.S. has no moral right to punish another nation under the guise of upholding democracy. These sanctions must end.

The Organisation of American States, the regional body of 35 member states, asserted that the “exercise of force and vandalism against the institutions constitutes a serious attack against democratic functioning.

Across the Atlantic, the US’s closest ally, UK Prime Minister Boris Johnson described the storming of the Congress as “disgraceful”. “The United States stands for democracy around the world and it is now vital that there should be a peaceful and orderly transfer of power,” he added.

Disgraceful scenes in U.S. Congress. The United States stands for democracy around the world and it is now vital that there should be a peaceful and orderly transfer of power.

The French president, Emmanuel Macron, stood in front of French and US flags, to state that what happened in Washington on Wednesday was “not America”. He also expressed belief in the “strength of American democracy”.

After US Congress certified Biden’s electoral victory, German chancellor Angela Merkel stated that the “pictures made her angry and sad”.

“I deeply regret that since November, President Trump has not accepted that he lost, and did not do so again yesterday… He stoked uncertainties about the election outcome, and that created an atmosphere that made the events of last night possible,” she stated at an online meeting of her party’s allies.

In strong terms, German foreign minister Heiko Maas said that US President Donald Trump and his supporters “should finally accept the decision of the American voters and stop trampling democracy”.

He asserted that “enemies of democracy” would find the images from Washington very encouraging. “The disdain for democratic institutions is devastating”.

The Australian Prime Minister Scott Morrison, another close ally of the US, condemned the “acts of violence and look forward to a peaceful transfer of Government to the newly elected administration in the great American democratic tradition”.

Very distressing scenes at the US Congress. We condemn these acts of violence and look forward to a peaceful transfer of Government to the newly elected administration in the great American democratic tradition.

Japan, another treaty ally of US and a ‘Quad’ member, stated that Tokyo was concerned and closely monitoring the storming of the US Capitol by Trump supporters.

“We are hoping for a peaceful transfer of power” in the United States, chief cabinet secretary Katsunobu Kato told reporters.

European Union president Ursula von der Leyen noted that peaceful transition of power was at the core of democracy. “Joe Biden won the election. I look forward to working with him as the next President of the USA,” she tweeted.

I believe in the strength of US institutions and democracy. Peaceful transition of power is at the core. @JoeBiden won the election.

I look forward to working with him as the next President of the USA. https://t.co/2G1sUeRH4U

The head of EU foreign affairs Josep Borrell Fontelles also commended the words of president-elect Biden. “This is an unseen assault on US democracy, its institutions and the rule of law,” he said.

I commend the words of President-elect @JoeBiden. The strength of US democracy will prevail over extremist individuals.