As Modi Arrives in Israel, Promises of Economic and Security Cooperation

Narendra Modi is the first Indian prime minister to visit Israel since diplomatic ties were established. 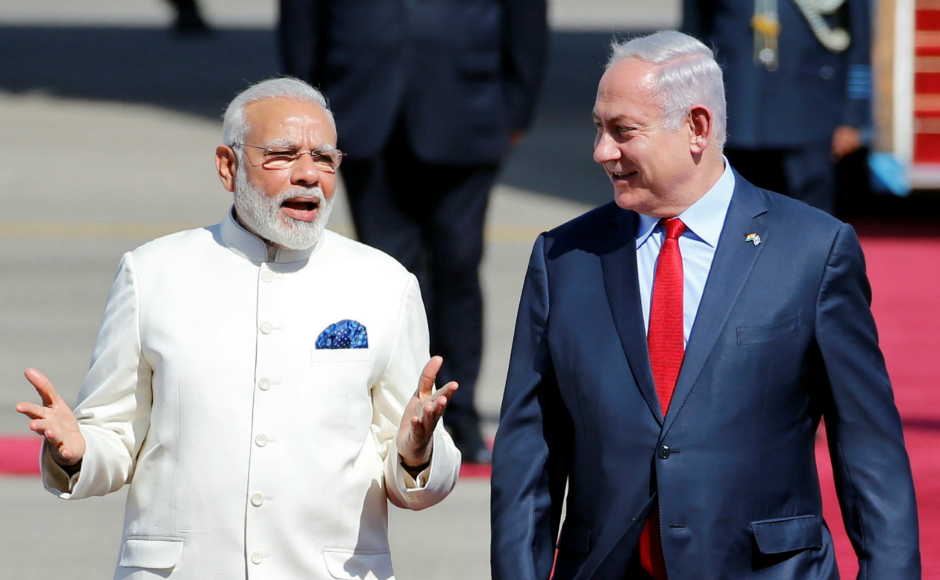 New Delhi: Narendra Modi became the first Indian prime minister to visit Israel since diplomatic ties were established 25 years ago, with both sides emphasising the need to take steps for a stronger economic and security relationship.

Modi was greeted at the Tel Aviv’s Ben Gurion airport by Israeli Prime Minister Benjamin Netanyahu on Tuesday afternoon, who told him that Israel has “been waiting almost 70 years” for this visit. Making a sartorial statement, Modi was wearing a white safari suit, with a blue handkerchief peeking from the pocket – the colours of the Israeli flag.

Prime Minister P.V. Narasimha Rao had formally established diplomatic ties with Israel in 1992 – after getting a green light from Palestine Liberation Organization leader Yaseer Arafat. But no Indian prime minister had visited Israel until now, although Israeli Prime Minister Ariel Sharon had visited India in 2003.

My friend Indian Prime Minister @narendramodi, we have been waiting for you for a long time. Welcome to Israel! pic.twitter.com/crnpi33OMs

In an effusive welcome ceremony at the tarmac, Netanyanhu was accompanied by his cabinet members and religious leaders, including heads of the Bahai and Ahmaddiya Muslim community in Israel.  .

"We are very close to Ahmadiyya" says ??Indian PM @narendramodi as he is welcomed to ??Israel by PM @netanyahu along with Head of #Ahmadiyya pic.twitter.com/i2wr244s1O

The Israeli prime minister announced that Modi’s ‘Make in India’ initiative was now being supplemented by his “Make with India” policy, adding that a $40 million innovation fund was being set up to “seed” greater cooperation in technology.

“I believe the formula for success is simple: it’s I2 T2. That equals – Indian talent times Israeli technology. It equals Israel-India’s ties for tomorrow. I2 T2. This is the degree of mathematics I remember from my student days,” Netanyahu said.

After the formal talks on Wednesday, substantive agreements on water and agriculture are expected to be signed.

Modi also emphasised that along with “economic prosperity,” both countries were also “cooperating to secure our societies against common threats such as terrorism”.

This twinning between economy and security cooperation was again underlined by Modi before dinner with Netanyahu and his wife at their residence on Tuesday night.

“Over coming decades, we want to frame a relationship that transforms the landscape of our economic engagement,” he said. Modi also added that both countries wanted to “put in place a robust security partnership to respond to shared threats to our peace, stability and prosperity”.

Modi’s visit to Israel came three years after he was elected to office – despite expectations of an early trip given the BJP’s visible affiliation towards Tel Aviv. However, the Indian prime minister first travelled to important Arab states and Iran in 2015 and 2016.

Senior Israeli officials emphasised that Modi’s visit was a de-hyphenation of Israel since he would not visit Palestine, as was the tradition of visiting Indian ministers and the president in 2016. Israel certainly believes that the return of the National Democratic Alliance has led to the ‘veil’ being removed from the relationship. Israeli officials also point to a change on India’s position on Israel-related resolutions in the UN.

Indian officials argue this visit had to be stand-alone as it was specifically to mark 25 years of diplomatic relations and also refer to the red-carpet protocol to Palestine President Mahmoud Abbas for his official visit to Delhi earlier this year.

Ahead of his visit, Modi gave an interview to a Hebrew-language newspaper Israel Hayom and asserted that India believed in “a two-state solution in which both Israel and a future Palestinian state coexist peacefully”. Asked if India will move its embassy from Tel Aviv to Jerusalem, Modi added, “We will take a decision on that after both sides have come to an agreement on Jerusalem”.

With Modi finally in Israel, both leaders were keen to bring in the personal touch. Netanyahu and Modi greeted each other with phrases in Hindi and Hebrew respectively. Modi condoled that July 4 marked the death anniversary of Netanyahu’s elder brother, who died in Operation Entebbe to rescue hostages from a hijacked Air France plane in 1976.

Describing themselves as “tireless reformers,” Netanyahu also referred to Modi’s missionary zeal on yoga to make a point of both counties being “sister democracies”.

“He said to me: you can start at a low level, choose your level. So I’m starting at a low level and here’s what we’re going to do. When I do a relaxing Tadasana pose, in the morning I’ll turn my head to the right, India is the first democracy that I’ll see. And when Prime Minister Modi does a relaxing pose of Vasisthasana and he turns his head to the left, Israel is the first democracy that you can see,” Netanyahu said.

Earlier, PM @narendramodi was received by PM Netanyahu and his spouse Sara Netanyahu before the start of private dinner pic.twitter.com/PXSxyY9NEe

Netanyahu took Modi to the grave of Theodor Herzl, an Austro-Hungarian activist who formed the World Zionist Organisation and is considered the father of state of Israel. He died in 1904, but a year after Israel was born in 1948, his remains were brought to Jerusalem.

I proposed to PM @narendramodi that we visit the grave of the visionary of our state, Theodor Herzl. He responded immediately and we went. pic.twitter.com/nj16QIuOU7

The Israeli prime minister accompanied Modi to all his events after arrival in Tel Aviv, including to the Yad Vashem, Israel’s official memorial to the victims of the holocaust. Modi rekindled the eternal flame and laid a wreath.

Modi wrote in the guest book that he was “deeply moved” by the visit. “It is as much a poignant reminder of the unspeakable evil inflicted generations ago as it is a symbol of the endurance and fortitude of the Jewish people. As we deal with conflict, intolerance, hatred and terror in our time, Yad Vashem serves as a mirror to society around the world. May we not forget the injustices of the past and its devastating toll on humanity and remembering the past,” he said.

During a visit to the Danziger flower farm – to showcase Israel’s agricultural achievements, the Indian prime minister was presented with a new white “fast-growing” Chrysanthemum flower that was christened ‘Modi’.

Modi was also bearing gifts for his “good friend” Netanyahu, which highlighted the Jewish heritage of India.

He presented to Netanyahu two copper plates from Kerala, which list the charter of grant of hereditary royal privileges to a Jewish leader, as well as the first record of Jewish trade in India.

The first set of copper plates is a cherished relic for the Cochini Jews in India. pic.twitter.com/ZcR2AmICyW

The second set of copper plates is believed to be the earliest documentation of the history of Jewish trade with India. pic.twitter.com/GmWGQPHp1M

Earlier, he said “links between our peoples goes back thousands of years when the first Jews landed on India’s southwestern coastline”.

Besides, Modi also gifted a Torah Scroll from the Paradesi community in Kochi. The scroll had been dedicated to their community synagogue in 1568.

On Thursday, Modi has a full itinerary, which includes formal discussions between the Indian and Israeli delegations. He will also address the Indian-origin community in Israel and meet with 26/11 survivor Moshe Holtzberg. Moshe was just two years old when his parents were killed in 2008 attack on the Chabad house in Mumbai. He was rescued by his Indian nanny, Sandra Samuels, who has since been given honorary Israeli citizenship.