Pakistan a 'mother-ship', 'terrorism its favourite child' – with phrases like these, the Indian side kept reminding BRICS members of what its priority at the multilateral forum really was. 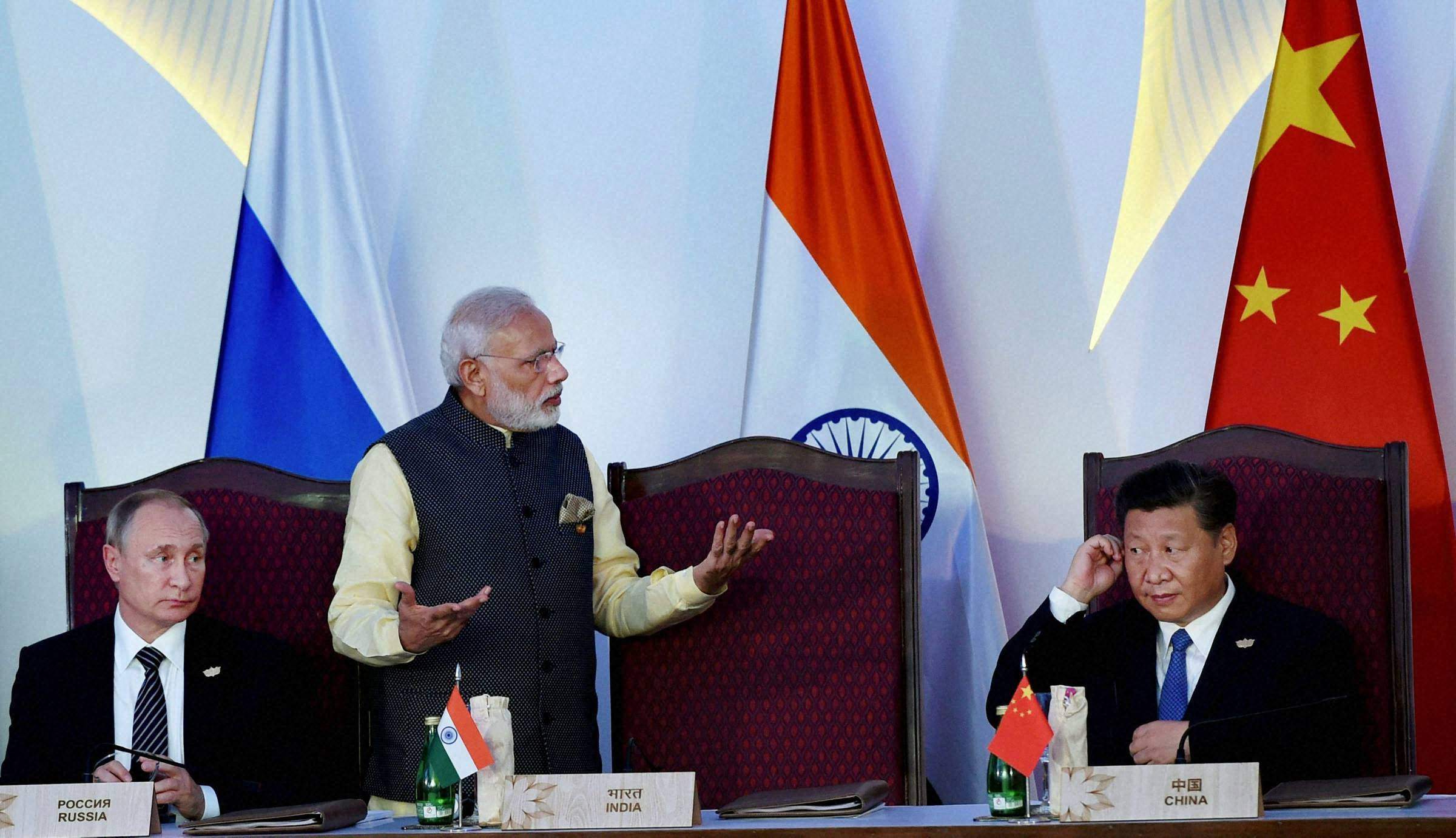 Benaulim/Cavelossim (Goa): Even as Prime Minister Narendra Modi termed combating “cross-border terrorism and its supporters” a “key BRICS priority”, there was no consensus across the five-nation bloc about specifically naming Pakistan-based terror groups, with China pointedly pushing back by talking about addressing “both symptoms and root causes”.

From the restricted off-camera session in the morning to the plenary session, Modi took every opportunity to push through the message about Pakistan – no names were taken, but the reference to India’s ‘neighbour’ could not be mistaken. From describing it as a “mothership of terrorism” – a somewhat obscure reference to the language of piracy – to claiming that BRICS had shown solidarity with India’s position that those who “nurture, shelter, support and sponsor” terrorists are also a “threat”, Modi kept on hammering the point throughout Sunday.

Not surprisingly, in their statements, the leaders of Brazil, Russia, China and South Africa used more neutral terms while talking about terrorism.

At the BRICS plenary, Russian president Vladimir Putin made no mention of terror, but later in the evening at the outreach event he did talk of the need to “collectively” fight the menace. In his press conference with Russian journalists, his focus was on ISIL in Syria, Iraq and Libya, and on India as an important market for Russian products, especially arms – and not the Pakistan-sponsored terrorism that the Indian side had laid so much public and private stress on over the past two days.

Both Brazilian President Michel Temer and South African President Jacob Zuma – whose countries have remained unscathed from international terrorism so far – talked mainly about the need for increasing intra-BRICS investment.

In pointed remarks, Chinese president Xi Jinping first included terrorism as part of  the “global challenges” which have led to a “complex and volatile external environment for BRICS countries”.  “Furthermore, we have to confront complicated geopolitical factors, intertwined traditional and non-traditional security risks and also rising global challenges such as terrorism, infectious diseases and climate change,” he said.

Xi said that BRICS should step up “coordination and communication on major international issues and regional hotspots”. The five-member bloc should speak in one voice to “find political solutions to hotspots issues and take on global challenges like natural disasters, climate change, infectious diseases and terrorism,” he said, before adding his punchline: “We should also address issues on the ground with concrete efforts and a multi-pronged approach that addresses both symptoms and root causes.”

The Chinese leader’s reference of “symptom and root causes” – a dog-whistle phrase used by Pakistan to rake up Kashmir when India talks of cross-border terrorism – was a clear indication of the gulf that still separates India from China and BRICS as a group on the issue.

Xi’s words were especially notable as he immediately followed Modi, who asserted that there should be “no distinction (in fighting terrorists) based on artificial and self-serving grounds”. Just a day earlier, Modi had raised the issue of China’s ‘technical hold’ on listing Jaish-e-Mohammed supremo Masood Azhar as a terrorist with a UN Security Council panel, to which Xi had not indicated any readiness to change Beijing’s stance.

In his interventions, Modi repeatedly raised the issue of terrorism and Pakistan, clearly marking it as India’s top foreign policy priority at not just the BRICS summit but also the BRICS-BIMSTEC outreach meeting:

The growing arc of terrorism today threatens Middle East, West Asia, Europe and South Asia. Its violent footprints put at risk the security of our citizens and undercuts our efforts aimed at economic growth. In our own region, terrorism poses a grave threat to peace, security and development. Tragically, the mother ship of terrorism is a country in India’s neighbourhood. Terror modules around the world are linked to this mother-ship. This country shelters not just terrorists. It nurtures a mind-set. A mind-set that loudly proclaims that terrorism is justified for political gains. It is a mind-set that we strongly condemn. And, against which we as BRICS need to stand and act together. BRICS must speak in one voice against this threat.”

In the world we inhabit today, security and counter-terrorism cooperation is necessary if we are to secure the lives of our citizens. Terrorism casts a long shadow on our development and economic prosperity.  Its reach is now global. It has grown more lethal and adept at the use of technology. Our response to terrorism must, therefore, be nothing less than comprehensive. And, we need to act both individually and collectively. Selective approaches to terrorist individuals and organisations will not only be futile but also counter-productive.  There must be no distinction based on artificial and self-serving grounds. Criminality should be the only basis for punitive action against the individuals and organizations responsible for carrying out terrorist acts. Terrorist funding, their weapons supply, training and political support must be systematically cut off.

Closing statement at the end of Brics Summit

We were unanimous in recognising the threat that terrorism, extremism and radicalisation presents, not just to the regional and global peace, stability and economic prosperity. But, also to our society, our way of life and humanity as a whole. We were also one in agreeing that BRICS need to work together and act decisively to combat this threat. We underscored the need for close coordination on tracking sources of terrorist financing; and targeting the hardware of terrorism, including weapons’ supplies, ammunition, equipment, and training. We also agreed that those who nurture, shelter, support and sponsor such forces of violence and terror are as much a threat to us as the terrorists themselves. India is happy to note the unity of thought and purpose on this serious global challenge.

In South Asia and BIMSTEC, all nation states, barring one, are motivated to pursue a path of peace, development and economic prosperity for its people. Unfortunately, this country in India’s neighbourhood embraces and radiates the darkness of terrorism. Terrorism has become its favourite child. And, the child in turn has come to define the fundamental character and nature of its parent. The time for condemning state-sponsored terrorism is long gone. It is time to stand up and act, and act decisively. It is, therefore, imperative for BRICS and BIMSTEC to create a comprehensive response to secure our societies against the perpetrators of terror. To those who nurture the philosophy of terror, and seek to de-humanise mankind, we must send a clear message to mend their ways or be isolated in the civilised world.

At the end of the day, Sartaj Aziz, the foreign policy adviser to the Pakistani prime minister claimed Modi was “misleading his BRICS and BIMSTEC colleagues” by terming Pakistan as the “mothership of terrorism”.

In a statement released by the Pakistani foreign office, Aziz then called on BRICS and BIMSTEC to make India accountable for “brutalities” in Kashmir and implement “relevant UNSC resolutions”.

“Pakistan joins all the members of BRICS and BIMSTEC in condemning terrorism and reaffirms its full commitment to fight the menace of terrorism without discrimination, including against the Indian state-sponsored terrorism on Pakistani soil. Pakistan’s sacrifices in the war against terrorism are well acknowledged and repeatedly appreciated by the leadership of most countries in the world,” he said. He claimed that India’s sponsorship of terror in Pakistan has been proven “irrefutably”. “Pakistan is a victim of Indian interference and subversive activities,which are aimed at destabilising Pakistan,” he added.

No ‘cross-border’ reference as BRICS settles on ‘safe’ language

The 109-paragraph-long Goa Declaration, released at the end of the Brics summit, obliquely referred to the Uri attack but did not use the ‘terrorism’ word for it: “We strongly condemn the recent several attacks, against some BRICS countries, including that in India”. It also recognised the “responsibility of all states to prevent terrorist actions from their territories” – a commitment Pakistan made to India in January 2004 but which New Delhi says has not been honoured.

However, beyond these couple of lines, other paragraphs were mostly recycled phrases which also featured in summit documents from previous years.“ We strongly condemn terrorism in all its forms and manifestations and stressed that there can be no justification whatsoever for any acts of terrorism, whether based upon ideological, religious, political, racial, ethnic or any other reasons,” said the Goa declaration.

There was no sentence in the declaration which corroborated Modi’s claim that the Goa summit had “agreed that those who nurture, shelter, support and sponsor such forces of violence and terror are as much a threat to us as the terrorists themselves.”

The document said the international comprehensive approach to fighting terror should include “dismantling terrorist bases”, and blocking the movement of terrorists including foreign terrorist fighters and financing terrorism, misuse of social media by terror.

Pushback too but India says ‘message is clear’

Admitting that India’s favourite phrase of “cross border terrorism” was not included in the document, MEA secretary (economic relations) Amar Sinha said, “It was not about individual terms. It is about concepts”.

Asked why Jaish-e-Mohammed or other Pakistan based groups were not named while ISIL and Jabhat Al-Nursra found mention, Sinha admitted, “Pakistan-based outfits are also focused [on] India in terms of their activities. Since it doesn’t attack them, (we) couldn’t get their consensus”.

The negotiation for a multilateral document, he noted, was all about compromise. “We are satisfied [with the Goa declaration]. Each one starts with their national position, which [is then] negotiated over long sessions and then [we] finally reach a conclusion acceptable to all five” he said.

He noted that negotiations started with “eight paragraphs which were merged into six”.

Asked by reporters about the absence of a reference to Pakistan, Sinha said “the message is very clear. You don’t have to spell out everything.”

“You have to look at the Goa declaration in continuation with previous declarations… the language has definitely been strengthened,” added MEA spokesperson Vikas Swarup.

When asked why the declaration did not reflect Modi’s statement that BRICS had agreed that those who supported terrorism also constituted ‘ an equal threat as terrorists’, he said, “When you are asking countries to stop terrorist bases, radicalisation, it is worded differently. PM said it as India is the injured party. The biggest victim. They perhaps put it in more neural terms. But the idea is exactly same”.

On President Xi talking of “symptoms and root causes”, Sinha said, “I don’t know what they mean by root causes… I don’t think they are linking it with (terror). If they actually believed in that, they would not endorse the CCIT”. India has been also advocating the adoption of a Comprehensive Convention on International Terrorism at the United Nations for nearly two decades, but agreement has been elusive over the definition of terrorism.

No BRICS credit ratings yet

The BRICS summit began as a forum which focussed on trade and economic matters, though political issues have been incrementally taken up in the last few years.

In Goa, there was a separate session with the BRICS business council and a briefing for leaders by the New Development Bank’s president, K.V. Kamath. Three agreements were signed to establish a platform for BRICS agriculture research, regulations for a customs cooperation committee of BRICS and an MoU between BRICS countries national development banks and BRICS’s own New Development Bank.

A proposal for creating a BRICS credit rating agency did not meet the final cut, with leaders giving more time to experts to thrash out the outline of a credible institution.

However, despite the business portfolio, the BRICS summit in Goa summit will likely be remembered for the manner in which India hammered away on the terrorism issue, with Pakistan being a constant, but absent presence.