In 'Hot Mic' Gaffe, Netanyahu Spills the Beans On Modi's View of Palestine

'India needs clean water, where will I get it? Ramallah? No', the Indian prime minister reportedly told his Israeli counterpart. 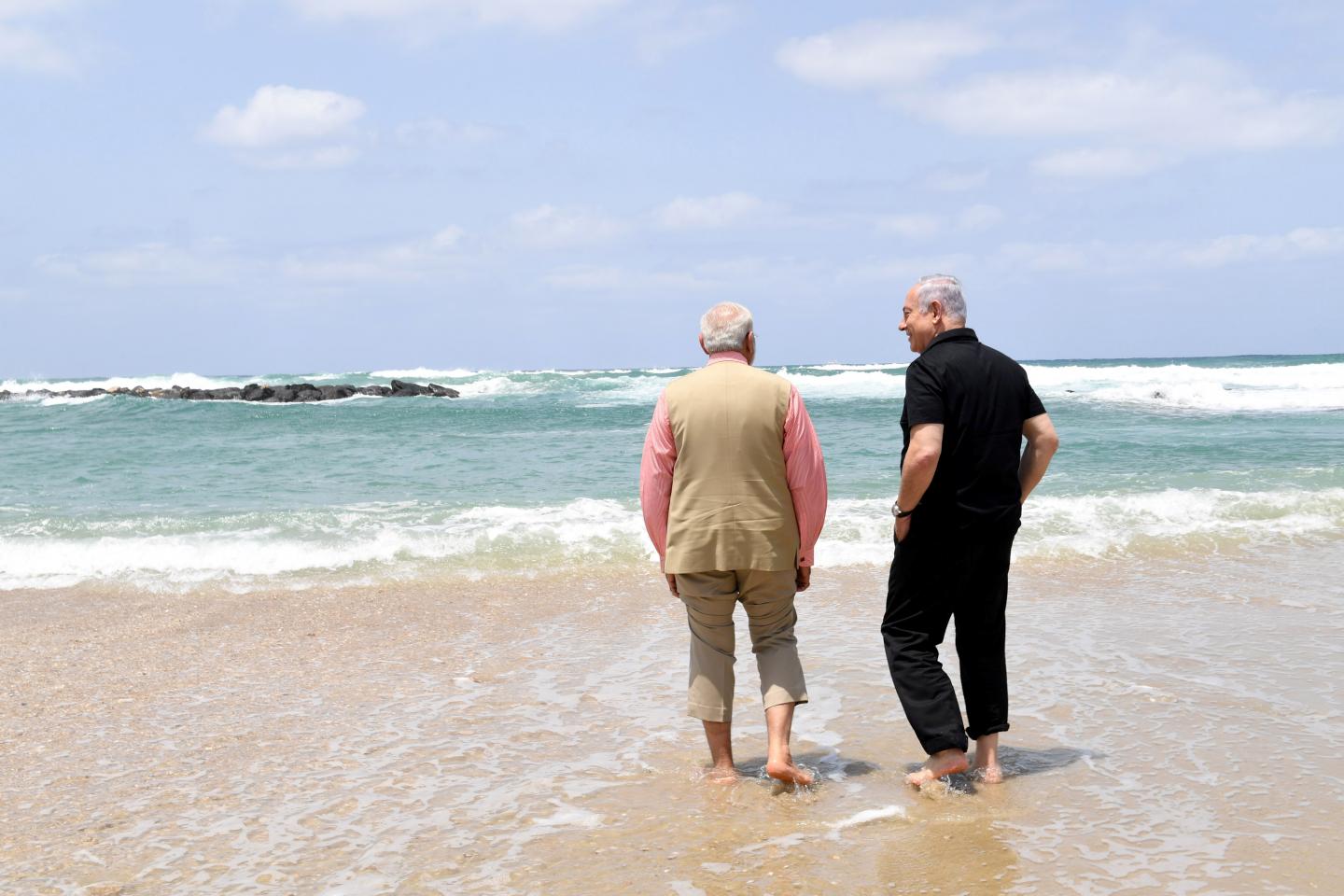 ‘India needs clean water, where will I get it? Ramallah? No’, the Indian prime minister reportedly told his Israeli counterpart.

New Delhi: We have only one man’s version of the conversation but in Benjamin Netanyahu’s (admittedly self-serving) account of the exchange, Narendra Modi apparently told the Israeli prime minister that the reason he visited Israel and not Palestine was because the latter had nothing to offer India.

India needs “clean water”, Modi supposedly told Netanyahu, and that he would not get any in ‘Ramallah’ – the Palestinian town near Jerusalem where most foreign dignitaries visiting the Jewish state also go.

Earlier this week, Netanyahu’s remarks to a closed door meeting of east European leaders in Budapest were unintentionally relayed via an open, or ‘hot’, mic to reporters via headphones. When the Israeli PM’s aides realised that there was an open line, it was shut down. The Israeli newspaper Ha’aretz uploaded edited excerpts of the audio clip lasting less than 2 minutes on its YouTube channel.

Netanyahu was sharply critical of the European Union’s policy of linking its relations with Tel Aviv to its actions as occupier of Palestinian territory but praised China and India for looking at Israel in purely transactional terms.

“The European Union is the only association of countries in the world that conditions the relations with Israel – that produces technology in every area – on political conditions. The only one!,” Netanyahu complained. Describing EU policy as “actually crazy”, he said that it was against European interest to put a stop on Israeli innovation due to its disagreements over the peace process and its policy of settling Jews in occupied Palestine.

Then he listed the countries who were partnering with Israel, starting with China. “We have a special relationship with China. And they don’t care. They don’t care about the political issues,” says the Israeli PM.

At this point, he mentions his ‘friend’ Modi, who, earlier this month, was the first Indian prime minister to visit Israel, and says: “Modi came to Israel now, spent a few days, He said ‘I have to take care of interests of India. I need more water. Clean water. Where will I get it? Ramallah? No,” according to Ha’aretz, which drew upon the full excerpts for its story.

Incidentally, during Modi’s visit, Netanyahu had said that relations between India and Israel were changing the world because “it’s a marriage really made in heaven but we’re implementing it here on Earth”. The Israeli prime minister used the same marital analogy during his visit to China in March this year.

It was not clear from Netanyahu’s remarks whether he was quoting the Indian PM running down Palestine’s ability to offer India anything or giving his own interpretation on the reason that Modi skipped Palestine during his recent visit. While this was the first visit by an Indian prime minister, previous trips by ministers and even the Indian president have always included a visit to Ramallah.

The reason given by the Indian side for Modi making a stand-alone visit to Israel was that it marked 25 years of diplomatic relations between the two countries.

Indian officials insist that India’s balancing act on the Israeli-Palestine issue continues despite this decision, specifically pointing out that the Palestine’s president, Mahmoud Abbas, had visited India in June, before Modi’s Israel visit.

Ahead of his visit, Prime Minister Modi had said in an interview to a Israeli newspaper that India still supported the two state solution to the Israel-Palestine issue. However, the final joint statement had no mention of the two-state solution – which was not surprising as the host, Netanyahu has refused to endorse that concept.

The Indian PM’s visit had a strong focus on technology cooperation, with a $40 million fund established for research in industrial development.

The two sides also agreed to establish a “strategic partnership in water and agriculture”. “This will focus on water conservation, waste-water treatment and its reuse for agriculture, desalination, water utility reforms, and the cleaning of the Ganges and other rivers using advanced water technologies,” said the joint statement of July 5.

‘Ramallah’, in other words, is precisely where Modi might have found clean water. It’s just that Israel holds the keys to the lock.