While the recent rapes of minor girls in India was the main focus of the demonstration, several also protested against the government's policies and the killings of rationalists and journalists. London: Hundreds of people gathered to protest at Parliament Square in London on April 18 as Prime Minister Narendra Modi arrived here for his three-day visit to the UK for the Commonwealth Heads of Government Meeting.

Placards reading “Modi go home” and “we stand against Modi’s agenda of hate and greed” were held up by the noisy demonstrators near Downing Street and the British parliament as Modi arrived for talks with British Prime Minister Theresa May. The horrific gangrape and killing of an eight-year-old girl in Jammu’s Kathua was the main focus of the demonstration, though a few other causes were also highlighted.

Many supporters of the prime minister came out to the streets too. There were two distinct camps – several groups that were against the Indian prime minister and the government for a variety of reasons, from demanding Khalistan to those protesting the murder of rationalists and journalists, and those protesting against the protestors. For the latter, the former groups are “anti-India” forces. For everyone who protested there were others who supported Modi. Much like in India, the NRI community found itself divided, and the fervour that greeted his visit was tempered by the anger of protestors. 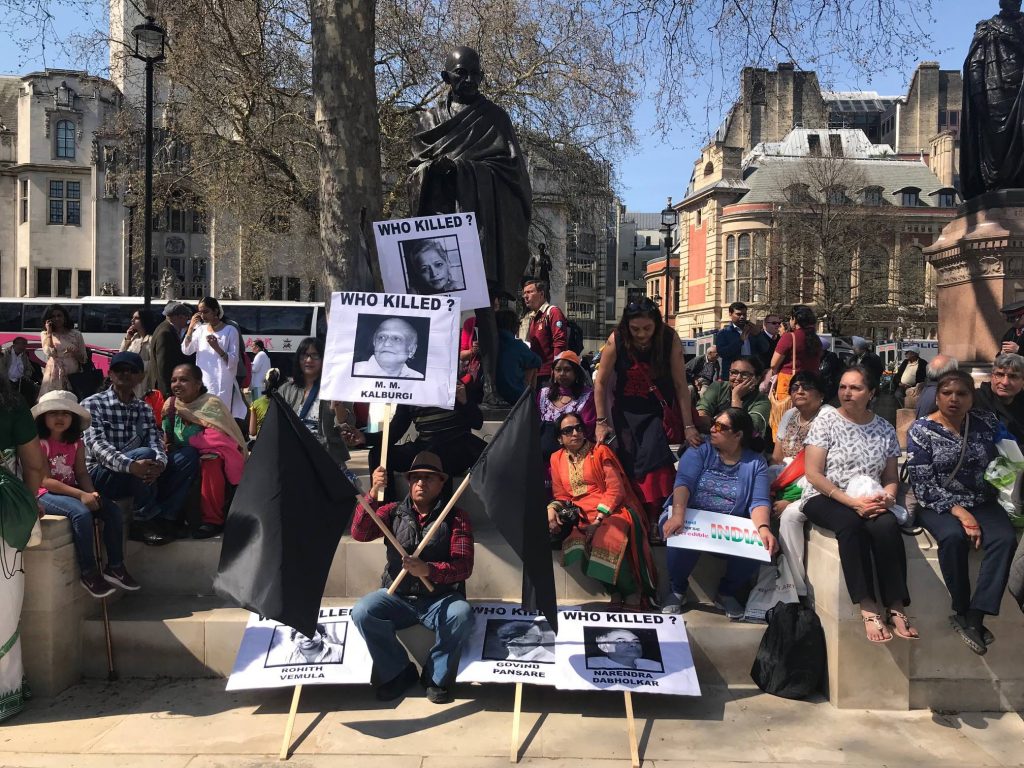 Coaches brought in over a thousand Sikhs from gurudwaras in Birmingham, Coventry, Wolverhampton, Slough and Southall, and they were clearly the largest group protesting against Modi. “Modi is a butcher, a terrorist,” said Love Sunder Singh Dalewal from the Sikh Federation UK, who had organised these protests.

While a Tamil group protested against government policies in the region, two women couldn’t stop singing Modi’s praises. “Modi has brought in many changes in the country. We are proud of him,” said Ansuya Gorasia. “We did not come last time Modiji was here. So we made sure we are here today to show our support,” said Jasoda Wagjiani.

A couple originally from Jammu that has been living in London for several years now said, “We have been living for 70 years in a war-like situation and we want it to be resolved. We want peace and harmony in the most beautiful country in India,” said Lalit Sharma. “We are very confident that Modiji can resolve it. We love him,” added Sana Sharma. 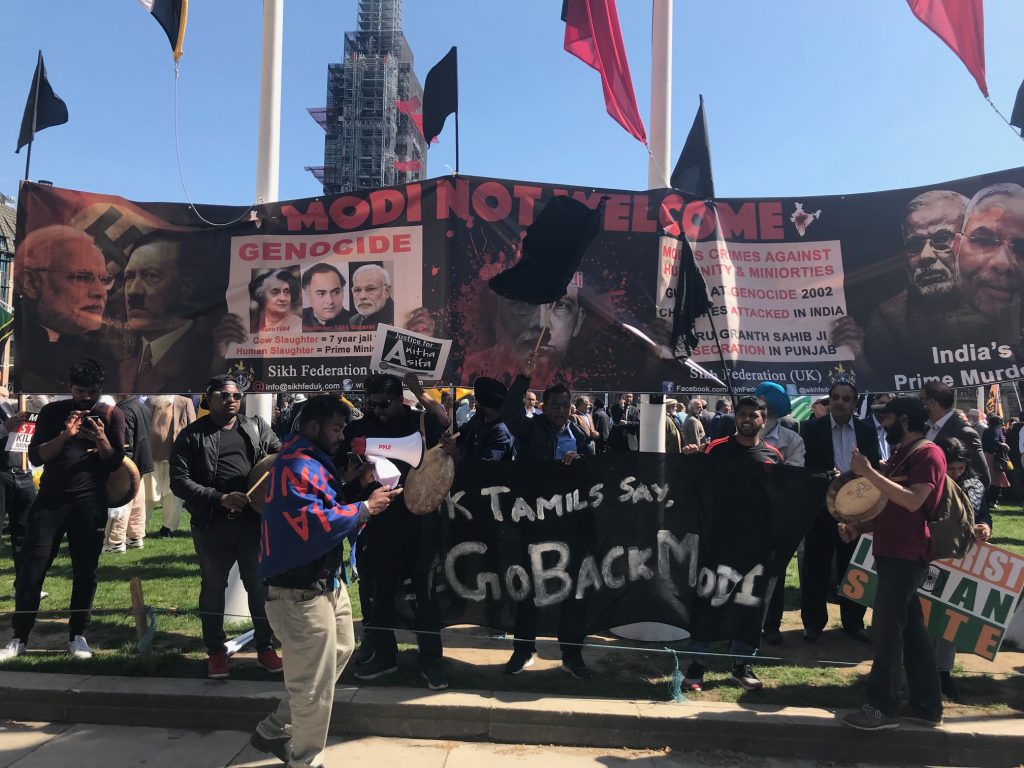 Some Kashmiri groups staged their protests against Modi both through presentations and through letters to the foreign secretary. The gangrape and murder of the girl in Kathua was picked up by many to make their point that “religious fanaticism displayed in the behaviour by these communal elements has threatened the peace and harmony of the region,” according to Javid Kakroo, a Kashmiri community activist.

A group of ‘Beti Bachao, Beti Padhao (Save Girls, Educate Girls)’ campaigners, primarily from the vast Gujarati diaspora in Britain, were full of praise for Modi.

“The message ‘save the girl child’ is close to my heart. It’s been perceived that Indian women are not active in adventure activities, and I am keen to break that perception through my journey,” said Bharulata Patel-Kamble, solo car driver.

Flash mobs broke out dancing to the song of ‘Indiawala’ and many, dressed in traditional attire, proudly stood in support of Modi. The Indian Ladies in London group created a box wherein people could submit questions which they hoped to ask the prime minister during his visit. Hundreds of people have responded with questions in person and on social media over the past month. “We want better lives for women and we believe Modi can do that in India,” said Uma Parvati of the group.

Another women’s group that stood in white in solidarity with the brutalised child and other rape victims told The Wire, “Women, strangers and friends from all walks of life, all age groups put up a poignant protest against the recent upsurge of rapes of little girls in India. The protest was apolitical and the women stood strong in their silence,” said Nabanita Sircar, a journalist protesting.

The prime minister, on his part, addressed the recent incidents of rapes of minor girls in India at the ‘Bharat Ki Baat, Sabke Saath’ programme held the same day at the iconic Central Hall Westminster here.

Modi called violence against women an evil of not just the individual but also of society. He said, “we always ask our daughters about what they are doing, where they are going. We must ask our sons too. The person who is committing these crimes is also someone’s son. He has a mother too in his house.”

Modi also took a dig at the previous governments and said days of incremental change are over and Indians have become more and more aspirational under the BJP-led government at the Centre. He added that people have more expectations from his government because they know that it can deliver.

“People know that when they say something, the government will listen and do it. Days of incremental change are over,” Modi said, responding to a series of questions anchored by Prasoon Joshi, chairman of the Central Board of Film Certification.

On his government’s criticism by opposition parties, Modi said his problem is not with criticism. “To criticise, one has to research and find proper facts. Sadly, it does not happen now. What happens instead is allegations,” he said.

“I want this government to be criticised. Criticism makes democracy strong. Democracy cannot succeed without constructive criticism,” he added.

Ruhi Khan is a journalist and social scientist based in London. She tweets @khanruhi