The notion that China respects power is correct but the show of power cannot be displayed through senseless acts.

The Indian government’s advisory note to its officials to stay away from the Dalai Lama’s events has caused disappointment to the Central Tibetan Administration (CTA) and embarrassment to the Tibetan spiritual leader personally and has evoked predictable and undue criticism from the usual quarters. They argue that it is imprudent for India to give up the ‘Tibet card’ and cave in to China’s bullying tactics when the payoff from Beijing is unsure. At the same time, there are also counter voices on social media calling for the Modi administration to abandon this ‘card’ and put the interests of 1.2 billion Indians first.

This debate begs over New Delhi’s latests tactics begs a more fundamental question: What is this the so-called ‘Tibet card’ that India can play in order to harvest a big diplomatic payoff?

The fact is that there was never a card from day one. India was left with no choice in the matter after the Tibetans themselves relinquished their wish for independence by signing the 17-point agreement with China on May 23, 1951. It was only after their explicit decision to join China that India accepted Tibet as a part of China – on April 29, 1954.

India has never changed its stand since then, not even during the 1962 conflict. On June 23, 2003, the Vajpayee government endorsed Beijing’s new formulation of recognising the ‘Tibet Autonomous Region (TAR) as a part of China’. In return, when Wen Jiabao visited India in April 2005, China formally accepted that Sikkim is a part of India. As such, Tibet remained a settled matter. Not only has India been reiterating this position but it also pledged “not to allow Tibetans to engage in anti-China political activities in India”.

Third, Tibetan irridentism has remained an abiding concern for India. It would surprise many that barely two months after India’s independence, the Tibetan Bureau in Lhasa sent two shocking telegrams (dated October 16, 1947) asking independent India to return the alleged (lost) territories of Tibet including  Sayul, Walong, Lonag, Lapa, Mon, Bhutan, Sikkim, Darjeeling, Lowo, Ladakh etc. In essence, Tibet was claiming its boundary down to the line of the river Ganges. Not surprisingly, Jawaharlal Nehru explicitly rejected this demand.

On top of that, in 1947, Tibet didn’t accept India’s call for ratifying the 1914 Simla Convention or the McMahon Line Treaty and even refused to send an official delegation to attend India’s first Independence Day celebrations. This prompted Nehru to clarify on December 6, 1950 that “he was not interested in challenging China’s suzerainty over Tibet”.

However, these missteps by the Tibetan side gave a handle to Mao Zedong to say later that “Xizang (Tibet) is China’s right hand palm, which is detached from its five fingers” – of Ladakh, Nepal, Sikkim, Bhutan and Arunachal. “It is China’s responsibility to ‘liberate’ the five to be re-joined with Tibet”.

Fourth, those insisting on playing the ‘Tibet card’ should know that it was the Sino-Tibetan irredentist assertion that prompted India to hold back from pushing the Tibet agenda both at home and at global forums. If anything, Indian manoeuvring may well have worked to ensure that any attempt in the UN by the Tibetans to raise the Tibet question never proceeded beyond the preliminaries.

Attempts to alter India’s Tibet policy started with the dramatic move to have CTA head Lobzang Sangay’s presence at Narendra Modi’s swearing-in ceremony as prime minister along with the heads of SAARC States on May 26, 2014. The tendency to play the ‘Tibet card’ has only increased since then, in spite of Modi not appearing to be very inclined in its favour. 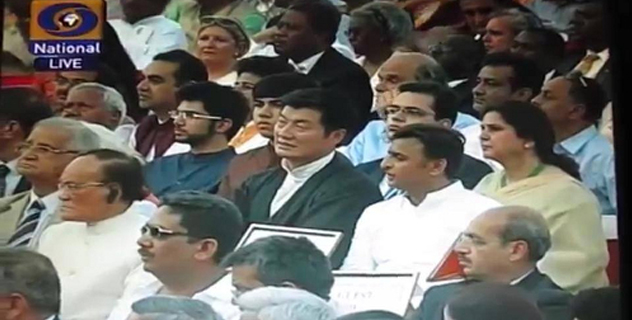 The Ministry of External Affairs denies having any ‘Tibet card’ but other organs of government can be seen going out of their way to  involve the Dalai Lama in official events, including the one at Rashtrapati Bhavan in December 2016. This was in stark contrast to the past practice of avoiding his interface with high officials. In 2016, Dharamsala was allowed to hold an ‘interethnic conference’ with Uyghur and Chinese dissenters participating in it.

The popular perception is that India is using the Dalai Lama simply as a pressure point to settle scores with China – to retaliate for the way Beijing has blocked the listing of Masood Azhar on the UN terror list, prevented India’s entry to the Nuclear Suppliers Group and pressed ahead with the China-Pakistan Economic Corridor (CPEC) project in Pakistan-occupied Kashmir. The well-informed journalist Jyoti Malhotra hinted last year how Indian policy makers were desperate to make full use of the Dalai “asset” before he is no more – a point “vulgarly described” in security circles. A Tibetan exile carries her child as she walks toward the Tsuglagkhang temple in Dharamsala. Credit: Reuters

Although the Dalai Lama denies he is being used in this manner, he did make a visit to Tawang in April last year where Kiren Rijiju, the minister of state for home affairs, escorted him like a virtual minister-in-waiting. The event was hailed as a big feat, hitting China where it hurts in some sort of a diplomatic “surgical strike”. Another high point was the absolute historical blunder of letting Lobsang Sangay, president of the Tibetan ‘government-in-exile’, unfurl the Tibetan national flag at the strategic Pangong Lake in Ladakh. India is likely to pay a price for such an amateur decision being taken by the government without adequate understanding.

Upset with this turn of events, Beijing issued a stern warning of “negative consequences” on the boundary settlement, and on bilateral ties in general. Two months later, the Indian army intercepted road-laying efforts by the People’s Liberation Army (PLA) in the Doklam plateau, leading to a military standoff that lasted for 73 days. Everything that has happened since is well known.

Whether playing the Dalai card yielded any results is hard to tell, but this time around the government may have averted Doklam 2.0 by stopping the Dalai Lama’s 10-day visit to sensitive Sikkim in March.

One thing is clear – the Tibet lobby has a good track record of ensnaring India in its murky agenda, often at India’s cost. In that sense, India-China ties are driven more by the interests of Tibetan exiles than by India’s own national interest.

The CTA’s “Thank You India 2018″ campaign is possibly yet another cynical ploy to draw India into the exiles’ next big agenda – the reincarnation process of the Dalai Lama. Sangay has just hinted about discussions starting on the issue soon. The CTA wants to build a fresh case that the search for the Dalai’s soul is India’s problem as well. They could even rope in the Mongol clergy for this. To be sure, any Indian interference on this question would risk prolonging hostility with China for another generation. Foreign secretary Vijay Gokhale may have just managed to nip that agenda in the bud before India-China relations could be subverted further.

The current turn of events also comes against the recent affirmation of Xi Jinping as ‘life-time president’ in China. Both Xi and the Dalai seem to want a resolution of their differences and to start with, the Dalai Lama may possibly make a short trip to China in the near future. He is now more vocal on his willingness to follow the “One China” policy and “stay with China”. In that case, the bargaining process with Beijing could start soon.

It is against this backdrop that the MEA wants to pursue a policy of ‘quiet diplomacy’ with China. It wants to carefully weigh the ‘Tibet card’ – its utility, sustainability, costs and benefits–  vis-à-vis the need for opening a new page with China. But, to be sure, other operatives may derail the government’s plans.

All in all, the Dalai Lama and the ‘Tibet card’ are Cold-War era relics. The issue has been kept alive for almost six decades due mainly to the games being played, mostly on behest of Western powers. The Dalai and Tibet ‘cards’  have not served any deterrent value for India; rather they have  prolonged mutual suspicion and hostility.

The notion that China respects power is correct but the show of power cannot be displayed through senseless acts. The Chinese media called India’s use of the Dalai card ‘tactless’ and they aren’t off the mark. Instead of being driven by romantic ideas or half-baked strategic fantasies, an aspiring great power like India should have a policy based on geopolitical realism.

Playing the ‘Tibet card’ becomes an exercise in folly especially when the Dalai himself doesn’t want independence. Those who insist on having and using such a ‘card’ should know that the only residual issue, if any, is the retrieval of India’s own lost territories, including Aksai Chin and Menser near Kailash–Manasarvar, from Sino-Tibetan occupation. Instead of investing so much on the CTA’s agenda, they should ask the Dalai Lama to make an explicit statement – while he is still alive – that Tawang as well as the areas around Kailash Mansarovar have historically been part of India.

P. Stobdan, a former Indian ambassador to Kyrgyzstan, is an expert on Himalayan and Inner Asian affairs.