Menon: The Policy of No First Use of Nuclear Weapons Has Served India's Purpose 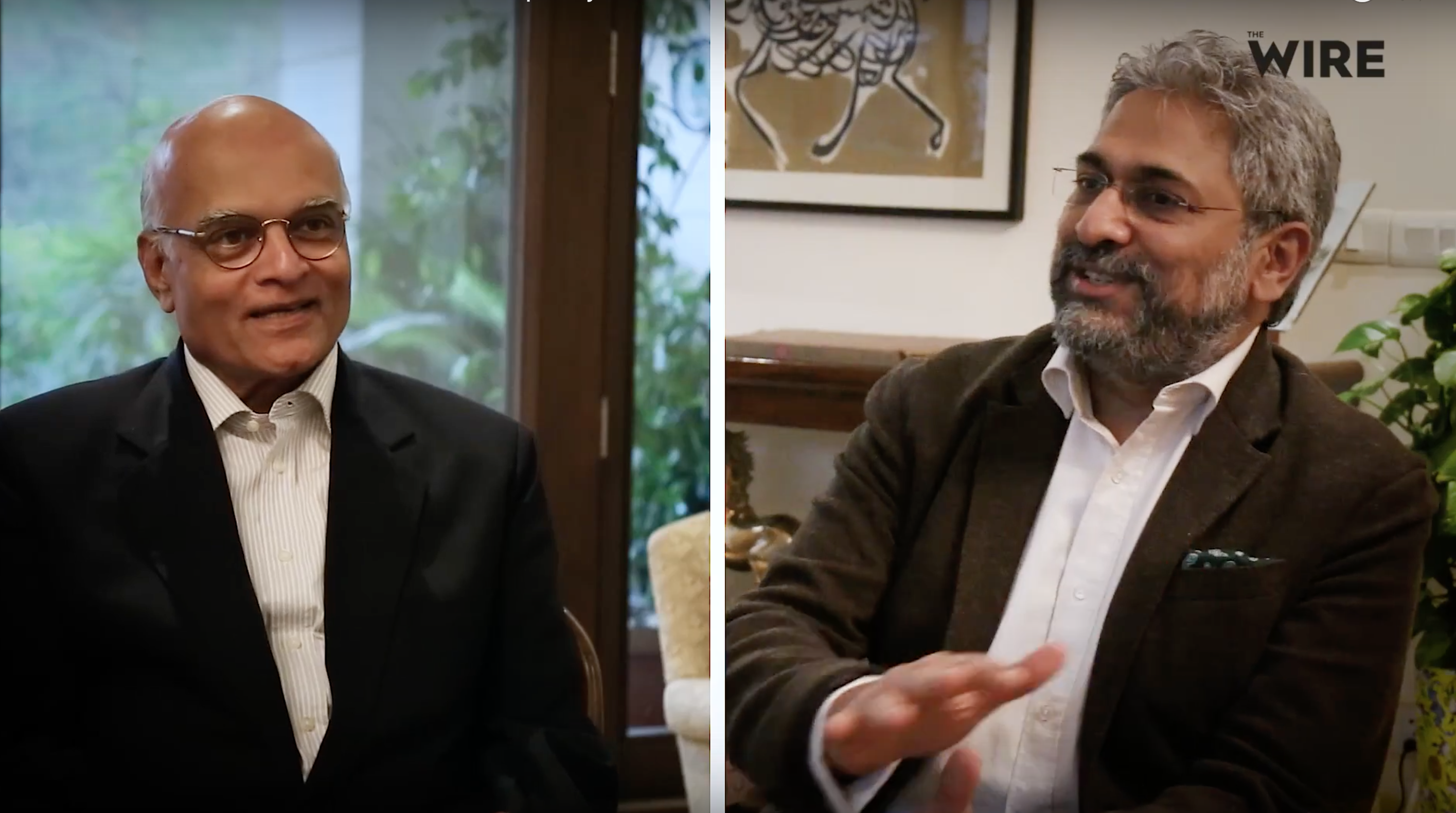 You can watch the video above or read the transcript:

Siddharth Varadarajan: Hello and welcome to this special discussion that The Wire is bringing you on the former national security advisor and the former foreign secretary of India Mr. Shivshankar Menon’s new book, Choices. It’s quite rare for a former Indian foreign secretary or indeed a former policy maker at the highest level to write about issues that he/she dealt with at the time that they were officials. And, it’s perhaps even more rare that this kind of writing takes place in such a lucid fashion. Shivshankar Menon, thank you very much for joining us for this chat.

SV: You have wisely chosen to avoid writing the definitive book on Indian foreign policy from 1947 to the present but instead you’ve chosen a more conservative approach, I would say, a practical approach, where you have drilled deep into a limited number of questions, five in particular, that you dealt with in one way or the other during your time as a foreign service officer, and of course as foreign secretary and NSA. And, you have in a sense analysed each of these situations from the point of view of the kind of choices that India was confronted with, and the wisdom or otherwise of the choices that it made.

With China, you focused on the negotiation of the border peace and tranquility agreement, but of course, there are wider ruminations about India-China. You’ve looked at the civil nuclear initiative with the United States, and at India Pakistan relations in particular, the dilemma of how to respond to continuing acts of cross border terrorism. You have looked at the India-Sri Lanka relationship, and in particular the very violent end game, where the LTTE was finally militarily defeated by the Sri Lankan army; and, finally an issue dealing with nuclear weapons – which is India’s no-first-use policy, and the rationale for that. I would like to try to go to a greater or lesser extent on each of these topics, but, let me start with the fundamental premise of your book – that you chose to write on issues that you had first hand knowledge of, but the one topic where, at least going by the public record, most of the major decisions were taken before you were NSA, which is the Indian policy of No First Use (NFU), that we will not be the first to ever use nuclear weapons.

Of course, there is a nuclear doctrine which was first drafted by the National Security Advisory Board shortly after India declared itself a nuclear weapons state, in 1999 it was drafted and then officially adopted with some modifications, when Brajesh Mishra was NSA in 2003. Now, I’m sure that as NSA you would have dealt with questions, clarifications, challenges, perhaps even disquiet among different levels of Indian stake holders on why we have this policy and it’s perhaps why you’ve chosen to write about it in the book. It’s brilliantly timed for as we speak, NFU has come back into the debate with the raksha mantra, Manohar Parrikar, in a way suggesting that perhaps this needs to be reviewed. Why are you such a strong advocate of NFU? Why do you think it’s so central to India’s position as a nuclear weapon state?

Menon: I made the argument that every review so far – and it has been reviewed thrice, since 2003 – has shown that it actually serves India’s interests.

SV: What prompted those reviews?

Menon: It’s natural. Actually, I don’t think say in the book that it’s cast in stone. In fact, what I argue for is that it is today the best policy but that we need to keep reviewing it because developments around us will keep changing, and what we are dealing with here is a change in environment within which we make this decision. So it’s a policy, that, like all policies, needs to be adjusted to reality, and to the circumstances in which you apply [it]. But so far I think it’s served our purposes, because for us, nuclear weapons are not war-fighting weapons.

SV: Could you elaborate on those instances

Menon: Fortunately, it never changed our actual behavior because we had strong leadership and strong minded leadership. In 1971, when the [USS] Enterprise came during the Bangladesh war. Again in the early ‘90s, when there was tension on the line [of control] with Pakistan.

SV: And you believe, like most analysts, that Pakistan already was nuclear …

Menon: No, you see, whether they had it or not, I think Pakistan has always exaggerated its capabilities, and wanted you to believe that she has more. And normally, she announces capabilities before she actually has them, and that’s been a repetitive pattern.
But can any leadership take the chance on calling that bluff even if you want to? And for Pakistan, these are war-fighting weapons. It’s built into their doctrine. They actually exercise and practice – the Pakistan military. It’s also the only nuclear weapons program which is entirely under military control in the world. It’s the only one of its kind.

SV: Khalid Kidwai, the former strategic plans boss, has actually elaborated the specific conditions under which Pakistan would consider first use.

Menon: They have tried, I think, to use the weapons to try and lower the threshold for conventional war consistently. So it’s important that we keep reviewing [NFU] but so far I think it’s actually served our purpose.

SV: If you are convinced that nuclear weapons are not war fighting instruments – NFU envisages retaliation but never initiating a nuclear conflict, because if it’s not a war fighting instrument then you wouldn’t want to ever think of using it first – under what circumstances, changed circumstances, could you think of India moving away from NFU? Because what is pushing the Indian debate right now is this idea that Pakistan has developed, and officially says so, tactical nuclear weapons.

Menon: In our situation, frankly, I don’t see the distinction between tactical and [strategic]. And, what’s the difference?

SV: Because of geographic proximity?

Menon: Because this is not the Cold War. Because we’re next to each other with three-minute launch warnings, [so] what is tactical? Lahore is, what, 40 kilometers from the border? Amritsar – huge population concentrations. And if you look at the effects of these nuclear weapons, the use of nuclear weapons anywhere along the line, it’s going to be on both sides of the line. It’s not going to respect borders and some how say, because I’m an Indian weapon, it won’t affect Indian lives, and so on.

So for me, this distinction, frankly, is relatively meaningless. Any use of nuclear weapons in our situation is going to be devastating –

SV: Regardless of scale?

Menon: Regardless. Scale, any way, for nuclear weapons is relatively large. So, I think you have to therefore think of it slightly differently. Retaliation for us – we’ve laid down quite clearly the conditions under which we would use them. And I think we’ve made that quite clear in the doctrine. We are, in fact, one of the first countries to be so clear and one of the quickest off the mark in terms of declaring a doctrine.  And we have so far matched that in terms of our posture, in terms of what we do.

SV: In your book, you talk about the impact of the so called “cold start” doctrine, or the propaganda around ‘cold start’ as being an important factor in Pakistan’s own thinking. The modification of the [Indian] nuclear doctrine that took place when it was officially declared had a few small but significant changes, one of which was that an attack on Indian forces anywhere [would invite retaliation]. And, the presumption is that this means ‘Indian forces outside of India’s borders’, because an attack on India would automatically trigger retaliation. Was that change in some sense to alert any possible adversary that so called smaller nukes or tactical nukes, would invite the catastrophic response that a “regular” nuclear attack would?

Menon: I think it’s quite clear that no matter what the scale, any nuclear attack will be met with retaliation, and the retaliation will be big.

SV: So the critics then say, how credible is that? Because if you’re trading an attack on a [military] column that serves a “tactical purpose” for Pakistan, say with the annihilation of an entire country, is that the kind of decision that an NSA could possibly make, or the PM, as head of the Nuclear Command Authority?

Menon: I think it’s a decision that the initiator of the first strike has to take, which means it’s not the Indian prime minister’s decision. Whoever actually takes the decision to launch that first strike would have already taken that decision.

Now, to say is it credible or not – this is like saying ‘when did you stop beating your wife?’ You will only know it’s not credible if deterrence fails. In which case, frankly, there’s not going to be any winners or losers from a nuclear war. There’s only losers.  And so, I don’t think that’s the right question. Question is: have you done everything possible to make that deterrence credible? And I think yes, we have, which is why we have a triad, which is why we do everything we do to make it survivable, which is why I think the certainty of it has been consistently reiterated by every successive government no matter what their political composition.