Why India Needs to Be on the International Continental Shelf Commission

In light of India's disputes with Myanmar, Sri Lanka and Bangladesh, the decision to not nominate a member for the UN's Commission on the Limits of the Continental Shelf may have significant strategic consequences. 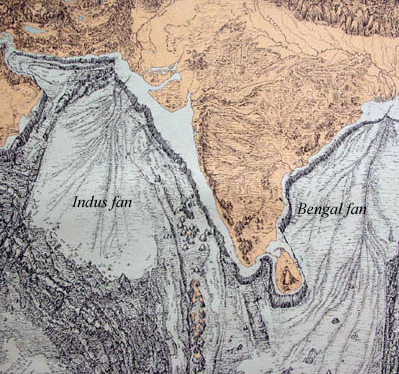 As a major coastal state with big stakes in global ocean governance, India’s decision to not nominate a candidate for the UN Commission on the Limits of the Continental Shelf (CLCS) runs counter to its strategic interests.

India, like other countries, has an interest in determining the limits of its continental shelf in such a way that it maximises the area of the seabed near its coastline that it alone will be allowed to exploit for commercial purposes.

The United Nations Convention on Law of the Sea (UNCLOS)  creates a regime of governance for maritime zones that fall under national jurisdiction – namely the territorial sea, contiguous zone, exclusive economic zone (EEZ) and continental shelf. A country’s territorial waters extend 12 nautical miles from its coastal baseline and its EEZ up to 200 nm. A coastal state also has exclusive economic rights to the first 200 nm of its continental shelf – the sloping seabed that forms part of the natural geological prolongation of its land mass. States can lay claim to an extended continental shelf by making a geological submission to the CLCS, up to a maximum distance of 350 nm from its coastal baseline. 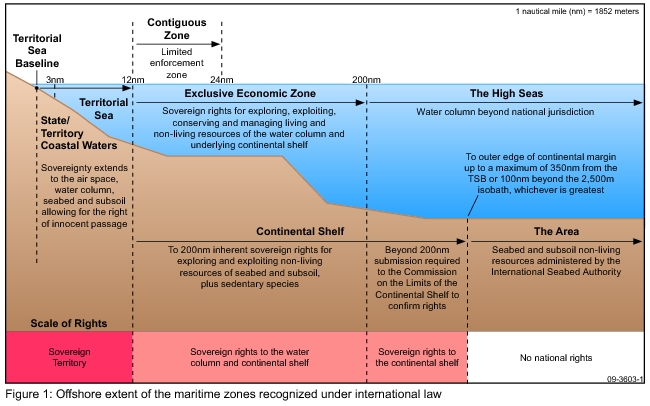 Illustration of maritime zones defined by the UN Convention on the Law of the Sea. Credit: noaa.gov

India played a constructive role in deliberations leading to UNCLOS’s adoption in 1982 and has been a party to to convention since 1995. The country shares maritime boundaries with Pakistan, the Maldives, Sri Lanka, Indonesia, Thailand, Myanmar and Bangladesh. Many of these boundaries are such that there are overlapping claims, especially when it comes to the extended continental shelf.  Since a coastal state has exclusive jurisdiction to commercially exploit the continental shelf for metallic ore, non-metallic ore and hydrocarbon extractions, opportune and accurate strategic measures will not only safeguard India’s maritime boundaries, but can also reap benefits beyond expectation. India has invested heavily in exploring non-living resources in deep international waters for polymetallic nodules, cobalt crust and hydrothermal sulphides. More and more hydrocarbon resources are being discovered worldwide in deeper parts of the continental shelf.

In terms of institutions, UNCLOS created the Hamburg-based International Tribunal for the Law of the Sea (ITLOS), the Kingston, Jamaica-headquartered International Seabed Authority (ISA) and the CLCS for global ocean governance.

ITLOS is tasked with the peaceful settlement of contentious issues submitted to it by member states while the CLCS is mandated to scientifically determine the maritime boundaries of states relating to the continental shelf. The ISA is designated to oversee exploitation of resources in the deep sea area.

India has always preferred to settle its disputes via the Permanent Court of Arbitration (PCA). It is the oldest and most prestigious dispute resolution body, established by the Convention for the Pacific Settlement of International Disputes, concluded at the Hague in 1899 during the first Hague Peace Conference. The PCA was the first permanent inter-governmental body created to resolve disputes peacefully through arbitration or other means.

UNCLOS also has provisions for determining the limits of the continental shelf and the CLCS was set up exclusively for this purpose. Being surrounded on three sides by oceans with a total coastal length of around 7,500 kilometres, India’s stake in the delineation of its continental shelf is very high.

While ITLOS requires experts in international law and maritime law to settle disputes between states and render advisory opinions on the law of the sea, the CLCS requires experts in the field of geology, geophysics or hydrography to scientifically determine the extent of the continental shelf by considering the scientific data and information submitted by a member state. The recommendation of the CLCS is binding and there is no provision for making an appeal. Only a revised submission can be made if the concerned state does not agree with the recommendations of the commission. However, once the settlement of the continental shelf is mutually done between state parties, it becomes conclusive and binding.

As a major Asian country, India has always considered it important to nominate a judge to ITLOS, though the fact that it is unlikely ever to submit a maritime dispute to the tribunal’s jurisdiction means ITLOS is quite irrelevant to concerns about national security and national boundaries.

More importantly, its own continental shelf boundaries and other maritime zones are in dispute. India is currently in dispute with Bangladesh, Myanmar and Sri Lanka to determine the extent of its continental shelf. India has already made a partial submission before the CLCS and filed replies to submissions made by other member states. The CLCS is likely to rule on India’s boundaries in the near future.

Indian state practice with respect to CLCS till now has conformed to India’s foreign policy as a prospective permanent member of the UN Security Council. UNCLOS came into force for India on July 29, 1995 and since then, the country has always found its place in the 21 member scientific panel constituted under the convention. The Indian nominees, selected by the Ministry of Earth Sciences, the nodal national ministry for delineation of the continental shelf, have been held in high esteem because of their scientific and technical expertise.

The secretary general of the UN, through a general letter to all states parties to UNCLOS, invited nominations to the CLCS and the last date for this was March 7, 2017. By not nominating any member to the CLCS this year, India has departed from its long standing practice since the establishment of the commission.

The Hindu last month quoted unidentified officials as saying the reason for this is that elections for a seat on ITLOS will be held around the same time and that India, which would like to send Neeru Chadha, a former head of the legal and treaties division of the Ministry of External Affairs, does not want to expend political capital lobbying for its nominee to the CLCS. If this is true, the reasoning is flawed because a country of India’s size should not have not make this kind of choice.

India can still nominate its candidate by citing unavoidable circumstances, as the present commission’s term ends on June 15, 2017. At this crucial juncture, when the Indian submission is pending before the commission, India cannot afford to lose its presence on the UN scientific panel and must uphold its interests in determining the extent of its continental shelf. As per the CLCS website, it would appear that the Indian submission is likely to come under the list of state parties whose submissions are due for consideration once the commission is reconstituted in June, after the 21 new members are elected.

Though CLCS members are nominated by their respective countries, each member functions as an independent expert in his or her own capacity. Such members, as also those belonging to neighbouring states with adjacent or opposite maritime boundaries, cannot form part of the sub-commission that is considering the submission of their country –  because of conflicts of interest. However, the presence of a member on the commission is always of strategic significance because such a member can advise the delegation of their country, whenever it comes to defend its submission before the CLCS, which is quite often.